The Nippon Bunraku project, which is sponsored by the Nippon Foundation, was launched to broadly publicize the appeal of bunraku, Japan’s classical puppet theater. Outdoor performances on a portable stage made from Japanese cypress showcase bunraku as it existed in the Edo period (1603–1868): the casual entertainment of commoners. 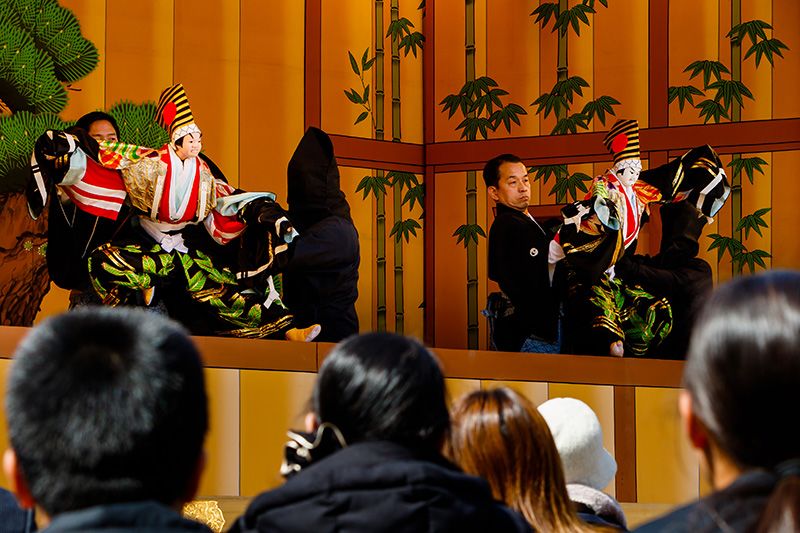 Outdoor Performances Bring Bunraku Back to Its Popular Roots 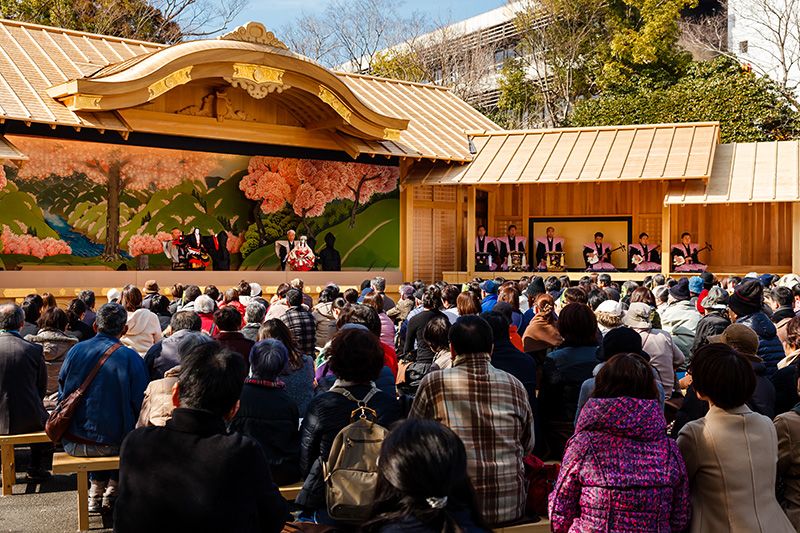 An Oneri Procession Publicizes the Appeal of Bunraku

Onlookers cried out “Beautiful!” and “Cute!” when bunraku puppets made their appearance in the town of Oharai, which leads to the entrance of the Inner Shrine of Ise, on March 10, 2017. This was the start of the oneri procession publicizing the performances. 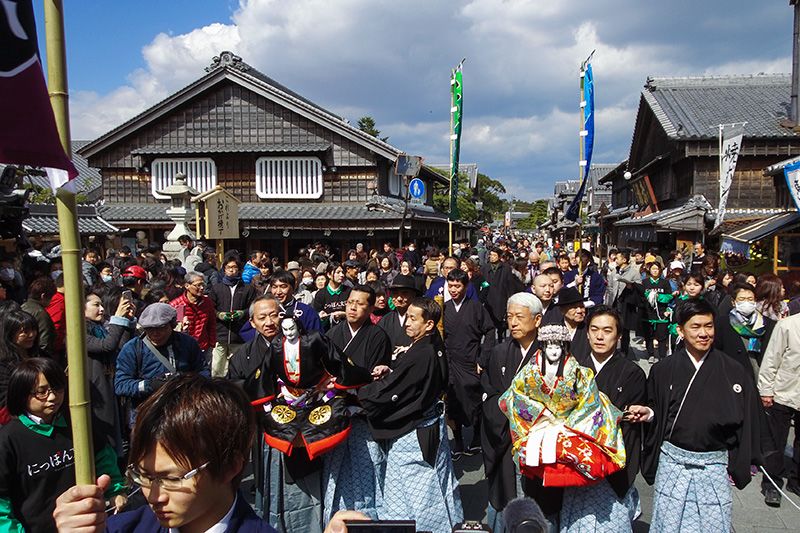 The start of the oneri procession at the entrance to Okage-Yokochō drew a large crowd of onlookers.

Led by Ise Onodo dancers, the lively procession of bunraku performers—tayū chanters, shamisen players, and puppeteers—and performance staff traveled the 400 meters from the starting point to Uji Bridge at the entrance of the Inner Shrine. 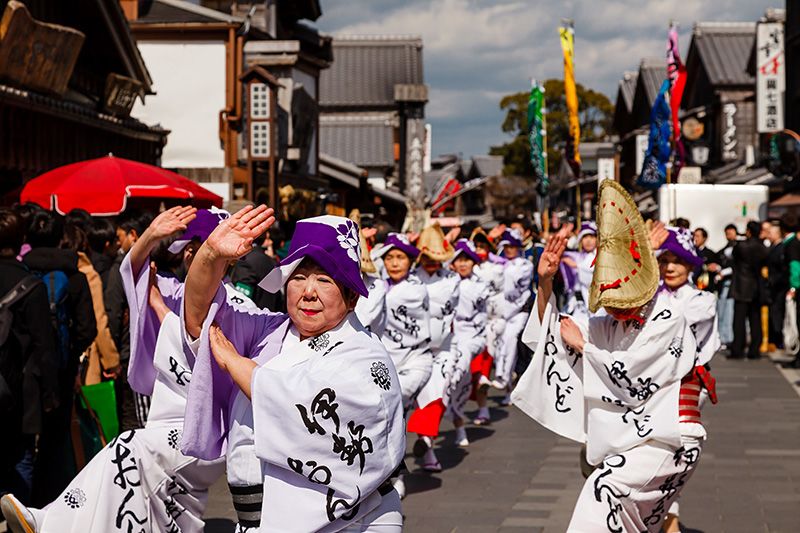 Leading the oneri procession were the song and dance of the Ise Ondo Hozon Kai (Ise Folk Dance Preservation Society).

Oneri are usually held to pray for the success of a kabuki performance and when a rakugo comic storyteller succeeds a hereditary stage names. Such public events are extremely rare for bunraku, but the Nippon Bunraku project has held two thus far—the first being the favorably received oneri that traveled along the shop-lined street leading to the temple Sensō-ji in Asakusa, Tokyo, in the autumn of 2016. 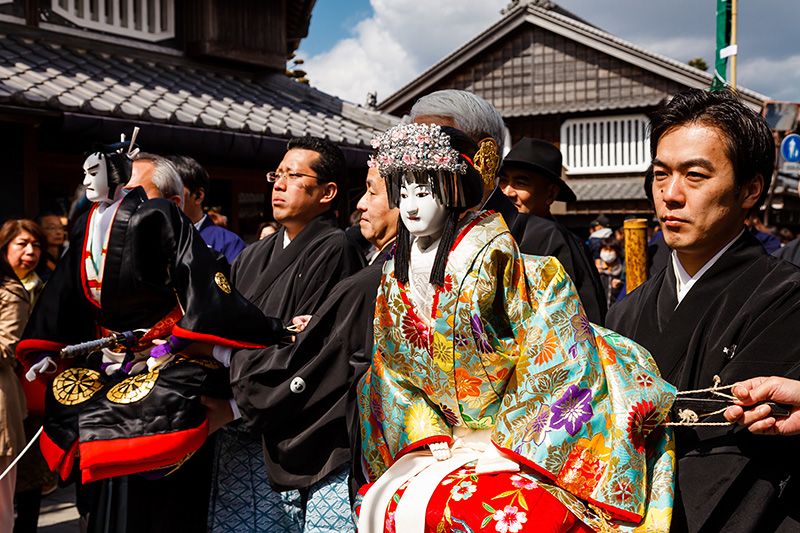 Onlookers exclaimed in delight at the bunraku puppets dressed in colorful costumes.

Visitors to Ise Shrine and local shopkeepers in Oharai were heard to remark, “I’ve never seen bunraku puppets before” and “Next time I want to see the puppets on a stage.” The oneri not only helped to publicize the upcoming performances but raised awareness about bunraku itself. 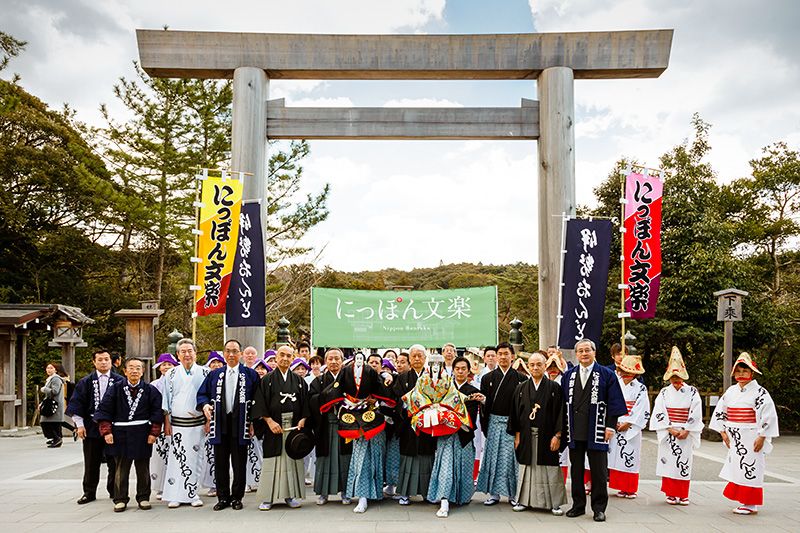 A group photograph in front of the large torii before Uji Bashi and the Inner Shrine.

Following the oneri, participants in the procession offered prayers in the inner courtyard (Mikakiuchi) of both the Inner and Outer Shrines. Toyotake Hanafusadayū, who succeeded to the stage name of Toyotake Rodayū VI in April, said, “It’s an honor of a lifetime to perform the gidayū narrative chant at the Ise Shrine, just as I was about to assume the illustrious name of Rodayū.” 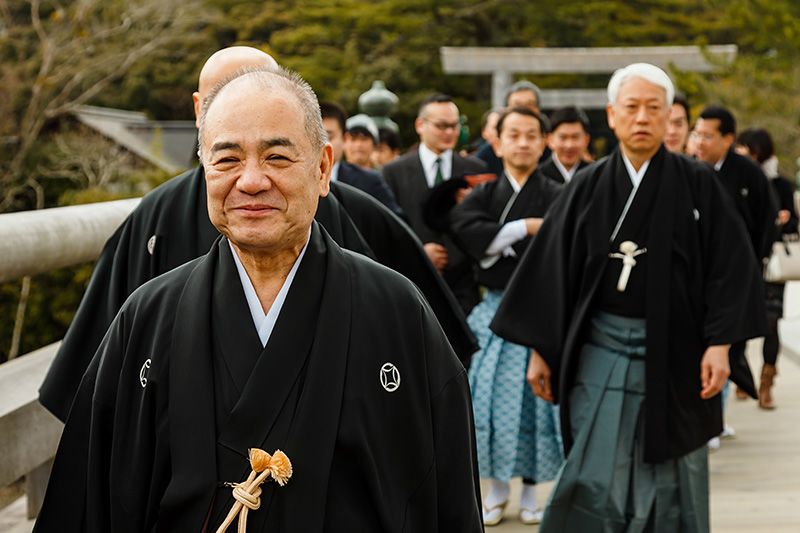 A portable stage, one of the noteworthy attractions of the Nippon Bunraku project, was set up at a parking lot just outside the Outer Shrine. As special dedicatory performances for the deities at Ise Shrine, Nippon Bunraku charged no admission, and seat reservations were allotted by lottery. 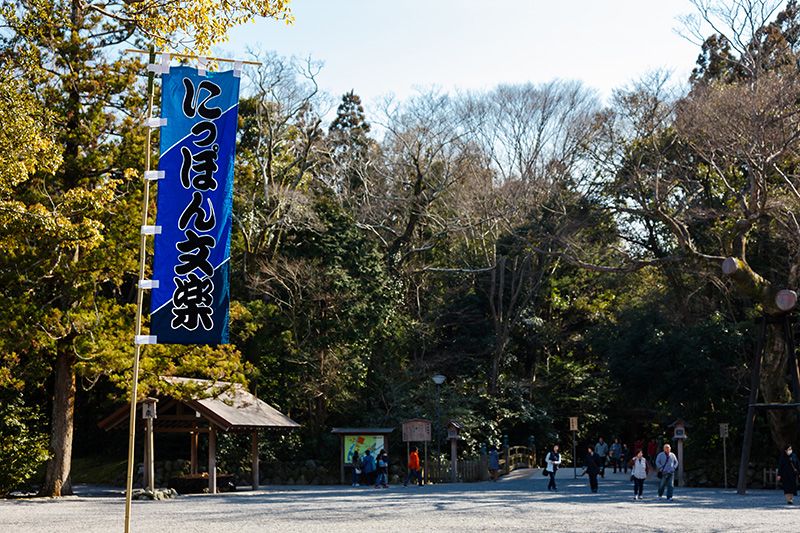 A Nippon Bunraku banner stands at the north entrance of the Outer Shrine.

To give a wider range of people the chance to enjoy bunraku, performances were made barrier free, and many users of care facilities and those with disabilities were invited. 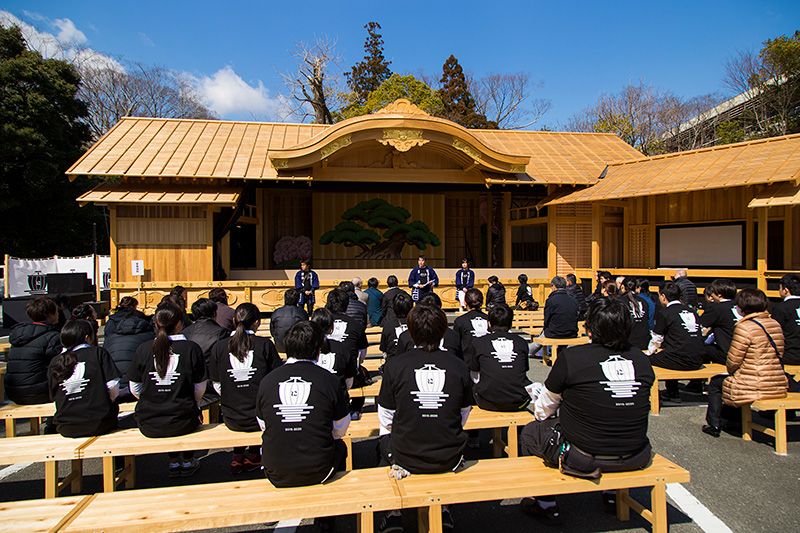 A staff meeting is held before a performance. Many volunteers participated, mostly students of the local Kōgakkan University.

During the performance, sign language interpretation and tablet computers displaying the narration in real time were made available to people with hearing impairments. Braille pamphlets and audio guides were distributed to people with visual impairments. Space was also provided so people in wheelchairs and their caregivers could sit together, and wheelchair-accessible multipurpose toilets were installed. 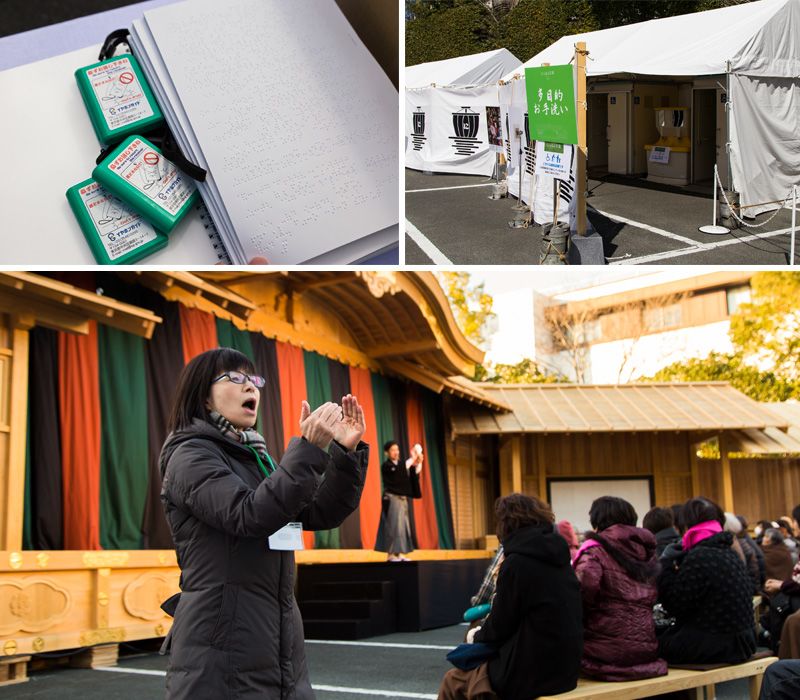 “The tablet computer made a big difference,” reported a man in his fifties with impaired hearing, “I could follow the story far better.” A woman in her forties commented, “Since information is displayed in a timely manner, I was able to understand each scene and enjoy the subtle gestures of the puppets.” 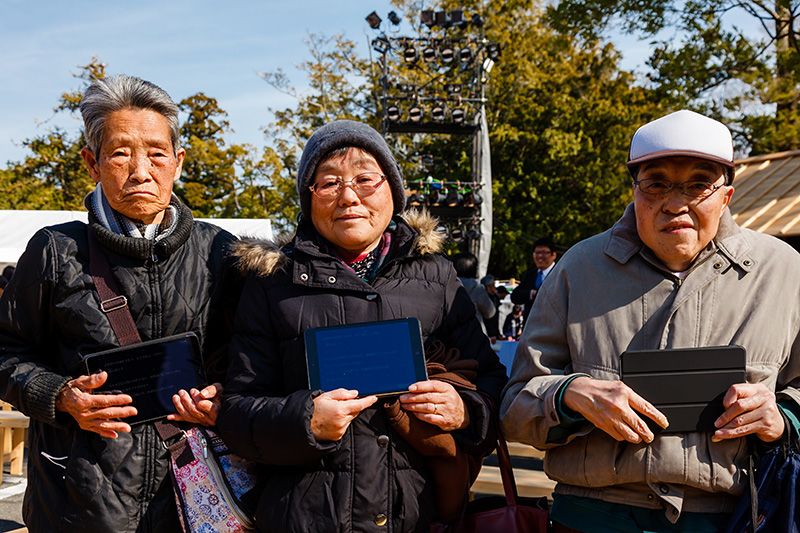 A man in his fifties with impaired vision cheerfully said, “The audio guide helped me understand what was taking place on stage. I enjoyed the chanting of the narrative, the sound of the shamisen, and the pleasant breeze in the open air.” 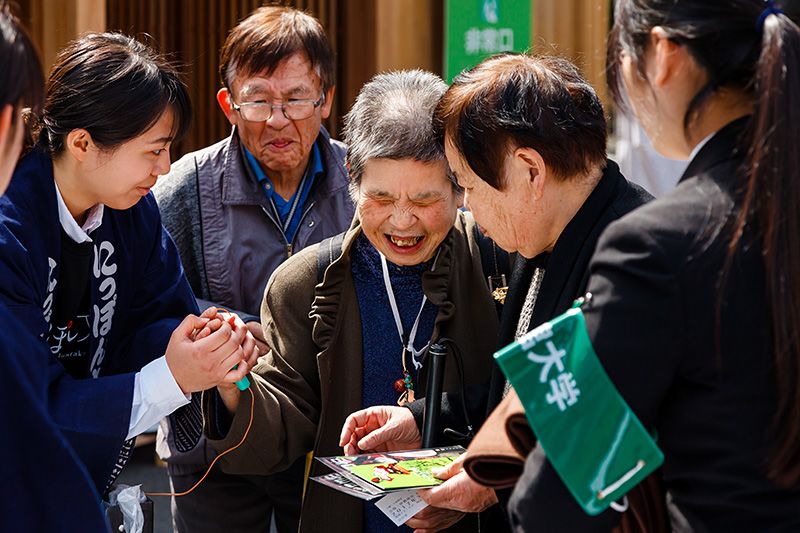 There were some people, though, who experienced inconveniences. One person commented, “The tablet computer was difficult to see in sunlight, and it would have been nice to have anti-glare protection.” While there may be some room for improvement, the barrier-free performances were, on the whole, quite successful. One proposal to further enhance access was to make the audio guides available to everyone in the audience. “When I gave the guide to my wife to try (who is not visually impaired), she said she’d like to have one, too,” one man said. “The guide makes it easier to follow the story, so it should be distributed to anyone who wants one, whether or not they have disabilities.” 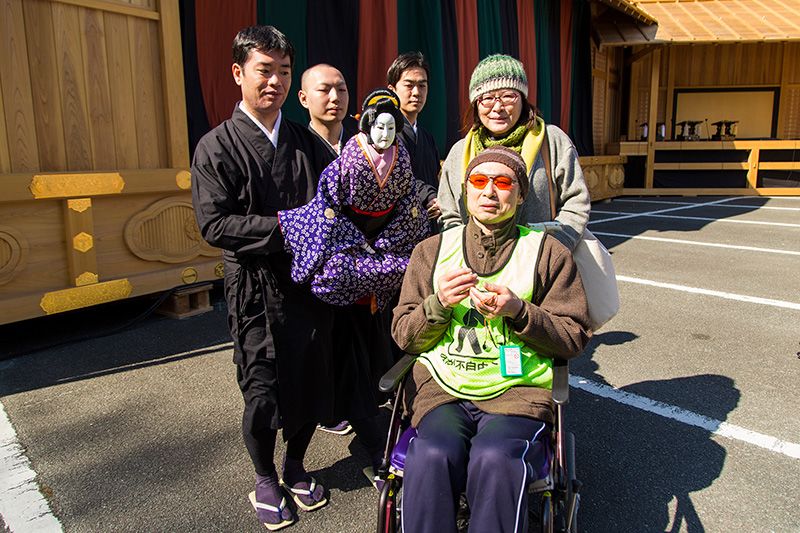 Visitors were invited to take photographs with bunraku puppets during the intermission.

Audio guides and text of the gidayū chant are usually not provided at bunraku theaters to encourage the audience to focus on the performance itself. “The audio guides at Ise didn’t give a full description of the story,” commented Enomoto Kaori, assistant producer of the Nippon Bunraku project. “Rather, they provided an abbreviated description of what is taking place on stage to supplement the experience of people with visual impairments. Members of the performance staff noted that the descriptions we gave were just enough and that they didn’t hinder people’s concentration nor interfere with the gidayū chant. I’d like to build on what we learned from these barrier-free performances to make bunraku more accessible for everyone.” 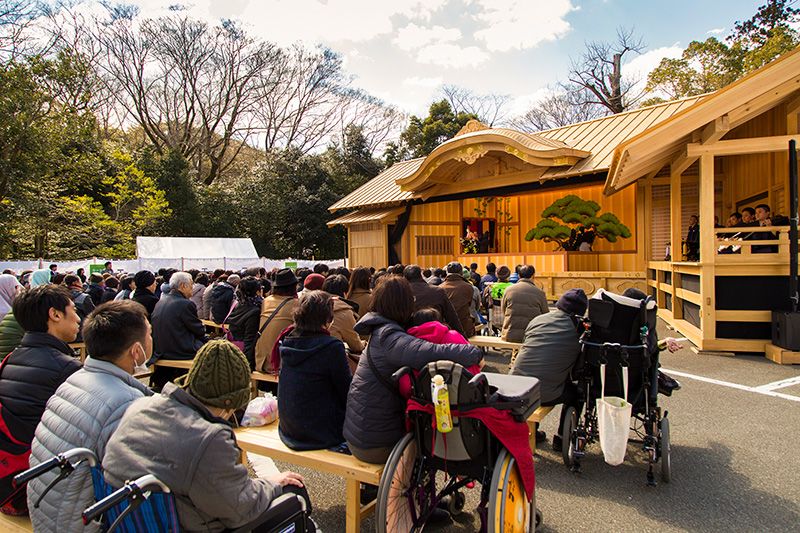 People in wheelchairs and their caregivers sitting side by side.

Bunraku is a stage art for both the eyes and ears, as it combines the dance of the puppets with the sounds of the chant. The performances at Ise Shrine confirmed that people, whether impaired in vision or hearing, can still experience the appeal of bunraku with proper support. 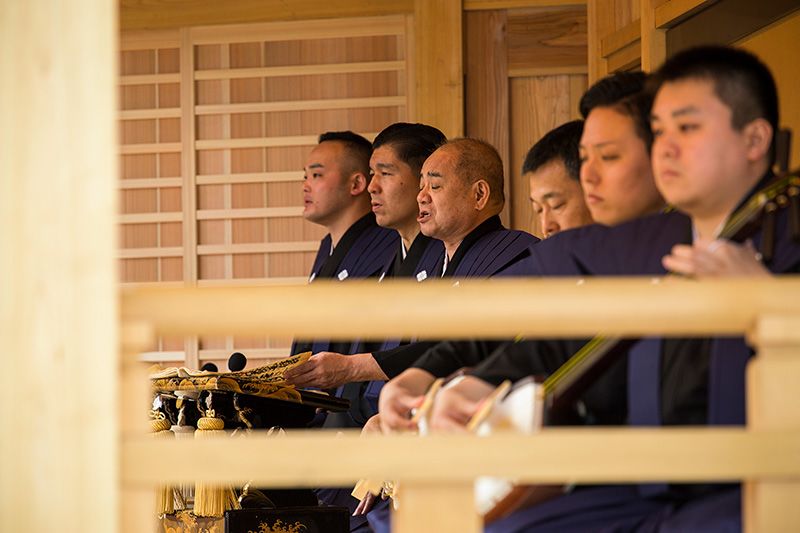 Nippon Bunraku will hold two bunraku performances annually until 2020, when the Olympic and Paralympic Games come to Tokyo. The project will publicize the appeal of bunraku to a broad audience through casual, outdoor performances and encourage such innovations as oneri and barrier-free performances. 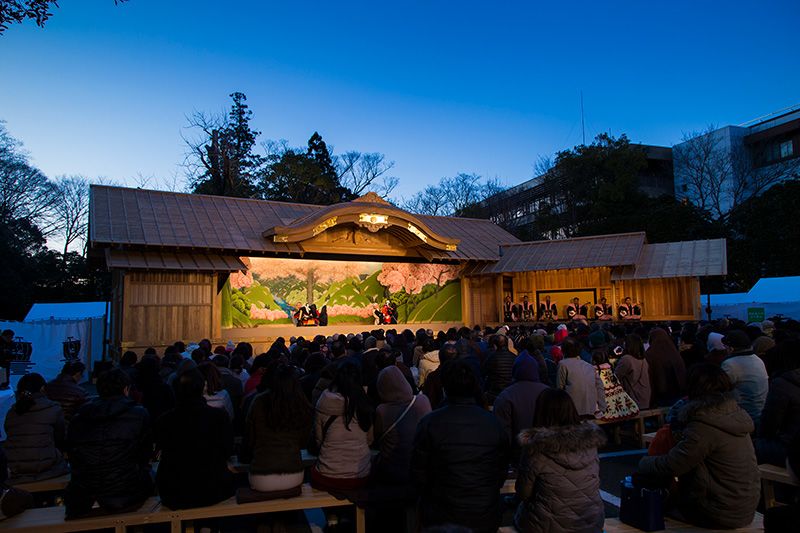 The stage is beautifully lit up in an evening performance.

(Originally published in Japanese on May 5, 2017. Photos by Miwa Noriaki and Nippon.com. Banner photo: Members of the association of bunraku performers and staff before the start of the oneri procession.)