Culture Sep 15, 2017
Ōkura Shōnosuke is a virtuoso ōtsuzumi drummer in the tradition-bound world of the nō theater, but he is also an innovative artist whose powerful, pulsating rhythms resonate with nature and with life itself. Nippon.com explores the allure of this creative genius who continues to innovate with tradition. 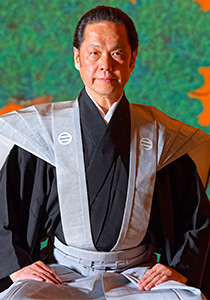 Nō musician. Born in 1955. Certified as a possessor of an important intangible cultural property. Is the eldest son of the grandmaster of the Ōkura school of kotsuzumi (shoulder drum) and ōtsuzumi (hip drum) nō musicians. Trained under his father and grandfather, first performing on stage at age nine. Became the first ōtsuzumi musician in nō’s history to perform in all plays of an Okina tsuki go-ryū go-ban nō—a 12-hour performance of five plays by the five schools of nō lead actors, preceded by Okina, an ancient, ritualistic play. Collaborates with an array of world artists as an ōtsuzumi soloist and was invited to present a solo performance for Pope John Paul II in the Vatican’s Apostolic Palace. Continues to give solo performances at ceremonies and events around the world. http://www.hiten-jp.com/

The piercing, high-pitched sound of Ōkura Shōnosuke’s ōtsuzumi hand drum has both an electrifying and calming effect on the listener. The drum consists of heads laced to an hourglass wooden body—a simple design that has remained unchanged for centuries. Yet it is capable of producing frequencies beyond the range of human hearing, exerting a profound healing effect, as if one were standing in a dense forest. Ōtsuzumi is one of the four instruments in the nō theater’s hayashi music ensemble. 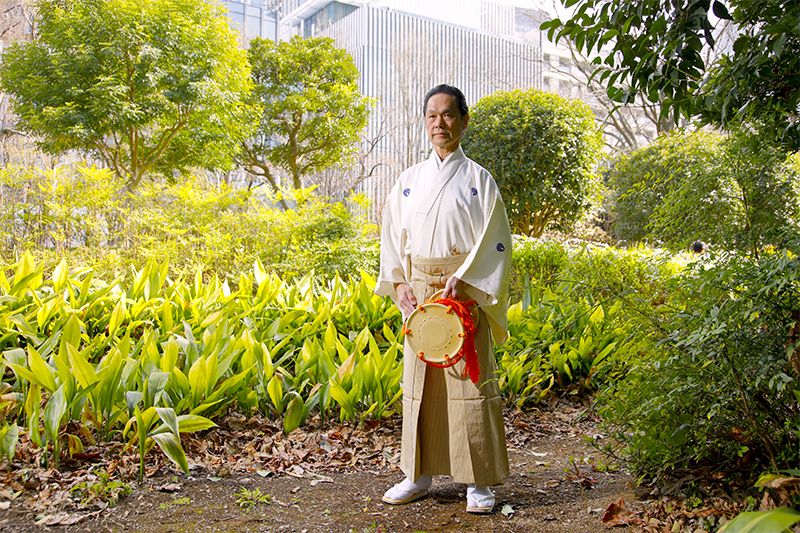 The pulse emanating from an ōtsuzumi’s cherry wood body and horsehide heads transcends space and time, echoing through the vastness of the cosmos itself.

From Tilling the Soil to a Unique World of Sound

Ōkura Shōnosuke, 62, has impeccable credentials as a top ōtsuzumi performer in the nō theater. He was born the eldest son of the head of the Ōkura school of ōtsuzumi (hip drum) and kotsuzumi (shoulder drum) musicians that has continued unbroken for 15 generations. And his mother was a daughter of a Kanze school shite (leading actor) performer. From an early age, Ōkura was trained by his father and grandfather, and he unquestioningly walked the path of a nō performer—a path determined by his birth.

Yet as the years passed, the young man gradually began to feel that the world of nō was—as he himself puts it today—“terribly old and musty.” At the age of 18, defying the furious opposition of all around him, he abruptly turned his back on performing arts and threw himself body and soul into organic agriculture.

“In spring, when the new leaves come out, the mountains and fields overflow with energy,” recounts Ōkura. “The energy purifies each cell in your body, and you can feel yourself brimming with power. When you’re close to nature and live as one with the Earth, you feel part of the world, not as an intellectual concept but as an irrefutable fact that you sense with your whole body.”

One night, about six year after he moved to the countryside, Ōkura played the ōtsuzumi that he had brought with him. “I had received a flood of ki (energy) from the universe and become one with heaven and earth,” he says of that incredible instant. “I felt great joy, as if I was reverberating with the heartbeat of the universe.” With this revelation, gained not with his mind but by toiling with his hands in the fields, he decided to return to the world of nō. The six long years he spent on the farm were not wasted, however, for they had taught him the inner “secret” of nō. 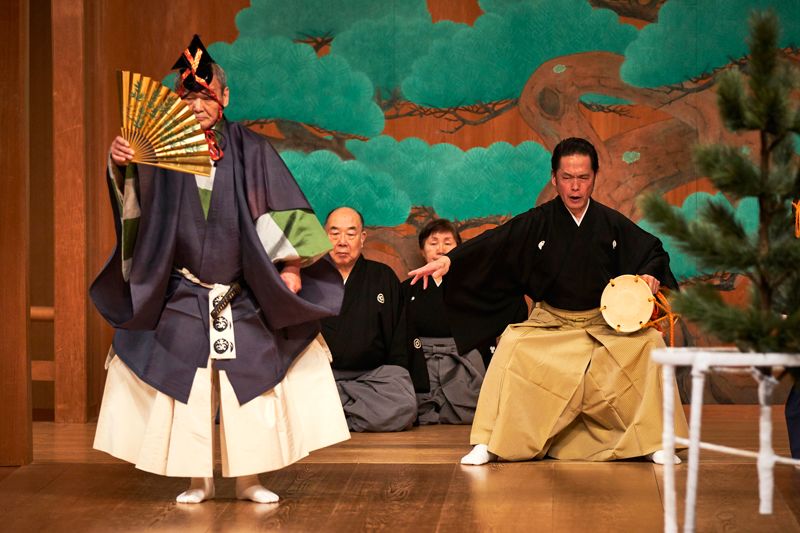 Ōkura plays the ōtsuzumi at the National Noh Theatre in Tokyo. (© Otome Kaita)

Prior to World War II, says Ōkura, most ōtsuzumi musicians played barehanded. But as the number of instrument makers plunged and the quality of hides available for drumheads deteriorated, it became customary to wear yubikawa thimbles made of deerskin on fingertips when performing—partly to extend the life of the heads and also to spare the hand, since the ōtsuzumi can be excruciatingly painful to play. Performers like Ōkura who continue to play without thimbles have become a distinct minority.

Getting the perfect sound from an ōtsuzumi requires gritting your teeth, locking your arm, and inflicting punishing damage to your body. Because Ōkura has always played with his bare hands, there was a period early in his career when the constant physical shock of striking the drum travelled up through his arm and shoulder, triggering swelling at the back of his head that almost caused a subarachnoid hemorrhage. 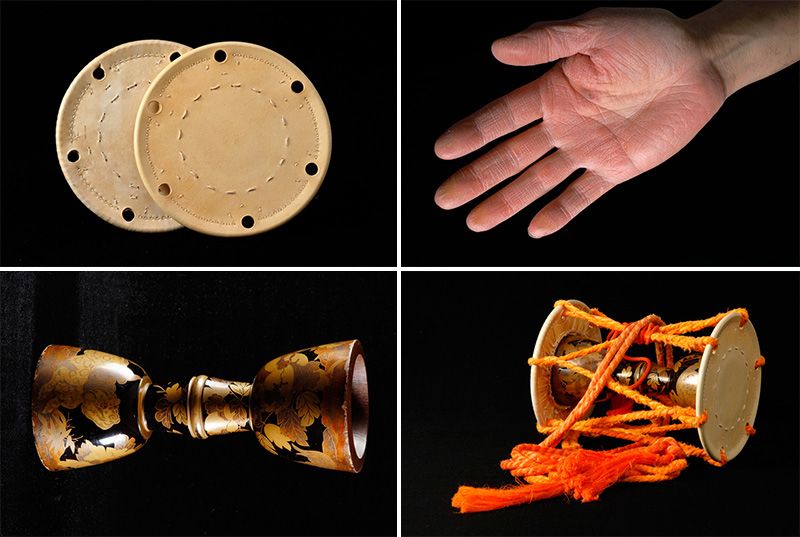 The leather head of the ōtsuzumi, made of horsehide, upper left. Ōkura’s right hand after years of striking the ōtsuzumi, upper right. The carved wooden body of a 650-year-old ōtsuzumi, passed down in the Ōkura school, lower left. The shirabeo laces that hold the drumheads to the body are woven from dyed hemp, lower right. The otsuzumi’s elegant and mystical sound is created by these plain, simple implements.

Yet as Ōkura time and again experienced moments transcending “the body’s cardiopulmonary limits,” he began to notice something extraordinary: His physical sensations were being mysteriously transformed. One day, he found himself completely free of all the physical pain that had accompanied playing the ōtsuzumi and, in short, “became one with the drum.” That earlier sensation of becoming one with nature when he was working on the farm helped him to “completely abandon the ego.” He had become preternaturally attuned to the transcendental state of ecstatic self-oblivion

. At the end of what appeared to be a long detour, he had at last obtained his own, unique sound. 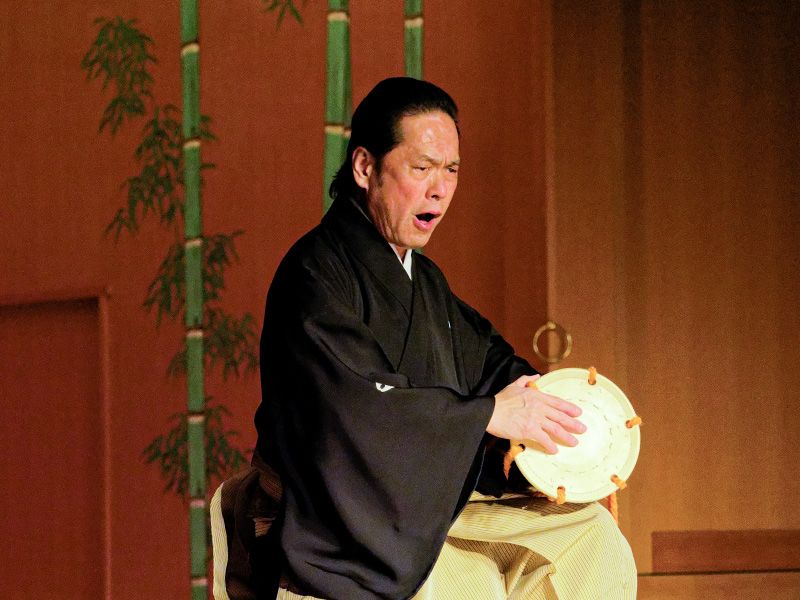 The kakegoe shouts of an ōtsuzumi drummer are just as important as the beats of the drum in providing a vital rhythmic underpinning for the nō ensemble.

In stone caves of China’s Xinjiang Uygur Autonomous Region are ancient wall paintings showing people dancing and playing tsuzumi-like drums. Moved by this karmic bond, Ōkura last year performed with the master Chinese pipa player Zhang Hongyan in a collaborative event titled Aurora of the Western Lands, staged in both Beijing and Tokyo to commemorate 45 years of Japanese-Chinese peace and amity. Inspired by his encounter with those ancient wall paintings, this remarkable production was Ōkura’s own experiment in creating a new history of the performing arts, one transcending time and space to bring back to life the lost arts of the past. The ōtsuzumi and pipa performance, which recreated the ecstatic music and dance of ancient celebrants, was widely praised in both China and Japan. 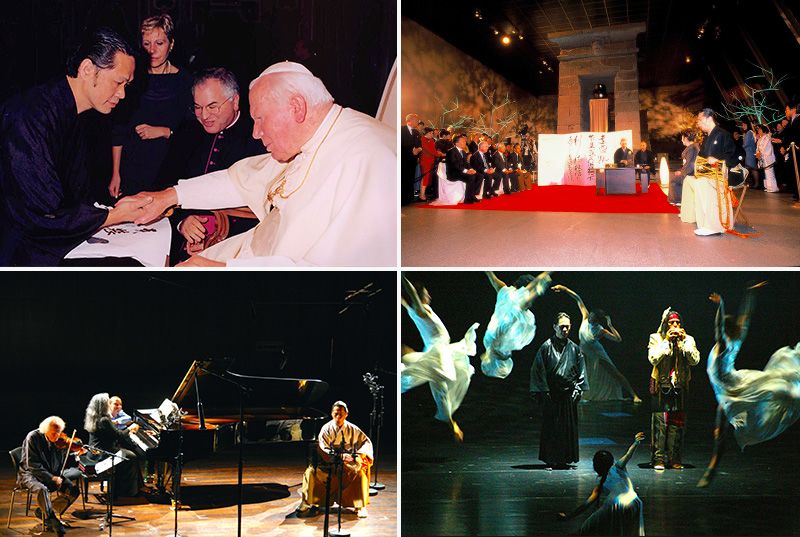 An audience with Pope John Paul II, upper left; performing at the opening event of the Oribe 2003 in NY exhibition at the New York Metropolitan Museum of Art, upper right; performing with Martha Argerich and company at the Project Martha Argerich music festival in Lugano, Switzerland, lower left (courtesy of Ōkura Shōnosuke). Performing in Jofū: Inside of Wind at the New National Theatre, Tokyo, lower right (© Tsukimori Sana).

“I’m constantly looking for opportunities to develop my creativity,” says Ōkura. “I believe that there’s a power beyond human control that—when the time is ripe will bring to us precisely what we need at the exact moment that we need it. There are moments in life when we suddenly have an encounter that seems have been brought to us by destiny.”

It is in pursuit of these precious moments that Ōkura has taken part in numerous cross-cultural collaborations. His performances with legendary South Korean artist Kim Dae-hwan and Native American flute maker and performer Robert Mirabal who incarnate the dynamic, mysterious energy of the natural world have been profoundly moving experiences that have left audiences spellbound.

Since establishing his own distinctive style as an ōtsuzumi soloist, Ōkura has found himself in increasing demand for solo performances and cross-genre concerts in internationally renowned arenas around the world. His encounters with the worlds of classical music, jazz, and modern ballet have pushed him into heretofore unchartered realms—not only as a performer but also as an executive producer of unique creative events.

Before his death, Kim Dae-hwan declared, “Ōkura is my artistic successor, and he will carve out new possibilities for the performing arts.” Even today, Ōkura is invited every year to participate in the memorial concert held every year in South Korea on the great artist’s birthday. He has also developed a deep friendship with Ivry Gitlis, master classical violinist, who has said of Ōkura that “he is a like a beloved son to me.” Such ties transcending borders and genres demonstrate Ōkura’s genius as a creator and expressive artist.

Beating with the Pulse of Life

The sound of Ōkura’s ōtsuzumi possesses an unyielding strength that permeates our being and stirs our souls. It also resonates with a kind of purity that awakens in us an awareness that our material civilization has gone too far.

Ōkura recalls one night when he called together friends for an ōtsuzumi performance by the sea under a full moon. The evening was infused with a mystical force long lost from our busy, modern lives. The moon and the wind, the sound of the waves, and the sound of the drum merged into one, enabling all those present—performers and the audience alike—to share an unforgettable experience that has engendered new connections and new possibilities.

Ōkura has been guided on his path by his belief that “the performing arts, throughout time, have had the power to uplift the human heart.” In the nō theater, he says, celebrations of the spirit are not expressed directly but through abstraction and symbols. It is an ongoing process of harmonizing the “pulse of life” with the “heartbeat of the universe.” Ōkura’s role on stage is thus to continuously express that harmony with his ōtsuzumi. 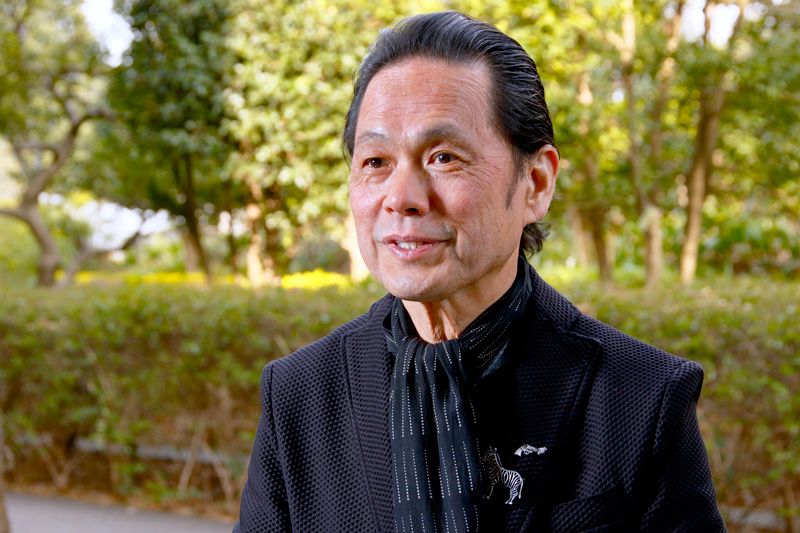 “There is still so much I want to do and accomplish,” says Ōkura.

Ōkura is a remarkable artist who continues to travel the world, his ōtsuzumi in hand, in pursuit of transformative encounters. There is no doubt that the message he selflessly communicates with his drum will continue to move people around the world.

Born into a world of traditional culture with over six centuries of history, Ōkura, through intense personal discipline, has accomplished much over the past 50-plus years, by both upholding and innovating with tradition. I put one last question to him: “What does all that you’ve learned over these many years mean to you?”

“Honestly speaking,” Ōkura replies, “I feel that I’ve only just begun my journey and haven’t mastered anything at all. There’s still so much to learn.”

Such humility may be the biggest proof that Ōkura, though his ceaseless search for the ultimate, has truly mastered a traditional art.

(Originally published in Japanese on June 22, 2017. All photos © Yamada Shinji except where otherwise noted. Taken with the cooperation of Cerulean Tower Noh Theatre and Roppongi Nature Body House.)

Ōkura has launched a series of workshops where participants can play the ōtsuzumi under his direct instruction. Foreign residents of Japan and visitors from abroad seeking to learn more about the ōtsuzumi are welcome to participate. For details, send an email to: office@tsuzumido.jp