Culture Jul 20, 2017
Yamamoto Maki’s visit to the West Bank four years ago inspired her to launch a social-enterprise-style business producing obi sashes decorated with traditional Palestinian embroidery for upscale clients in Japan. Now she wants to broaden her efforts to empower more women in the conflict-torn region she has come to love. 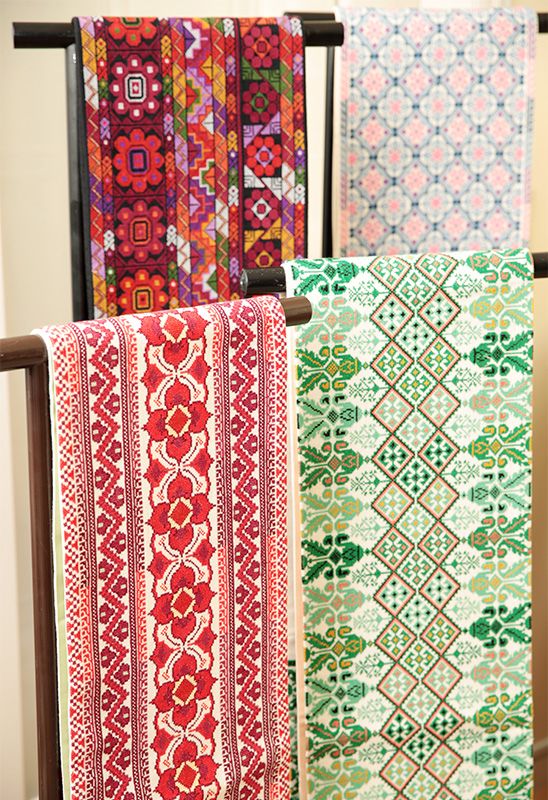 On May 11 this year, a private showing of a small group of objects rich in artistic and symbolic value was held at the Palestinian Ambassador's residence in Tokyo. On display were the world’s first Japanese obi (kimono sashes) decorated with traditional Palestinian embroidery.

It was a fairly intimate gathering of around 20, including the wives of foreign diplomats and a handful of Japanese guests with a personal interest in the program. Exclamations of delight and admiration issued from the assembled guests as two elegantly clad women emerged, faultlessly attired in Japanese kimono tied with richly patterned obi. The “models” were Maali Siam, wife of the Palestinian ambassador, and Yamamoto Maki, president of her own company (International Cultural Exchange Japan) and originator of the Palestinian obi project.

Targeting the High End of the Market

The use of traditional Palestinian decorative techniques and motifs in an obi design is novel, but the overall effect is anything but incongruous. A German guest attending the event commented on how well the obi harmonized with the kimono, thanks to the use of muted pastels in the embroidery designs. “These are high-quality, one-of-a-kind works of art, and I can see why people would spend a lot for them,” she said.

Palestinian embroidery is a labor-intensive craft. Each obi, hand-embroidered to order by native artisans back in their homeland, takes five to six months to complete. So far, only seven of these luxury items have seen the light of day. Prices vary according to design and color but start at around ¥200,000. Recently Yamamoto received an order from the elegant proprietor of a distinguished old Japanese restaurant in Kyoto. 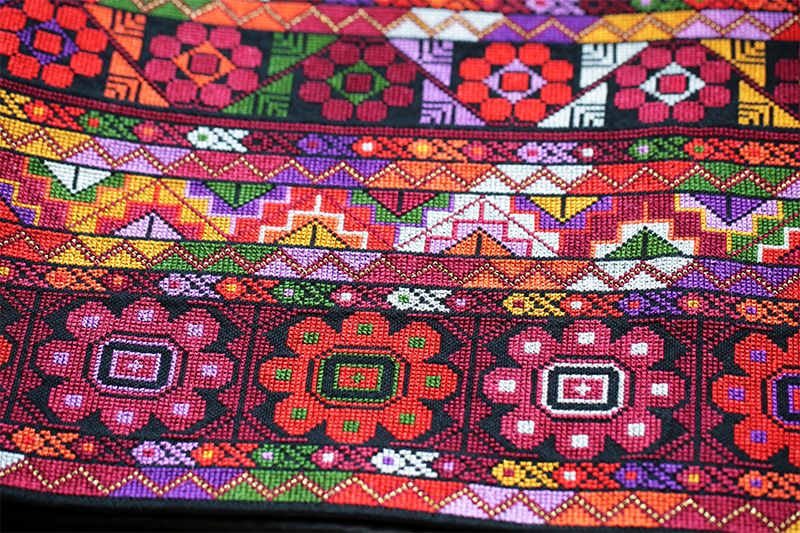 A hand-worked Palestinian-embroidered obi overseen by Yamamoto Maki, which uses traditional motifs in colors adapted to the subdued pastels favored for most women’s kimono. A highly skilled artisan, working near the city of Ramallah in the West Bank, used a fine cross-stitch to painstakingly cover the surface with an intricate pattern.

Yamamoto first came under the spell of Palestinian embroidery four years ago.

She had made the acquaintance of Maali Siam in Tokyo, and as their friendship grew, she began to take an interest in Maali’s homeland. In 2013, at her friend’s suggestion, she took part in a tour organized by the Palestinian National Authority. She toured the West Bank, including Jerusalem and Bethlehem. In the process, she had the opportunity to get to know the region’s peaceful side—from its natural splendor to its bustling cities—and savor the graceful pleasures of everyday life, including lavish meals featuring the culinary delights of the season. Yamamoto was deeply impressed by the way the Palestinians preserved their rich culture and way of life despite the corrosive effects of regional strife.

A devotee of traditional Japanese arts and crafts, Yamamoto was particularly enchanted by the beauty of Palestinian embroidery. “The main motifs are derived from local plants and animals familiar to the region’s farmers and herders, and each pattern tells a story,” she explains. “But more than anything, they’re a feast for the eyes, and they have a textural richness and warmth unique to embroidery. It was love at first sight.”

Yamamoto also witnessed the conflict that has torn the region for so long while visiting the village of Bil’in at the western edge of the occupied territory. The village, which is adjacent to an Israeli Jewish settlement, is the site of weekly protests against the Israeli occupation.

“Suddenly I heard a whistling sound, and a tear-gas shell came flying from an Israeli tank. I couldn’t help inhaling the gas. A confrontation was unfolding right in front of my eyes, and it was frightening. A local journalist was reporting on the scene with tears streaming from bloodshot eyes.

“And yet, once you get away from the demonstrations, people are just tranquilly pursuing their lives. I saw Palestinians working hard to preserve their rich culture and lifestyle under military occupation, and I thought, ‘I want to do something with these people.’”

The following year, Yamamoto quit the cosmetics company where she had worked for a decade and started up her own business (ICEJ) devoted to cultural exchange, including the design, production, and sale of Palestinian embroidery. “Things are very tough for the Palestinians," she says. “Of course, assistance from governments and NGOs is vital, but I wanted to try to help in my own way, as a member of the private sector, by launching a business venture in partnership with the residents.” 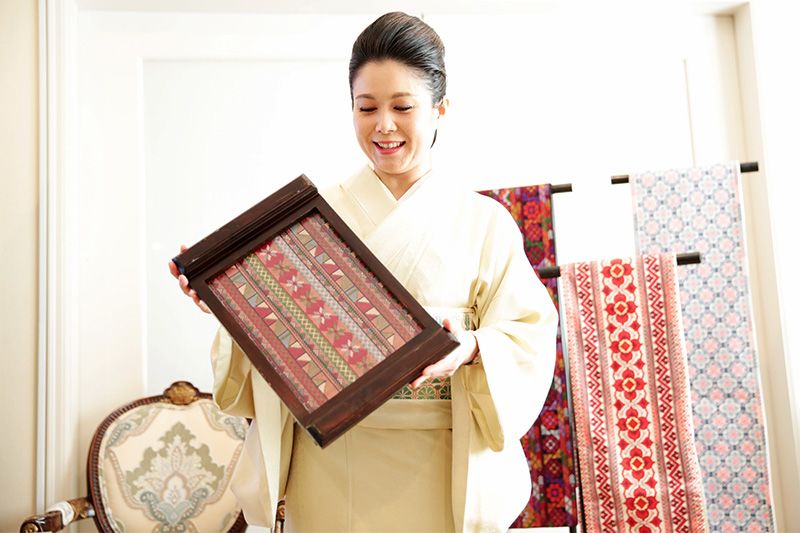 For a local business partner, Yamamoto chose the organization Inash al Usra, a long-established nonprofit devoted to empowering Palestinian women through education and vocational training. Its hand-embroidery program, which helps rural women in the area achieve economic independence, has been producing top-quality work for more than 50 years. 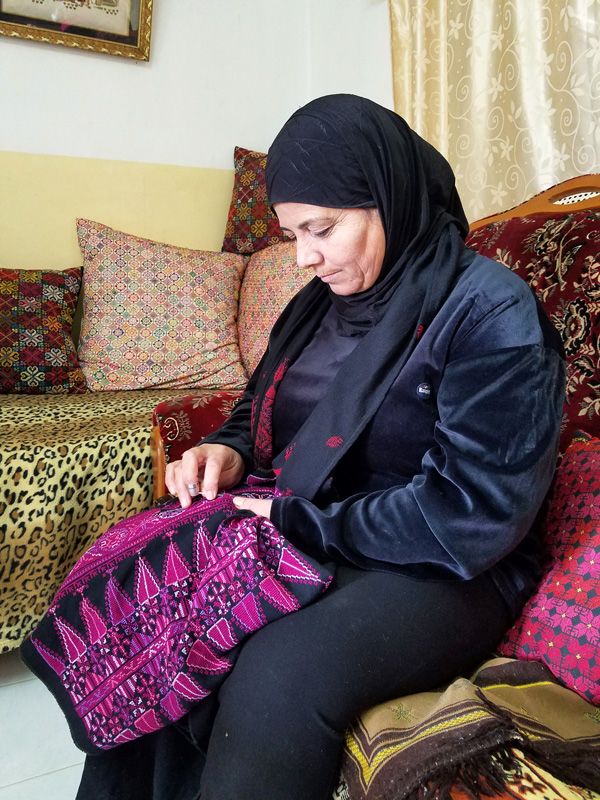 One of the women artisans who ply their craft with the support and guidance of the nonprofit Inash al Usra. She lives near Ramallah in the West Bank.

As a practitioner of Japanese classical dance and the tea ceremony, Yamamoto often wears traditional Japanese attire, so it did not take her long to hit on the idea of using Palestinian embroidery to decorate obi. She likes to wear a kimono when she calls on the artisans in their village near Ramallah, which she has visited more than 10 times in the past four years. “Once I demonstrated how the kimono was worn and the obi was tied, they thought it was a great idea. I hope that it gives them even more pride in their craft and their culture, knowing that people as far away as Japan value their work this much.”

That said, Yamamoto and the staff of Inash al Usra do not always see eye to eye on the fine points of design and execution. “The obi don’t always come out according to specifications,” says Yamamoto. “At first I threw up my hands and bought the finished work anyway. But then I realized that that wasn’t going to serve any of us well in the long run. So, I decided to be cruel to be kind and reject any product that didn’t match the order specifications.” Yamamoto knows she cannot compromise if she hopes to satisfy her discriminating and high-paying Japanese customers.

The finished obi are a collaborative effort by Palestinian and Japanese artisans. After the embroidery is complete, a trained kimono dressmaker hand-sews the embroidered cotton fabric onto a lining of silk brocade to create fukuro (pouch-style) obi. In hand-wrought decorative objects of the highest quality, care and skill are manifest even in those portions of the object normally hidden from view. 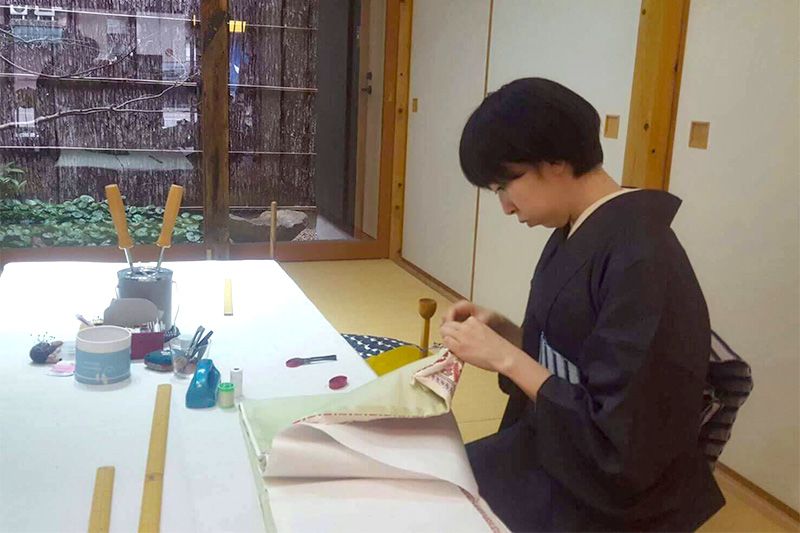 Ueki Yoshimi, a certified first-class kimono dressmaker, sews two lengths of fabric into a fukuro (pouch-style) obi. Ueki was astonished at the quality of the embroidery produced in a region she had pictured as one large war zone. “I’ve heard so much about the Palestinian territories from Ms. Yamamoto that now I want to go see them for myself.” (Photo courtesy of Matsukawa Co.) 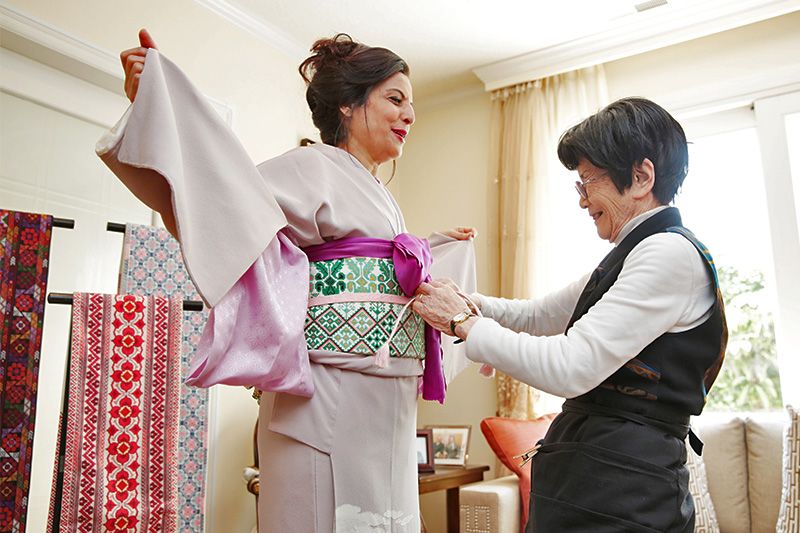 Takaoka Toyoko (right), a professional dresser, puts the finishing touches on Maali Siam’s kimono and obi. “A kimono expresses a woman’s femininity even though it covers her whole body,” says Takaoka. “It allows one to imagine the beauty within.” 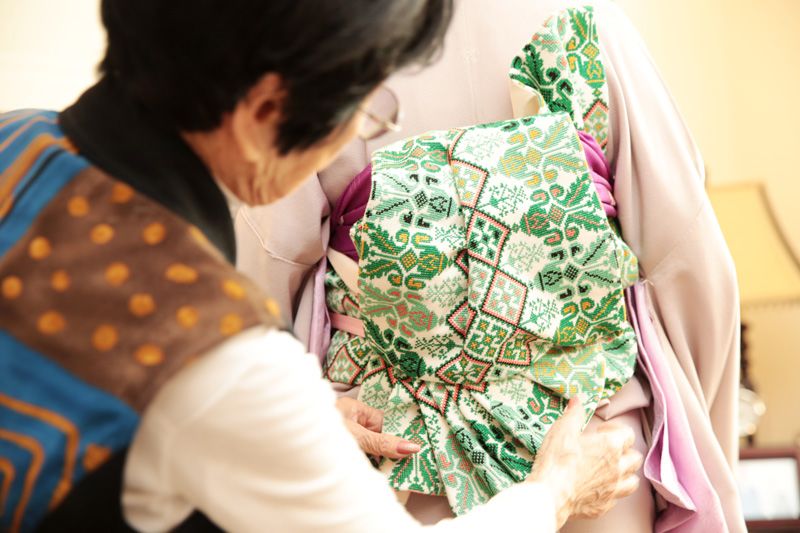 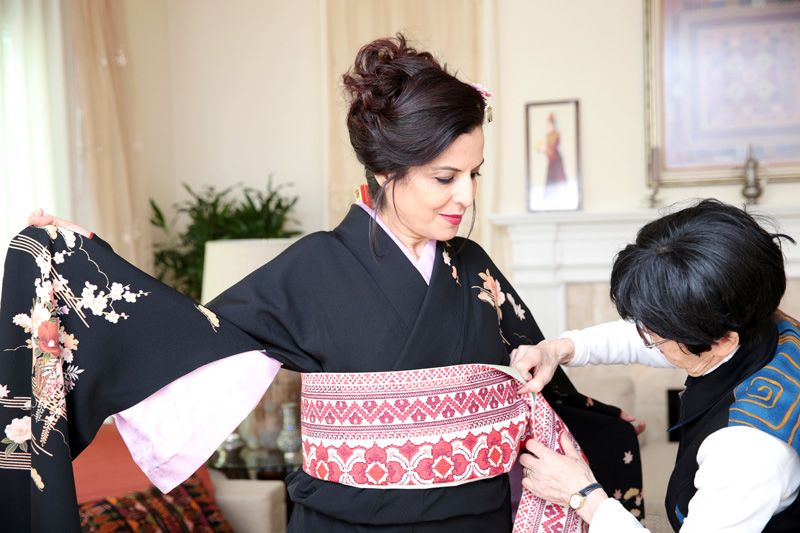 Yamamoto is thinking of launching her own embroidery training program in the Palestinian territories. Despite the efforts of Inash al Usra, the region’s top artisans are aging, and they lack able successors. Yamamoto’s plan is to give younger embroiderers an opportunity to hone their skills by working on a slightly lower grade of obi. In this way she hopes to contribute to the preservation of the region’s cultural heritage, as well as the economic empowerment of Palestinian women.

As Yamamoto sees it, active efforts are needed to preserve traditional culture in the face of rapidly changing lifestyles. This applies not only to the Palestinian tradition of embroidery but also to the endangered kimono culture of Japan. “By fusing two cultures, you can add new value,” she says. “I’m eager to produce more works of art, and if these beautiful obi can stimulate greater interest in the Palestinians among the Japanese people, so much the better.”

The Palestinian-embroidered obi seems like the perfect embodiment of Yamamoto’s mission: linking two cultures and empowering women through objects of beauty. The gaze of the Ramallah embroiderers is fixed on a point far beyond their own busy fingers.

(Originally published in Japanese on June 23, 2017. Text by Watanabe Maho of Nippon.com. Photographs by Suzuki Aiko.)