Culture Dec 11, 2017
German architectural designer Karl Bengs has emerged as a leading voice in the effort to save Japan’s traditional homes and depopulated mountain villages from extinction. Nippon.com recently visited him at his home in the rural Taketokoro district of Niigata Prefecture. 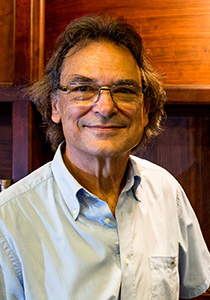 Architectural designer. Born in Berlin, Germany, in 1942. First traveled to Japan in 1966 to study karate and became fond of the country’s traditional, wooden houses. Began importing Japanese homes and parts into Germany to “revive” them there. In 1993, visited the depopulated village of Taketokoro in Niigata Prefecture and purchased a thatched, Edo-period kominka, where he now lives. Has renovated 50 such traditional homes around the country, including a former inn that now serves as his office. Actively communicates the appeal of old, Japanese-style homes and the satoyama lifestyle, for which he and his wife in 2017 were awarded the Grand Prize of the Prime Minister’s Awards for Hometown Development. http://www.k-bengs.com/en/

“Diamonds in the Rough”

The office of German architectural designer Karl Bengs is a 10-minute walk along a quiet shopping street from Matsudai Station—a small, unstaffed stop on a local train line some 40 minutes away from Echigo-Yuzawa on the Jōetsu Shinkansen. It is located on the second floor of a renovated, traditional inn, whose first floor now houses a stylish café and space for various events. 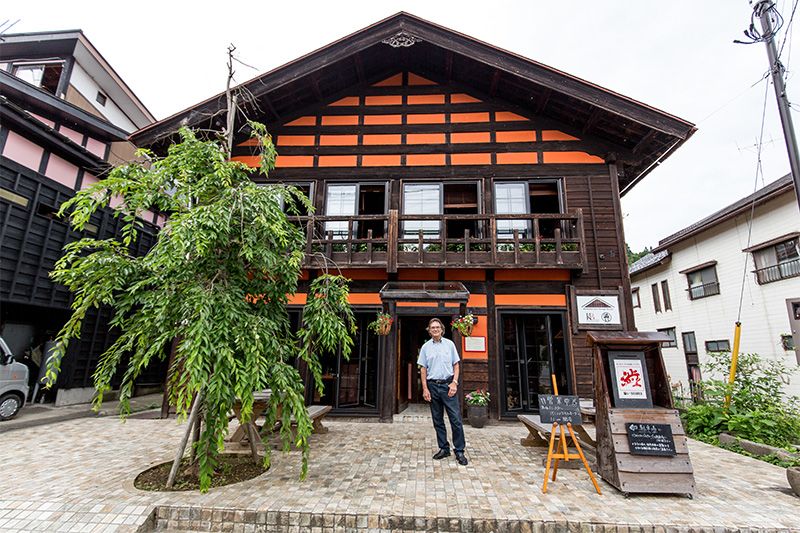 Bengs in front of his office, located on the second floor of a restored traditional inn.

Bengs’s home is a further 20-minute drive along mountainous roads. “This is the entrance to Taketokoro,” he says, pointing to a roadside map of the district that he himself drew. It is a tiny community that one might normally whisk by without a thought, but if you took the time to look, you would find the landscape dotted with quaint, colorful homes that Bengs has restored. Nestled deep among wooded hills is an elegant, thatched-roof building where he makes his home. 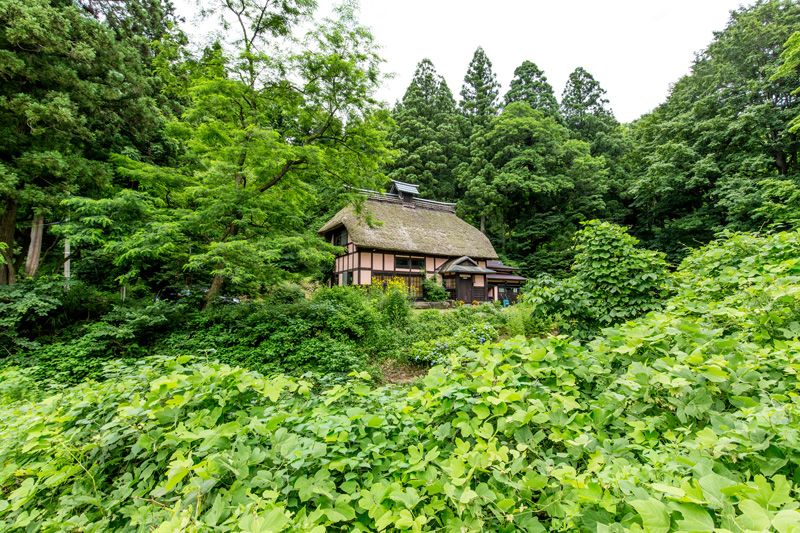 The idyllic Bengs homestead in the Taketokoro district of Niigata.

“Kominka are diamonds in the rough,” Bengs asserts. “They’ll shine beautifully if you just polish them.” Indeed, his house exudes a radiance that would have been unimaginable 24 years ago, when it had become dilapidated and was on the verge of being torn down. Its walls today are painted light rose, and windows are fitted with German-made double-pane, insulating glass. A heavy front door opens to a spacious living area revealing solid wood pillars and roof beams.

The framework—sturdily built to withstand the heavy snows of Niigata—was at first disassembled and then put back together in the original manner; the skeletal woodwork is openly revealed as a decorative element, rather than being tucked away behind walls and ceilings. The décor seamlessly incorporates both traditional Japanese furnishings and Western imports. 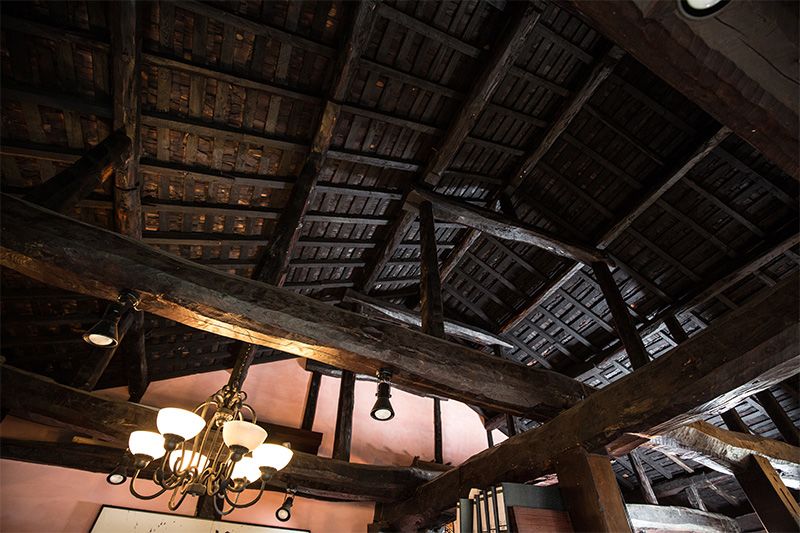 The pillars and beams were retained, while insulating materials were added to the walls, which were repainted light rose.

“In the past, homes in Japan were built to last many generations,” Bengs says. “I think the skills of master carpenters here are the best in the world. It would be such a waste to tear these houses down and just scrap them. The problem is that most people today would find it too inconvenient to live in a kominka, even if it was fully restored. A house built only with modern materials, on the other hand, would probably not be very healthy. What we need is an optimum balance of nature and technology—a mix of the best of Japan and the West.”

Kitchen counters, for instance, were imported from Germany, and the sink is slightly higher than is typical in Japan. His wife Cristina, a former flight attendant, finds this fusion of cultural currents quite appealing, adding, “I never knew how relaxing it can be to sleep underneath a thatched roof!” 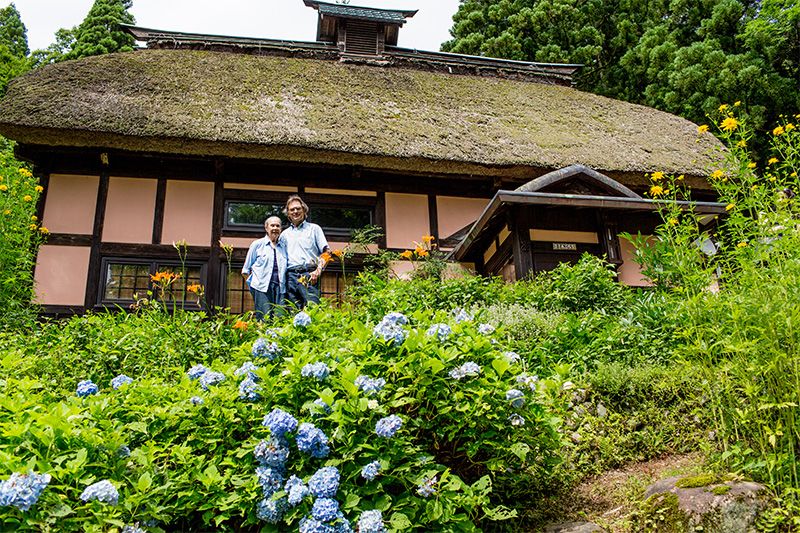 Cristina—who enjoys gardening—and Karl Bengs in front of their home.

To date, Bengs has revived eight old houses in the Taketokoro district, many of which he undertook even before owners had been found for them. “I was convinced that there’d be people who would fall in love with the village, just as I had.” His hunch proved correct, and the renovated buildings were quickly bought up, including by people who moved here from large cities. Today, hordes of visitors hoping to get a glimpse of the renovated kominka descend on Taketokoro regularly.

“Before Bengs-san came, nobody saw any value in these old houses,” notes Igarashi Tomio, who was born and raised in the village. He served as community leader until last year and now spends his weekends helping out at Yellow House, the second kominka that Bengs restored after his own home and that is now operated as a weekend café. Igarashi provides an introduction to the “Bengs philosophy” to visitors curious about kominka renovation.

“Bengs-san treats old things with special care,” Igarashi explains. “Instead of filling an eight-meter well when Yellow House was renovated, he lowered himself down and cleaned out the bottom. He placed a glass lid on top and shone colored lights, so visitors can now always see beautiful blue water flowing under the floor here.”

Igarashi feels that local residents need to do more for Taketokoro’s revitalization, and he has devoted his energies to realizing Bengs’s longstanding “dream plan” for community development. He obtained a grant from the Housing and Community Foundation to restore a run-down cowshed; the walls were painted subdued orange, and pilasters were added in keeping with the “Bengs style.” Every winter, he helps place sheets on the thatched roof of the Bengs home to protect it from heavy snowfall, and he is busily engaged in various community activities—planning traditional festivals and village excursions and inviting interns.

Thanks to such efforts, the local population has nearly doubled—from 19 people in 9 households at one time to 34 people in 11 households. Interestingly, more than half the residents today come from outside the village. In April 2016—when there were five children under the age of eight—a new building for house-sharers was completed. The house is now full, being shared by six young people who help with farm work and community-building activities.

These initiatives in Taketokoro have even gained national government recognition. In 2017, Bengs and his wife received the Grand Prize in the Prime Minister’s Awards for Hometown Development for helping preserve Japan’s traditional architectural culture and reviving a depopulated rural community.

Western touches, like imported double-pane glass and a dining table (left), blend harmoniously with Japanese elements, such as a tokonoma alcove (center) and a window railing found in an antique shop that serves as a stairway banister (right).

Karate as a Pathway to Japan

One of Bengs’s most prized possessions is a copy of Bruno Taut’s Houses and People of Japan that he displays inside a glass case in the first-floor café at his office. The book by the German architect who appreciated and wrote extensively about the beauty of Japanese architecture had belonged to his father, a restorer of fresco paintings who died in World War II a month before Bengs was born. Bengs grew up in East Berlin among the items his father left—books about Japan, a katana sword, ukiyo-e paintings, and netsuke miniature carvings—and developed a strong desire to visit the country. 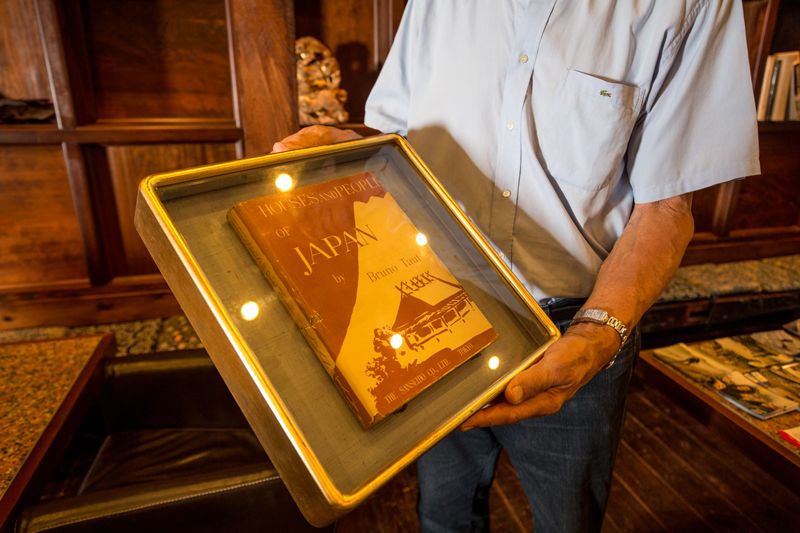 A copy of Bruno Taut’s Houses and People of Japan owned by his father is a personal treasure that is preserved in a glass case and put on display in the first-floor café.

Bengs first visited Japan in 1966. He was working at an interior design office in Paris when he ran into a former Nihon University student who had studied karate there and decided to enroll in the university to learn the martial art. He became enamored with traditional Japanese houses and, dividing his time between Japan and Germany, began importing old Japanese homes to Dusseldorf. He also worked as an architectural adviser in the Tokyo design office of Antonin Raymond—whom Bengs respects highly—helping to build a traditional, thatched-roof teahouse on the grounds of a golf course in the Kantō area.

His initial encounter with Taketokoro was in the fall of 1993, during a trip to fill an order for a German client seeking to import a kominka. He accompanied a Tokyo carpenter who had come to purchase rice in a neighboring village and fell in love with Taketokoro at first sight. He immediately purchased an abandoned home, without even consulting his wife, and began working to renovate the building.

He has since moved into the community. After word about his masterful restoration work spread, he was “honored” with a request to revive an old house in Niigata Prefecture that, by coincidence, was adjacent to the Shibata Catholic Church that was designed by Antonin Raymond. Requests subsequently began pouring in from across the country, including Tokyo, Nagano, Saitama, Tochigi, and Yamanashi, and he has helped to restore 50 kominka to date.

“Higashiyama Kaii once said that a town without old buildings is the same as a person without memories,” Bengs explains. This statement by the Nihonga artist, whom Bengs met in Germany, has become his cherished personal motto. While born in Germany, Bengs has developed an appreciation for the beauty of traditional architectural styles that runs deeper than most native residents of Japan. “By preserving the best of traditional wooden design and incorporating modern architectural approaches,” Bengs, working from Taketokoro, says, “I hope to leave behind many more buildings that will be utilized and embraced by generations to come.” 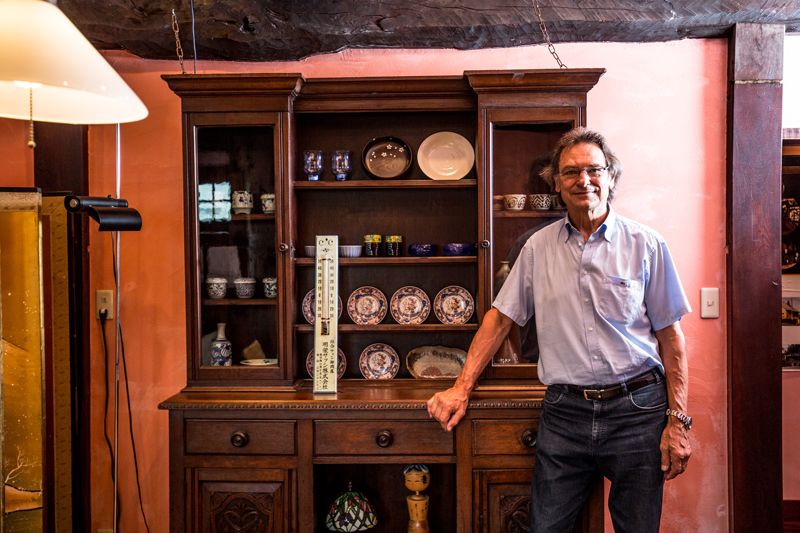 (Originally written in Japanese by Kawakatsu Miki and published on November 10, 2017. Photos by Hatori Hiroshi. Banner photo: Karl Bengs stands under a kamidana Shinto altar near the entrance to his office.)