The Fair Face of Japanese Beauty

Culture Oct 31, 2013
The old Japanese saying, “a fair complexion hides seven flaws,” attests to the high regard the Japanese have for a light skin tone. Even today, amid the ebb and tide of makeup trends both domestic and foreign, women continue to pursue a pale ideal of beauty. This article looks at the origins and evolution of conceptions of skin beauty in Japan.

The desire to be beautiful is as old as history. In Japan, beauty has long been associated with a light skin tone. During the Nara Period (710–94), women painted their face with a white powder called oshiroi, and in the Heian Period (794–1185), a white facial color continued to stand as a symbol of beauty. References to the beauty of light skin tone are found in the Diary of Lady Murasaki and Tale of Genji. More than a thousand years ago, cosmetics for whitening the skin had already become a status symbol among the aristocracy.

Sōshi arai (Book-washing Ono no Komachi), from the Seven Komachi series by Utagawa Kunisada II (1857). This woodblock print depicts courtesans performing their morning ablutions. The woman on the left holds a rice bran pouch used for cleansing her face. (© Pola Research Institute of Beauty and Culture)

Even today, rice is used as an ingredient in the production of cosmetics. (© Im Co. and Kosé Provision)

During the Edo Period (1603–1868), the culture of fair skin gained ground among commoners. The look sought after at this time, however, was a natural one. Ukkiri, a term for moist, naturally colored skin, appeared in a manual on beauty titled Miyako fūzoku kewaiden (A Handbook of Cosmetics in the Capital), which was published in 1813 and remained a bible for beauty through the next century. The work introduces a range of techniques for making the skin “beautifully white,” including facial cleansing, facial packs made from a natural mineral form of lead oxide, and herbal treatments for acne.

Tomizawa’s work on modern cosmetics requires her to study the classics as well.

Tomizawa Yōko, a researcher at Pola Research Institute of Beauty and Culture, describes the roots of the affinity for natural-colored white. “The tone the Japanese seek to achieve is not milky white but translucent, like a polished stone. Since the Edo period, women have gone to great pains to achieve this.” Records show that women spent a great deal of time putting on makeup and that cosmetics were geared toward accentuating the natural beauty of the skin. Miyako fūzoku kewaiden, for example, describes how oshiroi should be repeatedly applied and removed and the cheeks rubbed with a towel in order to make the skin look like porcelain.

Wearing makeup was considered good etiquette and form. Women were expected to be made up from early morning until late at night, even while they were in the bath. Putting on makeup was a private act, one not to be seen by others. According to Tomizawa, this is probably the reason that many women today tend to shy away from putting on makeup in public, such as when riding a train. 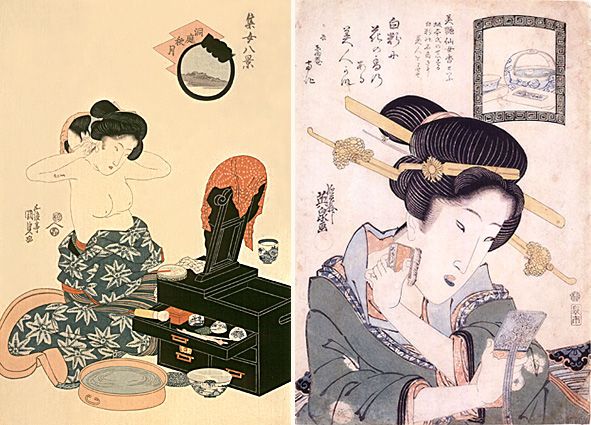 Left: Dōtei shūgetsu (Autumn Moon over Lake Dōtei) from the Shūjohakkei (Eight Views of Women) series by Utagawa Kunisada, late Edo period. A woman strips to her waist to keep the white powder she is applying to her face from staining her kimono. Traditionally, women not only put makeup on their face but on their ears, the nape of their neck, and chest. Right: Bien Senjokō, shikibu hake (Bien Senjokō with a Shikibu Brush), Keisai Eisen, ca. 1818–30. Bien Senjokō was a brand of oshiroi popular at the end of the Edo period. This print depicts a courtesan applying the whitener with a brush. (© Pola Research Institute of Beauty and Culture) 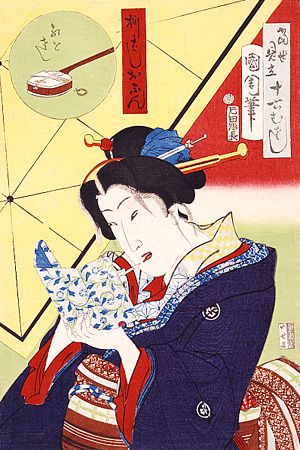 Yanagihashi Okon beni o sashi (Okon of the Yanagihashi Applies Lipstick) in the Tōsei mitate jūroku musashi (Sixteen Modern Customs in the Style of “Sixteen Musashis”) series. This 1871 woodblock print by Toyohara Kunichika depicts a geisha named Okon from the Yanagihashi area coloring her lips. The board at top was used to play a game called “sixteen Musashis”; the prints in this series involve some play on the word sashi (here the homophonous verb “to apply”). (© Pola Research Institute of Beauty and Culture)

Black was an important color in the expression of beauty and splendor. It was associated with Japanese women’s distinctive black hair and stained teeth. Women colored their teeth after marriage and shaved their eyebrows after bearing a child. Both these customs reflected the belief that modesty of expression was a virtue and part of a woman’s proper demeanor. In 1870 the practice of blackened teeth was banned among the nobility, but it continued to be followed by people in other classes until early in the Shōwa era (1926–89).

In these ways, makeup was used as an expression of modesty—of self-effacement and discretion. But a new trend was taking shape in the cities of Osaka, Kyoto, and Edo (present-day Tokyo), where women were dressing up to go out to a kabuki performance, a flower-viewing outing, or some other event. The clothes worn by kabuki actors and beautiful courtesans, the fashion trailblazers of the time, began to be copied, and flowery, eye-catching styles came into vogue. Women began to use rouge and lipstick and to accent their ears and the outer corners of their eyes with red.

Red, white, and black were the only colors used in makeup at the time; the tonal triad can be seen to this day in the makeup of kabuki actors. It was not until the latter part of the Meiji era (1868–1912), when Western cultural influences were growing stronger, that Japanese women began to use a full palette of hues.

The Revolutionary Idea of “Skin-Colored”

In the ensuing years, the biggest change to occur in the world of cosmetics in Japan was the growing pursuit of more natural skin color. When colored oshiroi made its appearance in the latter half of the Meiji era, Japanese women realized that cosmetics that complemented their own skin tone could be found. In the Shōwa era, graded colors to apply to the skin came onto the market, and women were able to choose the hue closest to their own. The foundation was still made from oshiroi. 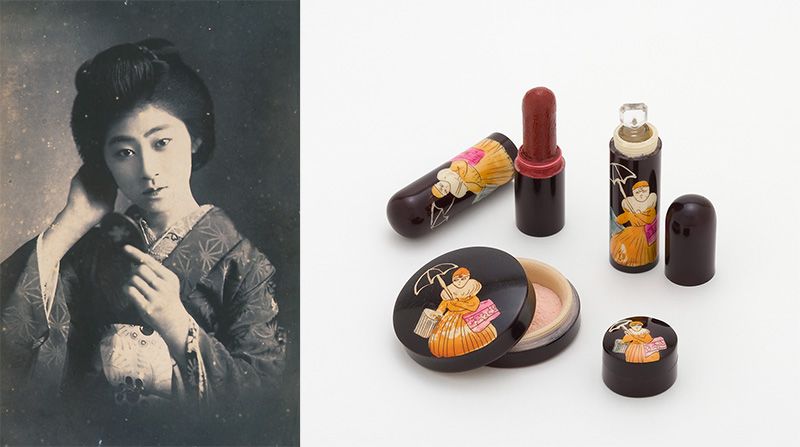 Left: A postcard from the Meiji era features a woman with beautifully made-up but natural looking eyebrows. Right: A makeup set from the 1920s with lipstick, face powder, perfume, and rouge. The containers feature images of women. (© Pola Research Institute of Beauty and Culture) 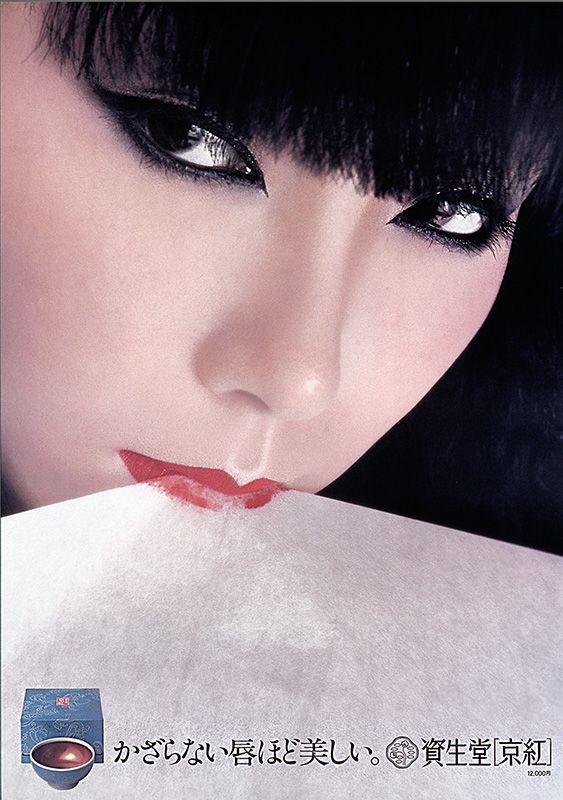 Yamaguchi Sayoko’s striking Asian features made her one of the more popular models of the 1970s and 1980s. (© Yokosuka Noriaki. Courtesy of Shiseido Co.)

From the end of World War II through the 1960s, Western styles of makeup gained popularity, and eye shadow, oil-based foundations, false eyelashes, mascara, and various other products arrived in Japan’s shops. Tomizawa notes the spread of color televisions from the 1960s onward also fueled this trend. The films shown at movie houses tended to have a pinkish overtone, which boosted the popularity of pink makeup in particular.

The 1980s saw a marked move away from emulating the West, as more and more women sought to express their own identity as Japanese in various areas of their lives. Cosmetics were no exception. With jet-black straight hair and almond-shaped eyes, Yamaguchi Sayoko, a Japanese model and actress who made it on the international scene, served as a symbol of this new way of thinking and an inspiration for young women back home. 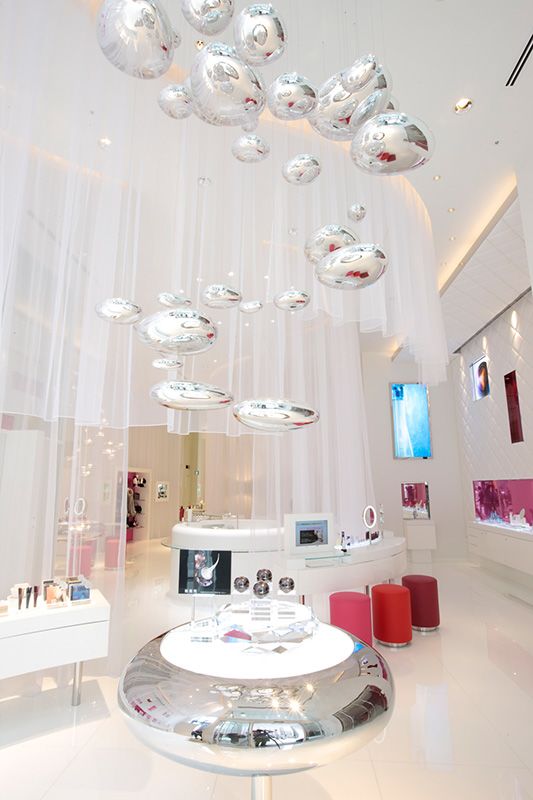 The transformation in Japanese women’s attitudes toward makeup has brought about considerable change in the products themselves. Since the 1980s, consumers have become interested in what the products are made from, how they work, and why they are effective. The change in mindset is epitomized by a well-known piece of ad copy from the late 1980s: “Cosmetics are beginning to speak the language of science.” The current anti-aging fad is similarly regarded as having solid scientific roots.

Tomizawa feels, however, that the Japanese belief that well-cared-for skin is a key to beauty—a belief that remains unchanged from the Heian period—will remain at the foundation of attitudes to beauty no matter what the contemporary trends may be.

“Young Japanese continue to be swept up by various trends, including the ganguro [“black face”] and small-face looks. Nevertheless, women still want to have skin with a smooth texture; skin like glass. The recent boom in ‘beautifully white’ is an indication that we have returned to our starting point—the Japanese adulation of light skin.”

(Originally written in Japanese by Ushijima Bifue. Banner photo: Ogushiage [The Putting-Up-Hair Ceremony] in the Chiyoda no Ōoku [Court Ladies of the Chiyoda Palace] series by Yōshū Chikanobu, 1894–96. © Pola Research Institute of Beauty and Culture.)