Discovering “Nōgaku”: The Blossoming of Tradition

Culture Feb 5, 2013
Nōgaku, consisting of nō and kyōgen dramas, is the world’s oldest surviving theatrical art, dating back some 700 years. How has this ancient art (designated an Intangible Cultural Heritage by UNESCO) managed to remain a living art into the twenty-first century? For insights on this, a leading nōgaku scholar interviews Kanze Kiyokazu, the twenty-sixth grandmaster of the Kanze School. 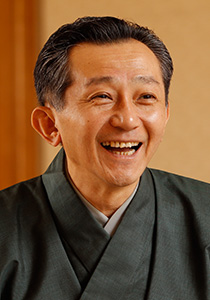 Born in 1959 as the eldest son of Kanze Sakon, the twenty-fifth grand master of the Kanze School. First performed on stage at age four and succeeded his father in 1990 as the twenty-sixth head of the school, which claims the largest number of professional nōgaku performers. Received the Minister of Education’s Art Encouragement Prize for New Artists in 1996 and was designated a Chevalier of the French Order of Arts and Letters in 1999. Has performed frequently in foreign countries, including France, the United States, India, and China. Certified as a possessor of an important intangible cultural property. Chairs the Association of Kanze and the Kanze Foundation and is an executive trustee of the Association for Japanese Noh Plays. Also serves as a Board of Councils member for the Japan Arts Council and lectures at the Faculty of Music of Tokyo University of the Arts.

Preserving and Growing a 700-Year Tradition

MATSUOKA SHINPEI  One thing that makes nōgaku unique among the world’s theatrical arts is that significant aspects that first evolved seven centuries ago —including the stage, script, and how the plays are actually performed—can still be experienced by modern audiences. For example, nō masks dating from the Muromachi period [1336–1573] are used in performances today. How has nōgaku been able to preserve its traditions so well?

KANZE KIYOKAZU  I think one important element is the universality of the themes running through many of the plays in the repertoire like a basso continuo; themes that human beings are likely to confront in any era, in any country, such as love, desire, and hatred. These are themes that people can relate to in any age. 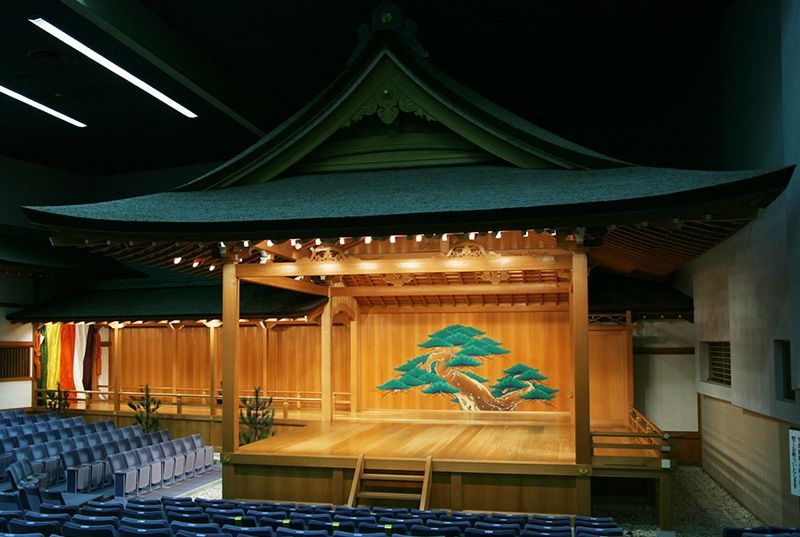 MATSUOKA  That said, it’s quite surprising that this performing art has survived for around seven centuries—thanks essentially to the dedication of private families of actors like the Kanze school, which traces its lineage directly to the founders of the performing art: Kan’ami and his son, Zeami. As the twenty-sixth head of the Kanze school, what are your feelings regarding the role of the “family”?

KANZE  I’m sure all the heads of the Kanze school over the centuries made painstaking efforts to preserve and hand down the method and spirit of the family’s art. If they had been complacent, the tradition could very easily have died out. I’m sure there were many times in our family’s long history that the pressure to honor and adhere to tradition actually became a driving force for innovation. Without such dynamism, any stage art is bound to lose its theatrical appeal. This continuous tension between the forces of continuity and change was a major factor behind the survival of nōgaku as a living art form. 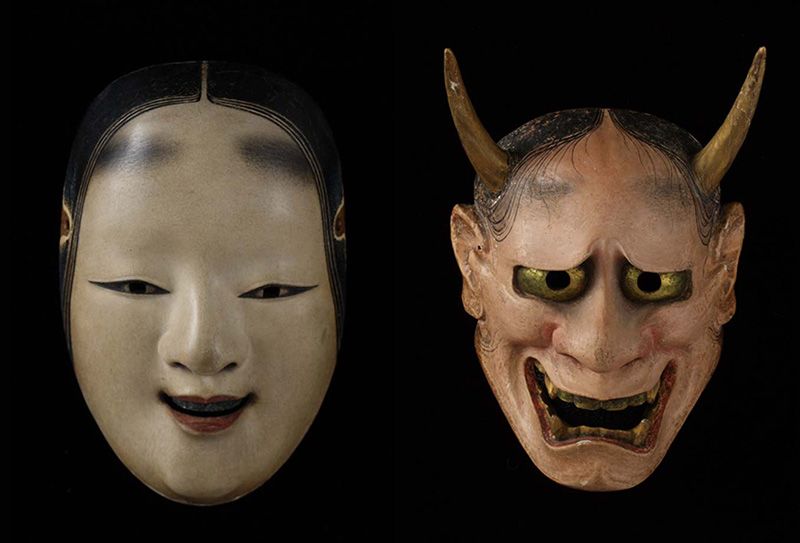 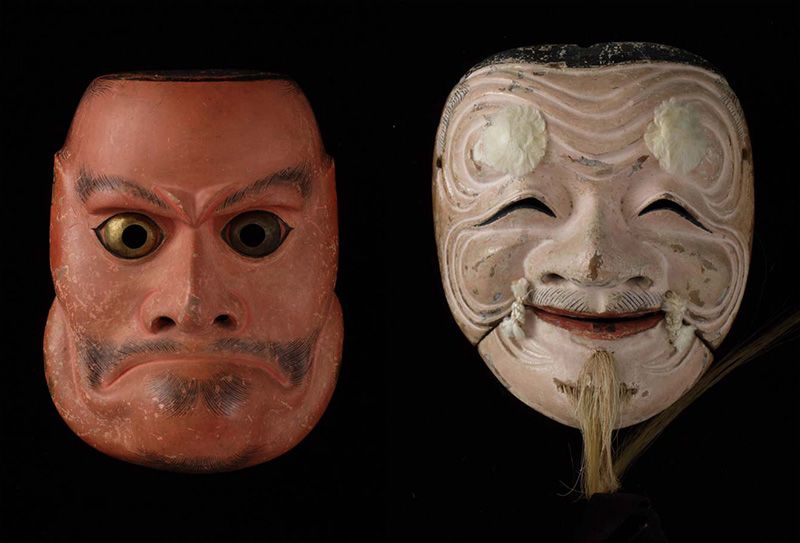 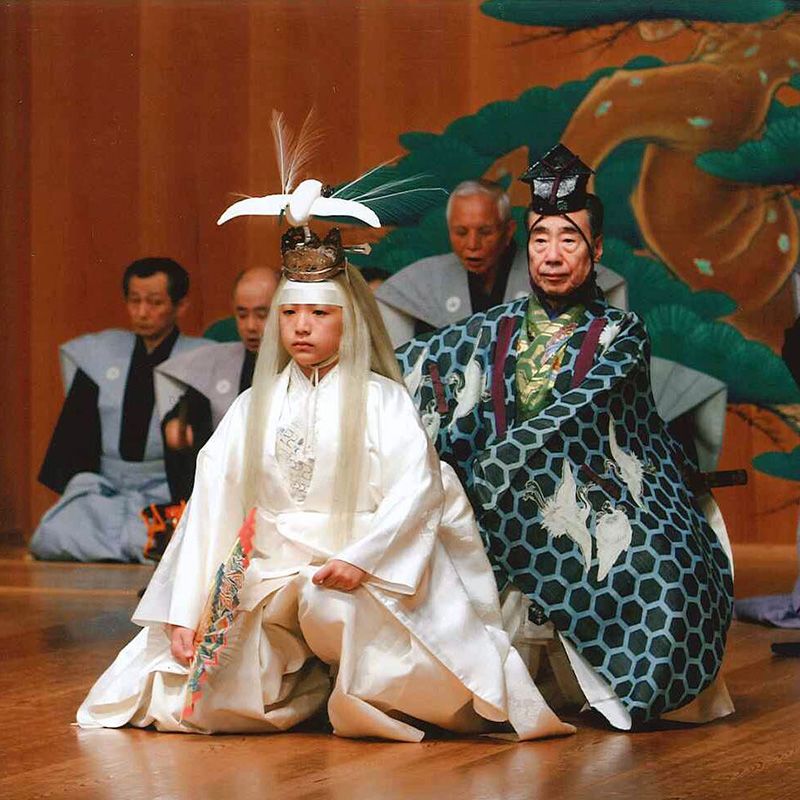 Because purity is the central theme of “Sagi,” the actor in the leading role does not wear a mask and must be either a boy or an old man.

MATSUOKA  Your son, Saburōta, is now undergoing the training that will enable him to help keep this important tradition alive. What are some of the things that you’re teaching him?

KANZE  He recently performed a play called Sagi [The White Heron]. During rehearsals, I didn’t give him any specific advice. All I did was convey to him what my father told me.

MATSUOKA  And what were the things your father taught you?

KANZE  The most important thing was, “When you’re performing this play, remember, you’re not human. You’re a heron.” This doesn’t mean moving one’s arms like a bird flapping its wings. He never talked about technique; he only showed me the basic movements and told me, “Just imitate what I’m doing.” I practiced those moves over and over, and this is exactly what Saburōta did. I had him imitate me, without offering him any technical advice.

Ultimately, of course, it’s not enough to be a carbon copy of your father or grandfather. You have to digest what you’re taught and transform it into something that is uniquely yours. Naturally, your performance style will have much in common with that of your teacher, but it should ultimately go beyond that; you have to set your own goals for artistic self-expression and keep refining your art in pursuit of those goals. 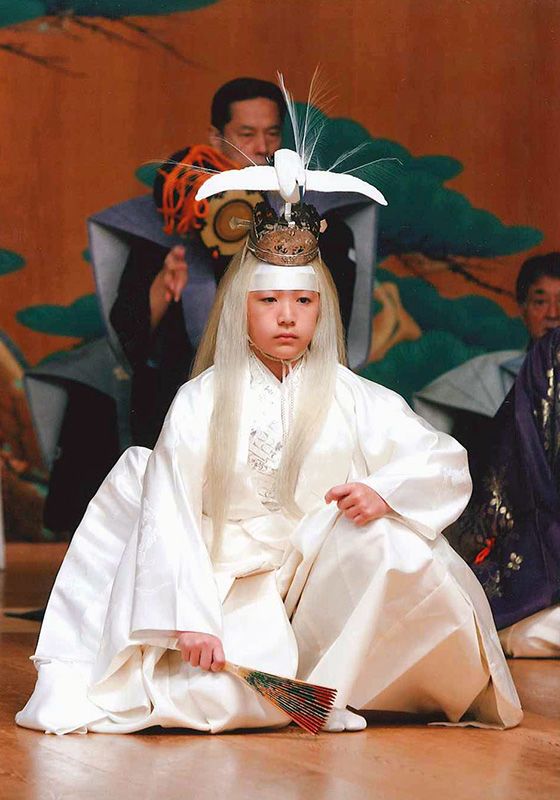 MATSUOKA Sagi is an unusual play in that it’s either performed by a boy or a man after he has turned sixty. Why is that?

KANZE I think the central theme of the play is purity of spirit, as expressed in the all-white costume worn by the actor. White is an expression of something spotless, clean, and pure. To portray such purity, the actor must be physically free of impurities; that is, either before puberty or after the body is devitalized. Of course, a sixty-year-old today is not exactly an old man! The age at which my father first performed this play was ten, I was eleven, and Saburōta was thirteen.

MATSUOKA  So it’s in that pure state that the basic forms or styles of nōgaku are passed on from generation to generation by instilling them in a youthful mind and body.

Fūshi-kaden as a Family Secret

MATSUKOKA  Can you describe the role of the “family” in nōgaku?

KANZE  Some of the nō masks and costumes in our family’s collection date back over 700 years. That means that the masks may actually have been used by Kan’ami and Zeami themselves. I sometimes use these masks onstage, and since I perspire when performing, it’s conceivable that my sweat mingles with the traces of my ancestors’ perspiration. Thinking about such things gives me a renewed sense of my family’s long history. 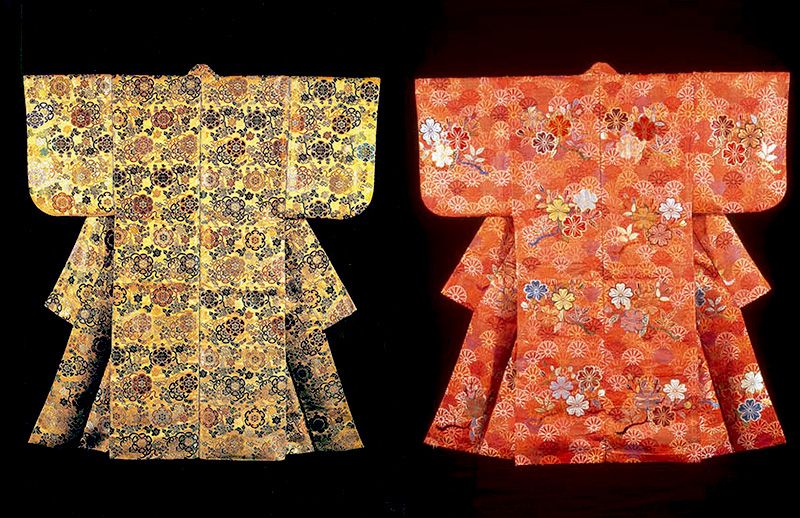 KANZE  Other items our family owns include manuscripts that Zeami wrote in his own handwriting. Looking at how the ink bleeds in certain places, I find myself wondering what thoughts must have been running through his mind as he was writing things down. Zeami, at such times, is not just an ancestral figure but a real human being that I feel very close to.

MATSUOKA  The Kanze family places great importance on Zeami’s theoretical treatise on nō, titled Fūshi-kaden [The Transmission of the Flower of Acting Style].

KANZE Yes, that could be described as part of our family tradition. It’s one of the noteworthy things about us. The manuscript demonstrates that Zeami was interested not just in performing before audiences but also in putting his thoughts and insights in writing so that it can be transmitted to future generations. If he hadn’t left these theoretical texts, I very much doubt that nōgaku could have survived for seven centuries.

MATSUOKA  Zeami didn’t write these treatises for the general public; he addressed them specifically to those who would succeed him. He hoped, it seems, that his successors would read them carefully to further hone and develop their art and that the Kanze troupe of actors would grow and prosper under its leader. I once heard from Kanze Yoshinobu, your younger brother, that he had actually never seen Zeami’s handwritten documents. I was surprised at the time, but I later learned that there is a tacit understanding that these documents are only to be seen only by the head of the school and his heir—and nobody else. 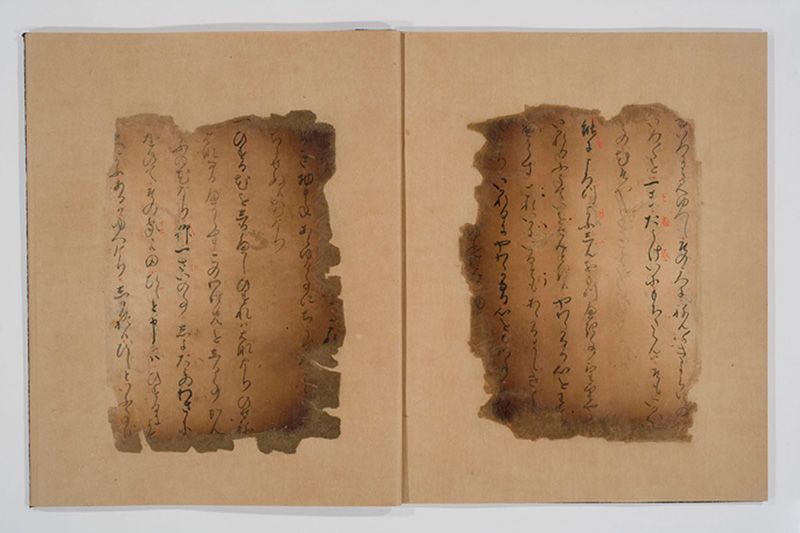 Pages from Zeami’s handwritten treatise on "nō," titled “Fūshi-kaden” (The Transmission of the Flower of Acting Style).

KANZE  I was called by my father one day, when I had already become an adult, and he told me, “If case of an emergency, make sure you grab this package and run as fast as you can.” When I asked him, “But what about my family?” he said, “They’ll be all right.” Obviously, the package was of paramount importance. When I asked him what it contained, he said, “You must already know what’s inside: these are the most important documents belonging to the Kanze family.”

MATSUOKA  Did you confirm its contents at the time?

KANZE  No, it was only later, when my father passed away and I succeeded him as the head of the school at age thirty-one, that I very cautiously opened the package. 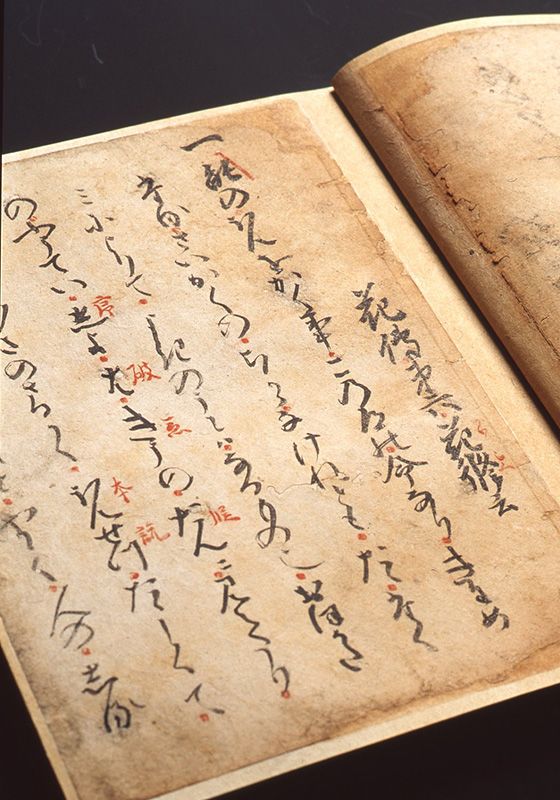 A page from “Fūshi-kaden” with annotations in red ink.

MATSUOKA  Despite the secrecy surrounding these documents, you decided to make them available on the web. What were the reasons for your decision?

KANZE  I thought they deserved to be viewed by more people. Having researchers and even members of the public see them from fresh perspectives would lead, I thought, to new discoveries. Many sections of the text contain annotations written in red ink. It’s exciting just imaging who could have added those comments and for what reasons.

MATSUOKA  One might say that opening up the world of nōgaku is a vital component of keeping the tradition alive for future generations.

KANZE  Given the centuries-old heritage of nōgaku, I think we can safely say that the legacy our ancestors have left behind is a common asset for humankind. In that sense, making these family treasures public is one of the responsibilities of a Kanze grand master in the twenty-first century. 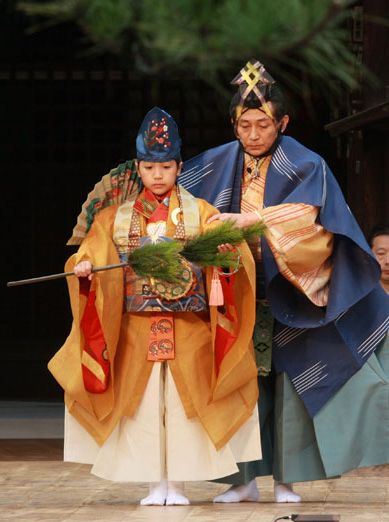 MATSUOKA  So it’s not enough simply preserving tradition. You also need to help it grow and move in new directions.

KANZE  One role of a grand master is to communicate the rich world of nōgaku to people both in and outside of Japan, and to encourage as many of them as possible to come see a performance. Ultimately, we also want more people to take up the study of nōgaku, since keeping a tradition alive requires not only an audience but also performers. I’m particularly interested in nurturing the next generation of actors, and I hope that Saburōta will continue with the activities I’ve initiated. At the moment, though, he may be more interested in playing basketball than rehearsing nōgaku! [Laughs] 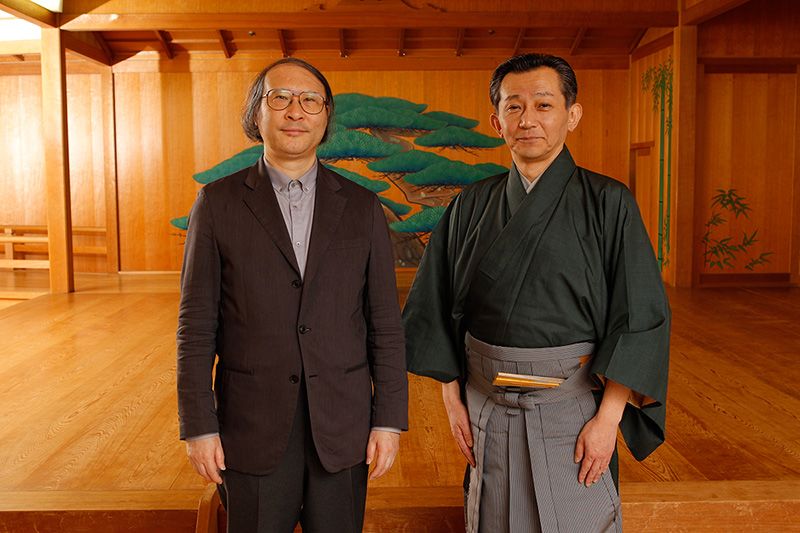 (Originally written in Japanese. Photographs and editorial assistance courtesy of the Association of Kanze. Portrait photographs by Ōkubo Keizō. Video by Ōtani Kiyohide.)