A New Era for Kabuki

The Dramatic History of Kabuki Theaters

Culture Apr 26, 2013
The new Kabukiza theater in Tokyo’s Ginza district opened its doors to the public on April 2, 2013. Over the 400-year history of kabuki, the theaters where its performances have been staged have had dramatic histories of their own. Here we look back on some of the more colorful events at those venues.

More than 400 years have passed since the emergence of kabuki theater. It was in 1603 that Izumo no Okuni, said to have been a female attendant at the Grand Shrine of Izumo (in present-day Shimane Prefecture), created this new style of dramatic art, then called the kabuki odori. Over this long history of the art, the theaters and playhouses where kabuki has been performed have experienced all sorts of ups and downs. This history was showcased in the “Kabuki: Theaters During the Edo Period” exhibition, held at the Suntory Museum of Art in Tokyo’s Roppongi district from February 6 to March 31, 2013. The exhibition highlighted the various stages that kabuki has passed through over the years, including such artifacts as stage diagrams and paintings of kabuki theaters and actors. 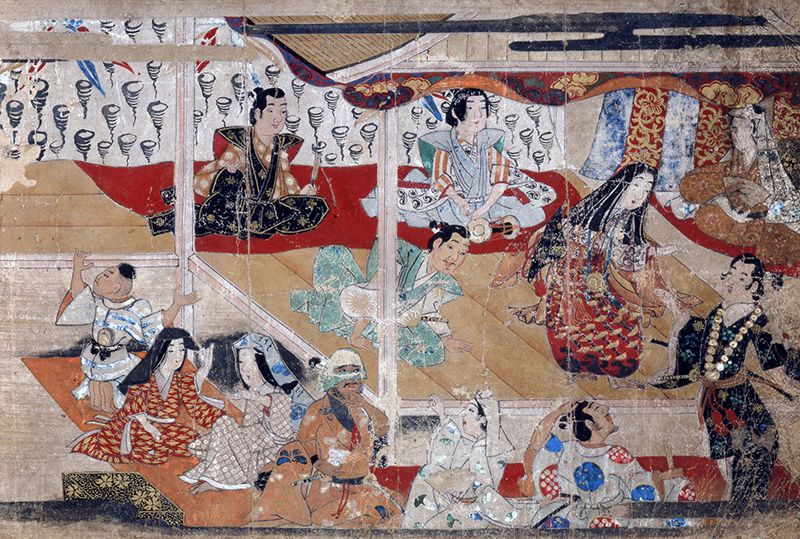 In December 2012, Nakamura Kanzaburō XVIII passed away at the age of just 57. The Nakamura family lineage stretches back to Saruwaka Kanzaburō, who founded the theater Saruwakaza in 1624. Arriving in Edo from Kyoto, he obtained permission from the local magistrate to build the first kabuki theater in an area between what is now Nihombashi and Kyōbashi in Tokyo.

The theater was not far from Edo Castle, where a drum was traditionally beaten to announce the arrival of a member of the samurai class. Similarly, a drum was attached to a high tower atop Saruwakaza to attract customers to the theatrical performances. The confusion of sounds between the two drums was the reason the theater had to eventually move to the area that is now called Ningyōchō.

At the early kabuki performances the audience was not composed of quiet spectators as it is today. The popular Uki-e woodblock prints of the day depict scenes of audience members eating, drinking, chatting and generally doing whatever they liked. Theaters were places that people visited in a sort of sightseeing mood. In many cases programs were filled with performances scheduled throughout the day, from morning to late evening.

With such a full-day lineup, it became popular for audience members to bring along a packed lunch, or bentō. Since they were eaten when the curtain (maku) was down, the meals came to be known as makunouchi. The popular bentō called sukeroku sushi also takes its name from one of the plays in the Kabuki Jūhachiban—a famous repertoire of 18 kabuki plays. 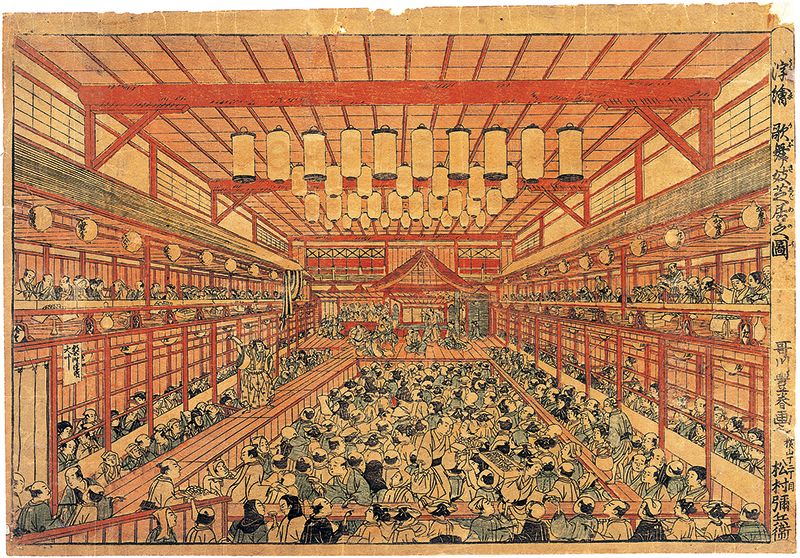 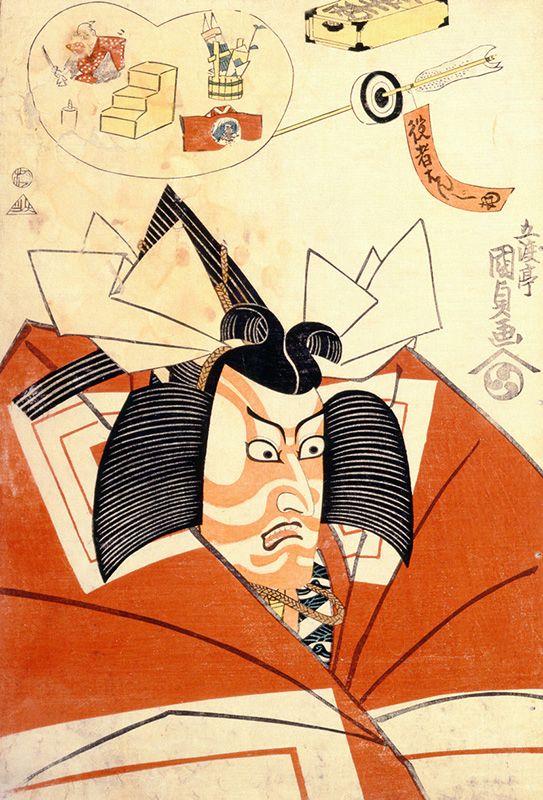 The Genroku period (1688–1704) was a heyday for kabuki, with four theaters in Edo alone. In addition to Saruwakaza, there was Ichimuraza (in Ningyōchō), Moritaza (in the same area as today’s Kabukiza), and Yamamuraza (in Kobikichō). Until the establishment of Kabukiza in the Meiji era, Moritaza was the most renowned kabuki theater in Edo.

It was at just after the Genroku period that an incident occurred that almost threatened the existence of kabuki: the Ejima-Ikushima affair of 1714.

Ejima was the name of a high-ranking lady in the Ōoku—the Shōgun’s harem at Edo Castle. She left the castle to visit two temples in the city called Kan’eiji and Zōjōji, and then went to Yamamuraza to enjoy a kabuki performance. After the performance had ended, she invited the actor Ikushima Shingorō and others to partake of more festivities at a tea house. In the revelry, she missed the appointed hour to return to Edo Castle. This was considered a scandal and the outrage that ensued shook the foundations of the shogunate. Ejima was placed in the custody of a feudal domain located in present-day Nagano Prefecture, far from the capital; Ikushima was exiled; and Yamamuraza was destroyed. All told, over a thousand people were punished as a result of the scandal.

Kabuki was saved from its crisis by the second kabuki actor to use the stage name Ichikawa Danjūrō. He streamlined the theaters, dispensing with late-evening performances, in a bid to safeguard the three remaining theaters.

There is an old saying: “Fires and quarrels were the flowers of Edo.” As this might suggest, kabuki theaters frequently had to contend with blazes that engulfed the city’s wooden structures. Both Nakamuraza and Ichimuraza were damaged by the huge conflagrations that swept Edo in 1681 and 1684. Another fire, in 1683, killed some 3,500 people and both theaters caught fire.

That particular fire was mentioned in a famous story by the writer Ihara Saikaku. In it, a 16-year-old character named Yaoya Oshichi, the daughter of a greengrocer, is forced from her home by the fire. She subsequently falls in love with a temple page while her house is being rebuilt. When the new house is ready, the girl has to leave the temple with her family but is desperate to meet with the page again. Thinking that another fire might offer her the opportunity to be reunited, she sets fire to the new house. The fire was quickly extinguished but she is convicted of arson and sentenced to death. Because of this story, the fire came to be known as the “Oshichi Fire” and the tale is often performed at kabuki theaters as well.

Beset by Natural Disasters and War

Following the 1868 Meiji Restoration, when Edo became Tokyo, a new prestigious kabuki theater was created. This was Kabukiza, built in 1889. Over the course of its 120-year history, the theater has had to overcome numerous hardships and challenges. In 1921 a short-circuit sparked a fire that led to serious damage. And just two years later, when the theater was still being rebuilt, the Great Kantō Earthquake struck. This disaster completely destroyed the wooden interior, forcing the reconstruction to be temporarily suspended. The next crisis came during World War II, when a 1945 air raid demolished the main roof.

Kabukiza was built to be a stage for drama—and it turned out to be so in more ways than one. And this is coupled with a strong theme of revival that runs throughout its history. 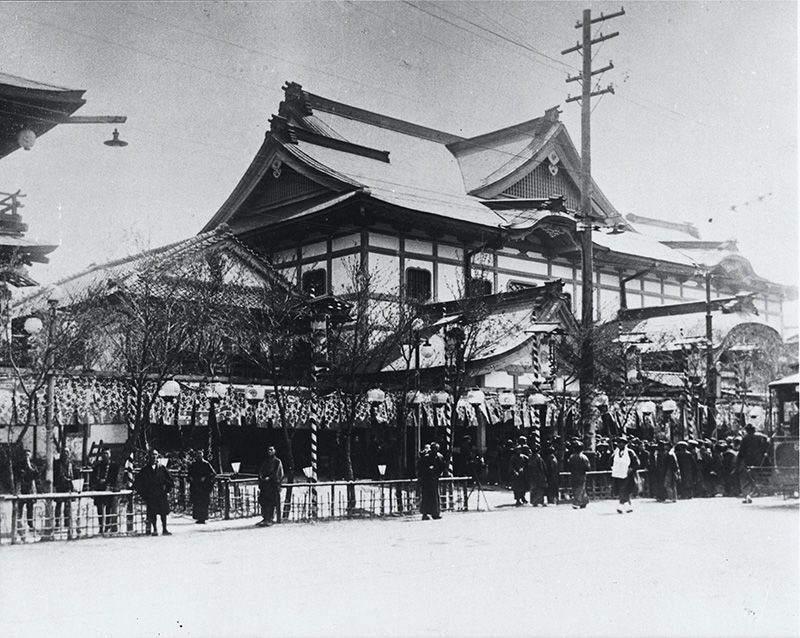 Overtaking Some of the Largest Theaters in the World

Kabukiza is run by Shōchiku Co. Ltd., and at a March 18 press conference held at the Japan National Press Club the company’s president, Sakamoto Jun’ichi, declared that the new theater would “return to kabuki to its roots by placing the emphasis on performances that are both artistic and popular.” He also pledged that Kabukiza would strive “to foster a better understanding of Japanese culture around the world.”

Already, of course, Kabuki is an art form that has enjoyed a considerably international following over the years. Charlie Chaplin and Jean Cocteau, to take just two examples, both attended kabuki performances. Indeed, Cocteau’s 1946 film Beauty and the Beast  is said to have been heavily influenced by the kabuki play Kagamijishi performed by Onoe Kikugorō VI.

At the press conference, Sakamoto also announced that the new Kabukiza will aim to increase its annual audience figures to 1.1 million theater-goers, from the current level of 900,000. Considering that such renowned theaters as La Scala in Milan, the Vienna State Opera House, and the Metropolitan Opera House in New York attract somewhere between 500,000 to 900,000 audience members a year, this is an impressive goal.

Suntory Museum of Art
“Kabuki: Theaters During the Edo Period” exhibition
(Held from February 6 to March 31, 2013)

(Originally written in Japanese. The photograph in the banner is courtesy of the Tokugawa Art Museum and unauthorized reproduction is prohibited.)