Culture Nov 13, 2014
The henro pilgrimage route on the island of Shikoku is celebrating its 1,200-year anniversary in 2014. Today people from all over Japan and the rest of the world are walking the circuit of 88 temples that spans the island’s four prefectures. This article looks at the history and charms of the ancient route.

The henro, a walking route that takes in 88 temples on Japan’s southern island of Shikoku, is not only for traditional pilgrims. It also attracts young Japanese interested in boosting their fitness or their spiritual energy at the “power spots” along the way. And more and more foreign visitors are coming to walk the henro too. A growing local movement is pushing to have the route recognized as a UNESCO World Heritage site for its cultural importance to Japan.

The journey begins at Ryōzenji (temple 1) in Tokushima Prefecture, winds through Kōchi and Ehime Prefectures, and then finishes in Kagawa Prefecture at Ōkuboji (temple 88). This adds up to 1,130 kilometers by the shortest route, taking around 40 days on foot or 10 days by bus or train. 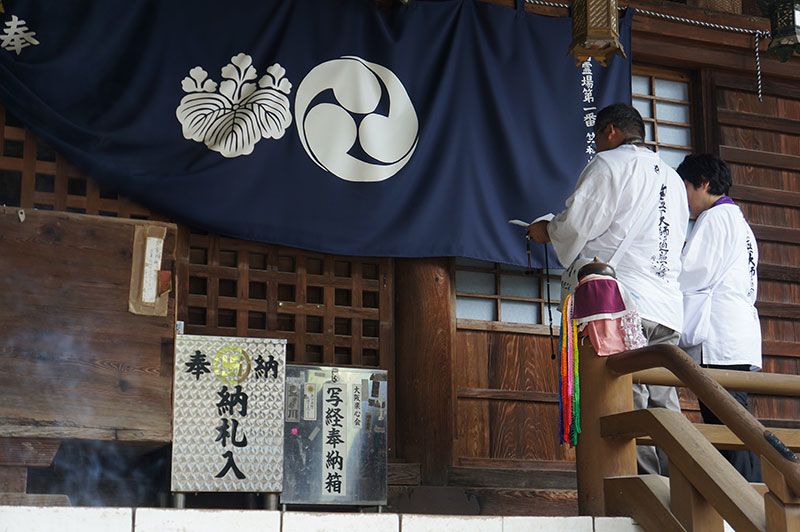 According to legend, the route was established by the priest Kūkai (774–835), who was instrumental in spreading Buddhism throughout Japan. Another story claims that a wealthy man named Emon Saburō turned Kūkai away when he came seeking for alms, and ended up forging the route by walking around in search of the priest to apologize. In any case, the exact religious origins of henro are unclear.

By the seventeenth century, the fame of the henro had spread, and it had become popular among ordinary Japanese. There was even a 1689 guidebook titled Shikoku henro michishirube (Shikoku Henro Road Guide), written by the monk Yūben Shinnen. He became known as the “father” of the Shikoku henro and his book, which contained detailed notes on all 88 temples, remained a bestseller until around the time of the Meiji era (1868–1912). Later the itinerate poet Taneda Santōka (1882–1940) would compare life itself to the henro, and he completed the course twice himself. 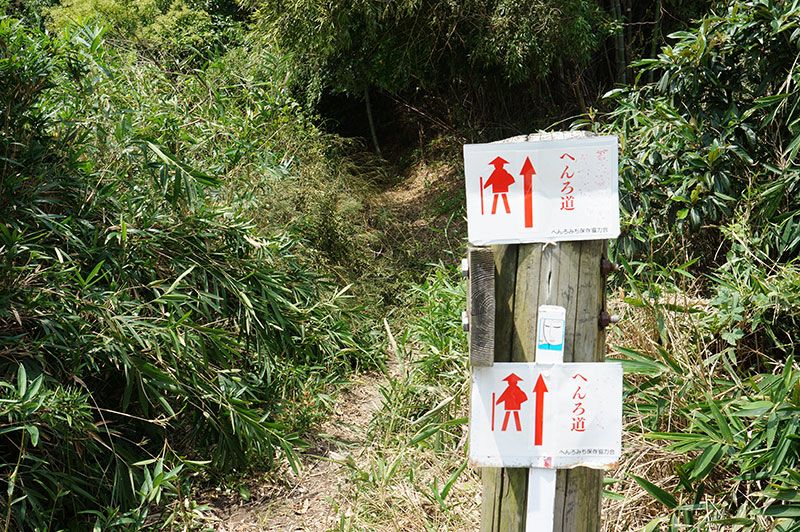 Some of the old henro paths have been preserved.

One of the first foreigners to walk the henro was the American anthropologist Frederick Starr (1858–1933), a professor at the University of Chicago who made the pilgrimage in 1921. More recently, in October 2013 the Spanish Ambassador Miguel Navarro visited the route at Matsuyama, Ehime Prefecture to celebrate the 400-year anniversary of bilateral relations between Spain and Japan. Spain has its own pilgrimage road called Santiago de Compostela, which has been designated as a UNESCO World Heritage site.

Although the standard Japanese word for pilgrimage is junrei, in Shikoku the pilgrimage is called henro. This is believed to derive from the word hendo, meaning “remote region,” as Shikoku is far from Japan’s main population centers. Even so, over the years large numbers of Japanese people have traveled to Shikoku to walk around the island’s 88 temples, often in search of a life-changing experience. 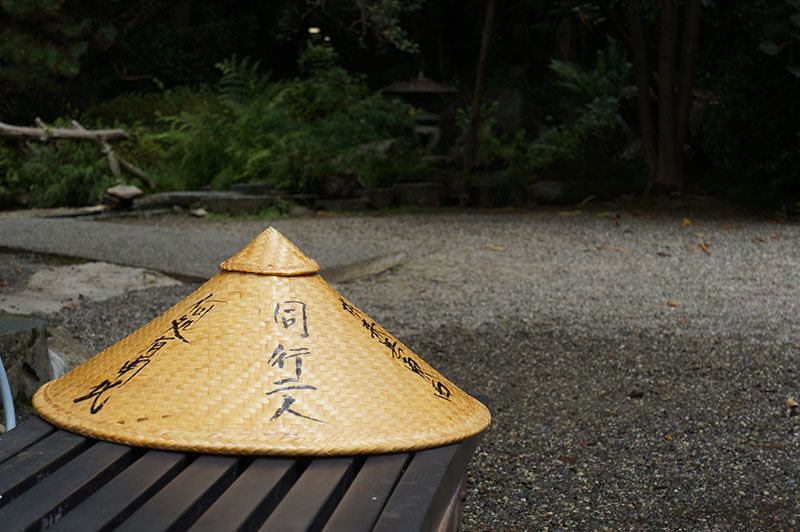 Travelers’ sedge hats have the expression dōgyō ninon (two traveling together) written on them.

The route is broken into four sections, one for each of the island’s prefectures. And each section also represents a different stage in a religious journey. The theme of the Tokushima Prefecture section (temples 1–23) is “Awakening”; Kōchi (temples 24–39) centers on “Ascetic training”; Ehime (temples 40–65) is geared to “Enlightenment”; and the Kagawa section (temples 66–88) takes “Nirvana” as its theme.

During their time spent in Shikoku, pilgrims set aside issues related to family, social position, material belongings, and other worldly ties to focus simply on taking the next step forward in a journey that leads toward self-discovery and personal growth. Usually the pilgrims travel alone, but they are accompanied in spirit by the priest Kūkai at all times, it is said. And this spiritual presence is expressed by the words dōgyō ninin (two traveling together) that is written on the sedge hats that the travelers wear.

The pilgrims are called ohenro-san, from name of the pilgrimage. There is no prescribed clothing that they must wear, but generally the pilgrims dress in white robes and a sedge hat to protect them from the rain and sun. It is now possible to buy henro-related goods at a reasonable price to easily get into the spirit of the journey. 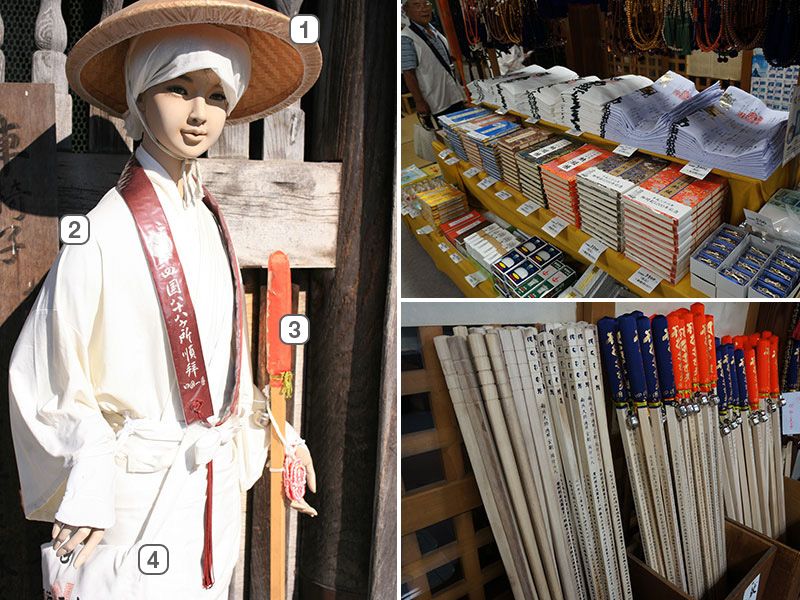 An ohenro-san (pilgrim) mannequin (left) dressed in the traditional conical hat (1) and white robe (2), along with the customary wooden staff (3) and cloth bag (4); an array of goods (right) sold at Ryōzenji (temple 1).

It is said that white is worn because long ago some pilgrims would collapse from the physical exertion and die during the pilgrimage, and the white robes could serve as their burial clothes. The color white also carries the meaning that all pilgrims are equal in front of the Buddha.

Offerings of food and shelter to pilgrims are another important part of the henro. Such selfless gestures are considered a way of giving thanks to Kūkai. But walking around the pilgrimage with the aim of receiving free offerings is looked down on as violating the henro spirit.

Each of the temples along the route has its own particular associations. For example, Kōnomineji (temple 27) is known for its water, which is said to have healing properties. The temple is also associated with the visit of Mitsubishi founder Iwasaki Yatarō’s mother to pray for her son’s success.

Unpenji (temple 66), meanwhile, is popular for its eggplant-shaped seat; it is said that any prayers made while sitting on it will be granted. Zentsūji (temple 75) is known for its June ceremony commemorating the arrival of the noodle dish sanuki udon from China, which is now a local favorite in Shikoku.

When it comes to historical associations, the legend of the henro’s origins was passed down at Ishiteji (temple 51). In 1795, the haiku poet Kobayashi Issa visited Sankakuji (temple 65). In the twelfth century, the poet and priest Saigyō built a hut at Mandaraji (temple 72) and stayed there for over seven years. Since he often took a nap on the flat stone in front of the temple’s main hall, it is known as “Saigyō’s napping stone” to this day.

The “Henro” Hostel for Foreign Guests

More and more foreigners are walking the pilgrimage route in Shikoku as interest in it increases overseas. American Matthew Iannarone and his Japanese wife Noriko run the Sen Guesthouse, in Matsuyama, Ehime Prefecture, providing support to foreign visitors who want to experience the henro. The hostel opened roughly two years ago, and already around 5,000 guests have stayed there, mainly from North America and Europe. 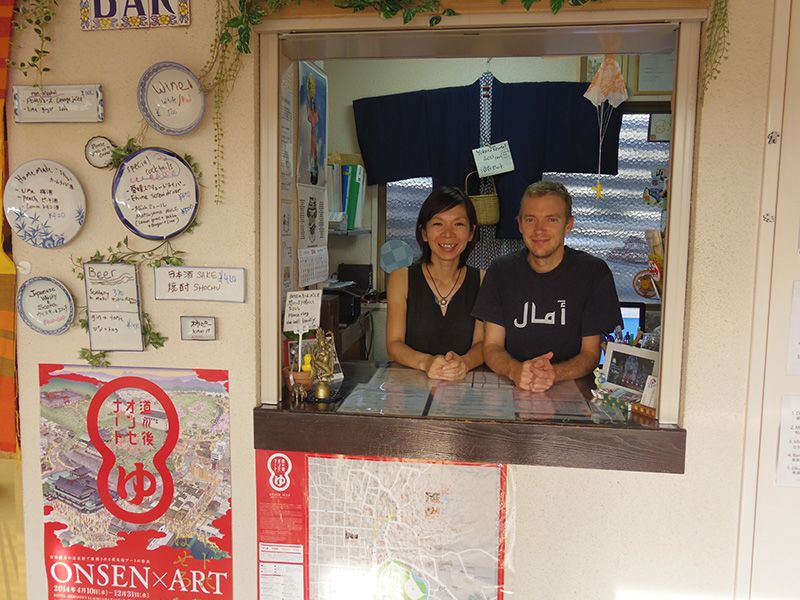 Matthew and Noriko Iannarone at the Sen Guesthouse hostel.

Iannarone was born in Texas. At university he majored in anthropology, spending three years in South Korea before coming to Japan. He first heard of the henro from a Japanese traveler he met while on the Route of Santiago de Compostela. Later he came to Shikoku and walked around all 88 temples in 40 days. Iannarone explains some of the differences between the Japanese and Spanish routes:

“The henro forms a circle, whereas the Road to Santiago is a straight line. And in Spain, people drink wine every day and enjoy themselves during the pilgrimage, but the henro is hard. There are hills and valleys, so it’s tough and really exhausting. But walking the henro is a special, profound experience, and deeply religious.”

Regarding Japanese religion, he notes the “strange and interesting fact that people believe in both Shintō and Buddhism, which even globally is unusual.” He is also impressed that “people have passed down the story of Kūkai to the present day and safeguarded that culture.” Iannarone points out that few people in the West have heard of the Shingon school of Buddhism founded by Kūkai, whereas Zen is extremely well-known.

Many of the foreign tourists who stay at the Sen Guesthouse are interested in gaining a deeper understanding of Japanese religion and culture, says Noriko Iannarone. She tells us that the majority of hostel’s foreign guests come directly from overseas countries, rather than foreigners living in Japan, but many of them have lived in Japan before.” Noriko and her husband make a point of teaching visitors not only the basics of walking the henro and pilgrimage etiquette but also about the Heart Sutra that pilgrims chant and other more detailed information.

Most of the guests found out about the Sen Guesthouse through websites like Rakuten Travel or the Lonely Planet guidebook. Prices at the hostel range from ¥2,700 for a place in one of the dormitory to ¥4,500 for a single room or ¥7,000 for a twin room. On average, visitors stay two nights, although some have stayed for as long as a month or more.

With more and more foreign visitors taking part, the once obscure henro has grown into a globally recognized tradition. 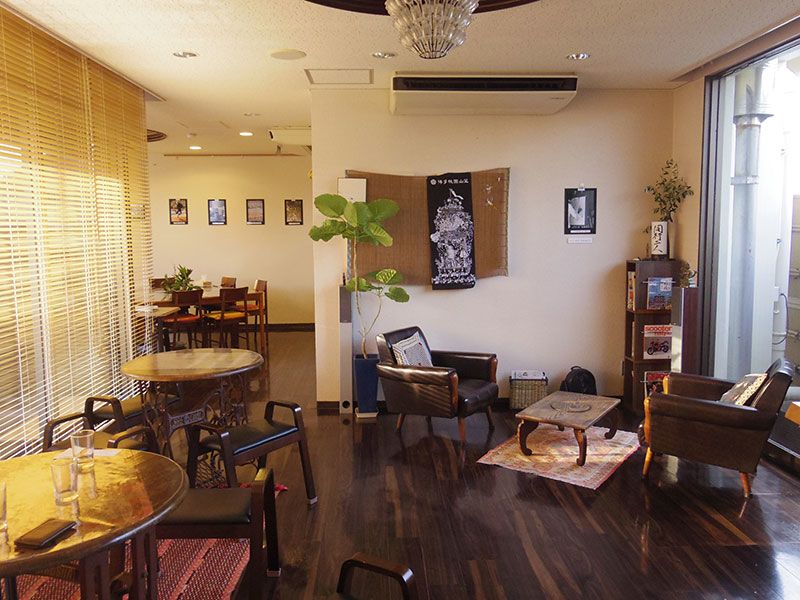