Ozu Yasujirō: New Discoveries in the Half-Century Since His Passing

In Search of Ozu Yasujirō

Culture Jan 3, 2014
Film director Ozu Yasujirō died on December 12, 1963―his sixtieth birthday. Over the course of the 50 years that have passed since then, numerous attempts have been made to interpret his works. What is it about Ozu’s films that captivates scholars and cinephiles around the world? Okada Hidenori looks at the evolving appreciation of Ozu's films and explores their enduring appeal.

December 12, 2013, marks 110 years since the birth of film director Ozu Yasujirō, and 50 years since his death. As many film-lovers know, Ozu died on his sixtieth birthday—an episode that somehow seems to epitomize this filmmaker who was always so meticulous about order and composition within the screen. While holed up writing in the mountains of Nagano Prefecture a few years beforehand, Ozu wrote an enigmatic entry in his diary that seemed to predict his life would end at the age of 60. In contrast with the larger-than-life stories surrounding his contemporary Kurosawa Akira,(*1) the anecdote is symbolic of Ozu and his dedicated pursuit of perfection and precision in his works.

How Have Ozu's Films Been Viewed to Date?

Take Early Summer (1951) or Tokyo Story (1953). What do you see in Ozu Yasujirō's films? For a long time, the accepted view was that the many celebrated works he made during his mature period were somehow emblematic of Japan itself. Of course, they do contain representations of Japanese families living in Japanese-style wooden dwellings, and are at times highly revealing of the Japanese behavior and lifestyles of the time.

A daughter's marriage, the loss of an elderly parent, generational clashes . . . Japanese audiences at the time more or less accepted such portrayals of their society in Ozu's films. After his death, this became the standard way of appraising his work.

Two good examples of this are Donald Richie's(*2) Ozu, published in the United States in 1977 and translated into Japanese the following year, and Satō Tadao's(*3) great work Ozu Yasujirō no geijutsu (The Art of Ozu Yasujirō, 1978). Typical of this approach is Richie's choice of the collapse of the traditional Japanese family, exemplified in Tokyo Story, as his book's main theme. 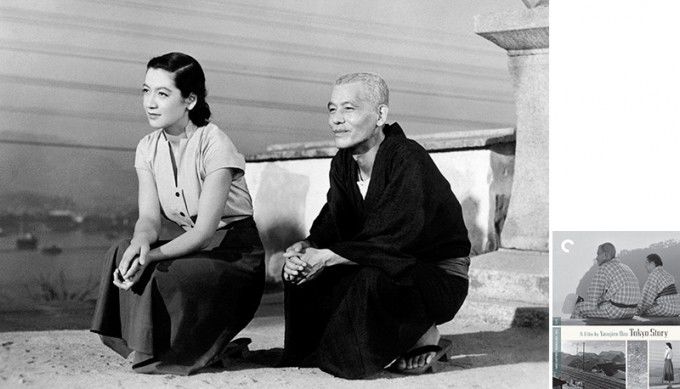 In Ozu's films, the camera never pans left and right. It rarely moves at all. The director shunned low- or high-angle shots and other “dramatic” compositions, and always instructed his cinematographer to place the camera in a low position. Only a 50-millimeter lens was used. As a result of these techniques his films have frequently been regarded as “flat,” right from the time of their release. Many junior staff at Shōchiku's Ōfuna studio where Ozu did most of his work apparently thought of him an old master set in his ways, continually remaking the same film over and over again. 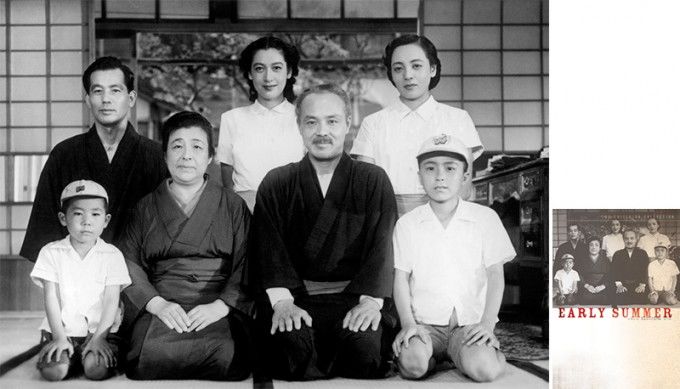 Perhaps because of that, it took longer for Ozu's works to be noticed overseas than those of his peers Kurosawa Akira and Mizoguchi Kenji.(*4) In the early days, many people were unsure of how to react to them. When François Truffaut,(*5) standard-bearer of the French New Wave,(*6) encountered one of Ozu's films for the first time, his impression was that it solely captured spiritless people with spiritless camerawork.

The Discovery of Ozu as a Transgressive Auteur

But is it really true to say that Ozu's films are slow and spiritless? And are they even emblematic of Japanese aesthetics in any real sense? The first major study to argue against these stereotypical views was Hasumi Shigehiko's(*7) Kantoku Ozu Yasujirō (Director Ozu Yasujirō), published in 1983. By citing actual examples of Ozu's screen compositions, the book makes the case that his corresponding shots of characters looking at each other, not to mention his trademark low camera positions, were in no way explorations of  “Japanese-ness.” In fact, they were radical innovations in cinematic style. 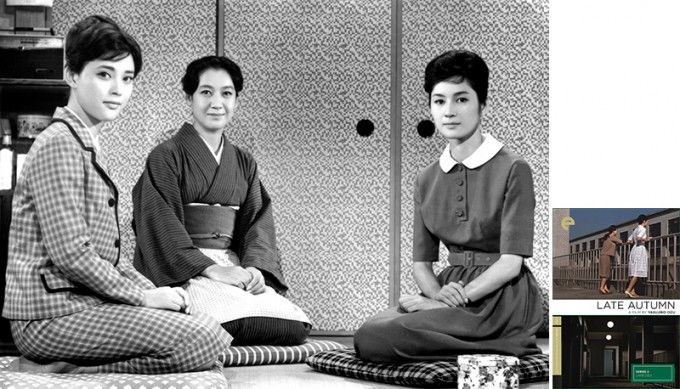 Indeed, the more you examine Ozu's later works, the more peculiar their editing appears. In film, there is a set “grammar” that applies to lines of sight in alternating shots when two characters talk to each other, but Ozu often transgresses boldly against this grammar, while remaining completely in control. Such moments have a remarkable power to jolt the audience into surprise.

It was around this time that international acclaim for Ozu began to enter a new phase―as symbolized by the release in 1985 of Wim Wenders'(*8) documentary Tokyo-Ga, a work deeply imbued with the director’s admiration of Ozu's films.

New light was shone on some of Ozu's early works that had not been accessible to most critics until then. These early efforts, including silent films, clearly assimilate the contemporary style of Hollywood films. Dragnet Girl (1933) for instance is simply a gang movie―the only one Ozu ever made―a kind of homage to the American films he adored. Actress Tanaka Kinuyo,(*9) who later played the persevering female protagonist of Mizoguchi Kenji's The Life of Oharu (1952), portrays a flamboyantly dressed gun-toting denizen of the night.

Films’ international distribution gives them a rare ability among works of art to transcend national borders. The closer scrutiny given to Ozu's early, American-influenced works could bring about a greater focus on the huge changes in his distinctive style after World War II.

Ozu, the Man and His Times

In order to delve deeper into Ozu's work, we need to study the man himself and the times in which he lived.

Ozu studies reached a new level of sophistication with the pioneering work of cultural historian Tanaka Masasumi,(*10) thanks to his radically different approach. Tanaka, a painstakingly thorough bibliographer, has spent a remarkable number of hours sifting through old newspapers and magazines. Since the release of Ozu Yasujirō zen-hatsugen 1933–1945 (Ozu Yasujirō: Complete Interviews and Pronouncements, 1933–45) in 1987, he has succeeded in presenting the life and works of Ozu, the leading film director of a modernizing Japan, as a single “universe.”

One of the most revealing aspects of Tanaka’s research concerns the time Ozu spent in China as a soldier with the Imperial Japanese Army from 1937 to 1939. The military authorities granted him no special favors because of his status as a man of culture, and Ozu trudged through the same battlefields with his comrades as an ordinary infantryman. Based on his vast collection of materials, Tanaka concludes that Ozu must have experienced the horrors of war as a member of the invading Japanese armies. And the reader gets the impression that these experiences must have been crucial to the formation of Ozu's postwar incarnation as a dedicated formalist.

Ozu was a filmmaker who adhered to an extremely distinctive aesthetic. But that is not to say he was able to evade the circumstances of his era. Ozu’s intimate relationship to the events of his time is made solemnly clear by Tanaka's writings. So far, very little by this fiercely independent scholar who has eschewed academia throughout his career has been translated into foreign languages.

Over the years, all kinds of books have been published in Japan based on a character-based approach.In late 2013, yet another new approach is being attempted. These new studies represent an effort to interpret the life and work of Ozu as an ultra-modernist. He had close connections with Japan’s master painters of the time, incorporated an appreciation for graphic design into his work, wrote a unique lettering style, and had a superlative sensitivity as a colorist. The results of this new approach can be seen in an exhibition titled Iconography of Yasujiro Ozu, put on by the National Film Center of the National Museum of Modern Art, Tokyo. This analysis of the degree to which the static arts nourished Ozu's creation of kinetic art―his films―has only just begun.

In 2012, the British film journal Sight & Sound named Tokyo Story as the greatest work of cinema ever made, based on a poll of 358 directors from around the world. This is a cause for celebration, but it might be doing his work a disservice by bestowing this honor and special status on Tokyo Story alone. Ozu's entire filmography represents a formidable and multifaceted body of art. People around the world will surely continue to discuss and analyze his films for many years to come. 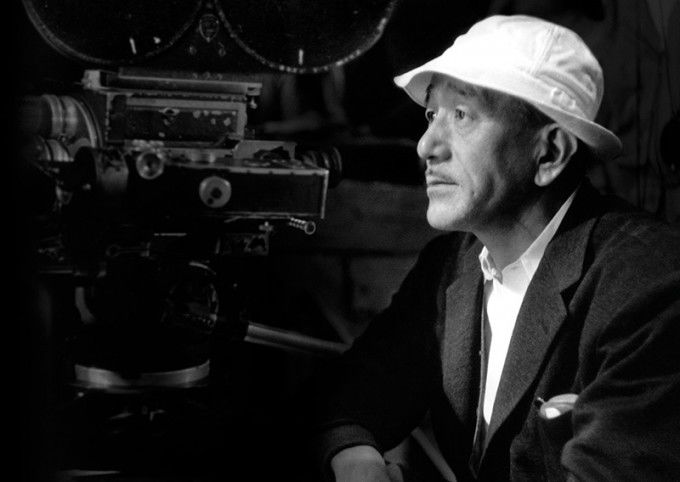 (*4) ^ Mizoguchi Kenji (1898–1956)
Film director. Famous for his unique realist approach in depicting the lives of oppressed women. Noted works include Sisters of the Gion, The Life of Oharu, Ugetsu, and A Story from Chikamatsu (also known as The Crucified Lovers).

(*5) ^ François Truffaut (1932–84)
French film director. Became one of the leaders of the French New Wave movement with his directorial debut The 400 Blows. Other works include Jules and Jim and Two English Girls.

(*6) ^ French New Wave (Nouvelle Vague)
A cinematic movement originating in France in the late 1950s, in which young filmmakers attempted to defy conventional techniques by employing methods such as improvised direction and  visual authenticity.

(*7) ^ Hasumi Shigehiko (1936–)
Scholar of French literature, film critic, and former president of the University of Tokyo. His lectures on the expressive language of cinema at Rikkyō University had a major influence on future filmmakers Kurosawa Kiyoshi, Aoyama Shinji, and Suō Masayuki.

(*8) ^ Wim Wenders (1945–)
German film director. Has been described as the standard-bearer of road movies, and is said to have been heavily influenced by Ozu's films. Noted works include Paris, Texas and Wings of Desire.

(*9) ^ Tanaka Kinuyo (1909–77)
One of the greatest actresses in Japanese film history. Frequently appeared in Ozu's works, including A Hen in the Wind. Best known for her performances in films such as Aizen Katsura, The Life of Oharu, and Sandakan No. 8.