Culture Travel Jan 16, 2015
The Sapporo Snow Festival, one of the biggest events in the region’s winter calendar, attracts tourists from all over the world. But it all started from just six snow statues made by local teenagers.

In the Bleak Midwinter

Local high school students hard at work on a snow sculpture in 1950.

The Sapporo Snow Festival, organized by the city government and the Sapporo Tourist Association, started all the way back in 1950, when a group of local high school students was assembled to sculpt six snow statues in the city’s Ōdōri Park, a place which in previous winters had typically been used only for the dumping of snow cleared from the surrounding streets. In the midst of those bleak postwar years, when even food and other bare essentials were scarce, this group of students—without any knowledge or experience of snow sculpture—took up tools and fashioned a series of three- to five-meter-high snow statues under the patient guidance of their art teachers.

When the statues were complete and the day of the festival arrived, the exhibition of snow sculptures was accompanied by dog races, dances, performances, and other carefully planned events that combined to attract some 50,000 locals. Because the festival represented a welcome chance for the people of the town to enjoy themselves in the long, dark Hokkaidō winter, it was tremendously well received. Beginning with the second installment the following year, the Sapporo Snow Festival was declared an annual event. Year upon year thereafter, the sculptures grew more and more elaborate as the festival increased in scale. 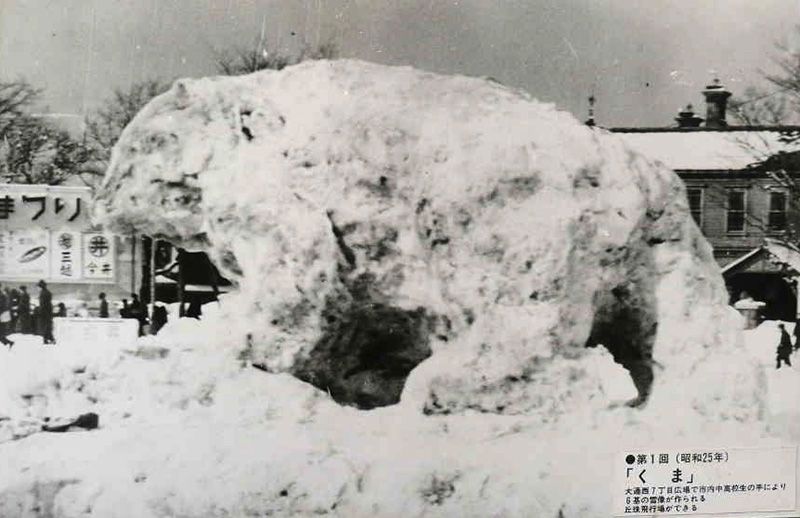 Kuma (Bear): A sculpture from the first Sapporo Snow Festival

Breathtaking Beauty of the Ascension 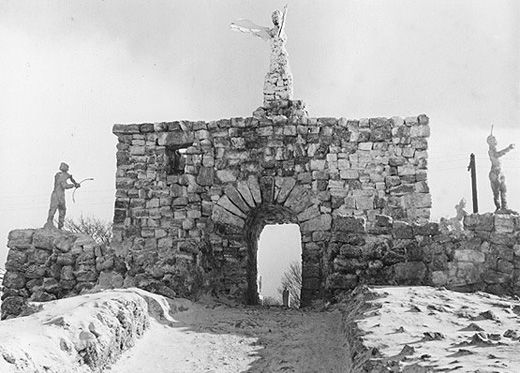 Shōten (The Ascension), the first snow sculpture of its size, in 1953.

The fourth festival in 1953 is remembered for a giant snow statue entitled Shōten. At 15 meters in height, the piece, whose name means “The Ascension,” was three times the size of the sort of sculptures that had previously been the norm. Spectators were stunned by its breathtaking scale.

The first involvement of the Japan Self-Defense Forces came at the sixth festival in 1955. This was stepped up in 1959, when 2,500 JSDF personnel were mobilized to take part in the construction of numerous large sculptures. This was also the year in which national newspapers and television first picked up on the Sapporo Snow Festival, in turn sparking an increase in the number of tourists visiting from the islands to the south as the festival became known throughout Japan.

Self Defense Force Troops at the Sapporo Snow Festival. 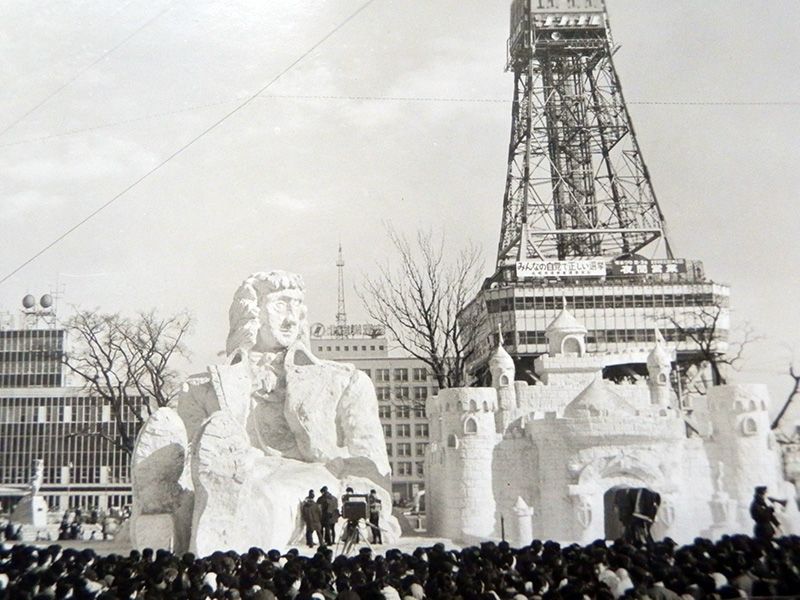 From the sixteenth installment of the event in 1965, a second festival site was established at the Ground Self-Defense Force camp at nearby Makoma. Gigantic snow sculptures fitted with slides and statues in the shape of Doraemon and other popular children’s characters ensured that the new site was crammed with visiting families. A few years later, when Sapporo hosted the 1972 Winter Olympics, the attention focused on the area from all over the world meant that the Snow Festival also started to gain global recognition.

Toward a Truly International Event

Things ran less smoothly in 1974, though, as the impact of the 1973 oil crisis led to difficulties in procuring the gasoline needed to transport the huge amounts of snow required for statue building. Conditions cast the entire twenty-fifth festival in doubt. To compensate for the lack of snow, 800 steel drums were brought in to fill out the frames of the larger statues. Although this technique saved the event as a whole, the sculptures were less stable and started to melt more easily than if they had been made of solid snow. The resulting sense that the exhibits could collapse at any moment made it a rather nervy wait until the end of the event. 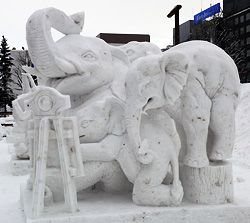 On a brighter note, 1974 also saw the Snow Festival take on a decidedly more international flavor, as the first International Snow Sculpture Contest was held. The six countries with teams taking part were Canada, France, the United States, South Vietnam (now part of Vietnam), South Korea, and Japan. Spectators were charmed by the distinctive national character of the various entries. Subsequent years have seen the roster of participating nations swell to include Germany and Australia, as well as entries from specific cities, including Shenyang in China, Portland, Oregon, in the United States, and Daejeon in South Korea. These contributions from overseas teams have helped to create what is now a truly multicultural event.

At the thirty-fourth festival in 1983, a third site was established in Sapporo’s Susukino area. At this site, still a festival mainstay, the focus is on sculptures made from ice, rather than snow. At night the streets of the well-known entertainment district are lined with crystalline carvings illuminated with neon lights. Although Makoma base was replaced after 2005 as the festival’s second site by the immense Tsudome complex, the festival’s tradition of introducing new and imaginative snow-based attractions like slides and snow rafts remains unchanged. Inside the dome, there is also a spacious rest and refreshment area, as well as a family play area and more. The snow festival presents an opportunity to enjoy all the best aspects of winter in Hokkaidō. Taking in the distinctive characteristics of the three separate sites is another of the festival’s many pleasures. 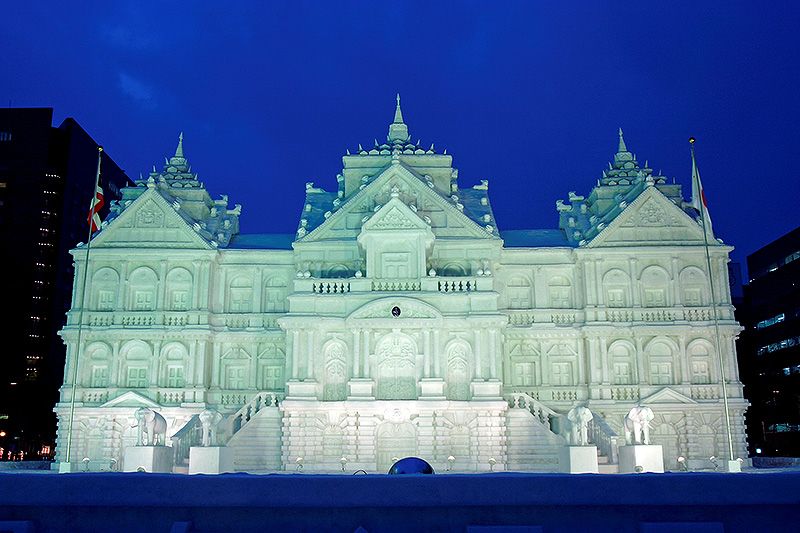 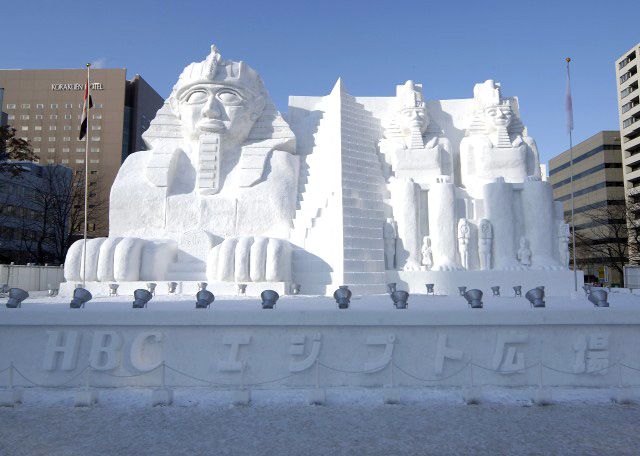 In 1984, the festival period was lengthened from five days to seven, making the event more accessible to visitors from around Japan and all over the world. In recent times, the spirit of participation by local people has become even stronger, too. Since the fifty-third festival in 2002, around a thousand volunteers each year have helped to construct some of the largest statues. There is now a dedicated organization providing volunteers to take part under the direction of the construction teams. Accordingly, it is now not uncommon to see families visiting from outside the area, foreign exchange students, and many others enthusiastically taking part, stirred into action by their first taste of the Hokkaidō snow. Nowadays there are also numerous smaller sculptures produced by volunteer groups, but the popularity of the festival is such that there are generally as many as five to six times as many applicants as can actually take part. 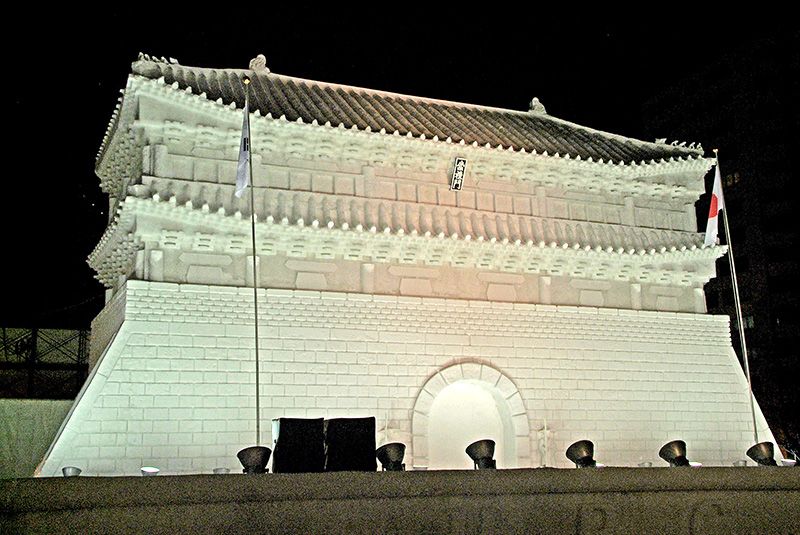 In 2013, cutting-edge projection mapping technology was introduced to cast dazzling, striking images onto the surface of some of the sculptures. Unfortunately, on this first occasion, so many people flocked to see the new attraction that the performances scheduled for the last two days of the festival had to be cancelled due to safety concerns. In 2014, with the use of projection mapping expanded to all three festival sites, the sixty-fifth Sapporo Snow Festival reportedly attracted a massive 2.4 million visitors.

What started more than six decades ago as a fun and creative way to use up surplus snow has developed into a large-scale event with a truly global reach. And it seems clear that the Sapporo Snow Festival will continue to build on this fine tradition by evolving and expanding long into the future. 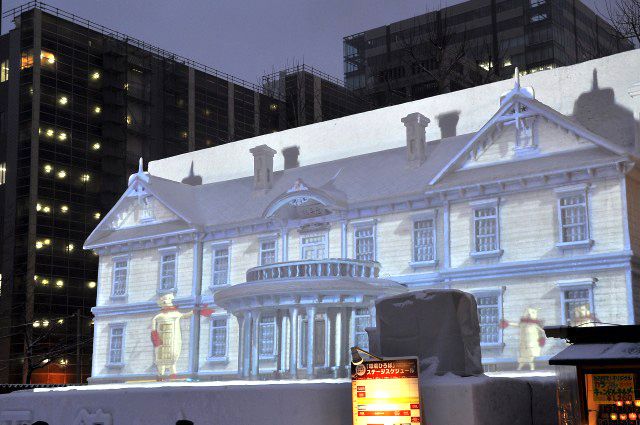