A Century of Dreams and Romance: A History of Japan’s All-Female Takarazuka Revue

Culture Jun 4, 2014
In its first century of existence, the Takarazuka Revue has grown to occupy one of the central positions in Japan’s entertainment world. All the performers are female, contributing to the unique nature of its shows. Past hits have attracted droves of fans to the company’s two theaters, but the Revue continues to develop new shows as it hopes to bring its own special brand of musical theater to more overseas audiences.

April 1, 2014, marked the hundredth anniversary of the first performance by the all-female Takarazuka Revue, known for its lavish musical theater. The Revue puts on shows year round, offering its distinctive brand of dream-filled romance to legions of mainly female fans at its theaters in Takarazuka, near Osaka, and  in central Tokyo. Most of its 400-plus performers belong to one of five themed troupes (Flower, Moon, Snow, Star, and Cosmos), but there are also skilled performers who float between the troupes as necessary. Each troupe performs 10 shows a year.

The first Takarazuka performance, on April 1, 1914, was held as entertainment for tourists at a hot spring resort. The company was the brainchild of Kobayashi Ichizō (1873–1957), the founder of the Hankyū Tōhō Group and a brilliant businessman. Kobayashi was also known as a man of culture with a love of the tea ceremony, fine art, and theater.

In May 1911, Kobayashi opened the Takakarazuka New Spa, an entertainment facility in Takarazuka, the final stopping point on a line of his Minō Arima Electric Railway (now Hankyū Railway) connecting to central Osaka. His idea for an attraction that would bring in audiences and increase passengers on the line was a musical theater group consisting only of girls.

In 1913, Kobayashi hired 16 girls in their mid-teens. The next year they performed three times as the Takarazuka Girls’ Revue. These productions, presented to audiences free of charge, took place at a theater converted from an indoor swimming pool in a building attached to the main resort. The popularity of the Revue among tourists led the performances to be held regularly, four times a year. In 1918, the girls appeared at the Imperial Theater in Tokyo, and by 1924 they had their own Takarazuka Grand Theater with a capacity of around 4,000. The Revue’s second venue, the Tokyo Takarazuka Theater, opened in 1934. The group had come a long way in a short time. 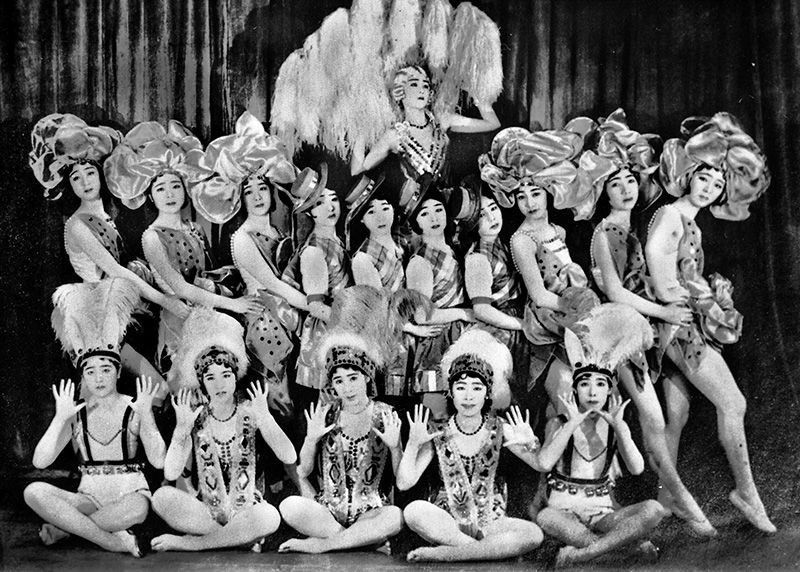 This was the golden age of the “revue” that appears in the name of the company, a spectacular concoction of song and dance that was popular then, especially in France. The chorus lines and grand staircases, still so essential to Takarazuka productions, appeared at this time. However, World War II brought leaner times. In 1944 both theaters were requisitioned by the military and then held briefly by the Allied Occupation authorities before being returned in 1946.

The Rose of Versailles Boom

In the immediate postwar era, the performer Kasugano Yachiyo came to fame playing male characters, establishing the gender-crossing role of the otokoyaku as a key part of the Takarazuka experience. She was dubbed the “White Rose Prince” for her handsome looks.

In 1974, an adaptation of a manga serial about a beautiful girl raised as a man, Berusaiyu no bara (The Rose of Versailles), gave the Takarazuka Revue its biggest hit ever. The production, now inextricably associated with Takarazuka, made a huge contribution to the company’s current popularity and has been restaged numerous times. Set against the backdrop of the French Revolution, the musical performance centers on the hero(ine) Oscar, a girl who was raised as a boy to inherit her father’s estate, and portrays her relationship with a childhood friend, André, as well as the relationship between Queen Marie Antoinette and the Swedish Count Axel von Fersen. 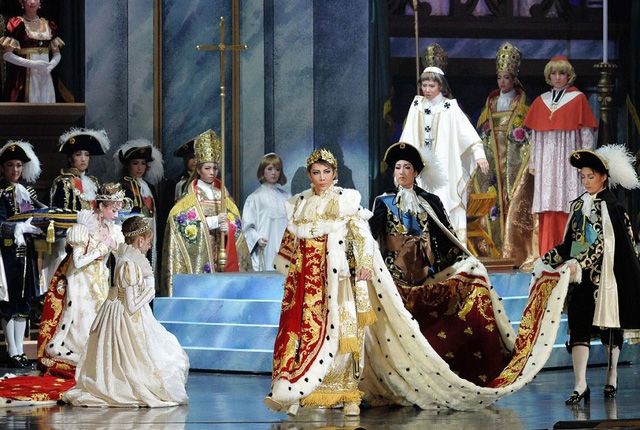 Nemuranai Otoko: Naporeon (Napoleon: The Man Who Never Sleeps) performed by the Star troupe in January 2014 at Takarazuka Grand Theater.

The original manga by Ikeda Riyoko, serialized in a girl’s magazine, was faithfully adapted for the stage by Takarazuka’s playwright, lyricist, and director Ueda Shinji. The cross-dressing heroine was perfectly suited for the company’s repertoire. The tragic love story appealed to starry-eyed girls of all ages, while the show’s romantic, rococo sets lived up to the expectations of fans of the manga—and the result was a smash hit. Restagings switched between different troupes and versions, and within two years there were 560 performances watched by an astonishing 1.4 million spectators. The four performers who emerged as stars from the show, Haruna Yuri, Anna Jun, Migiwa Natsuko, and Ōtori Ran, came to be known as the “four heavenly kings” of The Rose of Versailles.

The Takarazuka Revue has had over 4,000 members. Many former “Takarasiennes,” as they are known, have gone on to apply their singing and dancing talents to successful careers on the stage and screen.

Among the notable Takarazuka graduates, Yachigusa Kaoru starred alongside Mifune Toshirō in the Samurai Trilogy, while Otowa Nobuko played leading roles in the J-horror classics Onibaba and Kuroneko. Other household names in Japan from film, television, and musicals include Asaoka Yukiji, Daichi Mao, Amami Yūki, Kuroki Hitomi, and Dan Rei.

In April 2014, former members returned to the Takarazuka Theater for the hundredth anniversary ceremony and “Dream Festival” show. The presence of so many gifted performers gave the occasion a real sense of history.

“In the East, the University of Tokyo; in the West, Takarazuka” 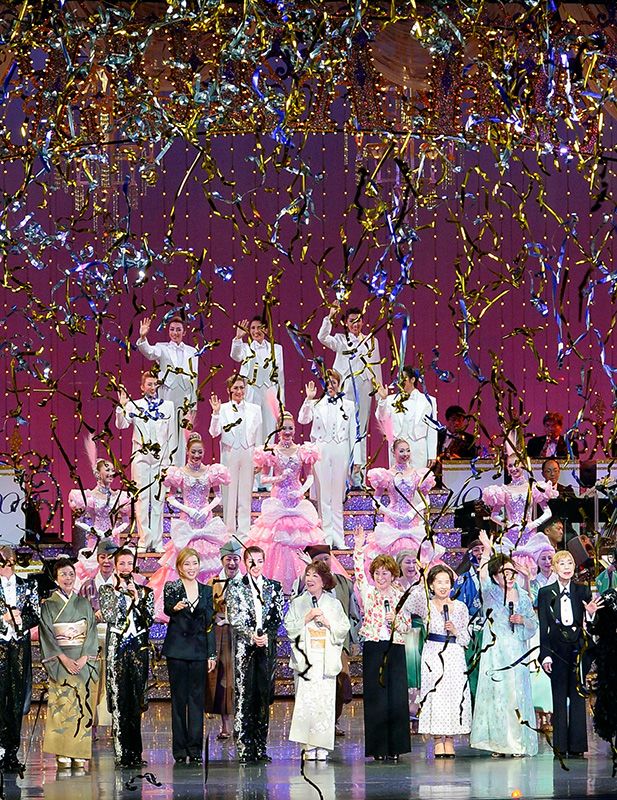 The Takarazuka Revue’s biggest stars of all time taking part in the “Dream Festival” event.

One of the reasons for the enduring success of the company’s unique style of theater is the requirement for budding performers to attend the Takarazuka Music School. Every year, girls with dreams of the limelight come from all over the country to apply for entry. The competition is so fierce that it is compared with that for Japan’s top school in the phrase: “In the east, the University of Tokyo; in the west, Takarazuka.”

Those accepted undertake two years of intense study of ballet, Japanese traditional dance, singing, piano, and other necessary skills. This ensures a steady supply of well-honed talent. The pyramid-style star system is supported by these regular infusions of fresh blood, allowing fans to pick out new favorites from a deep pool of Takarasiennes.

A further strength is that the company trains scriptwriters, directors, and producers, as well as performers. These members assist with productions from the time they arrive, building experience by getting involved with stage work. As the Takarazuka Revue mainly relies on producing new shows, it is essential for staff members to fully understand the company’s ethos and distinctive features.

Another major factor is having a solid corporation like Hankyū Railway as a parent company. The Revue has faced hard times in its century of existence, but Hankyū has backed the undertaking with an extraordinary amount of money and enthusiasm over the years. For Hankyū Hanshin Holdings, Takarazuka remains the public face of the company, as important as the Hanshin Tigers baseball team it also sponsors. 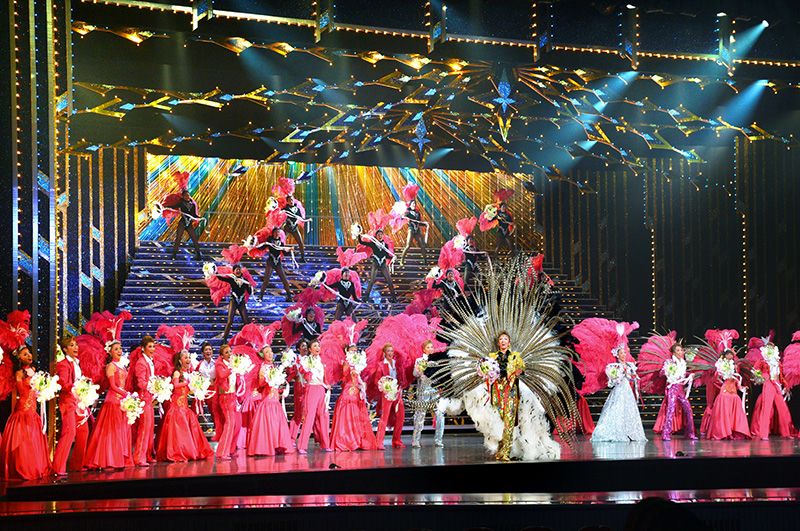 Ranju Tomu leads the Flower troupe in a 2012 performance.

A recent development for Takarazuka is shows adapted from popular works in other media. For example, there have been productions based on the video game Sengoku Basara, which stylishly depicts leading warriors from Japan’s Warring States period (1467–1568), and on the Korean historical TV drama The Legend starring Bae Yong-jun, who has a huge following in Japan. Takarazuka has also joined forces with Sanrio’s Hello Kitty character to offer goods and stage shows blending their respective visions. These initiatives have given the Takarazuka Revue fresh life and helped it to find new fans.

The company is now looking abroad. In April 2013, the Star troupe appeared in shows in Taiwan in the first self-instigated Takarazuka overseas expedition. Previous performances in 24 cities in 17 countries had always been based on requests and invitations for the purposes of international friendship and cultural exchange. However, this time Takarazuka did everything from seeking sponsors to selling tickets. Around 18,000 people attended the 12 sold-out shows over the course of nine days, a major step in establishing the potential for overseas commercial expansion. A second series of Taiwan shows, in which the Flower troupe will present The Rose of Versailles and other works, is planned for August 2015.

Founder Kobayashi Ichizō’s famous phrase, “Purity, Honesty, Beauty,” is the motto of the Takarazuka Revue. But what keeps the company moving forward, facing new challenges in a new era, may be the words he expressed on a separate occasion: “Change in itself is a great art.”