Kobayashi Ichizō: The Visionary Impresario of the Takarazuka Revue

Culture Jun 9, 2014
Kobayashi Ichizō (1873–1957) was a powerful corporate leader, but today he is best remembered as the founder of the perennially popular all-female Takarazuka Revue. What began as a scheme to boost passenger numbers on his railway line grew into a national institution. Nagasawa Takaaki explores the life and ideas of the man behind the musical theater. 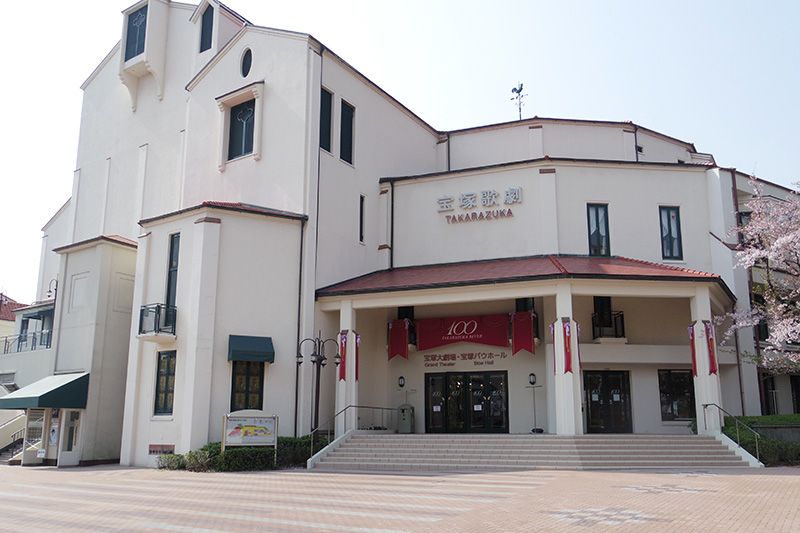 It takes around 30 minutes to get to the city of Takarazuka, the home of the Takarazuka Revue, from Osaka’s Umeda Station via a Hankyū Railway express train. Today fans of the Revue flock to the city, but when the rail connection was established in 1910, Takarazuka was just a village with a mediocre hot springs resort on the right bank of the Muko River. On the left bank, where the Takarazuka Grand Theater now stands, there were only a few farmhouses scattered here and there by a peaceful pine forest stretching along the river.

The train line was built by Minō Arima Electric Railway, a forerunner of Hankyū Railway, but it had few passengers at first, since areas near the stations were sparsely populated and tourists were rare. In 1905, a rival company, Hanshin Electric Railway, established a line linking the major cities of Osaka and Kobe, which was far more popular than the urban-rural Osaka-Takarazuka connection. In order to boost passenger numbers, the founder of the Minō Arima Electric Railway, Kobayashi Ichizō, put into action his long-considered plan of building housing along the line and opening a mass entertainment facility.

The Takarazuka New Spa was built on reclaimed land on the bank across from the existing resort. Its marble baths and magnificent buildings made it a huge hit. However, the indoor pool in the attached “Paradise” leisure center was a disaster, as Kobayashi later described in his autobiography: “As the pool received no direct sunlight, it was too cold to swim in for even five minutes. I didn’t know that foreign swimming pools had pipes to pump in steam underwater and heat them to the right temperature.” 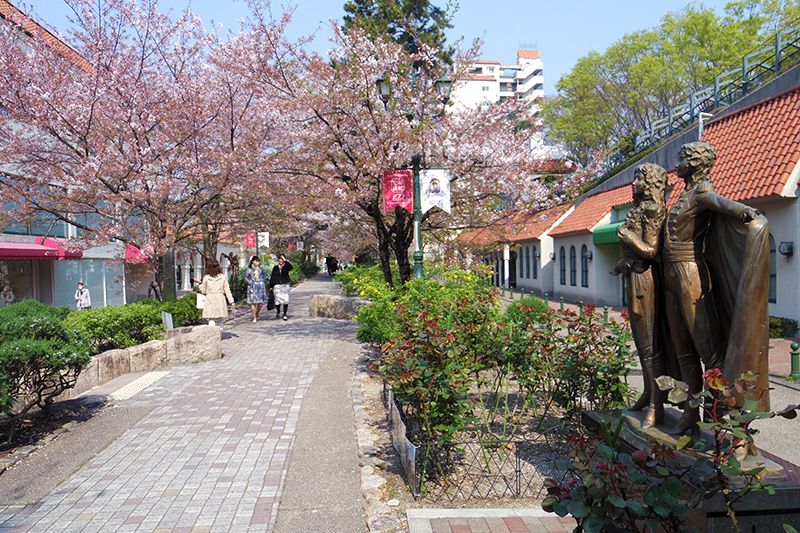 Kobayashi displayed his true brilliance as an ideas man in coming up with a way to make use of the closed-down pool. After draining the water, he renovated the pool into a seating area and the changing rooms into a stage, thus creating a space where girls could sing and perform. Visitors to the resort were granted free admission to the musical theater performances, which soon won over the audiences. During the two-month period of performances, the theater was full to capacity every day. This was the modest origin of what would later blossom into the Takarazuka Revue.

It is worth noting that Kobayashi did not simply throw together a group of girls and rush them up on to the stage. He selected girls who enjoyed singing, taking care that they were from what he considered to be good families. He also paid them higher-than-average wages and took responsibility not only for their musical training but also for their education in morals and manners.

Drawn to the Stage

Kobayashi took inspiration from the youth ensemble that the Mitsukoshi Department Store had used to attract customers in Tokyo. This group of 20 to 30 fresh-faced teenage boy musicians, wearing Western-style clothes and feathered hats worn at an angle, were highly successful in publicizing the store. “For our Takarazuka New Spa,” Kobayashi later wrote in Takarazuka oitachi no ki (The History of Takarazuka), “we imitated this group, and with guidance from Mitsukoshi set up a girls’ musical theater group.”

Kobayashi devoted so much energy to his Takarazuka project out of a love of drama that dated back to his childhood. He was born within sight of Mount Fuji in the city of Nirasaki in Yamanashi Prefecture. According to Mukōyama Tateo, a visiting professor at the University of Yamanashi who lives in the city and has researched the life of Kobayashi, he came from a wealthy merchant family and at a young age frequently attended plays put on by a small theater near his elementary school. Even after entering Keiō University, he continued to regularly attend theater and kabuki performances. He also enjoyed writing and had a novel serialized in the local Yamanashi newspaper.

After graduating from university, Kobayashi joined Mitsui Bank and worked there for 15 years. In part because the staid life of a bank employee did not suit him, while working in Osaka he was attracted to the literary and theatrical world. He spent more and more time in the entertainment district and got to know the men about town who were regulars there. The experience and connections that Kobayashi built up during this time would serve him well when he launched his theater group.

Only unmarried women can perform on the Takarazuka stage. Kobayashi wanted to present his audiences with a dream world far removed from everyday life, and this rule remains even today. Performers also had to undergo two years of hard training at Takarazuka Music School, based on its motto, “Purity, Honesty, Beauty.” This is the fundamental difference between Takarazuka Revue shows and western operas and musicals, which hold auditions for each new production.

In his history of Takarazuka, Kobayashi used a curiously domestic metaphor in describing his dream: “It would be impossible to train men in that way for our productions. In cooking too, perhaps only men can produce something truly excellent, but it is women who rustle up something quick for the family. There are currently between 400 and 500 Takarazuka students and we could not have so many if we included men. There would be non-stop fighting and arguments. There is no room for men in Takarazuka, and it has an atmosphere that could not be created without limiting it to women only.”

More Alluring than a Real Man 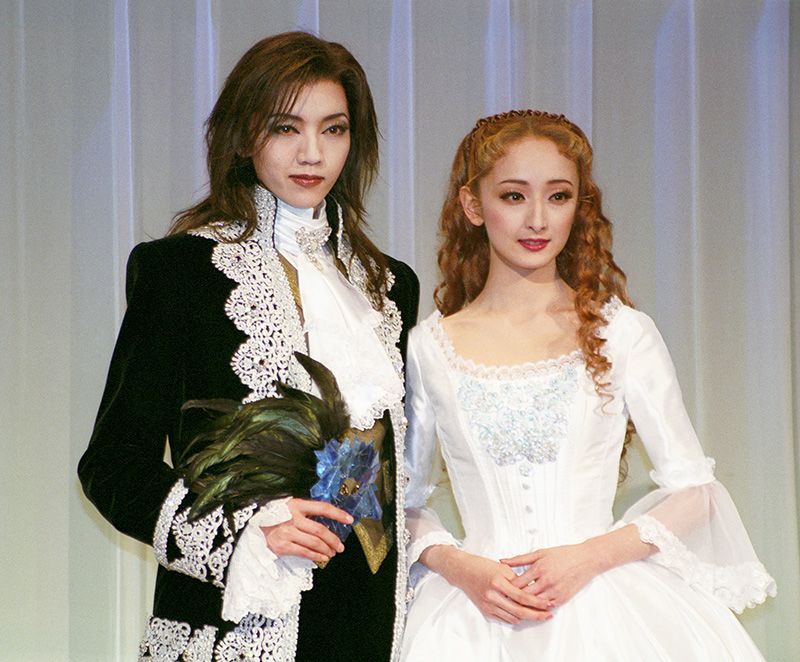 In much the same way that some Japanese products have gradually evolved unique features that differ from international norms, the Takarazuka Revue has developed its own distinctive qualities over its 100-year history. One example is how the Revue has rigidly limited performers to unmarried Takarazuka Music School graduates, instead of opening its doors to highly skilled external talent and professionals suited to a particular production, as Broadway musicals do.

A single-gender approach to traditional Japanese performing arts also exists, of course, in the case of kabuki, in which men play the female roles. Kobayashi noted how such cross-gender casting works to good effect for both kabuki and the Takarazua Review:

“For kabuki there have been attempts at times to cast a woman in the female role, or onnagata, based on the idea that it is unnatural for a man to play a woman, but the very fact that men play female roles is what makes kabuki what it is. In the case of Takarazuka, women playing the male role, called otokoyaku, offer something greater than a man. Nobody knows masculine beauty better than a woman, and if she contrives to become an otokoyaku she can be more alluring to another woman than the real thing. That is where the otokoyaku really shines.”

At the same time, Kobayashi Ichizō was promoting an ideal of “Purity, Honesty, Beauty” among the Takarazuka women. He wished them to embody the highest vision held by many Japanese men of a neat, dignified, and modest woman who would support her man with unswerving devotion. All of the performers, including the otokoyaku, were expected to become good wives and mothers after leaving the company. This was part of the dream Kobayashi was selling on stage.

Aside from theatrical activities, Kobayashi oversaw a number of creative entrepreneurial projects centered on the railway business that targeted ordinary consumers. He expanded the focus of his business from simply taking passengers from one point to another to include development of housing along the railway route and introduced Japan’s first mortgage system. He also opened the Hankyū Department Store at the railway’s Umeda terminal building in Osaka, with an affordable café on the top floor selling popular dishes like curry rice. 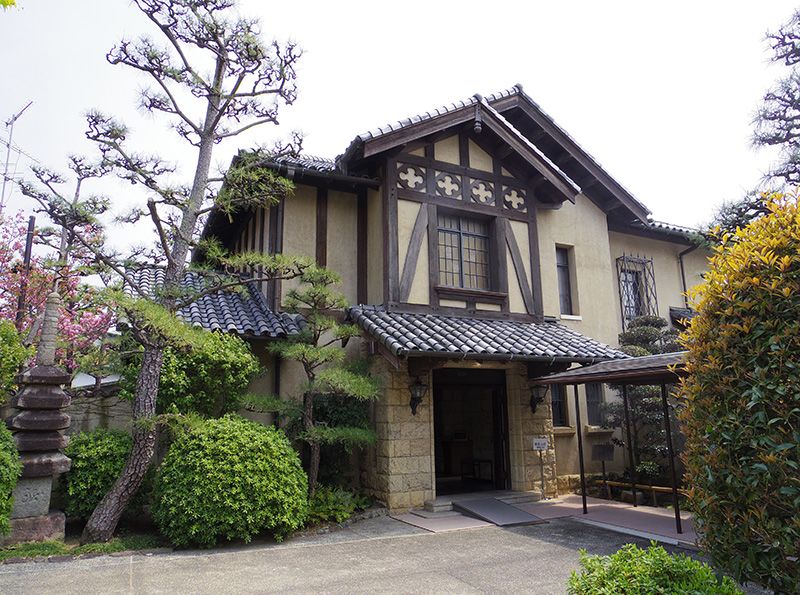 The Kobayashi Ichizō Museum in the city of Ikeda in Osaka Prefecture is housed in Kobayashi’s restored former residence.

In 1938, when he was also CEO of Tokyo Electric (now TEPCO), Kobayashi set up Japan’s first business hotel, Daiichi Hotel in Shinbashi, Tokyo, to accommodate businessmen on trips to the capital. And he was involved in the management of Tōkyū’s railway business in its early days as well as the development of the exclusive Den’enchōfu residential district.

As a corporate executive, Kobayashi preferred to take on a wide-ranging role akin to a theater producer, rather than simply issuing orders. And he occasionally demonstrated the literary skills sharpened by fiction writing, as when he wrote, printed, and distributed 10,000 pamphlets to promote the Minō Arima Electric Railway at the moment its launch was running into trouble, dubbing it the “most promising of rail companies.” He was also known to write pamphlets to publicize the sale of land and new houses.

Kobayashi’s acumen for public relations anticipated the sort of commercial messages we see today. His masterpiece in this vein came when he opened a line to Kobe in 1920 and produced a newspaper advertisement sniping at the crowded trains of his Hanshin rivals. “Our new express trains between Kobe and Osaka are clean, fast, and nearly empty, with great views and cool carriages.” It should not be surprising that he also wrote more than 20 theatrical pieces for the Takarazuka Revue.

Kobayashi later dabbled in politics. In 1940, he became the first private citizen appointed as minister of commerce and industry when he joined the cabinet of Konoe Fumimaro. However, disagreements with future Prime Minister Kishi Nobusuke led to his resignation after less than a year. Following the end of World War II, in 1945 he was appointed minister of state and president of the War Damage Rehabilitation Board, but he was quickly purged from this position. 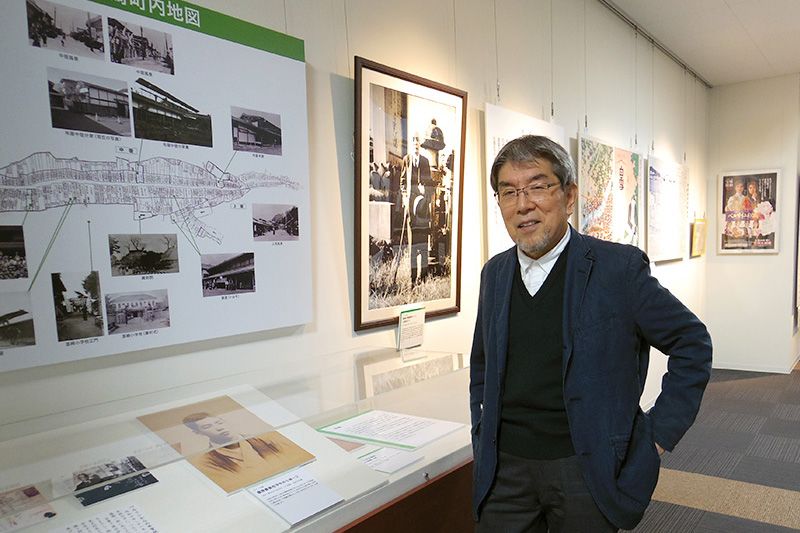 Mukōyama Tateo, an expert on the life of Kobayashi Ichizō, at a museum in Nirasaki, Yamanashi Prefecture, dedicated to famous people from the city.

Although Kobayashi’s business interests covered a broad spectrum, he was “most interested in business activities related to people’s everyday lives,” according to Mukōyama Tateo. “If there was no firm connection between his work and people’s lives he felt it had no meaning for him.”

What he loved to work on most of all was Takarazuka, a kind of theater that ordinary people could easily attend. There were expensive seats, but there were plenty of cheap seats, too—“like outfield seats in baseball or third-tier seats in sumō,” Mukōyama notes. “People could go all year round. You don’t have to be close to the action to simply enjoy a little culture. Isn’t that what finding culture in our daily lives is all about?”

(Originally written in Japanese by Nagasawa Takaaki; all photographs provided by Nagasawa unless otherwise indicated. The banner photo, courtesy of Kobe Shimbun, is a scene from the hundredth anniversary ceremony on April 5, 2014, at Takarazuka Grand Theater.)