Culture Sep 18, 2014
The story of the award-winning, globally known Nikka Whisky brand all began in a small town near Glasgow, where a doctor’s daughter met an ambitious young Japanese chemist. Nippon.com traveled to Kirkintilloch to trace the footsteps of Rita Taketsuru.

“When I was younger, I just knew that my great aunt lived in Japan,” says Harry Hogan. It was only later, he confides, that he became intrigued by his family’s remarkable history.

In the office of his family-run catering company near Glasgow in Scotland, photos are spread out across the table before us. There is also a small collection of memorabilia from Japan: books, magazines, videos, even a manga comic. They all feature his great aunt. 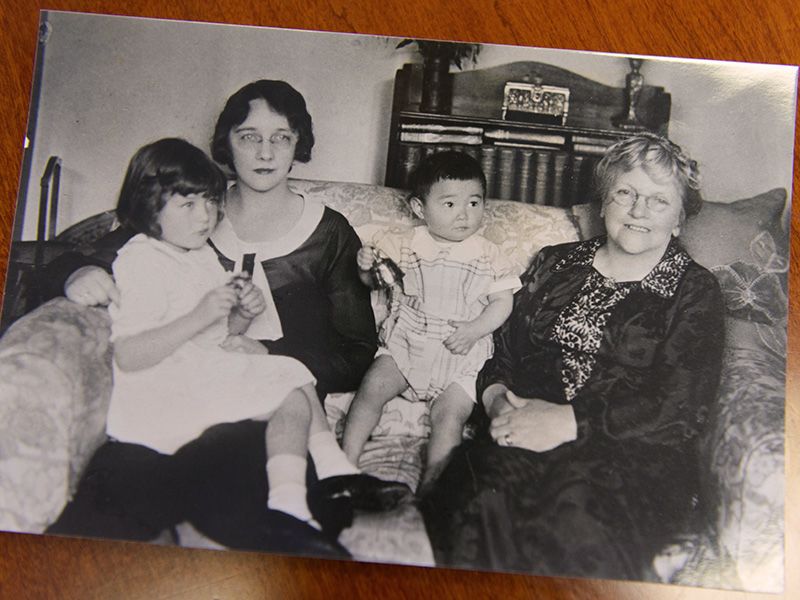 She was none other than Rita Taketsuru (née Cowan), wife of Taketsuru Masataka, the founder of Nikka whisky. For four decades she helped her husband build one of Japan’s most successful and best-known whisky distilleries.

One of the photos shows Rita on a visit to Scotland in 1931. She is sitting on a sofa with a small girl on her knee: Hogan’s mother Valerie. Hogan’s grandmother, Lucy, was Rita’s younger sister.

Sitting next to Rita is Rima, the adopted daughter she had brought back to Scotland to meet her own mother, who is also in the photo. It was the second and last time Rita would return to visit Scotland.

Jessie Roberta “Rita” Cowan was born in 1896 in the town of Kirkintilloch, near Glasgow. According to Olive Checkland’s book Japanese Whisky, Scotch Blend, the most detailed account of Rita’s life, she had a happy childhood. She was the daughter of a local doctor, and with her three siblings lived in one of the town’s finest houses. But her coming of age coincided with the later stages of World War I. 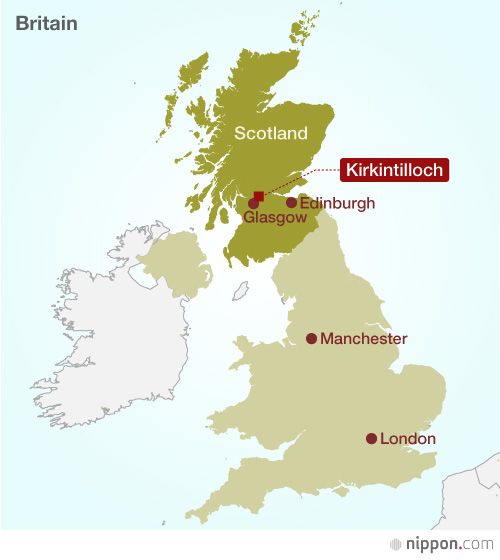 Many young men of her generation were killed in the Great War, including the man she had been engaged to marry. Then, in 1918 her father died of a heart attack, and the family quickly found itself in difficult financial straits. Checkland records that Rita’s father, Dr. Samuel Cowan, was owed £514—then a considerable sum—by 400 patients when he died. With the family breadwinner gone, Rita’s mother even considered selling the nine-bedroom home.

Taking in a lodger was an ordinary enough way to help make ends meet, and the family did just that. But there was nothing ordinary about the man who came to live with them. He was a young, fiercely ambitious Japanese chemist named Taketsuru Masataka. Rita’s younger sister Ella had met him at Glasgow University, where she was studying medicine, and invited him to the house to teach judo to their brother, Campbell.

It’s tempting to imagine reasons that the young couple became attracted to one another. Masataka may well have been lonely so far from home. Perhaps Rita felt trapped by her difficult family situation, making the handsome, exotic, and earnest Masataka appear as a ticket to an exciting new life.

They fell in love and were married in 1920, though the Taketsuru family—from a long line of wealthy and well-connected Hiroshima sake brewers—was against his unconventional choice of wife. Rita’s mother wasn’t impressed either, and when she found out about the marriage, she asked for it to be annulled. Nevertheless, the young couple left for their new life in Japan in November 1920.

Of her siblings, Rita was closest to her sister Lucy. “My grandmother was a great letter writer,” recalls Hogan. “Rita was always in contact with Lucy.” In fact, Lucy was the only member of the family to visit the Taketsurus in Japan, making the long trip in 1959, just two years before Rita’s death. 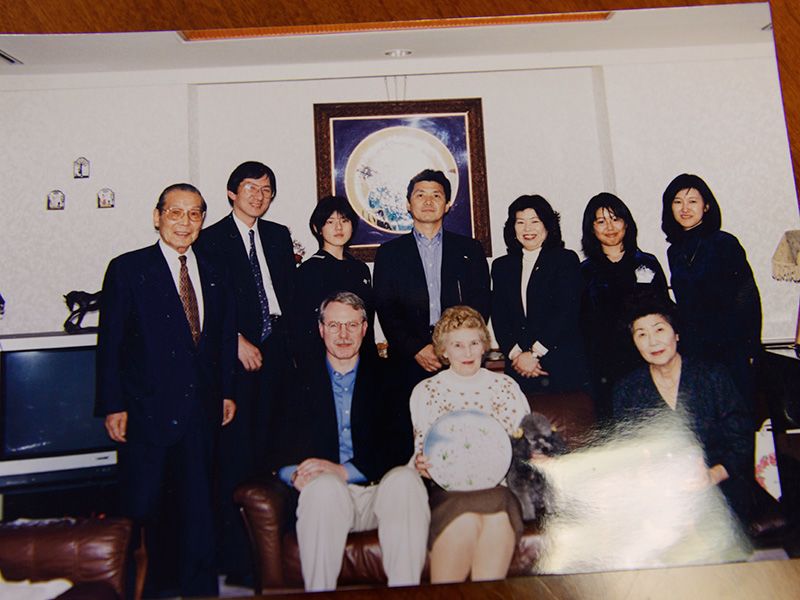 Hogan’s grandmother was also close to the Taketsurus’ adopted son Takeshi, who went on to run Nikka Whisky. Hogan remembers that Takeshi’s itinerary on his regular visits to Britain would include both the company’s London office and a trip to a distillery still owned by the company in northwest Scotland. He would visit Lucy on the way, arriving at her modest home in a limousine with a large company entourage.

Members of Hogan’s family have been in contact with Nikka Whisky and the Taketsuru family for many years. In 1998, he and his mother Valerie travelled to Japan at the invitation of the company. They visited the town of Yoichi in Hokkaidō and attended the opening of the Nikka Whisky Museum there.

Putting “Kirky” on the Map

Rita’s hometown of Kirkintilloch—better known locally as Kirky—doesn’t have too many claims to fame. Its best-known son is Thomas Muir, the eighteenth century political reformer, and until the early 1980s few in the town knew it had a famous daughter too—albeit mainly famous in Japan.

But things changed when a local council official named Bobby Coyle spotted a group of Japanese tourists outside the council’s chambers. Intrigued, because it was rare for the town to welcome Japanese travelers, Coyle enquired as to why they were there. He quickly learned they were a group of Nikka employees who had come to see the Cowan’s old family home, Middlecroft, which was at the time serving as the local council offices.

The story is recorded in a double-page feature in the local newspaper, dated March 4, 1987. The headline was: “Why the Japanese Have Such a Yen for Kirky: The Lass Who Caused a Stir in the Orient.”

So began a special relationship between the distant towns of Kirkintilloch and Yoichi that continues today. In 1988, the Strathkelvin council (which governed the district that then included Kirkintilloch) signed a twin town agreement with Yoichi, the first such agreement between Britain and Japan. To mark the occasion, a delegation from the council travelled to Yoichi. “Apparently, they were greeted by a fully-kilted pipe band,” says councilor Diane Campbell. 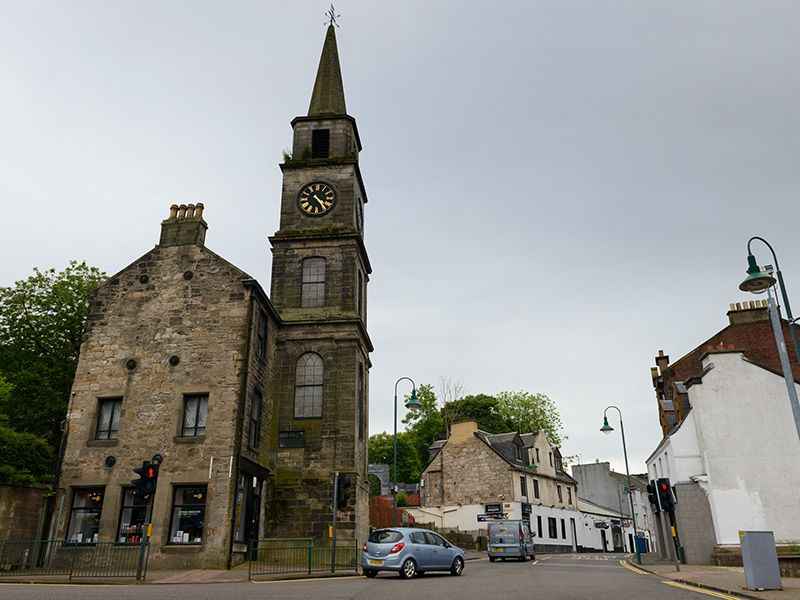 When new council offices were built in 1985, the Cowans’ elegant former home Middlecroft was demolished, despite some apparent talk of Nikka Whisky wanting to disassemble it brick-by-brick and ship it to Hokkaido. A purple-painted nightclub called Tantra now stands close to the spot.

So it is that probably Kirkintilloch’s strongest remaining physical link to Rita is a kimono and obi sash she once owned. Presented to the town in the 1980s, they are now on display in the local Auld Kirk Museum. 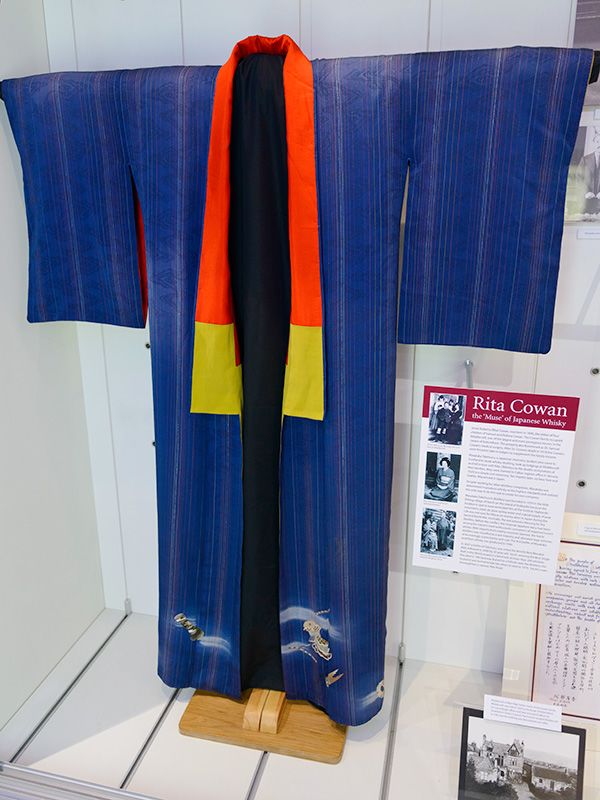 Peter McCormack, the museums development officer of the East Dunbartonshire council, says that the small display on Rita was only set up this July. With an NHK drama based on Rita’s life scheduled to begin soon, he’s hopeful the town might become a destination for some of Scotland-bound Japanese tourists. “Glasgow, Edinburgh, Kirkintilloch,” he jokes.

A kimono is, perhaps, an unusual item to find in a small Scottish museum. Many visitors are intrigued, although some take a somewhat stern view, says McCormack. “Some women see the kimono as a symbol of compliance and fitting in,” he explains, “but I see it as an interesting social artefact for the relationship of friendship between two countries.”

Certainly, locals are intrigued by the town’s unexpected link with Japan. “It’s a wee story,” he says. “People are interested in it.” Having said that said, he does note that there is an element of chagrin involved too. The story is, after all, about Scotland “giving whisky away to the world.”

“At least it was done for love rather than industrial espionage,” McCormack concludes. “It’s nice to think that it was done by a woman who was supporting her husband through thick and thin.”

NHK’s upcoming drama will focus on the many challenges that Rita had to face in a far and foreign land. “They had to bob and weave to make ends meet,” says Harry Hogan. “It was pretty tough in the early stages.”

Whisky Empire with a Century-Long Heritage 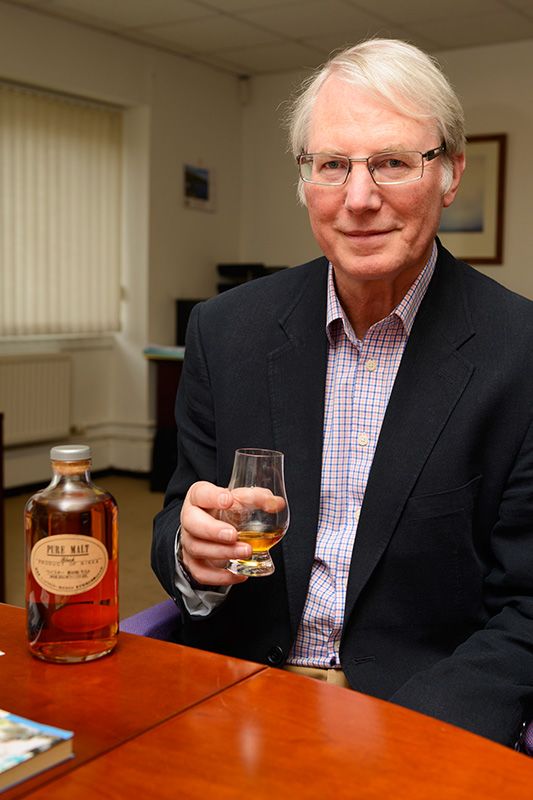 Almost a century after Rita and Masataka met, though, the fruits of their struggles are available in Glasgow’s well-stocked whisky shops and bars and around Britain. When the young Taketsuru arrived in Glasgow—probably the first Japanese person ever to study whisky making—who could have imagined that his whisky would one day be holding its own against Scotland’s best?

That success has prompted more interest in Rita of late, says Hogan. “The whisky has done it—a few articles about how the Japanese are beating the Scots at their own game.”

I’ve brought a bottle of Nikka Pure Malt Black with me to Hogan’s office. It doesn’t take long for him to find a whisky glass.

But then, to my great surprise, he tells me that he has something for me too. He opens up a cupboard in the corner of the office and takes out small red box. It’s a blended whisky and tasting glass gift set from the Nikka-owned Ben Nevis distillery set at the foot of Scotland’s highest peak. Hogan had them made as presents for clients and associates of his company.

Something catches my eye among the gold lettering on the box.

“The family whisky,” it says.