Culture Mar 9, 2015
Aizome textiles, prized by the Sengoku samurai for their hygienic benefits as well as their beautiful "Japan blue" color, are the product of a complex and time-consuming process in which human know-how and natural phenomena play equally important roles. Our correspondent traveled to Tokushima, once a thriving center of indigo dyeing, for a hands-on lesson in this living tradition.

Tokushima Prefecture, in the easternmost corner of Shikoku (the smallest of Japan’s four main islands) may seem an unlikely setting for the development of one of Japan’s most technically challenging and highly admired traditional crafts. But it was not chance that turned the Yoshino River valley into a major center of Japanese indigo dyeing, or aizome.

The aizome industry drew vital sustenance from the Yoshino River, which runs west to east through the prefecture, dividing the Shikoku highlands to the south from the Asan mountains to the north. In the days before flood control, typhoons and heavy rains caused the Yoshino to overflow its banks almost every year. The rich silt it deposited in the process provided ideal conditions for the cultivation of the plant called ai—the source of Japanese indigo—which tends to deteriorate rapidly as it depletes the soil. The area fertilized by the Yoshino River eventually grew into Japan’s foremost producer of high-quality indigo.

Ai is an annual plant of the genus persicaria that grows to about 80 centimeters in height. It blooms in the autumn, producing slender panicles of white or reddish flowers. Native to southern China and Indochina, it had already entered Japan via China by the late seventh century. In time, it brought great wealth to Awa province, as Tokushima Prefecture was formerly known. In 1889, when the Meiji government established the modern municipal system, the city of Tokushima was the tenth most populous municipality in Japan (in 2010, it ranked 86).

Today this heritage is honored at Ai no Yakata, a unique hands-on museum of indigo dyeing located in the town of Aizumi. The splendid old Japanese-style building, formerly the residence of a wealthy indigo merchant, bears witness to the prosperity Awa ai once brought to the area.

Indigo was introduced to Awa province during the Heian period (794–1185). In the Sengoku period (1467­–1568), an era dominated by military conflict among feudal warlords, demand for aizome soared; it was the fabric preferred by warriors for wear beneath their armor. The samurai valued aizome not only for its beauty but also for its antimicrobial properties, which helped prevent rashes and other problems caused by chafing and perspiration.

A pungent smell wafts up from the vats in the dyeing room at Ai no Yakata. “Japanese indigo is a living thing,” a staff member explains. “The dye itself requires nurturing.” 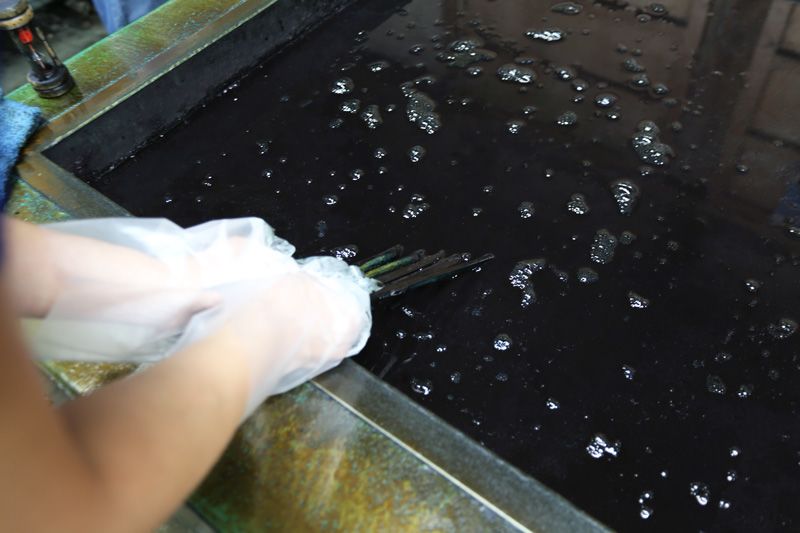 Cobalt-blue bubbles rise to the surface of the dyeing solution.

The first step involves cutting up the harvested ai leaves and allowing them to ferment. The fermented leaves are called sukumo. Lye and lime are added to the sukumo to create a liquid solution. If the sukumo, the lye, the alkalinity of the solution, and the weather are all in perfect balance, cobalt-colored bubbles called ai no hana (indigo “flowers”) will rise to the surface, signaling that the mixture can be used to dye indigo fabric.

The bacteria involved in fermentation of the leaves are essential to the distinctive blue of aizome. The action of the microbes on a compound adhering to the fabric turns the fabric blue as it oxidizes during exposure to the air. The dyeing solution must be prepared and handled with loving care to preserve and nurture the microorganisms on which the blue color depends. Sake, mizuame syrup, and other ingredients are added as needed to nourish the bacteria.

A Handkerchief to Dye For

I decide to try my hand at dyeing a handkerchief. The first step is to prepare the cloth in such a way as to create a pattern of light areas where the dye cannot penetrate, a kind of tie-dye process called shibori. Doing my best to imagine the end result, I use rubber bands to bind parts of the handkerchief around rods and sticks. Then I gently submerge the cloth in a vat of dye. After about 60 seconds, I pull it from the vat. Before my eyes the color changes from deep green to blue.

A handkerchief is prepared for shibori tie-dyeing with the aid of rubber bands, chopsticks and other objects (left). The item is dipped in the dye solution until it takes on the desired shade of indigo, and the rubber bands are removed (right).

Each time the fabric is dipped it turns a deeper shade of indigo, and each shade has its own name: kamenozoki (a very pale aqua), asagi, hanada, nando, ai, kon, and finally kachiiro (blue-black). Once the fabric reaches the desired color, the dyeing process is complete.

I remove the rubber bands and chopsticks, wash my handkerchief in cold water, and admire my handiwork. Dazzling white circles float on a translucent blue background like white morning glories blooming against a deep blue summer sky.

My finished aizome handkerchief waves in the breeze against the Tokushima sky.

(Originally written in Japanese by Yoshimoto Naoko and published on February 16, 2015. Photographs by Nakano Haruo. With thanks to Ai no Yakata, Aizumi Municipal History Museum.)