A Touch of Refinement: The Delicate Sweetness of Japan’s “Wasanbon” Sugar

Culture Mar 10, 2015
Wasanbon sugar grown in Shikoku is an essential ingredient in Japanese sweets. Its faint aroma and gentle sweetness help to give wagashi a distinctive taste. Visitors to Hattori Sugar Refinery in Tokushima Prefecture have the chance to make wasanbon sweets by hand.

Ever since traditional Japanese cuisine, or washoku, was added to the UNESCO list of the world’s “intangible cultural heritage” in 2013, there has been increased interest in the Japan’s confectionaries, known collectively as wagashi. These distinctly Japanese sweets, which go well with green tea, have been popular since the Edo period (1603–1868), not for only their taste but also their attractive appearance.

Wasanbon sugar has played a big part in the development of wagashi and has long been cultivated in the prefectures of Tokushima and Kagawa in eastern Shikoku. During the Edo period, when today’s commonly used white sugar was not widely available, wasanbon’s restrained sweetness and faint aroma gave wagashi its delicate flavor. The pale gold grains are fine and melt in the mouth.

The sanbon part of the name, which literally means “three trays,” refers to the three stages of hand-kneading with water on trays during the customary refining process that gives the sugar its high quality. As in wagashi, the wa part means Japan. Incidentally, before wasanbon came into use, the sweetest food in Japan is said to have been persimmon. 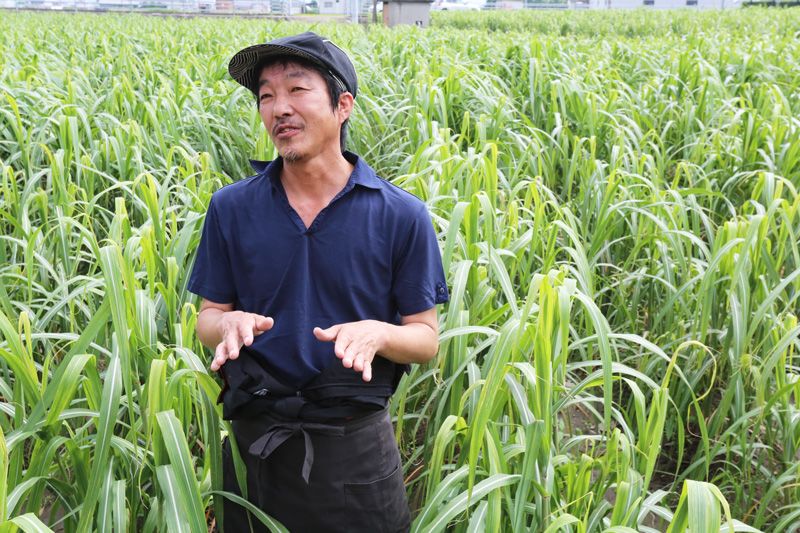 A Tokushima resident brought the chikutō cane from which wasanbon is made from Miyazaki Prefecture in Kyūshū to Shikoku more than two centuries ago. The sugar became a local specialty, but after the end of World War II imports of cheap refined sugar began. The limited area available for cultivation and complex refining process required made it difficult for wasanbon makers to compete, and production rapidly decreased as a result. Even so, wagashi still relies on domestic sugar, and traditional refining techniques for wasanbon continue to be used today.

Sugar varieties from Tokushima and Kagawa prefectures are called Awa wasanbon and Sanuki wasanbon, respectively, after the names of historical provinces in these areas. These two types of sugar are a valuable local resource and essential to the manufacture of such Japanese sweets as the upscale dry sweets rakugan. Almost all of the sugar produced is supplied to famous and long-established wagashi stores.

I visited the Hattori Sugar Refinery in Awa, Tokushima Prefecture, which still uses traditional methods for every stage of the production process, from cultivation of sugar cane to the processing of wasanbon. In front of the refinery are extensive chikutō sugar cane fields where the plant is grown organically and harvested by hand. Cultivation lasts from spring to autumn, while refining takes place within the facility in winter.

The flavor of wasanbon is best appreciated in dry sweets made by simply pressing the sugar in a mold. Dry sweets sold commercially include other ingredients to bind the sugar and prevent disintegration during transit, so it is only possible to enjoy sweets made purely from wasanbon by making them yourself. I tried my hand at making my own 100% wasanbon sweets at the refinery, alongside a family from Hiroshima who wanted their children to experience traditional Japanese culture. 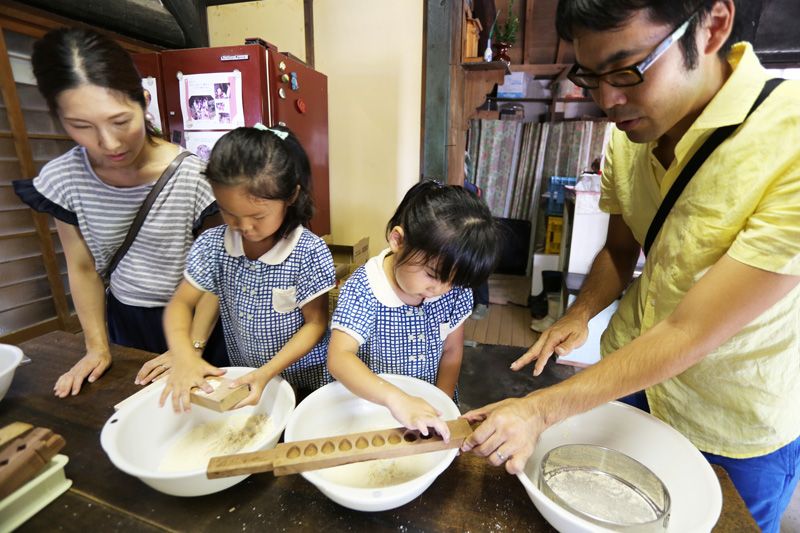 To make the sweets, we first added wasanbon to a bowl; its soft dryness was pleasant to the touch. We sprayed on water with an atomizer to make the sugar cluster together. This was followed by stirring to ensure that the water evenly coated all the grains and sifting to separate the moistened grains once again.

The next stage was to shape the sugar using a wooden mold. The carefully carved hollows of the mold can conjure up another world.

We put the wasanbon into the mold and pressed it down with our fingers and palms. It was like playing with modeling clay, and the children excitedly pushed the sugar into the molds with their tiny hands. After much exertion, it was time to remove the sweets by tapping on the wooden mold and then turning it over, slowly and carefully. The sweets that emerged were finely patterned, simple, and elegant.

Add water and the sugar sticks together (left); the sweets coming out of the mold (right).

When I placed the finished sweet on my tongue and breathed through my nose I could smell the mild aroma of wasanbon sugar. As the confection slowly melted, its gentle sweetness gradually spread through my mouth. Somewhere at the back of my mind I could see the fresh green cane of the chikutō field swaying in the wind.

(Originally written in Japanese by Yoshimoto Naoko and published on February 18, 2015. Photographs by Nakano Haruo. With thanks to Hattori Sugar Refinery.)