Culture Lifestyle May 10, 2016
Amid the soaring peaks of southern Nagano Prefecture, a solitary hamlet clings to a mountaintop, seemingly suspended in both space and time. We visited Shimoguri-no-sato, where crops grow abundantly on steep slopes 1,000 meters above sea level, and the villagers continue to observe the ancient harvest rite that served as inspiration for Miyazaki Hayao’s Spirited Away. 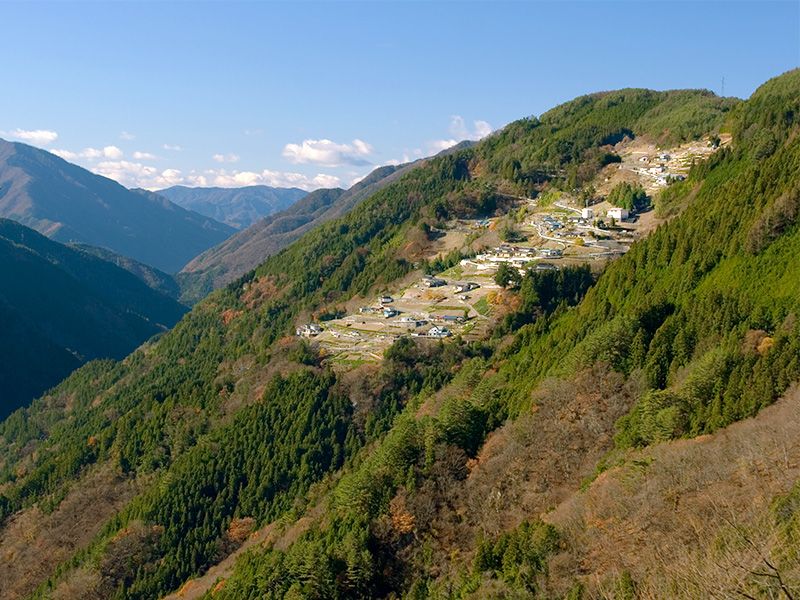 A kilometer above sea level, the small hamlet of Shimoguri-no-sato clings to a mountaintop in the Tōyama-gō area of southern Nagano Prefecture. How, one wonders, did a settlement grow up in such an inaccessible location? The answer lies in an abundance of nature’s most basic resources: sun and water. Shimoguri-no-sato, where the sun is said to rise at one’s feet, is one of the few spots in this alpine region that enjoys a full day of sunlight. Thanks to its long daylight hours, it offers an ideal growing environment for potatoes, buckwheat, and other vegetables. Clear mountain water flows in profusion through the village’s supply channels, and the residents use it for everything from washing their home-grown vegetables to brewing tea from home-grown tea leaves. 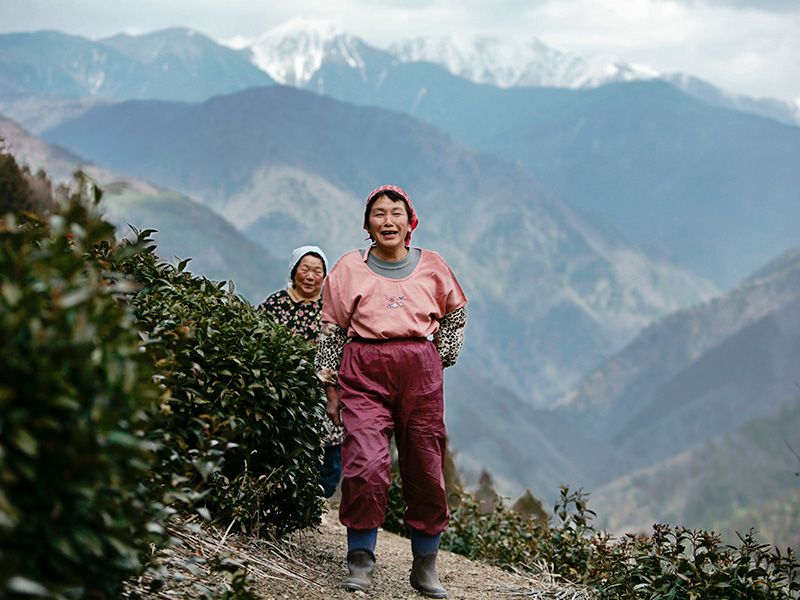 Cheerfully defying gravity, Kurumizawa Mieko (right) harvests tea with the brisk assurance of someone who has lived most of her life on the side of a mountain.

In ancient times, when no one worried about transportation to the nearest city, Shimoguri-no-sato must have seemed like an earthly paradise to inhabitants of the area. In fact, people first settled the site thousands of years ago, as attested by the presence of stone age tools dating back to the Jōmon period.

Nowadays, one might think twice before choosing such a spot to live in. The village has no shops and no regular bus service. Visitors must either drive themselves up the steep slope or take a taxi from the bus station in the small town of Kamimachi at the foot of the mountain. Not surprisingly, perhaps, the hamlet’s population continues to decline. In the last eight years alone, the number of households has fallen from 53 to 48 and the number of residents from 117 to 93. Houses stand empty and abandoned. Many believe that the village’s days are numbered.

A Different Kind of Affluence

With its steep slopes, the land here does not lend itself to rice cultivation. For generations, the main crop here has been a small potato known as nido imo—literally, “twice potatoes.” In most of Japan, potatoes must be rotated with other crops if they are to thrive. Here, in an environment reminiscent of their ancestral home in the Andes, these small tubers can be planted and harvested twice from the same field, once in early summer and once in autumn.

“The potatoes here are small, but they’re sweet and delicious,” says Kurumizawa Mieko, who came here as a bride from a neighboring village decades ago. “A traditional favorite of ours is potato dengaku. You put three or four on a skewer and roast them over an open fire, glazing them with homemade egoma (perilla) or walnut miso sauce.”

Kurumizawa makes her own miso and tofu from soybeans harvested in the fall, steams sweet dumplings made from local buckwheat flour, and picks seri (water dropwort) from the crystal-clear water that runs through the village. Her cooking embodies a living tradition of healthful and delicious “farm to table” cuisine. 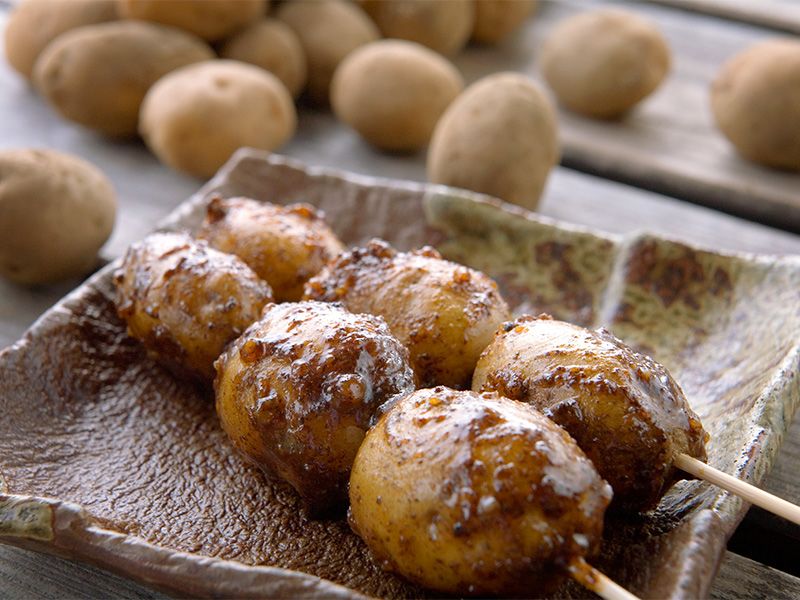 Miso-glazed dengaku made from local potatoes is among the specialties one can sample at Hanbatei, the village’s sole eating establishment. The restaurant was built on the site of the community’s elementary school after it was closed in 1986.

Visitors can sample such local specialties at the village’s one and only eating establishment, Hanbatei, where the women of Shimoguri-no-sato take turns cooking and waiting on customers. Kurumizawa works here as well.

Although Kurumizawa works hard, she considers life in Shimoguri-no-sato “carefree,” because “however little money one may have, there’s always plenty to eat. The air is fresh and clean, there’s lots of sun, and most crops flourish. I don’t feel that life here is inconvenient at all.”

In addition to “twice potatoes,” the residents of Shimoguri-no-sato typically manage to fit buckwheat into their planting and harvesting schedule. From the end of August until the middle of September, a profusion of white buckwheat flowers adorn the village’s sloping fields, lending the landscape an almost celestial beauty.

Each December, the communities of Tōyama-gō participate in a unique religious ceremony, the Shimotsuki Festival. Once a year, they ask all the gods of Japan to gather, celebrate, and heed the residents’ prayers. As night falls, they boil water in a cauldron as an offering. In the company of masked figures, viewed as incarnations of the gods, villagers dance and leap about the cauldron while drinking sake, accompanied by the sound of the taiko drum and Japanese flute. As the night progresses, the celebration grows more and more raucous, with villagers, tourists, and “gods” all joining in the revelry; the festivities continue until the crack of dawn. It is a ceremony that has continued virtually unaltered for centuries. 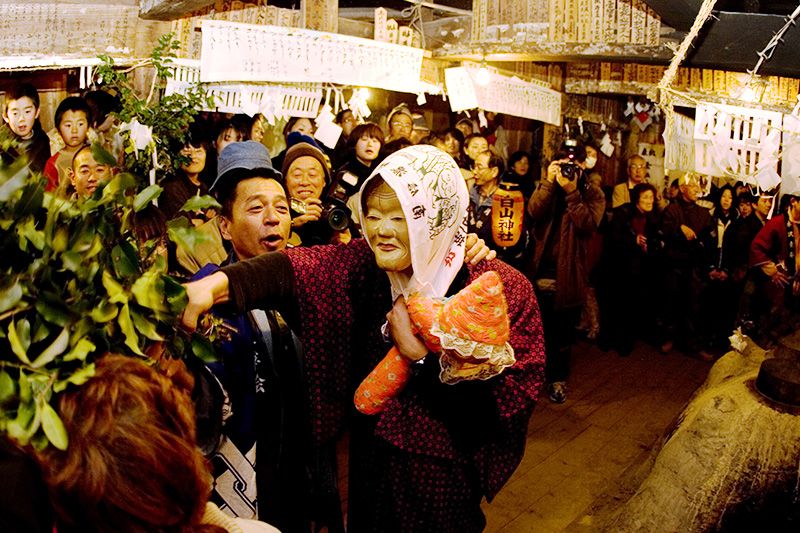 At the Shimotsuki Festival, villagers and others celebrate throughout the night in the company of masked figures representing the gods and ancestral spirits. As the night progresses, more and more “divinities” join in the festivities. 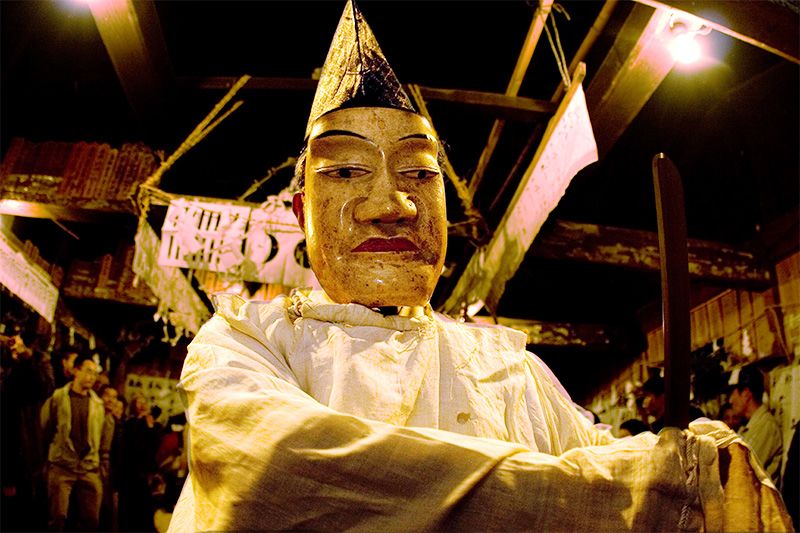 The austere-looking mask in the foreground represents Hassha, the ancestral spirit of an aristocratic family said to have inhabited the Tōyama Valley until the line died out early in the Edo period (1603–1868).

Held at a time of year when the days grow short and nature’s life forces seem to be in retreat, the Shimotsuki Festival is a ceremony of rebirth. As the year draws to a close, the gods cleanse themselves with hot water so as to greet the new year purified in spirit and born anew. The festival is thought to have been the inspiration for Miyazaki Hayao’s anime hit Spirited Away.

For centuries, Shimoguri-no-sato has preserved this and other ancient traditions intact. Suspended in space and time, it is one of Japan’s hidden gems, rewarding the intrepid traveler with scenic splendor and a taste of unspoiled provincial life.