Culture Jan 4, 2017
Before Shintō came to be practiced in constructed shrines, it was centered on the direct worship of nature itself. Toya Manabu surveys the various objects of worship that formed the original focus of Shintō belief.

Shintō today is inextricably associated with the many Shintō shrines scattered throughout Japan. These structures span a variety of architectural styles, some with their roots in ancient domestic architecture, others more clearly influenced by sacred Buddhist architecture imported from the Asian continent from the sixth century on. The taisha-zukuri of Izumo Taisha Shrine and the shinmei-zukuri found at Ise Shrine are considered the earliest styles, traceable back some 1,500 years. Yet the origins of Shintō, Japan’s indigenous religion, predate the construction of such shrines by centuries or even millennia.

Shintō as it was practiced in the remote past, before the advent of shrine Shintō, is referred to as Koshintō (old Shintō). The essence of Koshintō is nature worship. It is an animistic religion that regards every element of nature as divine. Mountains, seas, and rivers are all kami (divine spirits or gods), as are the sun, the moon, and the North Star. The wind and thunder are kami. Even the seasons and time itself are regarded as divinities. In short, Koshintō holds that nothing in this world or this cosmos is devoid of divine energy; the kami are present everywhere.

Koshintō focused on four objects of worship: kannabi, iwakura, himorogi, and hi. These constitute the original, archetypal focus of Shintō belief and practice.

Kannabi are exceptionally majestic or beautiful mountains that are treated as sacred and worshipped as kami in their own right. Mountains have played a prominent role in Japanese religion since prehistoric times. Towering mountains were regarded as hostile, dangerous places for human beings to venture. At the same time, they were venerated as the source of the life-giving streams and rivers that nourished the farms and villages below—or could deluge them when their banks overflowed. Soaring into the heavens and often wreathed in clouds, such mountains were viewed as a world apart and treated with awe and reverence. Mount Fuji, Hakusan, and Tateyama are the best-known examples of kannabi. (In the era of shrine Shintō, these mountains became associated with the Sengen, Shirayama, and Oyama shrines, respectively.) . 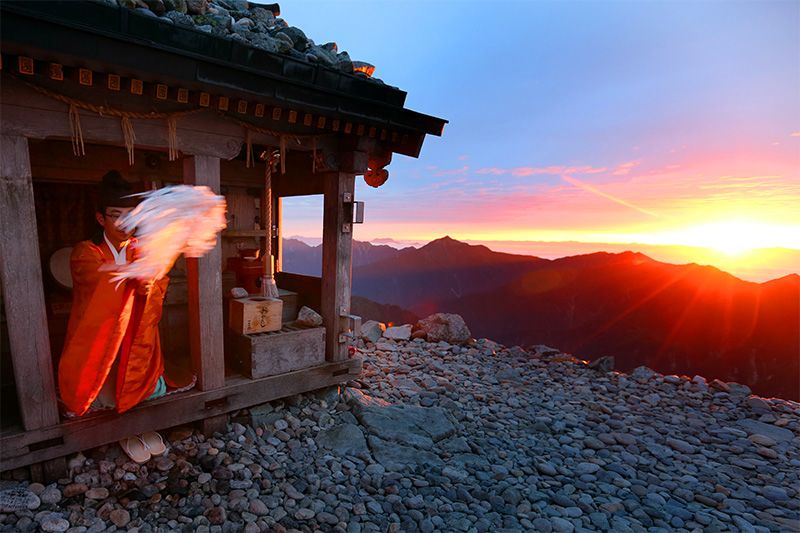 Oyama Shrine (Tateyama, Toyama Prefecture) sits atop one of the peaks of Tateyama, the sacred mountain to which the shrine dedicated.

Iwakura are striking or imposing rock formations that are worshipped as yorishiro—not kami per se but places or objects that attract divine spirits. Examples are Gotobiki-iwa in Wakayama Prefecture (Kamikura Shrine), Mitsuishi in Iwate Prefecture (Mitsuishi Shrine), and Iwakura in Mie Prefecture (Hana-no-iwaya Shrine). 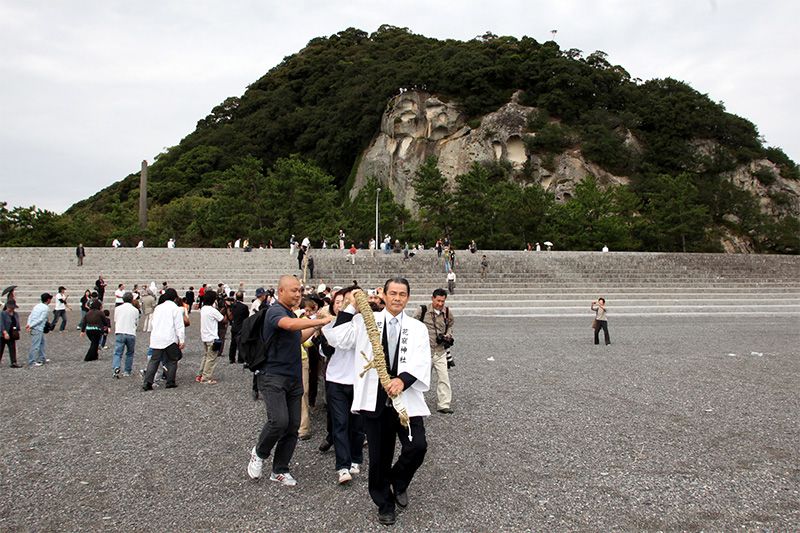 Hana-no-iwaya Shrine in Mie Prefecture, one of the oldest shrines in Japan, is dedicated to the huge rocky outcropping in the background, regarded as a dwelling place of the kami. 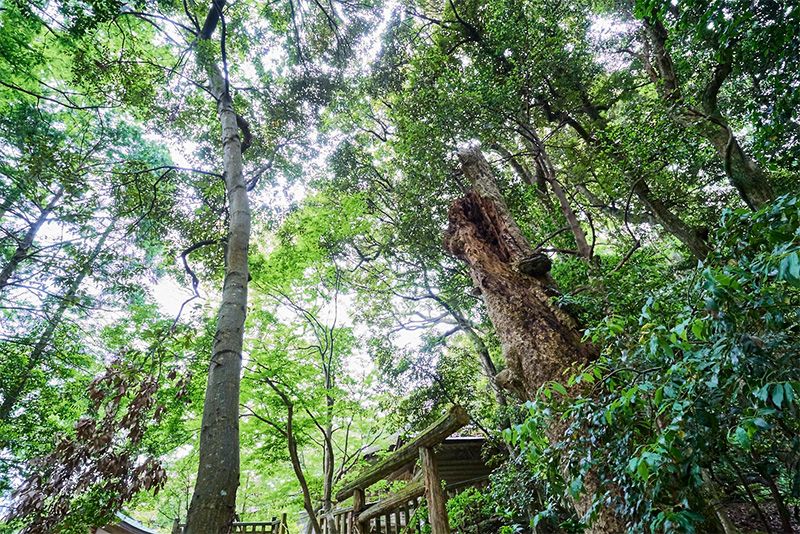 The forest at Keta Shrine (Hakui, Ishikawa Prefecture) is worshiped as a himorogi and it is forbidden to enter. Photograph courtesy of Keta Shrine.

Hi falls into a somewhat different category from the previous three objects of worship. Written variously with the kanji for spirit (霊), sun (日), or fire (火), it conveys the very essence of the sacred and nonmaterial, as in the Shintō term musuhi (or musubi), sometimes translated as “motive force” or “life force.”

The Shintō that we know today can be traced directly to this worship of kannabi, iwakura, himorogi, and hi—the indigenous faith of the Japanese hunter-gatherers of the Jōmon era. Buddhism, with its elaborate temples and sacred images, was completely alien to the Japanese until it was imported from the Korean Peninsula in the sixth century. Not coincidentally, Shintō shrines also began springing up in the sixth century. But the sites of these shrines were the same sacred mountains, forests, and rock formations where the Japanese had worshipped for centuries.

Most shrines we know today, including those of Ise and Izumo, are built around a sanctuary known as the honden. The honden houses the shintai, or “divine body,” a treasure of some sort in which the spirit of the kami is believed to reside. But the notion of an artifact as a yorishiro was foreign to the nature worship of early Shintō. At the most primitive type of shrine, the object of worship is the mountain itself; accordingly, we find a haiden, or worship hall, but no honden. Examples are Ōmiwa Shrine (Nara Prefecture), Suwa Taisha (Nagano Prefecture), and Kanasana Shrine (Saitama Prefecture). Originally, all Shintō shrines were doubtless of this type. Only later, when the practice of enshrining artifacts as shintai took hold, did it become common to build separate sanctuaries in which to preserve them.

(Originally published in Japanese on November 7, 2016. Banner photo: The sun rises alongside Mount Fuji as viewed from Futamigaura in Ise, Mie Prefecture, around the time of the summer solstice. The light of dawn shining between the two sacred rocks at this spot has been worshipped since ancient times as hi, a divine energy.)