Culture Sep 4, 2017
Japan’s far-flung islands are home to an impressive number of kyoju, or old-growth trees. Like the famed Jōmon Sugi on Yakushima, these sentinels of the forest have flourished in the warm climate and fresh ocean air, spreading root and limb over centuries to become burly giants. Below we visit three of these ancient titans.

Japan’s diffuse population of old-growth trees, or kyoju, includes numerous awe-inspiring specimens found on far-off islands. Fans of these woodland sentries board ferries and planes bound for such remote locales as Oki in Shimane Prefecture and Mikurajima in the Izu Islands to commune with these giants of the forest. Kyoju are also sources of local pride and many remote communities have turned to these venerable inhabitants to lure visitors.

The best-known and most iconic old-growth tree in Japan is without question the Jōmon Sugi, a magnificent cryptomeria on Yakushima, a UNESCO World Heritage site in Kagoshima Prefecture. First discovered deep within the island’s thick, virgin forest in 1966, the knotty Japanese cedar attracts travelers from around the globe.

Distant islands like Tsushima in the Korea Strait and those in the Gotō group far off the coast of Nagasaki Prefecture also boast magnificent specimens of kyoju, testament to the islands’ importance as stop offs in the influx of ichō (Ginkgo) and other species from mainland Asia. Likewise, the far-flung islets of the Seto Inland Sea are home to a host of old-growth trees that provide a moving contrast to the urban sprawl of the surrounding coastline. Below we traverse the seas around Japan to visit three kyoju in their isle homes. 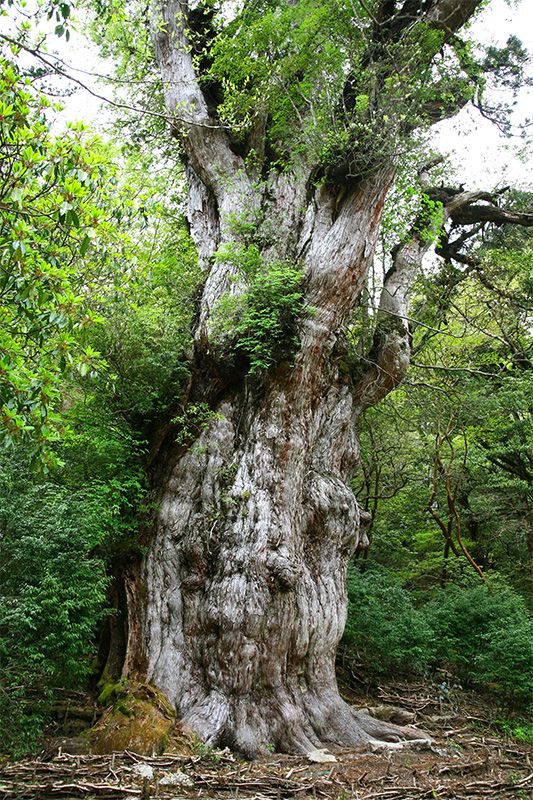 This aged sugi, or Japanese cedar, is considered an archetype kyoju, setting the bar by which other hoary specimens are judged. Despite its lofty status, though, it joined the ranks of Japanese old-growth trees relatively recently, having only been discovered in the 1960s. However, Yakushima gaining World Heritage status in 1993 brought the tree broad attention and presently there is no end to the hordes of nature lovers from Japan and abroad who brave the steep forest trails to admire its splendid form.

Specimens of old-growth Japanese cedar are by no means rare, though most over their long lives have conjoined with neighbors or sprouts from the same plant to form giant conglomerate kyoju. While spectacular in their own way, the appeal of these trees are very different to the solitary beauty of the Jōmon Sugi, which has remained a single, massive tree.

The plant’s low, robust bole, typical of specimens in typhoon-prone regions, is the antithesis of its lengthy sugi cousins cultivated for lumber. In fact, it is likely its squat, uneven appearance and wildly jutting limbs made it unsuitable for timber. Spared the woodcutter’s axe, it has been allowed over the centuries to grow unencumbered.

The Jōmon Sugi is undoubtedly ancient, but its exact age is still subject to debate. Early estimates put it at 7,200 years, but later radio carbon testing knocked this back to 2,170 years. Complicating efforts, the center of the plant has long rotted away, making it difficult to determine its age with conventional methods. While experts go back and forth on the issue, evidence indicates 2,000 years, give or take a few centuries, to be a reliable figure.

When I first visited the Jōmon Sugi nearly 30 years ago few people made the demanding trek through the dense forest of Yakushima. At that time, it was still possible to stand under the tree’s outstretched branches and touch its rough surface. With fame, though, came a flood of admirers. In the succeeding years, portions of the surrounding woods were thinned to accommodate the uptick in tourists, leading to erosion. The increase in foot traffic also compacted the soil around the tree’s roots, weakening the plant. To ameliorate these ill effects, a movement began where visitors would carry a handful of sand to sprinkle at the base of the tree. By 1996, though, it had become necessary to restrict people to an observation deck built 10 meters back from the tree.

Although it is no longer possible to get right next to the tree, it is still worth the 10-hour, round-trip hike to see the Jōmon Sugi. Its grandeur is even more moving when pondering the immense time span it has kept watch over the surrounding forest. 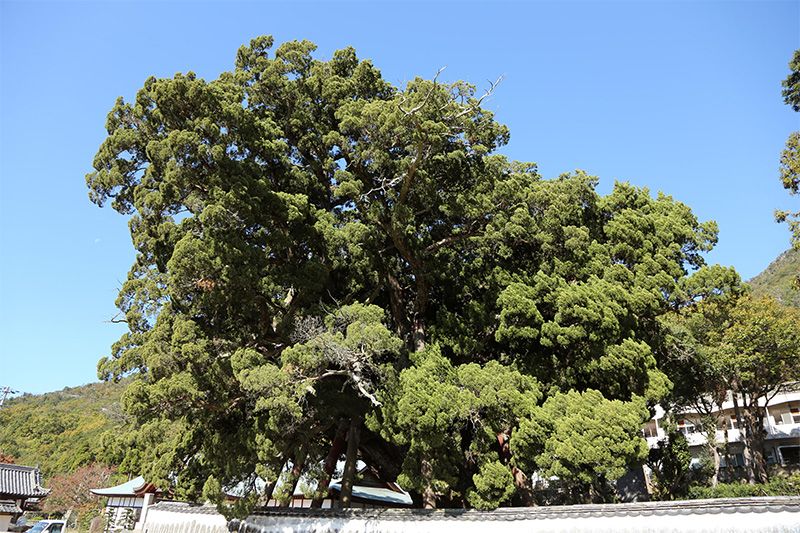 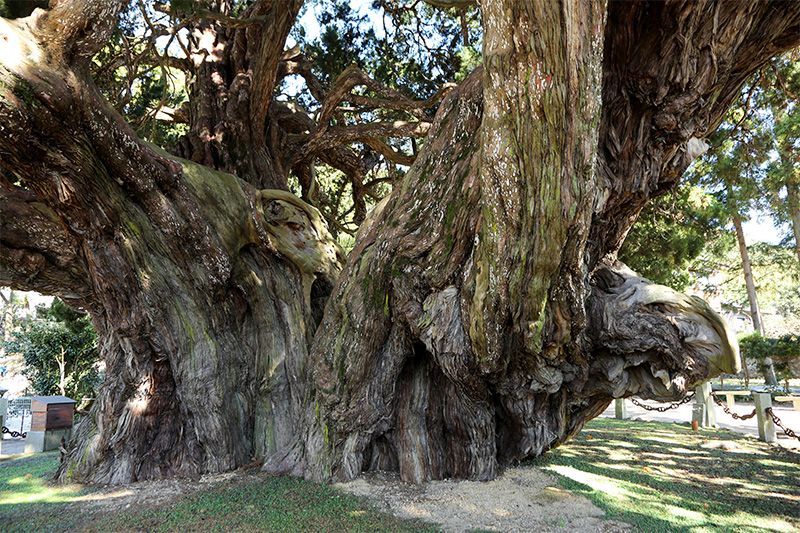 The next tree takes us to Shōdoshima, the second largest island in the Seto Inland Sea. The picturesque islet, home to some 30,000 residents, is famed for its sprawling olive orchards and has featured as a setting in both film and literature. Shōdoshima has also become a regular destination for old-growth fans who come to admire the island’s giant Chinese juniper. The venerable plant, the largest of its kind in Japan, sits within the confines of the Buddhist temple Hōshōin, a short distance from the center of the sleepy port town of Tonoshō.

According to legend, Emperor Ōjin planted the the tree around 1,600 years ago. The imposing juniper, known in Japanese as a byakushin or shinpaku, has three massive trunks that splay outward, twisting and arching in opposing directions. In 2015, a tree surgeon examining the tree determined that these gargantuan appendages either sprouted from the same root system of the parent tree or cataclysmically split from a single bole some time in the distant past.

The unusual shape of the tree has thwarted conventional methods for determining its actual girth, but measurements at the base have yielded an impressive 17.3-meter circumference. Time is not always friendly to junipers, though, and many old-growth specimens suffer bleached trunks and substantial decline in vigor. By contrast, however, the shinpaku at Hōshōin remains robust and healthy. In fact, it appears to be adding to its sprawling crown, which is likely already the broadest of any conifer in Japan.

Visitors gazing at the tree are often amused to find animal shapes such as turtles, monkey, dragons, and tigers hiding among the nooks and crannies of the tree’s uneven surface. Talented searchers are even said to be able to spot scores of beasts. If I had to choose three of Japan’s grandest kyoju, I would certainly include the Hōshōin juniper on that list. 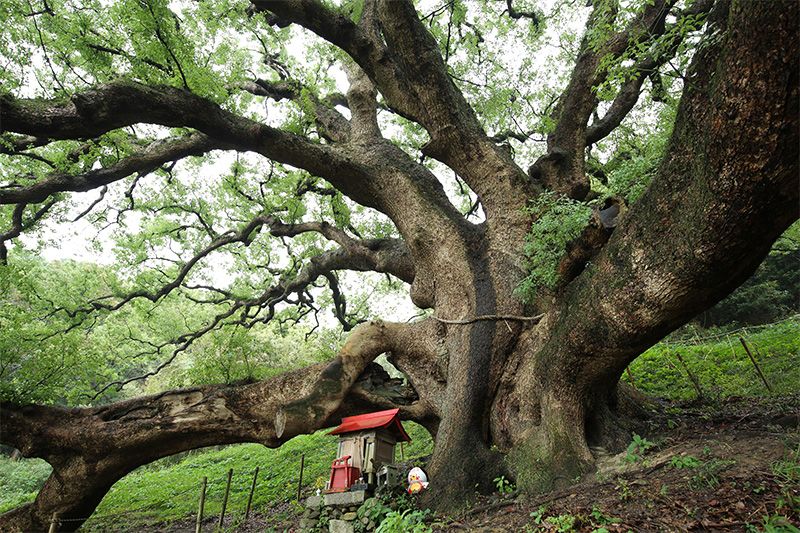 Shishijima is little more than a dot in the Seto Inland Sea, but it boasts a colossal symbol in the form of a grand kusunoki, or camphor. The quiet islet was once home to 1,000 inhabitants who carved out a living from the surrounding sea. But in the years following Japan’s period of high-speed economic growth the remote community steadily declined until now only a handful of people remain. Consequently, visitors may be surprised by the pervading hushed atmosphere. However, thanks to the numerous information signs they will have no difficulty finding the massive camphor. It stands just a short walk from the main village on a steep hill overlooking the surrounding sea. Visitors will be moved by the curious spectacle of the tree’s robust branches reaching outward in seeming welcome.

The plant has an unusual shape, with its limbs appearing to emanate from the roots instead of the trunk. There are several theories as to why this is, the most plausible being that an ancient landslide covered the bottom five meters of the tree. I have no doubt it was an impressive kyoju prior to the calamity, and my only wish is to have been able to see it in all its full glory.

But the rustic atmosphere makes it easy to imagine what it once looked like. A group of around 30 volunteers help tend the tree and keep the area in a pristine state, and surrounded by the Inland Sea’s timeless beauty, the mind naturally removes the layers of time to see the kusunoki as it was in eras past. Lost in such thoughts, visitors may find their musings interrupted only by the departure of the ferry.

(Originally published in Japanese on August 22, 2016. Photos and text by Takahashi Hiroshi.)

Deepening Summer: Ancient Trees in the Season of Heat Mount Fuji: Where the Spirits Dwell (Photos) Life and Rituals in the Yaeyama Islands (Photos)