Culture Mar 28, 2017
In the central Fukushima town of Miharu stands the 1,000-year-old Takizakura, or “waterfall cherry,” whose drooping branches seem to send rivers of pink blossoms flowing toward the ground each spring. The largest shidarezakura (weeping cherry) in the country is considered one of the “three great cherry trees” of Japan. 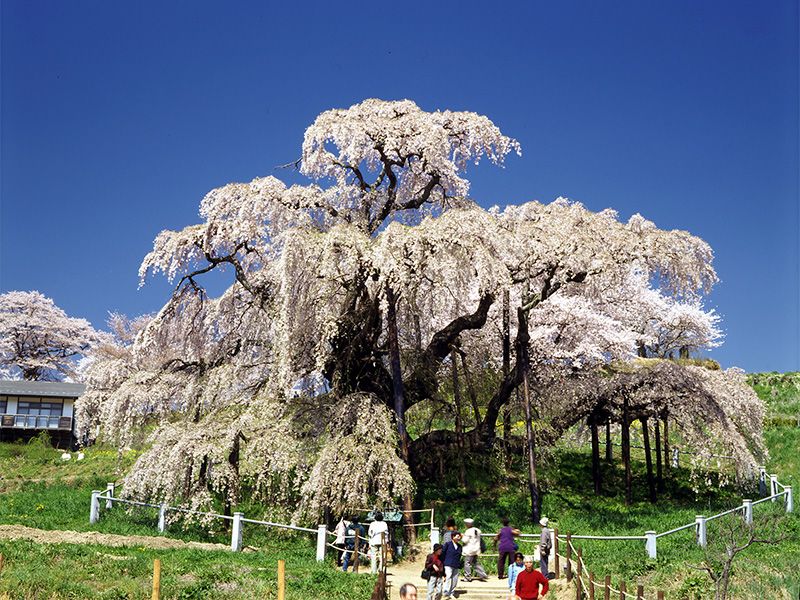 Come spring, the small town of Miharu in central Fukushima Prefecture puts on a spectacular flowering display as plum, peach, and cherry blossoms burst into bloom all at once—the town’s name, which means “three springs,” is said to derive from this trio of blossoms. Standing out amid this flurry of flowers is the millennium-old Takizakura, which together with the Usuzumizakura in Gifu Prefecture and Jindaizakura in Yamanashi Prefecture make up the “three great cherry trees” of Japan.

True to its title as the largest specimen of shidarezakura, or weeping cherry tree, in Japan, the Takizakura—literally “waterfall cherry”—features broad branches and light pink blossoms that appear to flow earthward. This particularly beautiful feature has along with its age made the tree legendary among sakura lovers, and each year in mid-April more than 200,000 people come to enjoy the blossoms. The tree is spectacular during the daytime hours, but those who make the trek to see the Takizakura lit up at night are treated to a different, dreamlike vision.

The Takizakura sits in what is known as sakura hollow, an area that affords shelter from strong winds while providing excellent drainage, abundant sunshine, and nutrients from surrounding fields. The tree is ringed by a footpath allowing visitors to enjoy the blooms from every angle. However, the general consensus is that the uphill view of the elegantly flowing branches of the sakura is the best.

The ancient tree has weathered tribulations during its lifetime, most recently losing several limbs during a typhoon in 2002 and a snowstorm in 2005. Fortunately, the damage was not extensive enough to permanently mar the breathtaking beauty of the Takizakura.

Visitors to Miharu can also enjoy the town’s 10,000 other cherry trees, 2,000 of which are shidarezakura said to be descendents of the Takizakura. Miharu’s numerous weeping cherries are in fact its second biggest claim to fame, earning it in 1990 the title of one of Japan’s 100 most famous hanami spots. Despite abundant opportunites for blossom viewing, though, many tours only make a stop at the Takizakura, a regretable situation considering the profusion of blossoms that blanket the town each spring.