Culture Mar 29, 2017
Standing alone in a field in northern Chiba Prefecture, this magnificent yamazakura (mountain cherry) tempts photographers and flower-viewers, who try each year to pinpoint when its difficult-to-predict blossoms will cover its dome-shaped crown. 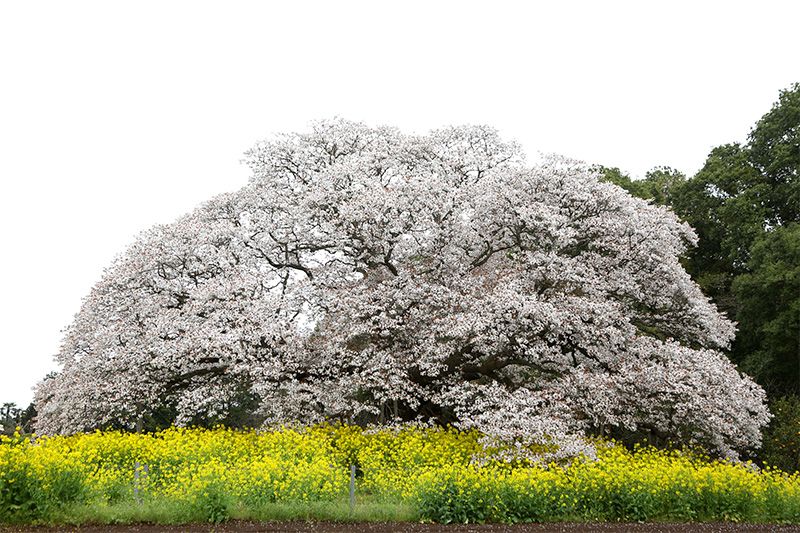 Leading the list of Japan’s biggest cherry trees is the edohigan variety, a hardy, long-living breed that is famed for blossoming around the vernal equinox. True aficionados of ancient sakura, though, will certainly rank the Yoshitaka cherry—a specimen of the yamazakura, or mountain cherry, variety—among the aged kings of spring.

This relatively young tree, at around 300 years of age, is located in the Hokusō area in northwestern Chiba Prefecture. It can be expected to flower for centuries more to come, as the upper age limit for yamazakura is around 1,000 years.

The yamazakura are notoriously difficult to predict, although they often blooming close to a week later than the more common somei-yoshino variety. The leaves and blossoms of mountain cherries appear nearly at the same time, whereas with many other breeds, flowers precede foliage. This means that they appear in their full pink glory for just a handful of days before foliage appears. This brevity has earned the plants the moniker of “miracle” cherries, for it can be rare to see them in peak bloom. For this reason it is not unusual during hanami season to see hordes of photographers making daily trips to check the progress of the flowers.

The Yoshitaka sakura sits alone in a field with robust, broad-reaching limbs extending from multiple trunk sections, forming a nearly perfect half-sphere crown. When the tree is in bloom, it presents the image of a flower-laden hillock. The plant’s isolation likely contributed to its rounded shape by enabling it to stretch sunward in all directions, unimpeded by competitors. When in bloom, the tree’s curved pink form combines with its abundance of richly colored blossoms to create a distinct and deeply beautiful scene vividly different from somei-yoshino.

The Yoshitaka sakura is stunning from any viewpoint, a condition that is enhanced by the surrounding field of vibrant yellow canola flowers. The surrounding environment of the tree is carefully tended, and visitors can enjoy hanami while strolling along an earthen path that circles the plant. While a newcomer where ancient cherries are concerned, the yamazakura of Yoshitaka will be certain to please blossom fans for generations to come.