Spring Immemorial: Ancient Trees in a New Season of Green

Culture May 4, 2017
As the pale pink hues of cherry blossom season pass, spring deepens as wooded areas come alive with newly sprouted foliage. In a timeless ritual, ancient kyoju—Japan’s venerable old-growth trees—return to life, adorning their aged limbs in youthful coats of leaves. Standing beneath these giants, one is filled with eagerness for the coming days and months.

As we bid farewell to the beloved sakura (cherry blossoms), we next turn our eyes to shinryoku, the fresh, verdant foliage that marks the next stage in spring’s progress. Many look forward to the changing spectacle of woodland giants like the shiinoki, or Japanese chinquapin, and the kusunoki, or camphor laurel.

But these trees are evergreens, whose fresh leaves sprout about a month after the truly breathtaking show begins—the leafing-out of the ginkgoes, keyaki (zelkovas), and other deciduous trees in Japan’s mixed-growth woodlands. As the first winds of spring blow through their branches, these kyoju, or old-growth trees, burst out with rich crowns of green, signaling that the chill of winter is behind us and the season of growth and renewal is at hand. We can only marvel at the stark change from the lifeless hues of winter to the splendid colors of spring, sensing the enduring vitality of these wooded giants.

Below I present several kyoju in their full spring splendor. The lush tapestry of these giants has inspired poets for hundreds of years. 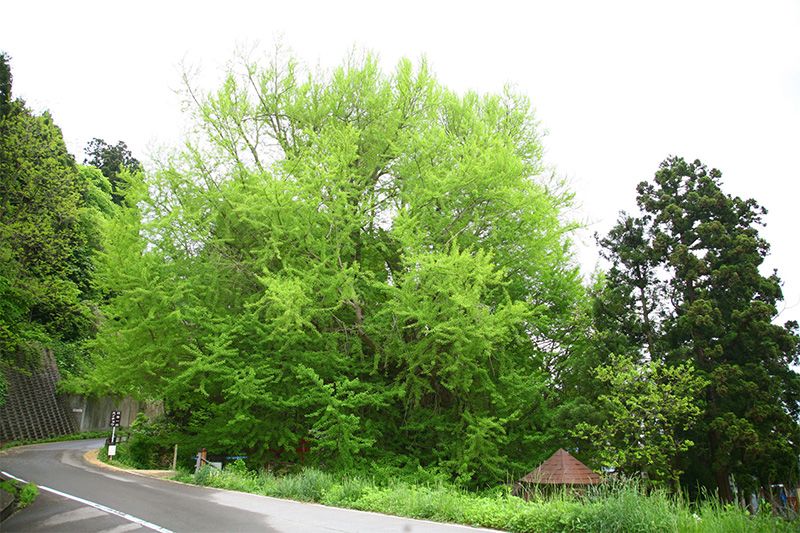 As a species the ichō, or ginkgo, is thought to have made its way from mainland Asia to Japan upwards of eight centuries ago. Tsushima, a remote island situated in the Tsushima Strait that is part of Nagasaki Prefecture, was a transit point on this prolonged migration and boasts Japan’s oldest specimen, the 1,500-year-old Kin-no-ichō. Tolerant of cold, many of the country’s most ancient ginkgoes are found in the northern Tōhoku region, an area famed for its harsh winters. Aomori Prefecture in the north of the main island Honshū is home to many of these aged giants, including a dozen with trunk circumferences of more than 10 meters.

The largest of these kyoju is the Kita-kanegasawa ichō. Located in the rugged Tsugaru region along a windswept hillside overlooking the Sea of Japan, the plant has developed over centuries into the grandest specimen of ginkgo in Japan, and quite possibly the world. Visitors making a trek to western Aomori are well advised to pay a visit.

The majestic tree is a lively tangle of branches and aerial roots. Some of the latter have lengthened to establish themselves in the ground or merged with the massive trunk, creating a lattice of differing parts. Standing next to such raw vitality, it is impossible not to be in awe of the plant’s extraordinary life force.

In Japanese aerial roots are sometimes referred to as chichi or oppai for the way they hang down, giving them a passing resemblance to female breasts. From this association, it is said that in early times nursing mothers whose milk had dried up would pray to ginkgo trees in hopes that the nourishing fluid would return. Local residents believed the Kita-kanegasawa ginkgo carried a similar power and would cut pieces of aerial root, also called tarachine, to boil and use as medicine. The treatment has never been scientifically validated, but locals held it to be effective enough to immortalize it in a well-known folksong from the region. 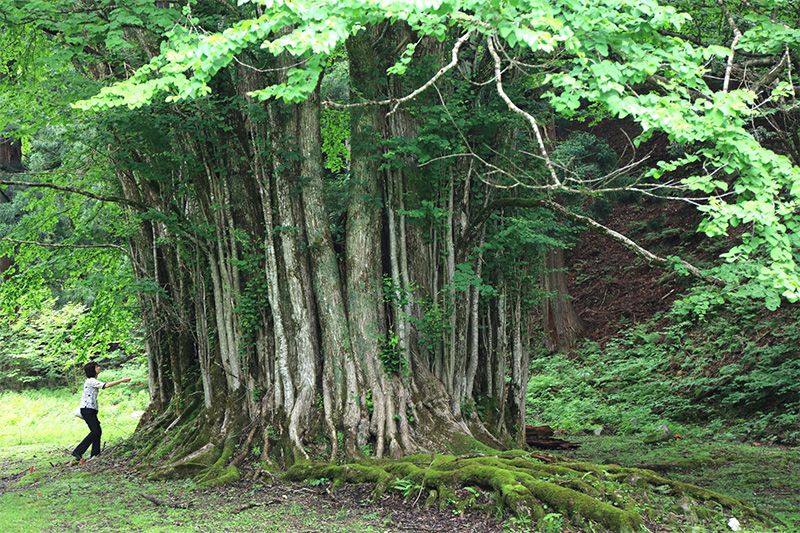 This magnificent katsura sits in a plunging valley near the headwaters of the Itoi River, an hour and a half drive north of the famed ruins of Takeda Castle, which can be viewed “floating” above a sea of surrounding clouds. It is renowned for its intricate bole, thought to be of record size for the species. Unlike many of Japan’s largest katsura it lays not hidden away deep in the mountains but within relatively easy walking distance of the road. The roughly 600-meter trail to the tree is well attended, offers benches and restroom facilities, and provides stunning views of nearby Mount Higashi-tokonoo.

The tree comprises some 80 mostly uniform shoots that have grown to encircle the plant’s decayed original trunk, giving the katsura an almost hollowed-out feel that adds to its noble form. Exposed roots stretching along the narrow banks of the nearby Itoi River attest to occasional rain-swollen deluges, and another giant root snakes 10 meters along the ground in search of cool, down-stream waters.

The sacred katsura has long been worshiped for its power to end drought. According to legend, a priest hung his robes from the plant during an extended dry spell as he prayed for rain. To his joy the skies opened up, and to this day the 2,000-year old giant is esteemed as the “robed tree.”

Katsura as a species are strongly associated with the forging of iron and steel. Kanayako, the patron god of furnaces, is said to have descended from heaven on the back of a white heron and alighted on a katsura. Metalsmiths frequently planted the trees near their dual-bellowed tatara furnaces out of deference to the deity. In early times the nearby mountains Higashi-tokonoo and Kanatoko were exploited for their iron deposits, raising the curious possibility that the grand Itoi katsura got its start in a similar fashion two millennia ago.

King of the Agariko (Akita Prefecture) 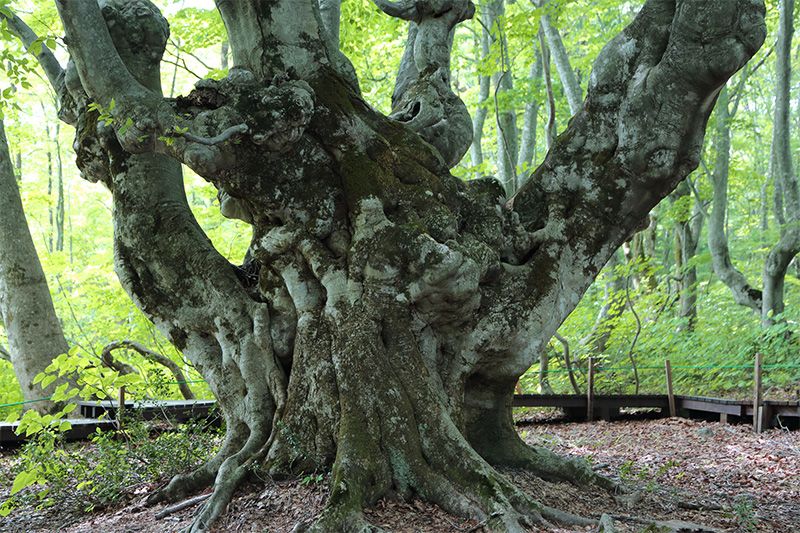 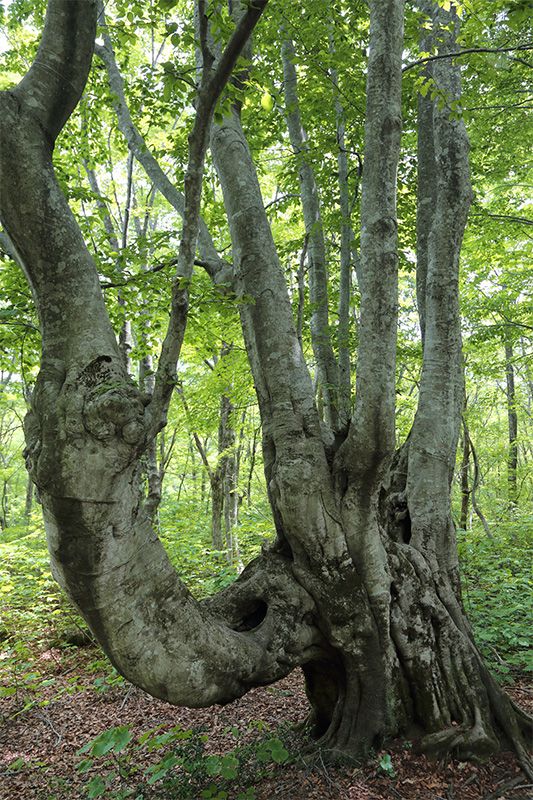 The “candlestick beech” opposite the king of the agariko is another impressive buna specimen.

The forest at the base of Mount Chōkai has in recent years received attention for its population of agariko—oddly shaped buna, or Japanese beech, whose robust, armlike limbs careen in all directions from sturdy boles. Surveys have uncovered the remains of over 50 charcoal kilns in the area, suggesting that the trees were once farmed for fuel. This practice likely led to the peculiar shapes of agariko as trees put forth sprouts from their severed trunks, bending and twisting as they grew.

The king of the agariko, a stout, 300-year-old specimen, surveys its wooded realm to the north of Mount Chōkai in an area designated as the Nakajimadai Recreational Forest. Covered in soft, pale bark and patches of moss characteristic of the damp environment, the tree’s bulging, two-meter-high trunk supports five spectacularly snarled limbs that create a scene of striking arboreal grandeur. The specimen has been selected included on the Japan Forestry Agency’s “100 Giants of the Forest” list, an honor that has brought more visitors and boosted preservation measures, including construction of a ringed path to accommodate the uptick in foot traffic.

The tree sits in a unique natural laboratory created by a debris flow from Mount Chōkai 2,600 years earlier, a volcanic event that leveled wide swaths of the forest. Agariko, a relatively recent arrival, are joined by rare, older specimens of beech and species of marimo moss that inhabit the wetlands around the volcano. Together these imbue the woodlands with a mystical, otherworldly feel.

(Originally published in Japanese on April 29, 2017. Photos and text by Takahashi Hiroshi.)