Culture Jul 6, 2017
In our ongoing series on Japanese old-growth trees, naturalist Takahashi Hiroshi visits three kyoju at the height of the rainy season. Tsuyu is an important time for these ancient plants, bringing respite after spring’s exacting renewal and nurturing rainfall ahead of the heat of summer.

As spring gives way to early summer, the fresh, verdant hues of forest canopies gradually deepen to darker shades of green. Seemingly full of life, trees, particularly deciduous varieties, in fact face an uncertain time with the changing seasons. After their vernal awakening, their reserves of energy from the previous autumn are nearly spent and must be replenished if they are to make it through the brutal heat of summer.

Relief comes in the form of the short-lived rainy season, or tsuyu, bringing with it restoring showers. Tsuyu begins in Okinawa Prefecture and slowly marches northward, sprinkling rain across the archipelago. The only areas untouched by the monsoons are the northernmost prefecture of Hokkaidō and the southern Ogasawara (Bonin) Islands. During the rainy season Japan receives upward of 25% of its abundant annual rainfall—roughly double the world average—dousing the land and shrouding woodlands in misty veils.

Amid the tsuyu drenched environment, mist accumulating on leaves and branches forms droplets. When they fall to the ground, it seems as if the forest is raining from within. Precipitation also creates snaking rivulets of rainwater that trickle down the irregular skin of trees before slowly soaking into the root systems of plants. Watching these phenomena, I’m always struck by the constant movement of moisture in the forest.

For kyoju, as old-growth trees in Japan are called, the enriching, soft showers of the rainy season are the opposite of the blustery deluges of autumn typhoons. However, monsoons also bring concerns of too little sunlight. In just the right amount, though, tsuyu rains fortify and prepare ancient trees for growth over the shimmering summer months.

Japanese often bemoan the uncomfortable stickiness and inconvenience of tsuyu, but a person standing beneath the outstretched limbs of an ancient tree swathed in a cooling mist may form a different image. Below I visit three old-growth trees glistening in the wet of the rainy season. 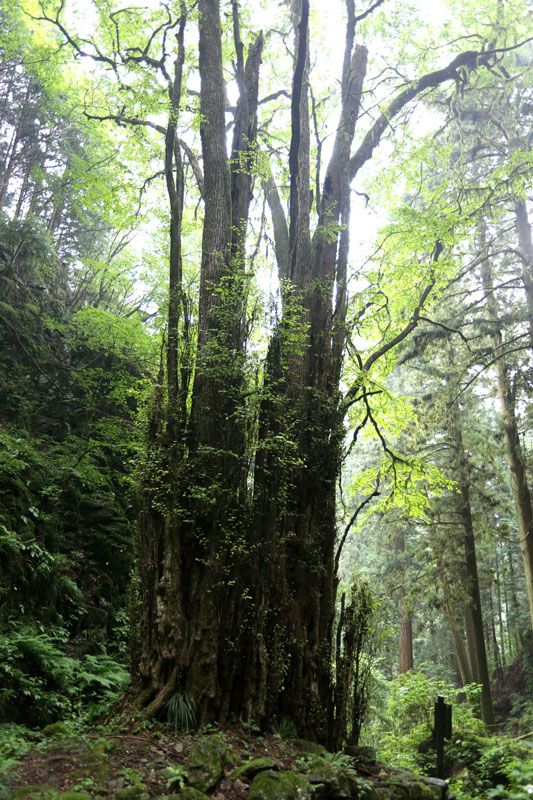 Among Japan’s profuse population of old-growth trees, the katsura is perhaps the species that most becomes the drip and drizzle of the Japanese rainy season. Dampened by the steadily falling tsuyu rains, the fissured bark and heart-shaped leaves of these aged plants radiate a vibrant, healthy sheen, making them a pleasure to observe.

The so-called thousand-limbed katsura at Mount Kaso is an especially impressive specimen, a majestic tree in Tochigi Prefecture that keeps watch over the deep woods beyond the ancient Kasosan Shrine. Reached by a narrow track that runs along a mountain stream toward distant Mount Ozaku, its coarse, moss-covered trunk is dyed dark earthen hues by the constant rainfall.

Depending on the angle of viewing, the trunk of the grand katsura can appear as a single, robust plant or as two conjoined trees. This illusion is due to the center of the bole having rotted away, leaving behind detached halves. Its aged plant is a shinboku, or divine tree, of the nearby Kasosan Shrine, and couples visiting the area often pray to its curious form in hopes of remaining together far into old age.

The katsura is also a popular resting place for hikers, who after venturing to this remote area are often unwilling to pass through without first setting down their packs and admiring its towering form. Having basked in the tree’s glory, they set off down the path with renewed vigor. 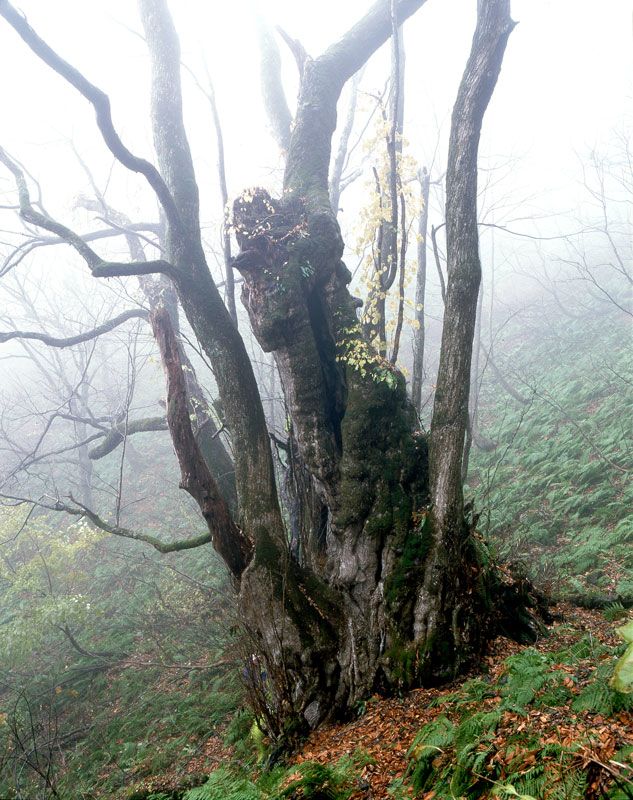 Another stunning katsura specimen sits near the summit of Mount Gongen in Yamagata Prefecture. Accessible by a forest path that skirts a bubbling mountain stream, the aged tree juts majestically from the steep, fern-covered hillside. When I ventured to the location, I was struck by the overwhelming tranquility of the surrounding forest, a phenomenon made all the more moving by the thick cover of mist produced by the unceasing tsuyu rain.

As is common with ancient katsura, the central portion of the tree has long ago crumbled away, leaving behind an opening large enough for a person to sit comfortably in. The species is also known for putting forth numerous shoots that over centuries expand the circumference of the trunk. However, the Mount Gongen katsura has only a small number of such growths, leading some experts to suspect it is younger than its gnarled appearance suggests. Such a prospect in no way detract from the plant’s grandeur, though. In fact, depending on the angle from which it is viewed, its robust, furrowed surface may even bring to mind the famed Jōmon Sugi of Yakushima.

The treehas been known to local hunters for centuries. In modern times, though, the construction of a hiking path and other local efforts have worked to bring visitors from outside the region. There are even guided services that will take hikers on tours around other large katsura in the area. 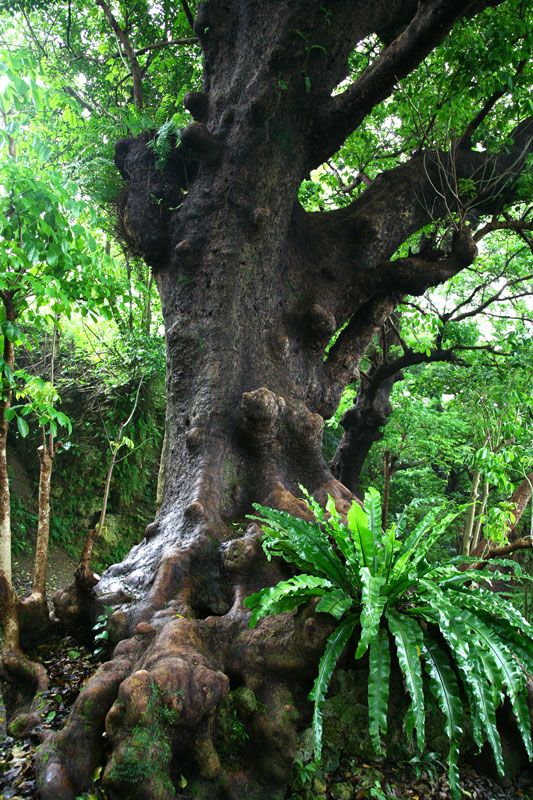 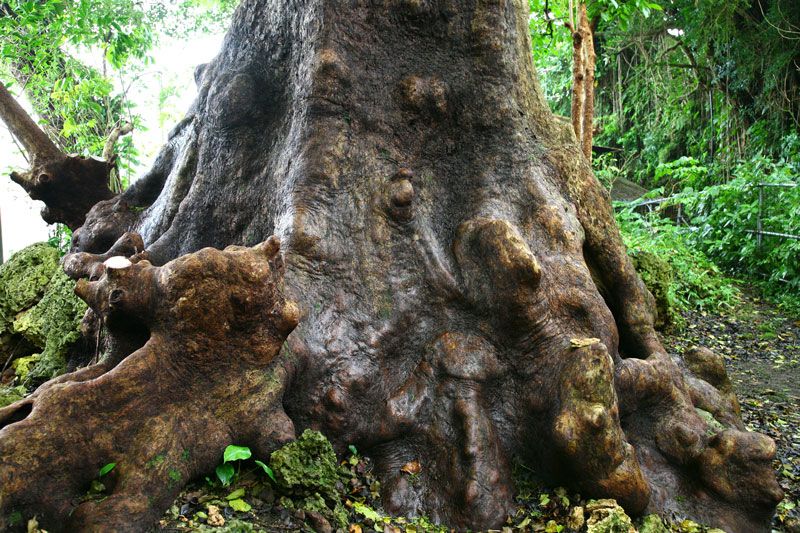 Walking the stone pathways of Shurikinjōchō, it is easy to imagine the days when the area was a bustling town at the base of Shuri Castle, the seat of power of the old Ryūkyū Kingdom. In the past the stepped lanes, paved with locally quarried limestone, were lined by numerous specimens of akagi, or bishopwood. The intense bombing Naha endured in World War II, however, destroyed all but six of these curiously shaped trees.

There is an undeniable tropical feel to the smooth, red bark and knotted appearance of these majestic giants. In the monsoon rains akagi take on a spectacular rust-colored sheen that is offset by the lush green bird’s nest ferns and other varieties of plants sprouting from the base of the trees. In testament to their vigor, they spread their robust roots across the ground, thrusting them powerfully into the soil.

The trees generally abide in quiet isolation, but in early summer they take a central role in an ancient Okinawan festival. By tradition, mid-June is the time when people return home to pay respect to tutelary deities who for one day a year take residence in the local shrine. As shinboku, akagi play an important role in the celebrations, much as they did when great numbers of the tree spread their branches across the stone paths of the ancient castle town.

(Originally published in Japanese on June 1, 2017. Photos and text by Takahashi Hiroshi.)