The Fascinating World of Japanese Onomatopoeia

Language Culture Dec 15, 2017
A well-cleaned floor shines pika pika, while a light, fluffy futon is fuwa fuwa. Japanese onomatopoeia is one of the language’s most intriguing features, with many linguistic discoveries to be made.

“Stop lazing about [goro goro] and look after the kids!” “Don’t chat idly [dara dara] on the phone!” “Don’t just hang around [uro uro] doing nothing!” Each time I hear my wife talk like this, I get nervous (biku biku). Japanese onomatopoeia is richly expressive for describing the nuances of many different situations.

It includes giongo, which are words used to represent sounds, such as animal noises. Gitaigo, on the other hand, are used to represent particular states, and the Japanese language is notable for its abundance of such words. For fluent Japanese speakers, it is perfectly natural to use them regularly. While all of the world’s languages feature onomatopoeia, they vary greatly in the sounds they use.

Derives from the word ira, meaning “thorn.” Used to indicate a displeased or irritable feeling.

Derives from the verb waku to describe water “gushing” out of the ground. Indicates excitement due to anticipation or happiness.

Example:
彼女が留学を終え、帰ってくる。ワクワクしながら空港に迎えに行った。
Kanojo ga ryūgaku o oe, kaette kuru. Waku waku shinagara kūkō ni mukae ni itta.
My girlfriend was on her way back from studying abroad. I was excited as I went to meet her at the airport.

Light and fluffy. Also used to describe this kind of object floating through the air.

The soft, sticky texture of some foods; soft and supple (of skin).

To be hungry; to be servile. Said to be an adapted form of the verb hekomu, “to become hollow.”

社長にペコペコする。
Shachō ni peko peko suru.
To suck up to the company president.

The rapid heartbeat caused by happiness, unease, fear, or surprise.

Japanese has relatively few verbs or adjectives compared with English or Arabic. The same verb naku is commonly used for making sounds, whether talking about birds, insects, dogs, cats, sheep, or frogs. However, different giongo used as adverbs, such as chun chun for small birds, wan wan for dogs, and kā kā for crows, prevent confusion. Perhaps the possibility of using different kanji for naku—including 鳴く, 啼く, and 哭く—was one reason for the limited development of other verbs.

By contrast, in languages like English and Arabic, there are different verbs for individual animal and bird noises. In English, dogs bark, lions roar, and frogs croak. There are a few alternatives to naku in Japanese, however, such as saezuru (to chirp), hoeru (to bark), and inanaku (to neigh).

There are also many giongo and gitaigo for describing how people laugh, walk, or eat. Smiling and laughing can be expressed with the words kera kera (for cackling), gera gera (guffawing), kusu kusu (chuckling), niya niya (grinning), niko niko (beaming), and nita nita (smirking).

Onomatopoetic expressions can pose particular challenges for the language learner due to their flexibility and broad range of meanings. To take just one example, the term goro goro can mean anything from the rumbling of thunder to the lazy “rolling around” performed by an idle person at home on the weekend. 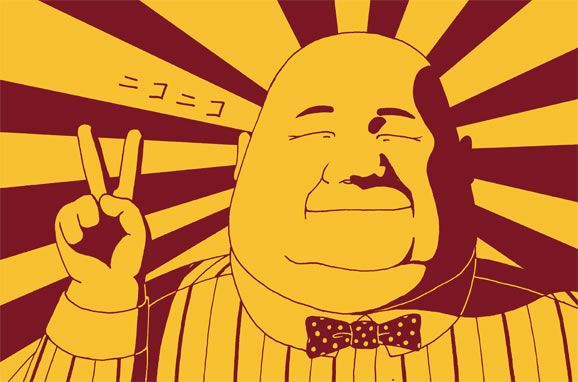 The Pain of Being Misunderstood

There is also a wide array of onomatopoeic words for talking about pain, whether it is kiri kiri, zuki zuki, piri piri, or jin jin. It is not always easy to distinguish these in English.

Yet, it is extremely useful to be able to describe pain when required to explain it to a medical professional. For example, when it feels like a repeated sharp, stabbing pain, it helps to describe it to a Japanese doctor as kiri kiri. As I have still not mastered onomatopoeic vocabulary, the agony of a stomachache can be aggravated by the inability to adequately express what I am feeling.

The world of Japanese onomatopoeia is a fascinating and entertaining one. I plan to continue making steady (don don) use of these words.

(Originally published in Japanese on September 18, 2017. Illustrations by Mokutan Angelo.)