Culture Feb 17, 2017
The delicate fragrance of the yuzu, or Japanese citron, has long been prized in Japanese cuisine. Now the West is discovering the culinary possibilities of this unique citrus fruit, thanks to a Spanish celebrity chef and the tenacious efforts of a small community in Kōchi Prefecture.

No Japanese chef’s kitchen would be complete without the Japanese citron, or yuzu. Rarely a star in its own right, the yuzu is nonetheless celebrated for the way a splash of its juice or a sliver of its zest can elevate dishes by imparting a distinctive yet refined fragrance found in no other citrus fruit.

Until fairly recently, the yuzu was virtually unknown outside of Japan. But in recent years, the word has been cropping up on the menus of top French and American restaurants as Western chefs and patissiers discover the possibilities of this very special ingredient.

Although originally brought to Japan from China, the yuzu has sunk its roots deep into Japanese society and culture. Often found growing in household gardens in the archipelago’s warmer zones, it has long been a familiar ingredient in Japanese cuisine. But it took a celebrity chef to raise its profile in the West.

Spanish chef Ferran Adrià seems to have been the single individual most instrumental in bringing the yuzu to the attention of Western chefs and gourmets. Famed for his creative and experimental gastronomy, Ferran Adrià won renown as head chef of the Michelin three-star restaurant El Bulli in northern Spain, which inspired the 2010 documentary El Bulli: Cooking in Progress.

Ferran Adrià discovered yuzu in 2002, during his first-ever trip to Japan. Hattori Yukio, head of the École de Cuisine et Nutrition Hattori in Tokyo, describes the episode as follows.

“I had brought Ferran to Mibu in Ginza, a restaurant specializing in Kyoto cuisine. They served one dish flavored with a whole yuzu rind. After tasting it, Ferran called for the chef himself to bring him an actual yuzu. Right there, he took it in his hand and squeezed it to a pulp. Juice sprayed everywhere, and the whole area was permeated with the fragrance of yuzu. Ferran was so moved by the depth of the aroma, he had tears in his eyes.”

Back in Spain, Ferran was quick to spread the word, introducing the yuzu at the cutting-edge culinary conference and exposition Madrid Fusion.

Before long, Nakazawa Toshirō, who runs the Osaka-based food trading company Top Trading, noticed a surge of interest among the French chefs that he invited to Japan each year. “They began to pay more attention to distinctively Japanese ingredients, particularly yuzu,” he says.

“Unlike most chefs, Ferran is always eager to share his discoveries because his main goal is contributing to culinary culture,” Nakazawa adds. “When a top chef like that introduces the world to an ingredient like yuzu, that’s enough to get everyone excited about it.”

By 2006, Nakazawa was getting so many inquiries from France that he began mulling the possibility of exporting Japanese citrus abroad. In 2007, he took a step in that direction by launching exports of yuzu juice, powder, jam, and other processed products.

In 2008, Nakazawa met Katō Shinobu, director of Kitagawa-mura Yuzu Ōkoku, which manufactures products from the yuzu grown in the village of Kitagawa-mura in Kōchi Prefecture. Katō also had ambitions for expanding his yuzu products business, with an emphasis on building recognition of the premium Kitagawa-mura brand. These ideas began to find favor with local government officials when bumper crops caused domestic yuzu prices to collapse in 2009 and 2010, creating a strong incentive to expand the market overseas.

In June 2011, by dint of persistent lobbying in collaboration with a French importer, Nakazawa was able to organize the first yuzu-tasting event in Europe, featuring Kitagawa-mura yuzu. The tasting was held in Paris at the two-star Restaurant Senderens, where chef Jérôme Banctel and famed Japanese fusion chef Kumagai Kihachi prepared a multi-course meal for some 140 local chefs and food critics. Yuzu featured prominently in each course, from cocktails to dessert, and before the event was over, enthusiastic chefs were asking how they could get their hands on fresh yuzu.

However, exporting fresh yuzu was much easier said than done. Citrus fruit imports are often subject to strict quarantine and inspection requirements, and Japan and the European Union had yet to reach an agreement on export standards. 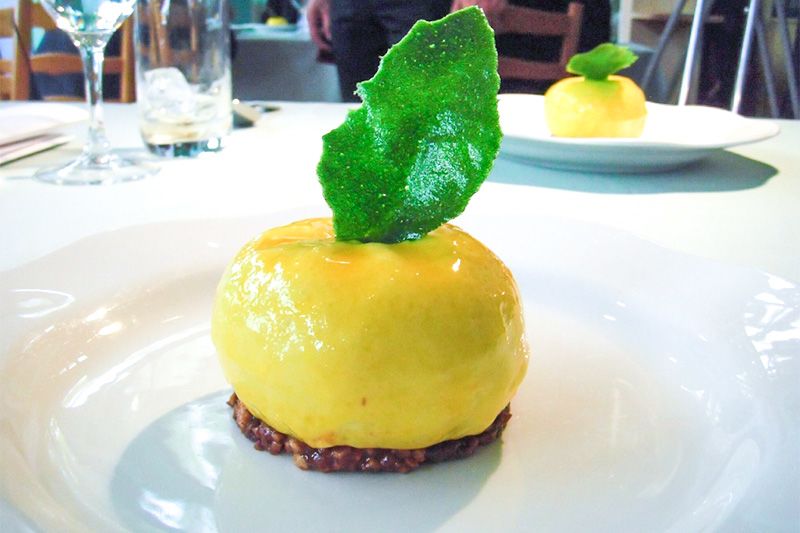 The tasting was a resounding success, but there were still major hurdles to overcome before Japan could begin shipping fresh yuzu to France. “As soon as we got home from Paris, all of us set to work: local officials and agronomists, farmers, exporters, everyone,” says Katō of Yuzu Ōkoku.

The first step was to select a model orchard capable of creating a production environment that would satisfy the EU’s strict export requirements. The honor went to Tosa Kitagawa Farm, Kōchi Prefecture’s largest producer. 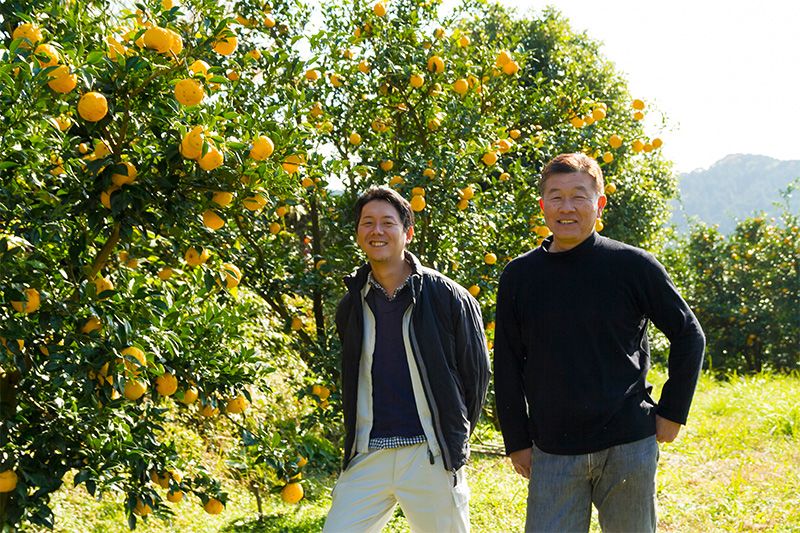 The farm’s biggest challenge, according to proprietor Tadokoro Masaya, was to slash the use of agrochemicals while at the same time making sure the fruit was free of pests and disease. “They permit only about one-third of the pesticides that you’re allowed to use in Japan,” explains Tadokoro. “And the standards for chemical residue are extremely strict, too. The agronomy experts in the prefectural government had to draw up a whole new farming plan. We couldn’t use herbicides, so we had to mow all the grass by hand. And we had to establish a ten-meter buffer zone all around the section of orchard we had set aside for export yuzu. The requirements were a hundred times tougher than for the domestic market.”

Finally, in February 2012, the Japanese Ministry of Agriculture, Forestry, and Fisheries reached an agreement with the EU on quarantine conditions for Japanese citrus fruits being exported to Europe. The groundwork was finally laid for the export of fresh yuzu. 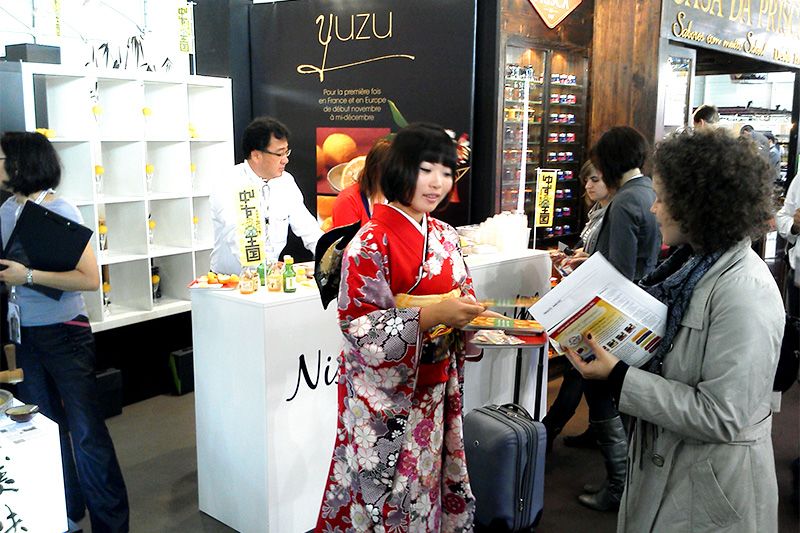 Kitagawa-mura yuzu products on display at SIAL Paris in the autumn of 2012. (Courtesy of Kitagawa-mura)

The following October, fresh yuzu made their debut at SIAL Paris, Europe’s biggest food products trade fair. Over the course of three days, prospective buyers staked their claim to all the yuzu Japan was able to export that season. Commercial exports to France began the following November. Since then, demand has continued to rise, outstripping local production capacity.

A Matter of Life and Death

The Kōchi Shimbun, a regional newspaper, has reported encouraging year-on-year growth in yuzu exports. Exports of fresh yuzu and yuzu juice combined were valued at ¥26 million in 2010 and ¥40 million in 2011. In 2012, the year the EU opened its doors to fresh yuzu, volume soared to ¥89 million, and by 2014 it hit ¥130 million. In 2016, Kitagawa-mura alone exported 4 tons of fresh yuzu. 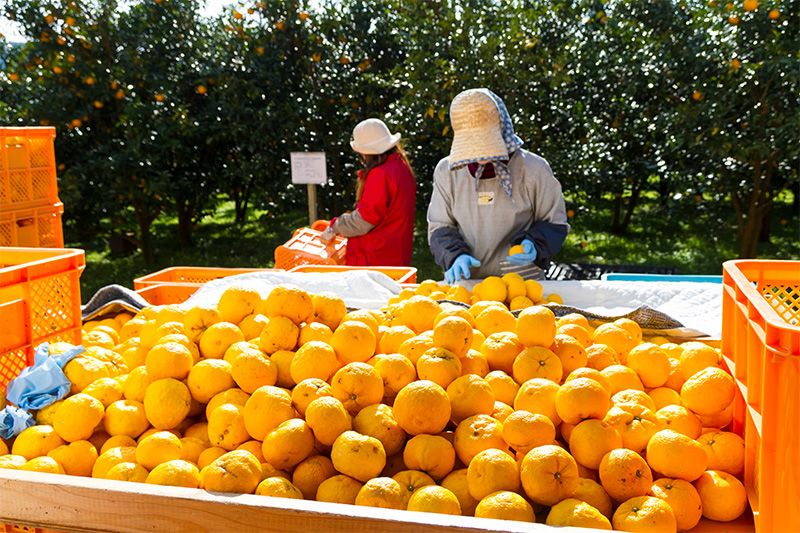 Like many rural communities in Japan, Kitagawa-mura is facing a serious farming crisis. The average age of its producers is over 70, and successors are in short supply. Amid this bleak landscape, the success of the recent export drive has kindled new hope for the future. Participation in local workshops on cultivating yuzu for export jumped from 48% in 2011 to a full 91% in 2012.

Visiting France for another trade fair in January this year, Ōtsubo Takashi of the municipal government’s Agricultural Division saw grounds for optimism. “In just four years, name recognition has risen sharply. Local supermarkets are even selling yuzu-flavored cookies,” he reports.

Still, Ōtsubo recognizes that Europe’s yuzu market is still in its infancy. Moreover, he understands that stringent regulations continue to make the production of yuzu for export a labor- and cost-intensive undertaking. “By going to the trouble of exporting fresh yuzu, we’re hoping to spread awareness of the Kitagawa-mura brand and the special taste of our product with the ultimate aim of expanding exports of Kitagawa-mura yuzu juice.”

For the struggling village of Kitagawa-mura, population 1,300, the real challenge lies ahead.

(Originally written in Japanese. Banner photo: A section of orchard on Tosa Kitagawa Farm dedicated to production of yuzu for export to Europe. Photo by Kusano Seiichirō.)