The Enterprising Village at the Heart of the “Yuzu” Boom

Economy Nov 22, 2017
At the epicenter of the yuzu boom, the tiny village of Umaji in Kōchi Prefecture is an inspiring example of a rural community that rebuilt its economy through homegrown entrepreneurship centered on a traditional local product.

In the hills of eastern Kōchi Prefecture, on the island of Shikoku, lies the village of Umaji, population approximately 900. Like many of Japan’s outlying communities, it has struggled to adapt to a changing economy. Yet Umaji, whose name has become virtually synonymous with yuzu (Citrus junos, or Japanese citron), has risen to the challenge as an intrepid driver and deserving beneficiary of Japan’s yuzu boom, developing and marketing its own popular line of yuzu products.

The Heart of Yuzu Culture

“It’s probably fair to say that Japan has no equal in the variety of sour citrus fruits we produce,” asserts Tōtani Mochifumi, president of the JA Umaji agricultural cooperative. The impressive list includes sudachi, kabosu, shikwasa, jabara, kinkan, daidai, busshukan (Buddha’s hand), and banpeiyu, as well as yuzu—all highly acidic fruits prized for their aroma and used mainly for flavoring or garnishing, as opposed to snacking.

Among these, yuzu has a particularly long and illustrious history of use in fine Japanese cuisine, thanks to its extraordinary fragrance. But outside of Kōchi Prefecture, which grows about half of all the yuzu produced in Japan, consumption was fairly limited until the 1970s. “Only the zest was used, to impart its aroma to certain dishes,” explains Tōtani. Sudachi was applied to accent Pacific saury and matsutake mushrooms. Kabosu, and daidai were the citrus of choice for tart ponzu sauce. “It’s only in the past few decades that the whole fruit has been put to use. The juice and pulp have emerged as popular ingredients in savory dishes and desserts alike; even the seeds are used.” 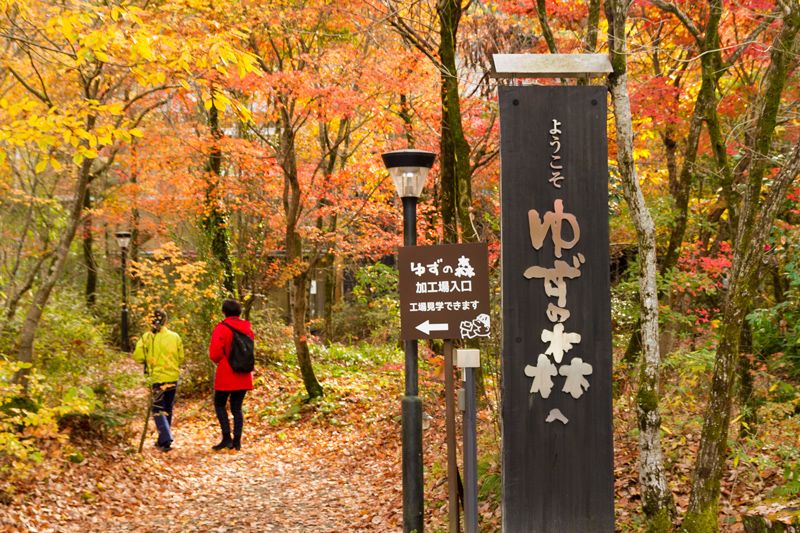 A forest leads to the processing plant, which is open to visits.

Yuzu is not the easiest crop to cultivate. The trees have long, sharp thorns, making harvesting labor-intensive. Moreover, the seedlings take a long time to mature. “The old saying round here is, ‘Three years for peach or chestnut, eight years for persimmon, and eighteen years for silly old yuzu,’” says Tōtani. Propagation by grafting shortens the time it takes to bear fruit, but trees grown from seed yield more aromatic and acidic yuzu, highly prized by professional chefs. This is the kind of yuzu generally cultivated in Umaji.

Until the 1970s, however, the fruit’s contribution to the local economy was dwarfed by logging, long the area’s key industry. The town’s attempts to expand yuzu production to supplement forestry date back to around 1960. But early efforts to boost sales of yuzu juice were unsuccessful; Japanese consumers preferred imported lemon juice, finding the highly aromatic yuzu tricky to use.

Still, Tōtani had faith. In Kōchi Prefecture, yuzu has long been used in place of rice vinegar in dishes like sushi and pickled mackerel (shimesaba). “I’d been consuming yuzu since I was a child, and I’d never tired of it,” says Tōtani. “So, I never once doubted that its popularity would eventually spread throughout Japan.”

Kōchi Prefecture’s regional take on sushi, featuring sushi rice made with yuzu juice and topped with wild and cultivated vegetables.

In the early 1970s, as the domestic forestry industry entered a steep decline, Tōtani embarked on a one-man campaign to disseminate Kōchi’s “yuzu culture.” He spent his weekends driving around the country, introducing people to Umaji yuzu at department stores’ regional food fairs and similar events. His efforts to raise yuzu awareness got a big boost when Mitsukan came out with its hit product Ajipon, a soy-based citrus-flavored dipping sauce (ponzu soy sauce), along with a yuzu-flavored variant, Yuzupon.

Around the mid-1980s, the region’s agricultural cooperatives began channeling resources into the production and sale of yuzu juice. One objective was to stabilize income for yuzu growers, for whom a bumper crop could cause a disastrous crash in prices. Some villages encouraged outside companies to set up local processing operations, while others specialized in supplying raw yuzu juice for processing elsewhere. But Tōtani, then assistant manager of JA Umaji, saw little advantage in simply providing yuzu juice for big companies, which could easily force prices down whenever supply levels rose. So JA Umaji embarked on a risky venture. It decided to produce and market its own value-added yuzu products, planting additional trees for this purpose. The program was linked to construction of a market and other facilities aimed at creating new jobs for local residents.

It was an ambitious project for a tiny, underpopulated rural village. Unlike big corporations, JA Umaji had precious little to spend on marketing and advertising. Fortunately, the groundwork had already been laid. In 1986, the cooperative launched its own brand of bottled ponzu soy sauce, Yuzu no Mura, made from Umaji yuzu juice (together with soy sauce, sugar, and other flavorings). In 1988, the product won the gold medal at Seibu Department Store’s 101 Japanese Villages fair. The same year, JA Umaji launched Gokkun Umaji-Mura, a soft drink made from yuzu juice and honey, which won the 101 Villages prize for agricultural products in 1990.

On the Crest of the Yuzu Boom

Today, three decades later, Yuzu no Mura (retailing at ¥580 for a 500 ml bottle) is Japan’s most popular yuzu ponzu soy sauce, with annual sales of around ¥1.5 billion. Gokkun (retailing at ¥130 per 180 ml bottle) brings in another ¥500 million annually. Altogether, the village of Umaji, with a population of around 900, takes in more than ¥3 billion a year. Its innovative and successful campaign to revitalize the local economy by building on a traditional product put it at the forefront of Japan’s yuzu boom and earned it a reputation as a trend-setting community. 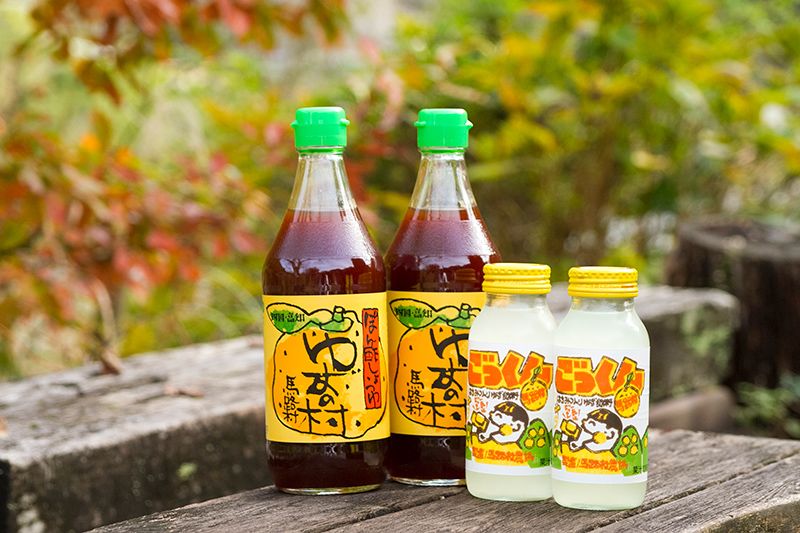 Yuzu no Mura ponzu soy sauce (left) and Gokkun Umaji-Mura, a soft drink made from yuzu and honey (both produced by JA Umaji agricultural cooperative).

In 2001, in another example of forward-looking entrepreneurship, Umaji growers began cultivating yuzu using organic methods. Since then, 10 of the 190 growers belonging to JA Umaji have had their product certified under the Japanese Agricultural Organic Standard (JAS), and all of them apply organic methods. The use of fertilizer and pesticide follows strict JAS organic standards, and the use of herbicide is prohibited. 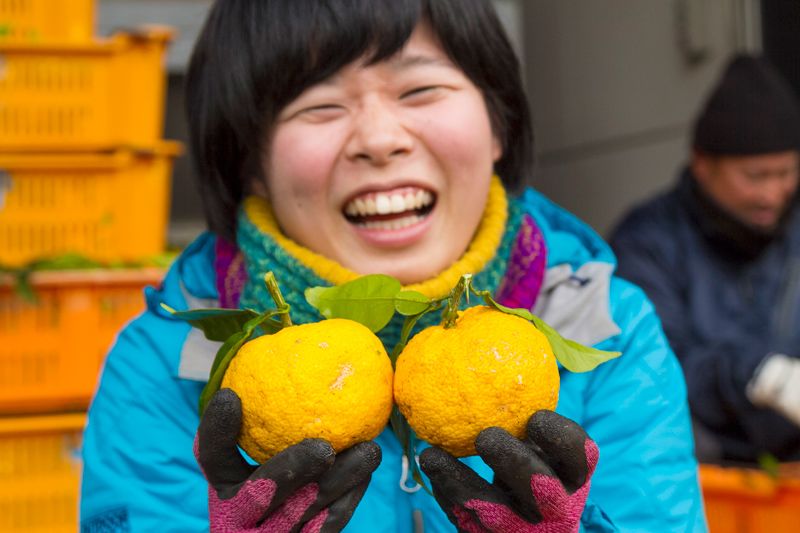 Today, JA Umaji sells about 60 different yuzu products. Moreover, in one year, the village attracts some 50 times as many visitors as it has residents. Prominent among these are industrial tourists. Between 250 and 300 groups tour the village’s facilities each year, eager to learn how Umaji has reversed its economic decline without relying on investment by outside businesses. 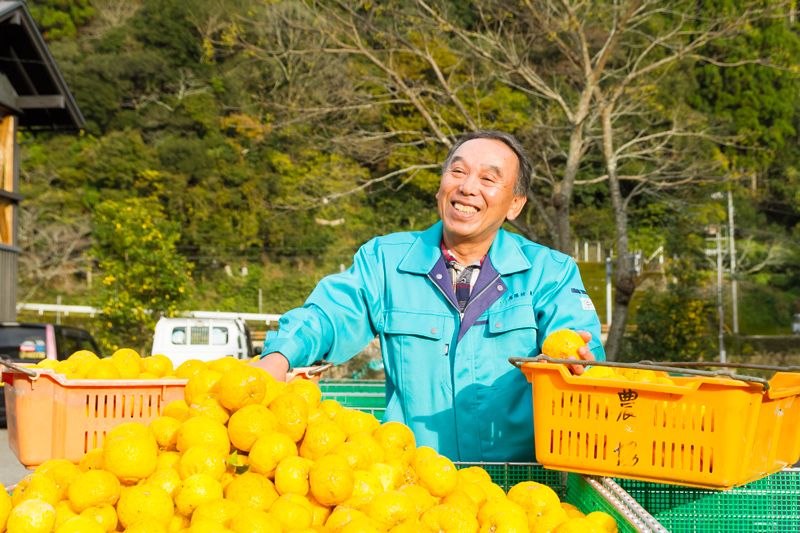 Tōtani Mochifumi inspects a load of yuzu on its way to market.

As Tōtani readily acknowledges, the village still faces big challenges. Its population has continued to plummet, falling from about 3,200 at the beginning of the millennium to a mere 900 today. But Tōtani has faith in the potential of his community and the product that has put it on the map. In addition to expanding tourism and growing the best organic yuzu in Japan, he dreams of expanding their line of cosmetics made from yuzu-seed oil.

Like the yuzu it grows, Umaji’s flourishing new economy is the fruit of a tiny seed, painstakingly cultivated over many years. Distinguished by bold innovation as well as patience, the village’s revitalization efforts will doubtless continue to evolve in the years ahead, offering inspiration to countless rural communities around Japan.