The Roots of Mindfulness: Hakuin Ekaku and the Art of Zen

Culture Jan 23, 2017
Zen Buddhism has had a profound impact on Japanese society and culture. Today the influence of Zen “mindfulness” is felt throughout the world. In this article we look at the human side of the great Zen masters of the past and the ways in which Zen continues to be relevant to people in contemporary society.

Zen teaches us to look unflinchingly at reality. It is a philosophy rooted in practice, the heart of which is zazen, or meditation. The monk Hakuin Ekaku (1686–1769) played a key role in preaching the effectiveness of Zen meditation as a way of cultivating a healthy body and mind, teaching that meditation held the secret to living a long, healthy life. In this article, we look at the living tradition of Zen meditation and some of the remarkable art it has inspired over the centuries.

Imagine yourself seated in meditation, an egg-shaped pat of butter on your head. Gradually, the butter melts and oozes slowly down from your head onto your shoulders. This is the “nanso method,” a form of introspective meditation developed by Hakuin Ekaku. Hakuin taught his students to picture the butter melting and running down their body as they meditated. He believed that repeating this practice could make people more aware of their minds and bodies, and bring them closer to enlightenment. With time, the practice has the strength to cure our physical ailments and can bring success in any chosen path in life.

Today, the practice of meditation or “mindfulness,” of concentrating on the breathing and becoming aware of the body, is increasingly popular with people all around the world. Zen meditation has been shown to be effective in healing illnesses, and some international companies have introduced it to the workplace in the belief that it can help to make the work process more efficient. The soft butter technique can be said to lie at the root of the modern fascination with “mindfulness.”

A Visit to the Daruma Temple

Located in the Kamigyō district of Kyoto, the temple Hōrinji belongs to the Myōshinji sect of Rinzai Zen Buddhism and is affectionately known as the “Daruma temple.” Daruma dolls are a familiar part of everyday life in Japan—the roly-poly good-luck charms made of papier-mâché are found in thousands of homes and workplaces throughout the country. But before becoming a good-luck charm, Daruma was a real person: a monk called Bodhidharma who brought Zen (Chan) Buddhism from India to China. The Daruma temple in Kyoto is closely associated with Hakuin, who famously drew countless pictures of Bodhidharma.

As I pass through the temple gates on a warm day in early autumn, the last of the muggy summer humidity still lingering on the air, I encounter a group of middle-aged women coming the other way. “Enjoy the temple,” they call out. “It’s pretty amazing!”

I see what they mean as soon as I enter the temple grounds. There are Daruma dolls and images of all shapes and sizes everywhere I look. There must be thousands of them.

The resident priest Sano Yasunori takes a break from his duties to tell me about the teachings of Hakuin, which continue to inspire people around the world. 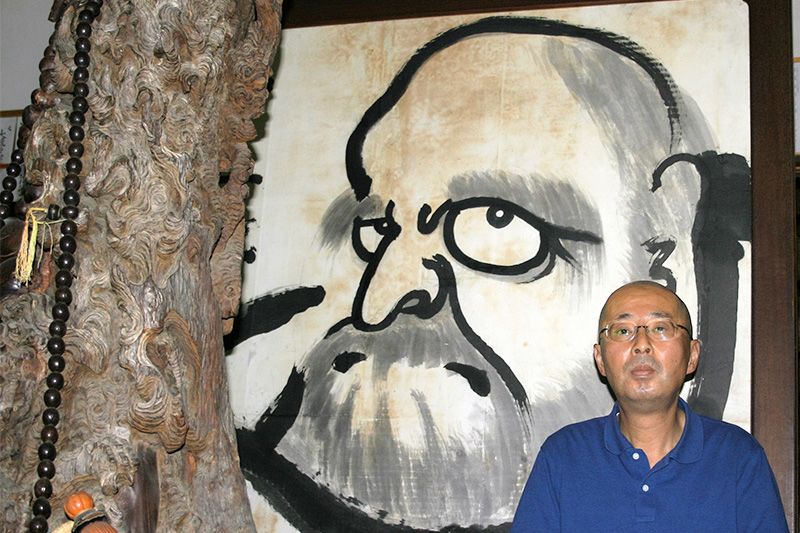 Sano Yasunori, priest at Horinji, standing in front of a giant portrait of Bodhidharma (Daruma). (Photo by the author.)

“Many people in modern society no longer have well-balanced bodies and minds,” he says. “This leads to imbalances and stresses. People rely on doctors and modern medicines, but in fact human beings have a natural strength that comes from inside us. Zazen and meditation can help you to order your mind. You will learn not to be get angry at unimportant irritations, and will be released from worrying about insignificant things. Maintaining that spiritual state is the best shortcut to success in anything you wish to achieve or do.”

A Special Exhibition of Zen Art 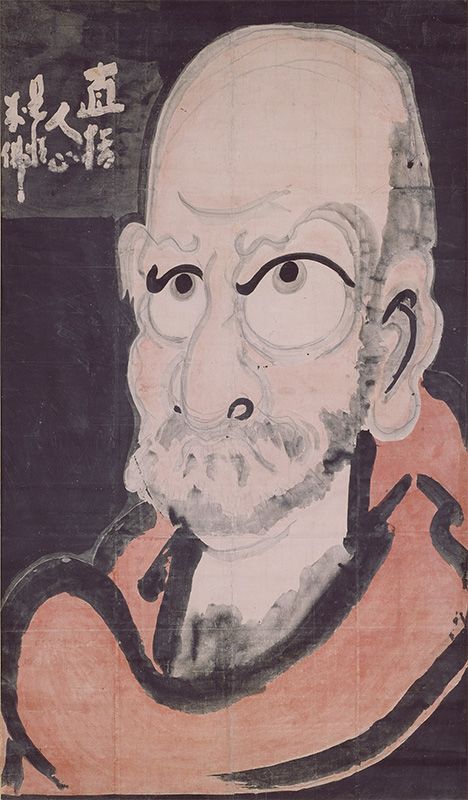 A number of events were held last year to mark 250 years since the death of Hakuin. With Zen enjoying a resurgence of popularity in Japan, many of these celebrations were well attended.

In mid-October, an exhibition called “The Art of Zen: From Mind to Form” opened at the Tokyo National Museum in Ueno Park. The exhibition was held to mark 250 years since the death of Hakuin and 1150 years since the death of Linji Yixuan (Rinzai Gigen), the founder of the Rinzai school of Zen. The exhibition brought together for the first time in 50 years many rare works of art, including 24 national treasures and 102 items classed as important cultural properties. The exhibition featured portraits of some of history’s most revered Zen masters, calligraphy by famous monks, Buddhist images, and other artworks. Many of the items were loaned by the head temples of the Rinzai school and the Ōbaku school that derives from the same lineage.

Visitors to the exhibition were greeted by a striking sight as they entered the entrance hall: a huge two-meter screen centered on a goggling pair of wide-open eyes. This powerful, humorous portrait is one of the famous depictions of Daruma painted by Hakuin. In the jet-black background is a Zen inscription: Jikishi jinshin, kenshō jōbutsu (直指人心 見性成仏), meaning "Look directly at the human heart, and by perceiving one’s nature, attain Buddhahood." This is the essence of Zen teachings. Hakuin left behind more than 10,000 paintings and pieces of calligraphy, which he used to convey Zen teachings in a way that was more accessible to ordinary people.

One unusual sculpture in the exhibition represented a good example of this attempt to render the sometimes mystifying message of Zen more accessible. It was a sculpture of Rahula, son of Shakyamuni (Siddhartha Gautama, the historical Buddha). Legend tells that Rahula was not blessed with good looks, but in this sculpture the gently smiling face of the Buddha can be seen peeping out from an opening in Rahula’s chest. One of Hakuin’s essential teachings was that all people were Buddhas at heart: Shujō honrai hotoke nari (衆生本来仏なり), "All beings are endowed with the Buddha nature from the first." This teaching is embodied in the very fabric of the sculpture. 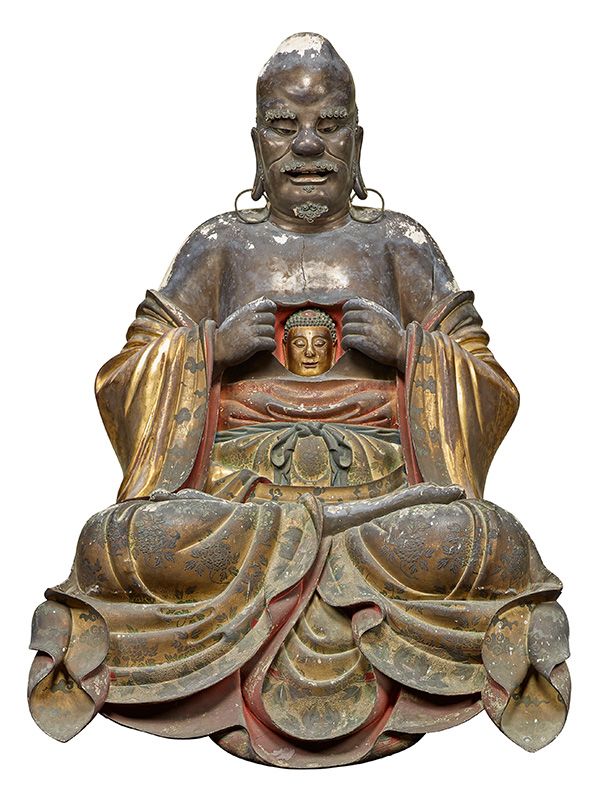 In Japanese, a person with a gentle, peaceful-looking expression is sometimes said to “have a face like the Buddha.” But not all Buddhist images are smiling exemplars of peace and tranquility. Some stand poised with fists clenched and raised, as though about to come rushing at the viewer in a fit of rage. Among the artworks at the exhibition was a portrait of the founder of Rinzai Zen, Linji Yixuan, depicted with “angry eyes and agitated fists.” The priest was famous for the merciless tongue-lashings he gave his disciples. It seems unlikely that many people could sit calmly and concentrate on their inner peace in the face of an instructor like this in the meditation hall.

Zen monks were not the only ones in the exhibition with troubling gazes. There were dragons whose eyes seemingly followed you around the room and fierce tigers that appeared ready to leap out of the screen at the viewer. These works gave a powerful sense of the passion and energy of Rinzai Zen, and its capacity to overwhelm the viewer even now. 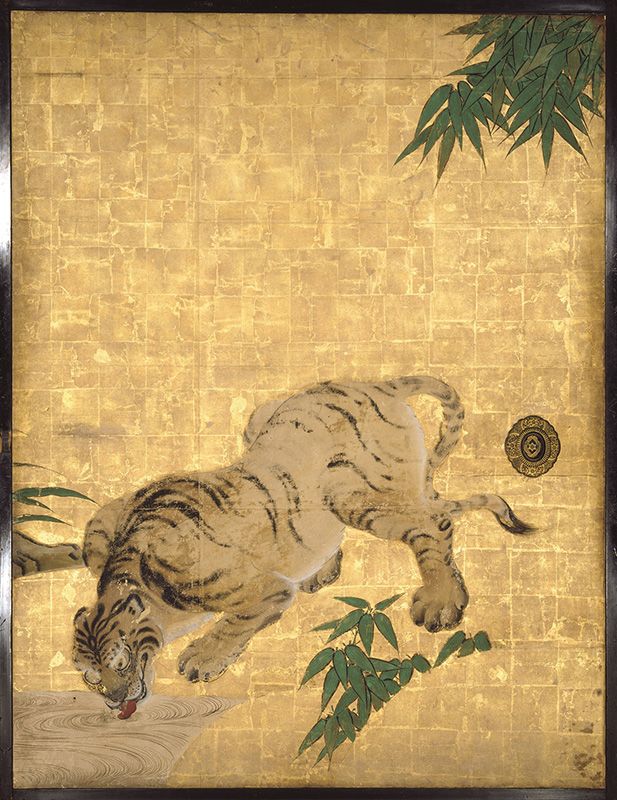 Tigers (from a set of panel paintings for the abbot’s chamber at Nanzenji) by Kano Tan’yu, Important Cultural Property, seventeenth century, Nanzenji, Kyoto.

Also on display was a shakuhachi flute once belonging to Ikkyū Sōjun 1394–1481), the eccentric Zen monk and poet. Visitors had the opportunity to listen to the tone of the instrument. There were also a number of National Treasures from the history of the tea ceremony, which initially spread under the influence of Zen, including a number of priceless bowls and tea containers. The displays served as vivid reminders of how deeply embedded Zen is in the mainstream of so many aspects of Japanese culture.

Finding Concentration in the Midst of Movement

Zen culture is certainly rich and diverse. While at the exhibit I asked Hasunuma Yoshinao, director of the Joint Council for Rinzai and Ōbaku Zen, how a person should go about approaching Zen in modern society. His answer was straightforward: “You just have to practice zazen, and work toward enlightenment in your daily life.” This senior figure in Japanese Zen is an imposing, almost intimidating presence, with a sharp gleam in his eyes. But as soon as he starts to speak, a softer, more approachable expression comes over his face.

“You just sit. Be at one with yourself. This leads to a state of mushin [無心, no mind], and shōjōshin [正常心, pure mind]. Imagine pouring muddy water in a cup. At first it might be muddy and black, but if you leave it to settle for a while, it will gradually clear. Eventually it will become transparent and you will be able to see through to the other side.

“But don’t try to throw out the mud. Everyone has some mud in their life.”

But for many people living busy modern lives it is extremely difficult to dedicate large amounts of time to sitting zazen. Seeming to read my mind, Hasunuma continues: “But you don’t necessarily even have to sit down to practice Zen. You can do it on the train, you can do it walking. It is enough to walk along with your heart at peace, without bothering about everything that it is going on around you. This is dōchū no kufū [動中の工夫], or concentration in the midst of activity. You don’t always have to seek mindfulness in quiet; it can also be sought in the midst of motion and activity. Hakuin even said that concentration in motion can be a hundred, a thousand, ten thousand times superior to concentration in stillness.”

Zen into the Future

Inspired by Hasunuma’s words, I concentrate on the sensation of the damp paving stones under my feet as I walk from the museum. A sweetness lingers in the air from the recent rainfall. The greenery of the trees in the park feels fresh and brilliant.

Zen can sometimes seem blindingly simple and mystifyingly complex at the same time. Perhaps it is this depth and complexity that have enabled it to have such a continuing impact on so many peoples and cultures around the world.

I remember what Hasunuma said in his opening remarks at the museum exhibition: “Most people are like ships in the fog. Zen transcends time and place, and will continue to shine its light into the lives of people far into the future.”