Zen and Politics: The Counsel of Yamamoto Genpō

Culture May 9, 2017
Located in Tokyo’s Yanaka district, Zenshōan is a Zen temple that has often been a sanctuary of reflection and meditation for some of Japan’s most influential figures, including several prime ministers. The temple’s role as a place of contemplation for the powerful can be traced to the enlightened samurai Yamaoka Tesshū and the Zen priest Yamamoto Genpō. The first installment of this two-part series looks at Genpō’s role as an adviser to several important political leaders during the wartime and postwar periods.

In September 2007, a visibly crestfallen Prime Minister Abe Shinzō, battered in the polls and suffering poor health, was forced to step down less than a year into his term and a mere two days after an optimistic speech laying out his administration’s general policies. Since returning as premier in 2012, though, Abe has projected an air of confidence that was conspicuously absent during his first stint in office. Reinvigorated and self-confident, he is now on track to be Japan’s longest-serving prime minister. This seemingly miraculous reversal has left many wondering as to what could have sparked such a dramatic turnaround.

One reason given is zazen. Seven months after resigning Abe visited Zenshōan, an unimposing Zen temple in Tokyo’s Yanaka district, to meditate. He returned nearly each month after that, and since retaking office he has continued to journey to the temple prior to pivotal events to sit in quiet contemplation. 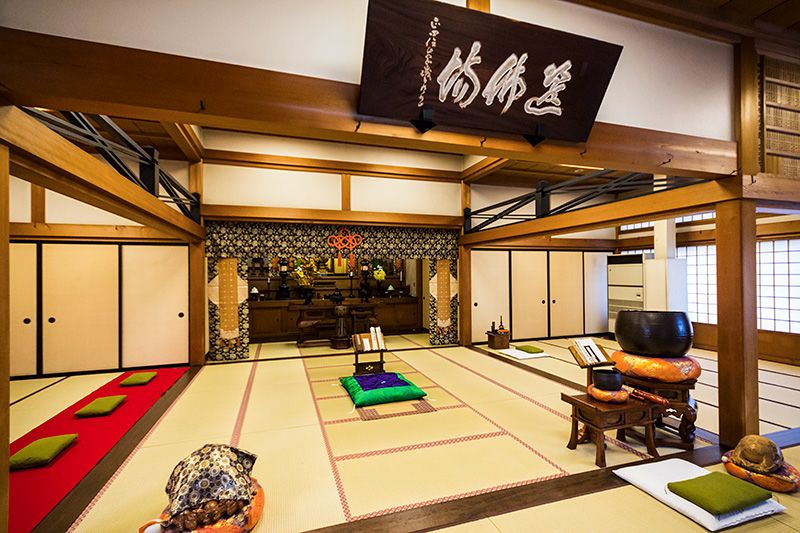 The main hall of Zenshōan. Visitors do zazen here or at a separate meditation hall.

A Sanctuary for the Influential 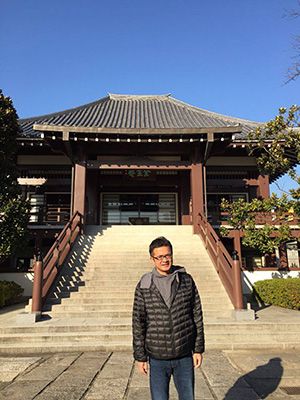 The author outside the main hall of Zenshōan.

Abe is far from the first influential figure to frequent Zenshōan, however. Prime Minister Nakasone Yasuhiro during his five years in office (1982–87) came to meditate 167 times, and it was his patronage that helped spread the reputation of the temple among the powerful. I have long wondered how a modest offshoot of Kokutaiji, a temple of the Rinzai sect of Zen in Toyama Prefecture, has come to draw the patronage of so many of the political elite. My research and discussions with Hirai Shōshū, the current head priest of Zenshōan, pointed to two individuals: Yamaoka Tesshū and Yamamoto Genpō.

These relatively unknown figures lived during two of the most tumultuous periods of modern Japanese history. During the Meiji Restoration Tesshū (1836–88) served as an emissary of statesman Katsu Kaishū, an influential figure who helped form what became the modern Japanese navy and famously negotiated the peaceful handover of Edo Castle to imperial forces led by Saigō Takamori in 1868. Genpō (1866–1961), on the other hand, was a Buddhist priest and a confidant of Suzuki Kantarō (1868–1948), who served as the last prime minister of the war era, from April to August 1945.

Tesshū, a loyalist of the Tokugawa shogunate, founded Zenshōan in 1883 to commemorate those killed in service of the feudal government during Japan’s volatile transition to a modern state. Genpō’s connection to the temple, however, is less clear, and I consider it below, along with his early support for Japan’s unconditional surrender. 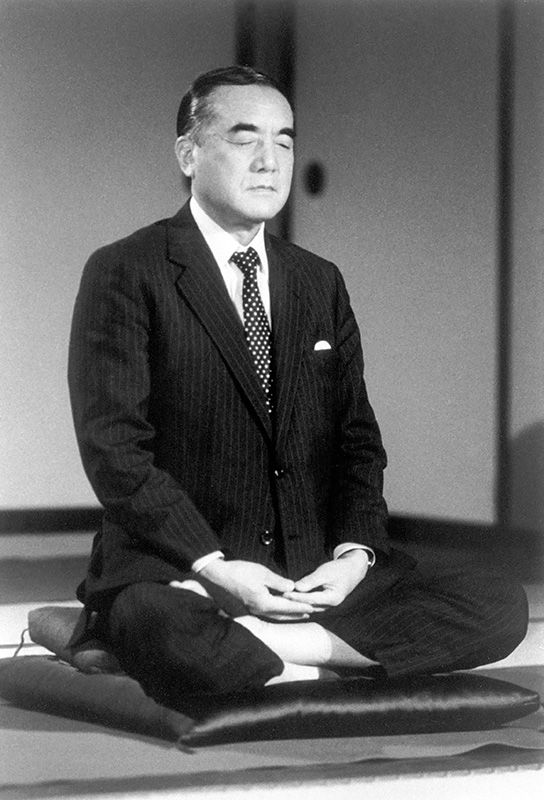 Genpō was the abbot of Ryūtakuji, an important Rinzai temple in Mishima, Shizuoka Prefecture. When his affairs brought him to Tokyo, though, he would hold sermons at Zenshōan and use the temple as a base for his other activities. According to Hirai, the current abbot, it was Genpō’s disciple, the influential political advisor Yotsumoto Yoshitaka, who first introduced Prime Minister Nakasone to the temple. Incidentally, Hirai’s father Genkyō was also an apprentice to Genpō for more than 40 years, beginning at the tender age of six.

Yotsumoto’s story is an unusual one. He had a checkered past: In his youth, as a leading member of a right-wing group, he was involved in a 1932 plot by the ultranationalist League of Blood to kill important business and political figures. The group, driven by growing social inequality, succeeded in assassinating former Finance Minister Inoue Junnosuke and Dan Takuma, the head of the Mitsui conglomerate. Yotsumoto was arrested and jailed for his role in the incident.

Genpō, who was already a well-respected and high ranking priest, appealed during the trial for leniency for group members, arguing they had been motivated by a selfless desire to rescue Japan from what they perceived as serious threats to the moral and economic fiber of society. His pleas seemed to have worked: Yotsumoto received a 15-year sentence instead of the life term sought by the prosecution. The priest paid frequent visits to Yotsumoto during his time at Tokyo’s Kosuge Prison and the two developed an extremely close bond. Through their talks the young inmate came to regret his actions; he came to view Genpō as a guiding figure in his life and developed a fervent zeal for zazen.

After his release Yotsumoto served as secretary to several prewar and wartime prime ministers, including Konoe Fumimaro (in office 1937–39, 1940–41) and Suzuki. In the immediate postwar period his influence grew as he forged a reputation as a power broker, serving as adviser to premiers Yoshida Shigeru (1946–47, 1948–54), Ikeda Hayato (1960–64), and Satō Eisaku (1964–72). His sway even extended to later leaders Nakasone and Hosokawa Morihiro (1993–94). 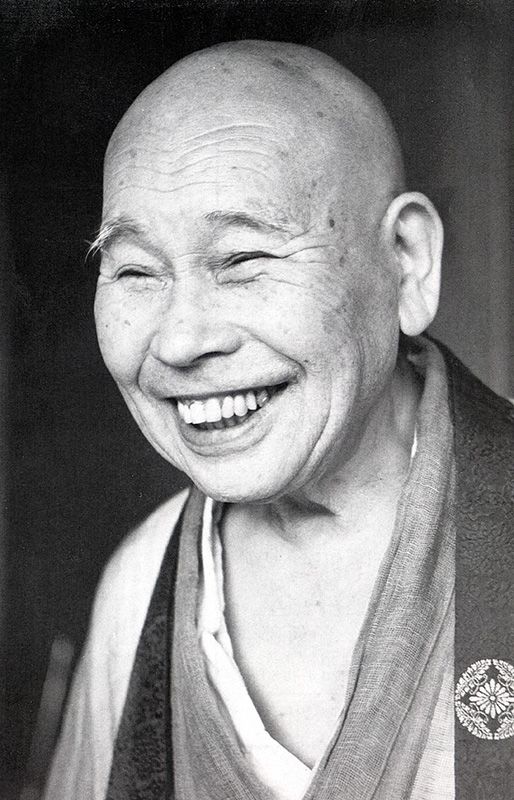 As head priest of Ryūtakuji, Genpō liked to assert that the door of his temple was open to people of all creeds, social statuses, and political persuasions. However, he made no attempts to disguise his opposition to Japan’s involvement in World War II, arguing from the onset that nothing good could come from the conflict. During the war years he hosted a string of leading politicians like Suzuki, Yoshida, and Ikeda, along with other influential figures including the liberal educator and postwar head of Gakushūin University Abe Yoshishige and Iwanami Shigeo, the founder of publisher Iwanami Shoten.

However, he refused to meet with Prime Minister Tojō Hideki (1941–44) on the grounds that he was too self-involved to understand the priest’s message. Many see Genpō’s disregard of the premier and his political connections as a thinly veiled attempt to create a bulwark against Tojō’s power.

Starting around 1942, a mere two years after he and other members of the League of Blood were pardoned, Yotsumoto began to meet with various senior statesmen to share his belief that Tojō had to be removed before his misguided policies ruined Japan completely. This message resonated most strongly with Suzuki.

A Message for the Nation 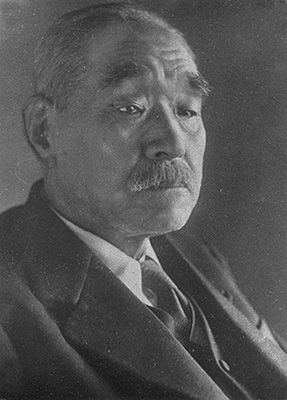 Near the end of March 1945 Yotsumoto set up a meeting between his teacher Genpō and Suzuki. At the time Suzuki was chair of the Privy Council and was contemplating whether to accept the role of prime minister. According to Yotsumoto, when the two figures met Genpō launched into a dialogue, saying that Japan could only salvage hope for its future by immediately stopping “this ridiculous war.” Suzuki wholeheartedly agreed with the priest’s sentiment.

Ten days later, on April 7, Suzuki took over as prime minister, ushering in a tense four-month period of high-stakes bargaining with the heads of the Japanese Imperial Army. Suzuki bided his time in bringing the war to an end, carefully keeping his plans under wraps until the last minute out of fear of triggering a coup d’état by the military.

Suzuki’s strategy eventually paid off, and on August 12 he sent word to Genpō of the decision to halt the war. The elderly priest immediately responded with a letter admonishing the leader to “endure the unendurable” as he sought to rebuild the nation. 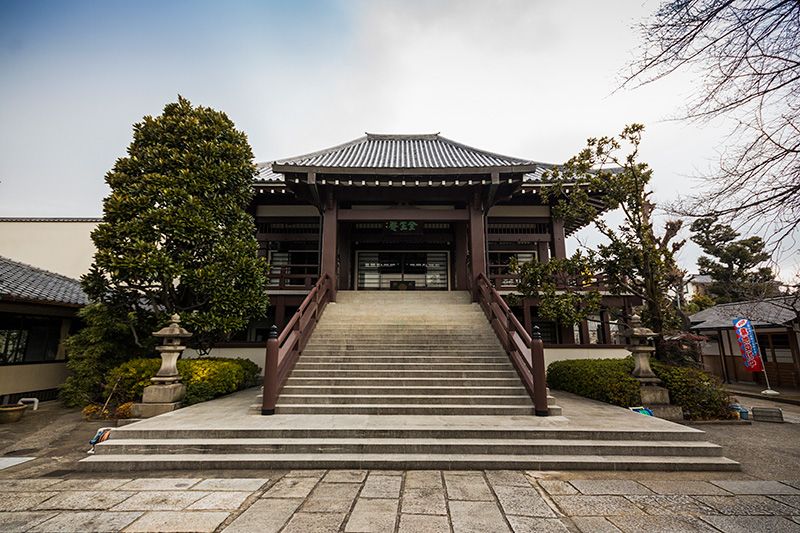 The main hall of Zenshōan.

(Originally published in Japanese on February 3, 2017. Banner photo: The front entrance of Zenshōan. All photos by Nippon.com except where otherwise noted.)