Stay at a hotel in Tokyo, and you will likely find several complimentary bottles of chilled spring water waiting in your room. As tempting as these may be to a road-weary traveler, guests before cracking one open should consider that some of the best drinking water in the city is a mere turn of the faucet away.

There is no shortage, however, of people who shun the idea of drinking from the tap and are instead willing to pay for pricy bottles of water. Experts are quick to point out, though, that the water sitting on store shelves and in vending machines is not necessarily of higher quality than that flowing from spigots, nozzles, and drinking fountains around Tokyo.

It may seem strange that a sprawling metropolis such as Tokyo would offer some of Japan’s finest drinking water. But before a single drop reaches consumers it must clear 51 strict quality standards set by the Ministry of Health, Labor, and Welfare, including checks for toxicity and harmful contaminants, along with tests to ensure a palatable tint, clarity, and smell. In fact, Japan’s regulations for public water supplies are more stringent than those governing bottled spring water. What takes Tokyo’s water a step higher, though, is the metropolitan waterworks’ strict treatment regimen that includes roughly 200 parameters for safety and quality.

Hashimoto Takashi, an employee at the Tokyo Metropolitan Government Bureau of Waterworks, vouches for the water the utility supplies to the capital’s 13 million residents. Hashimoto, who heads the Misono Treatment Plant in Itabashi, confidently says that he no longer bothers with bottled water. “Why should I when safe, clean water flows from the tap.” 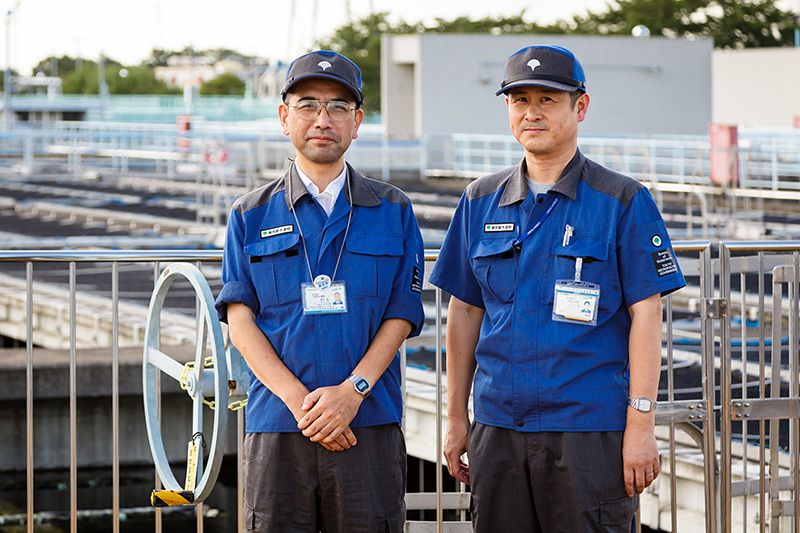 The Misono facility is one of five treatment plants run by the Tokyo Waterworks. It has a daily treatment capacity of 300,000 cubic meters and utilizes standard procedures along with advanced treatment of ozone and biological activated carbon. According to Hashimoto the advanced system removes nearly all the dissolved organic matter that standard treatment systems are unable to catch. 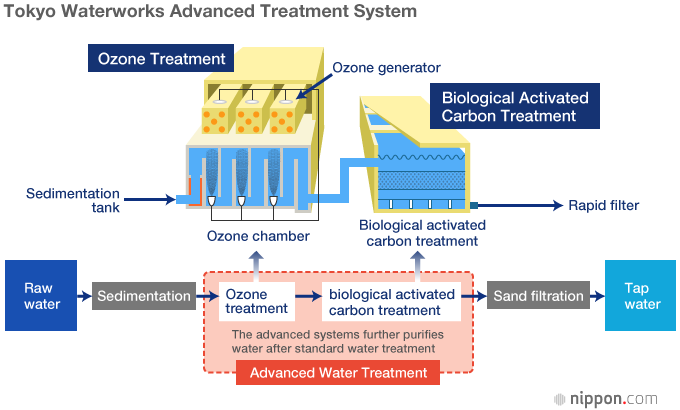 At the Misono plant, a window in the ozone contact chamber offers a glimpse at the interior of the treatment system. A 10-centimeter wide tube at the bottom of the tank diffuses a steady stream of minute bubbles that slowly ascend through the jade-tinted water. Ozone is a strong oxidizing agent and the bubbles in their effervescent journey to the surface react with inorganic materials, including trihalomethanes and other known carcinogenic compounds along with microorganisms such as bacteria and protozoa, eliminating potential health risks and improving the taste and smell of the water through nonchemical means.

Hashimoto says the ozone purification process takes around 20 minutes, pointing out that the miniscule size of the bubbles is a key factor in the treatment. “Fine bubbles improve efficiency by ensuring more ozone dissolves into the water and remains there over a longer period of time.” He points out, however, that the gas’s corrosive properties present some challenges for the plant. “It will quickly eat through a standard steel pipe, so we have to use stainless steel for the treatment facility.”

The ozone generator (left) is large enough for an adult to stand upright in, and (right) a window showing the inner workings of the ozone chamber.

In the second step of the advanced treatment system, water flows from the ozone chamber to filtration ponds containing different grades of biological activated carbon. In addition to  filtering out organic contaminants, much like a home water purifier, the microporous carbon also supports microorganisms that break down impurities and other byproducts of ozone treatment. If left behind, these contaminants can degrade the taste and smell of water.

According to Ogasahara Atsushi, who oversees filtration at the Misono facility, the plant lays 2.5-meter thick beds of activated carbon in 100-square-meter filtration pools at the site. Ogasahara explains that active carbon is very effective at purifying water, but that the beds gradually loses the ability to absorb organic material and must be replaced every four years to maintain efficiency. 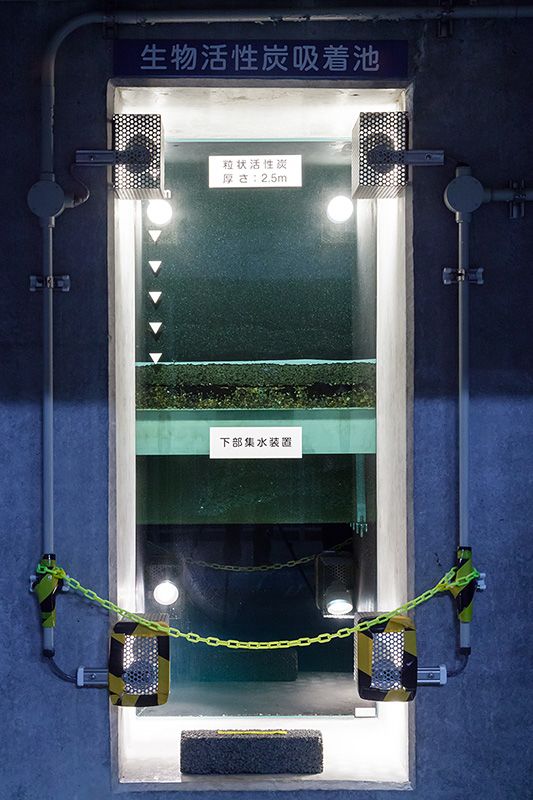 A window in a filtration pond shows the bottom layer of biological activated carbon.

The quality of source water determines the level of water treatment. Tokyo currently gets 80% of its water from the Tonegawa and Arakawa Rivers, drawing the remaining 20% from the Tamagawa River. Hashimoto explains that water from Tamagawa is pure enough that it only needs standard treatment to make it drinkable. The quality of raw water emanating from the first two rivers, however, is somewhat lower. But by applying advanced water treatment, the waterworks is able to bring the quality to an exceptionally high level. 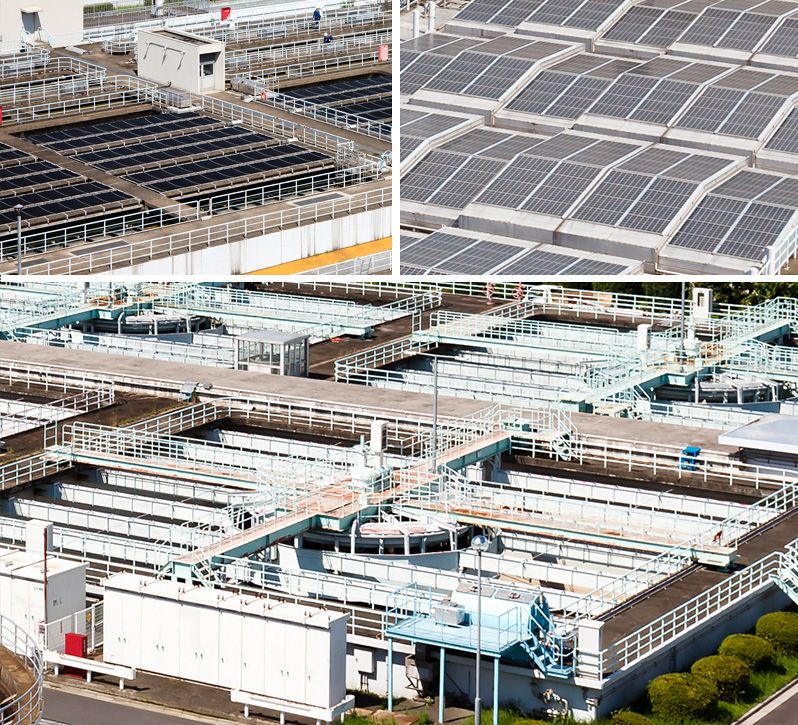 The Tokyo Waterworks proudly points to its experience and use of leading technologies as proof that it is one of the world’s leading treatment facilities. The water utility is continually on the lookout for ways to improve its operation, though, and to provide customers with safer, better-tasting water.

To accomplish this it has set along with government standards eight quality benchmarks that are aimed at eliminating substances that can cause an unpleasant odor or taste. It has two main culprits in mind: microbes and chlorination.

Japanese law requires the chlorination of drinking water to suppress the growth of bacteria and other microorganisms. It stipulates, however, that residual chlorine levels must be between 1.0 and 0.1 milligrams per liter by the time water reaches taps. While this is a narrow window, the Tokyo Waterworks has gone a step further by setting 0.4 milligrams as the upper limit for residual chlorine in water from its plants—a level it says renders the chemical undetectable to customers. Hashimoto describes the challenge in achieving this target: “After water leaves the treatment plant the concentration of residual chlorine steadily declines. Temperature and other variables can affect the rate at which this occurs, and it takes a lot of conscious effort to keep levels within the set parameters.”

In general, water utilities compensate for the decline in residual chlorine by adding larger quantities of the chemical prior to releasing water. However, this can cause the tap water of customers near treatment plants to have an unpleasant smell and taste. The Tokyo Waterworks combats this by carefully monitoring chlorine levels prior to releasing water and during transport, adding chlorine at pumping stations as conditions require. The result of these efforts is that consumers can enjoy delicious and odor-free water regardless of where they live in Tokyo. In 2015 the waterworks boasted an 89% ratio in achieving its 0.4-milligram target.

Along with its technical know-how, the Tokyo Waterworks takes other steps to ensure Tokyoites have access to top-quality tap water, including preserving and managing forests around water sources. Considering these extensive measures, the waterworks is still able to provide water service at a startlingly low price. In 2014 the average rate for tap water was a mere ¥0.2 per liter, far below the ¥100 or more that vending machines generally charge for a 500-milliliter bottle of mineral water. 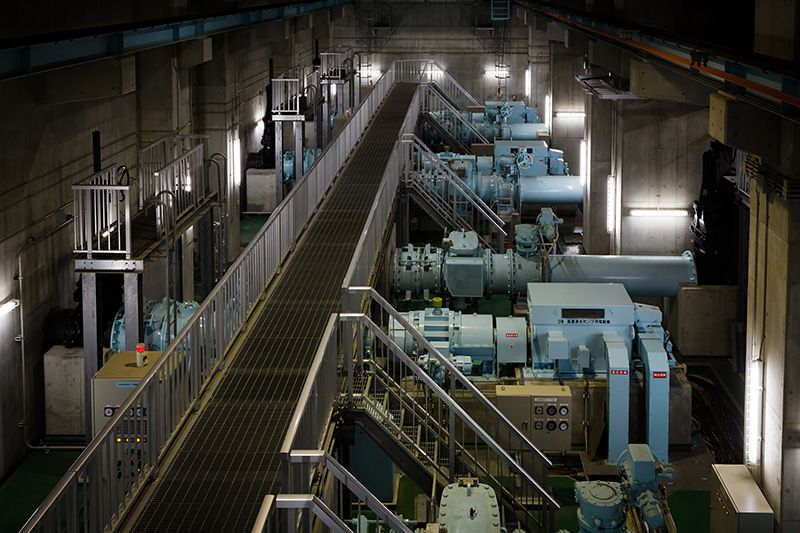 A row of pumps at the Misono plant. Similar pumping stations are located at strategic points to keep water pressure at a constant level throughout the metropolitan area.

Unfortunately, the stigma that water from faucets is unsafe and unpalatable persists. However, the Japan Water Works Association says local water utilities around the country are ramping up efforts to rectify this situation. These include offering bottled versions of tap water and holding events to educate the public.

As these efforts progress and begin to bear fruit, the JWWA hopes that residents and travelers will forego bottles and enjoy clean, delicious water straight from the tap. 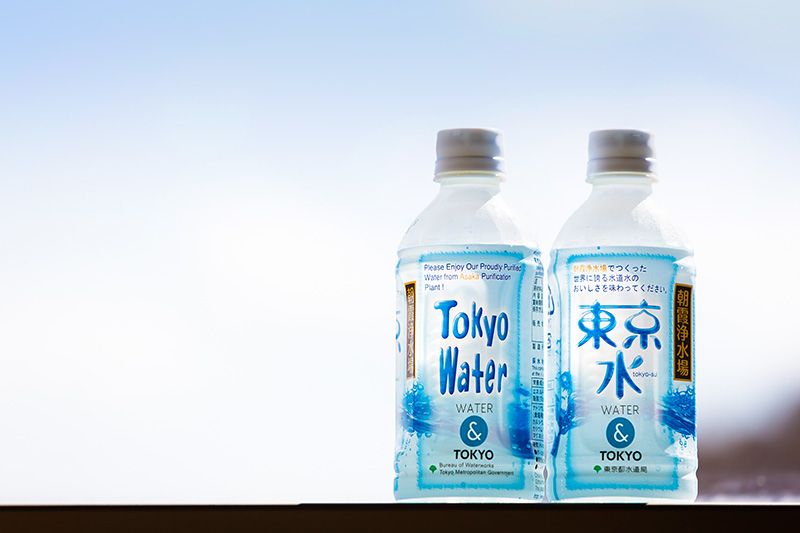 Tokyo offers bottles of tap water that show the treatment plant they come from.

(Originally written in Japanese by Masuda Miki and published on October 28, 2016. Photos by Miwa Noriaki.)