Cormorant Fishing: An Ancient Tradition to Mark Each New Summer

Culture Aug 16, 2017
Cormorant fishing, a method that involves lighting a fire to lure sweetfish and catching them with tamed cormorants, is today a popular tourist attraction that marks the beginning of summer in Japan. This is the story of the men and birds involved in Japan’s most famous cormorant fishing on the Nagara River.

Delightful, and yet
Presently how saddening,
The cormorant boats.

As shades of night fall on the city of Gifu, Gifu Prefecture, about 30 kilometers from the major city of Nagoya in Aichi Prefecture, a single firework rises above the surface of the Nagara River. In the background towers Gifu Castle on the peak of what was once called Mount Inaba, now called Mount Kinka, standing 329 meters above sea level. The light signals the start of the night’s cormorant fishing.

Carried On from Days of Old

Cormorant fishing on Gifu’s Nagara River is a technique that involves releasing a cormorant, bound by a snare connecting its neck to a boat floating downstream with the current. The bird catches fish as they are startled out from underneath rocks at the river’s bottom by the fire on the boat’s bow. The cormorant’s instinct is to swallow the fish whole, but it is unable to swallow the fish because of the snare tied around its neck. The fisherman then reels the bird in and makes it cough up the fish stuck in its throat. 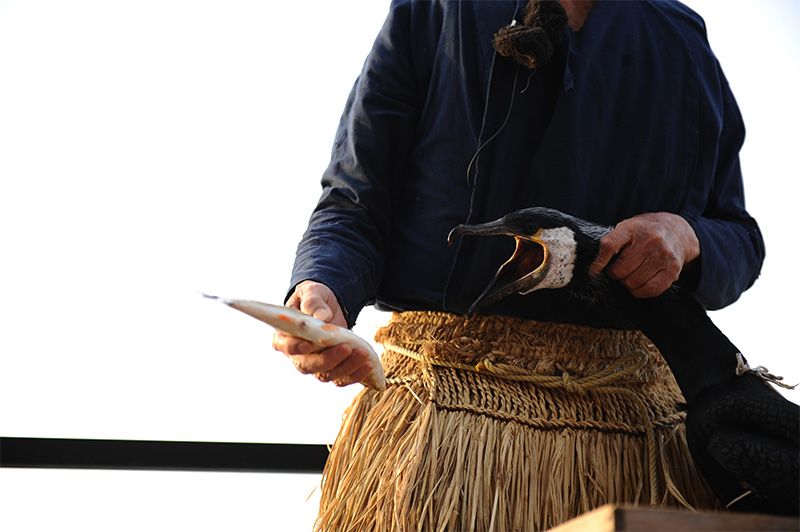 The fisherman makes the cormorant cough up the sweetfish. 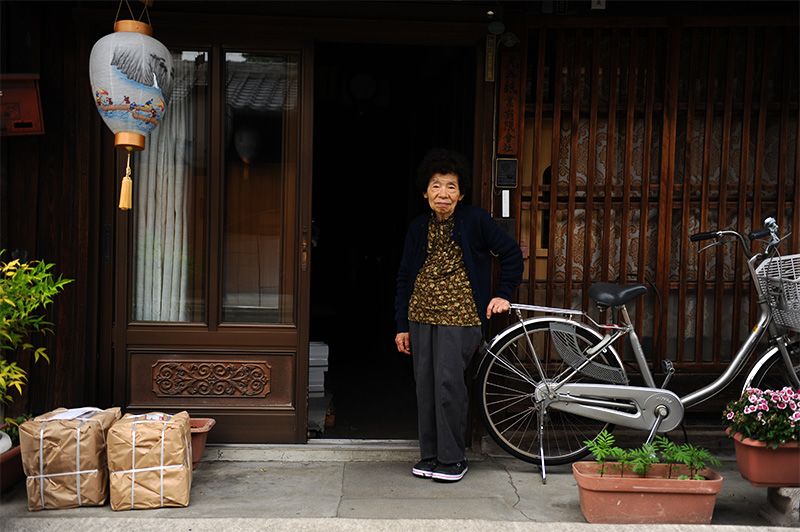 Traditional Japanese townscapes are still to be found along the Nagara River, where cormorant fishing is practiced.

Sweetfish for the Imperial Table

Nagara River cormorant fisherman Yamashita Tetsuji starts his days early. He begins by moving 18 cormorants from specially-made bamboo baskets where they spend the night into wire mesh cages where they can stretch their wings during the day. In the evening, he feeds the birds and returns them to the bamboo baskets that serve as their roost. Yamashita performs this ritual 365 days a year, without a single day of rest. Working with living creatures, and ensuring their health, is the cormorant fisherman’s destiny. 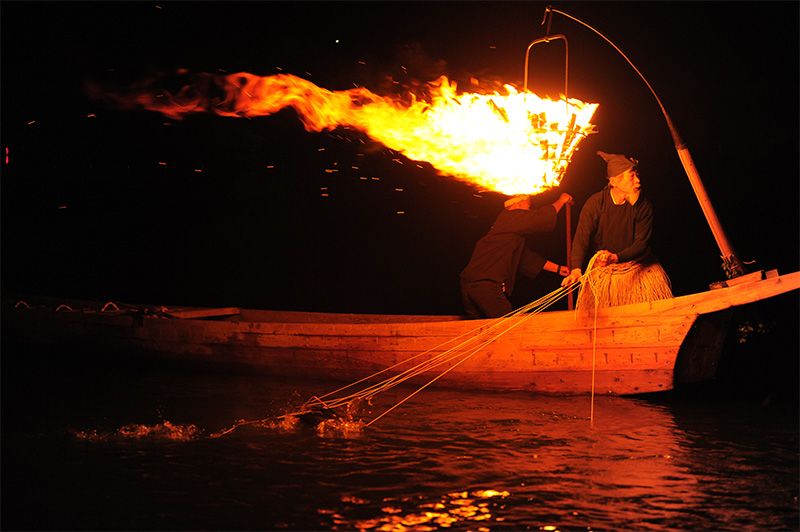 Ushō, or “cormorant master,” is the name for these fishermen. But Yamashita and the other Nagara River fishers are officially known as shikibushoku ushō, or “imperial cormorant masters.” In other words, they work for the Imperial Household Agency. Cormorant fishermen served those in power from before the Warring States period (1467–1568). After the 1868 Meiji Restoration, Gifu Prefecture lobbied for the preservation of the dying practice of cormorant fishing; in 1890, the Imperial Household Agency appointed the Nagara fishermen as imperial procurers of freshwater fish. Yamashita’s great-great-grandfather, Kyūhei, was named as the assistant chief of the fishermen at that time. Tetsuji, the nineteenth-generation family head, took up the imperial title in 1987 when his father, Zenpei, suddenly died.

Only six families in the city of Gifu City and three families in Seki, farther upstream on the Nagara, have this imperial title, passed down to this day in a hereditary system. Eight times a year, these cormorant fishermen offer sweetfish caught in an area normally closed to fishing to the imperial family. 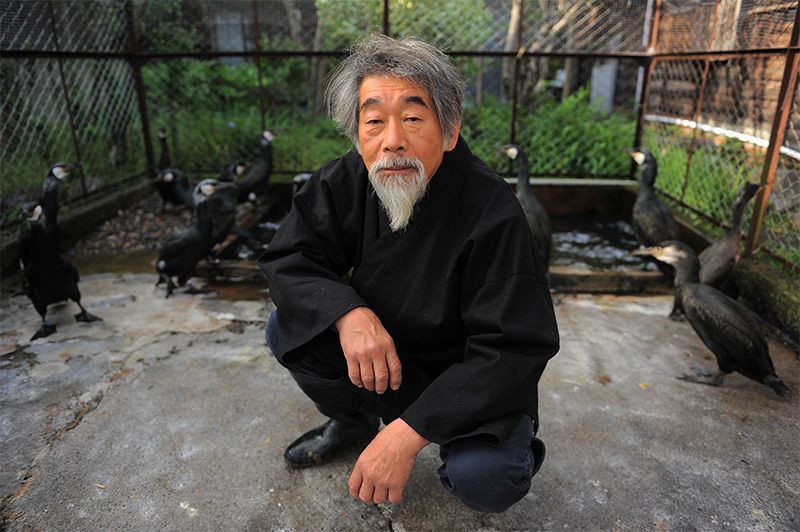 The fishermen pet their cormorants as they take them in and out of the baskets. “The birds become used to me as I interact with them this way every day,” Yamashita says. Petting the cormorants also allows fishermen to gauge a bird’s health and determine which bird to use for a night of fishing.

Why use cormorants in the first place? Someone with keen eyes is said to have the “eye of a cormorant, eye of a hawk” in Japanese, a phrase hinting at the visual talent that cormorants possess. In the water, they can also swim about three to four meters per second—even faster than the fish they pursue. Moreover, they have such a voracious appetite that they have caused damage to river fish stocks in every region of Japan, and above all become used to humans easily. These traits allowed cormorant fishing to exist.

“It takes about half a year for a cormorant to become used to humans, and another half year to train it for fishing,” says Yamashita. Fishermen slowly introduce fledglings into the rotation with older birds and teach them the fishing technique. Wild cormorants generally have a lifespan of seven to eight years—a decade at the most—but birds living with fishermen live even longer. Currently, the oldest bird kept on the Nagara is 25, and there are records of birds living over 30 years.

“We take care of the cormorants who come here until they die. They’re like family,” says Yamashita. His wife, Yuriko, laughs about her husband’s life revolving around his feathered charges. “Ever since we got married we’ve never been on a trip together, and even if he takes the children out he can’t travel far because he needs to return home by three in the afternoon to take care of the birds.”

A Premium Price for Cormorant-Caught Fish

A cormorant fisherman runs a one-man business and must front fees himself, first to buy the cormorants, then for clothing and a fishing boat, the pay for two boatmen, and even wood for the fire. Even imperial fishers only receive about ¥8,000 per month from the Imperial Household Agency. The majority of their income comes from the local tourism agency and the Gifu city government, which supports their industry as a tourist draw.

In the past, cormorant fishermen caught enough sweetfish to sell at Gifu’s fish market, but the catch is no longer that bountiful. Despite this, the sweetfish retains its inseparable relationship with cormorant fishing. An indigenous species to Japan, the ayu, as it is called in Japanese, was a precious enough catch to be subject to its own form of taxation from the medieval era. Cormorant fishing itself has survived down through the centuries because of its usefulness in landing this prized catch. 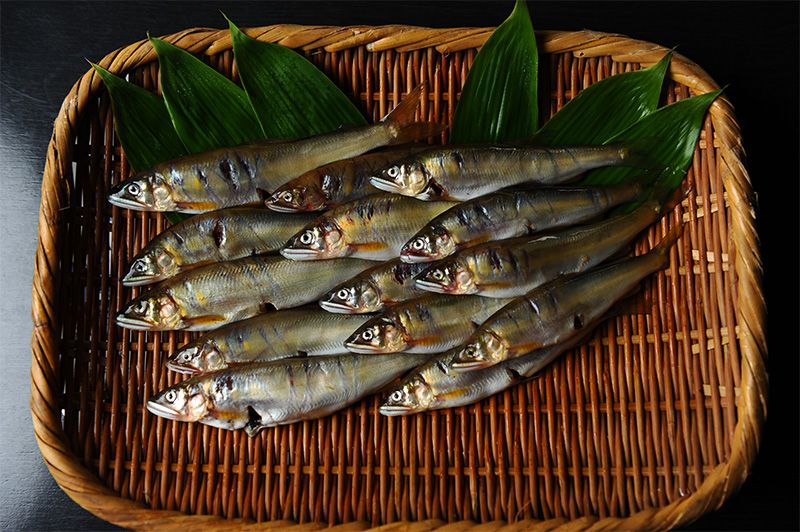 Beak marks are clearly evident on sweetfish caught by cormorants.

Cormorants leave unique scratches on the flank of sweetfish when they catch them in their mouths. These scratches are a sign that the fish was caught by a cormorant, and sweetfish with these lacerations are worth more. “Sweetfish caught in nets die slowly, but those caught by cormorants die instantly, sandwiched in the bird’s beak, and so are fresher,” says Yamashita. Cormorant fishing season runs from May 11 to October 15, the time of year when this anadromous fish returns to its Nagara River breeding grounds from the ocean. The rest of the year is the off-season for the cormorants.

A Challenging Life Together with the Birds

Until about 50 years ago, cormorant fishermen lived with cormorants on their boats and fed them fish caught from many different rivers during this off-season. They did this to avoid exhausting the fish in one single river and to avoid quarrels with other fishermen at the same time.

Today, cormorants’ food consists of the small fish that slip past the snare around their neck and into their stomach during fishing, along with treats of fish after the catch is over. The cormorants who did not participate in fishing are fed frozen Atka mackerel. In the off-season all birds now dine on this mackerel, freeing fishermen from the need to live on the river year-round. Even so, the birds need to be cared for every day, even in the off-season. In addition, with their off-time dedicated to repairing fishing boats and tackle, splitting the wood needed for the nightly fires, and making traditional clothing to wear during their fishing shows for tourists, the fishermen have no time to rest. 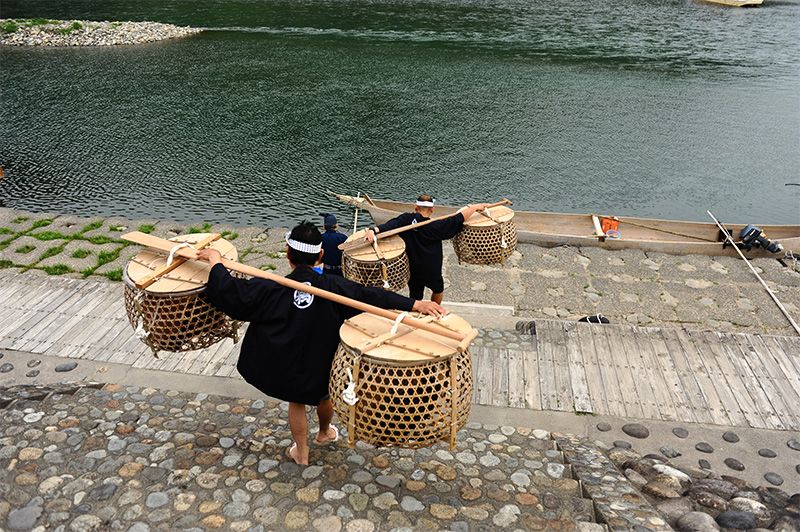 The fishermen take the baskets with the cormorants to their boats the nightly outing.

Being a cormorant fisherman, busy all year long caring for birds, cannot seem a very attractive profession to today’s youth. However, Takeshi, at 20 the youngest of Yamashita’s five children and his only son, seems to have decided to become a cormorant fisherman in the near future, even if he won’t admit it out loud. The other fishing families in the area say they are not worried about finding successors. 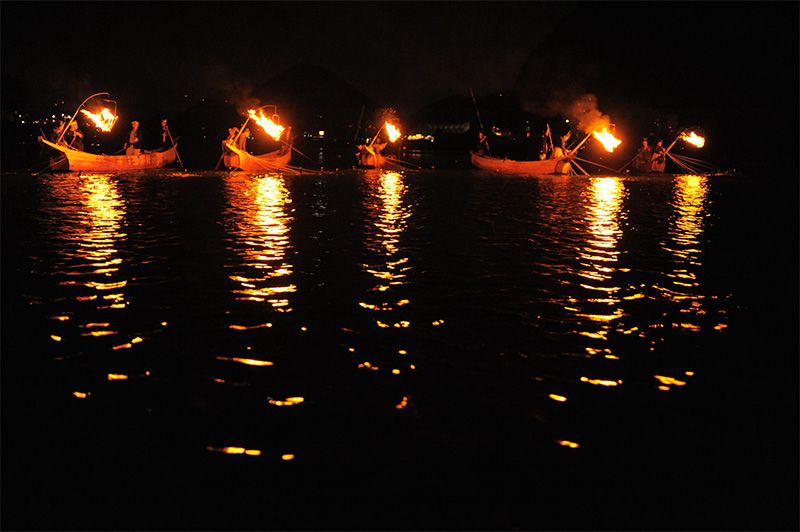 At the end of the fishing each night, all of the boats chase and catch sweetfish together, a routine known as sōgarami.

Yamashita says, “I’m proud to protect the long history and tradition of cormorant fishing through my work.” Happily, it looks like his pride will make it to the twentieth generation as well.

(Originally published in Japanese on June 12, 2017. All photos by Sawabe Katsuhito. Banner photo: Sparks from the fishing fire illuminate the Nagara River in a scene little changed in centuries.)