Shodō: The Art of Calligraphy

Culture Oct 18, 2016
Kanazawa Shōko was born with Down syndrome but is today one of Japan’s most acclaimed calligraphy artists. The love and warmth with which she was raised have helped to turn the tears of her childhood into the applause and adulation of fans worldwide. 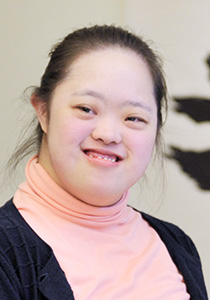 Shoka (calligraphy artist), also known professionally as Shōran. Born in Tokyo in 1985. Began studying calligraphy with her mother at age 5 and held her first solo exhibition, “The World of Calligraphy,” in 2005. Has since exhibited her works at such renowned temples throughout Japan as Kenchōji in Kamakura, Kenninji in Kyoto, and Tōdaiji in Nara. Held her first overseas show in 2015 in New York and had solo exhibitions in the Czech cities of Plzeň and Prague later that year. Is the co-author, with her mother, of several books, including Tamashii no sho (Calligraphy of the Soul) and Umi no uta, yama no koe (Songs of the Sea, Voices of the Mountain).

On March 20, 2015, Kanazawa Shōko made an inspirational presentation at the Fourth World Down Syndrome Day Conference, held at the United Nations Headquarters in New York, concluding her remarks with the words, “May my calligraphy cheer people up and give them happiness and leave a warm impression in their hearts.”

Kanazawa Shōko was born in June 1985 in Tokyo. Her mother, Yasuko—who was 42 at the time—was ecstatic with the birth of her first child. Her joy, though, soon turned to despair when her doctor informed her that Shōko had Down syndrome. One day, as she was breastfeeding Shōko in tears, her young daughter reached out her tiny hand and wiped Yasuko’s tears away, smiling. “I was touched by Shōko’s will to live, her kindness, and her wisdom. She was the one who gave me the strength to live.” Since then, Yasuko and Shōko have been tied by the strongest of mother-daughter bonds.

To help Shōko make friends, Yasuko—who had studied calligraphy for many years—decided to open a classroom at home for children in the neighborhood. Although she was just five years old, Shōko was the only one of the four children in the class who was able to hold the brush properly. Yasuko felt then that Shōko had an innate talent for calligraphy.

Shōko enrolled in a neighborhood elementary school, made many friends, and was quite happy. In fourth grade, however, her teacher advised her to transfer to a school with special classes for the handicapped. She loved going to school, so she was heartbroken and started skipping classes. Hoping that it would help support her daughter emotionally, Yasuko taught Shōko to write the Heart Sutra containing the essence of Buddhist teachings in 276 characters. The sutra contains many difficult kanji, though, and is difficult for any 10-year-old to write, let alone for someone with a learning disability. But Shōko took to the task day and night, often in tears when her mother would scold her for not getting it right. The tears would fall on the paper, which is why the work is now called the “Tears Heart Sutra.” 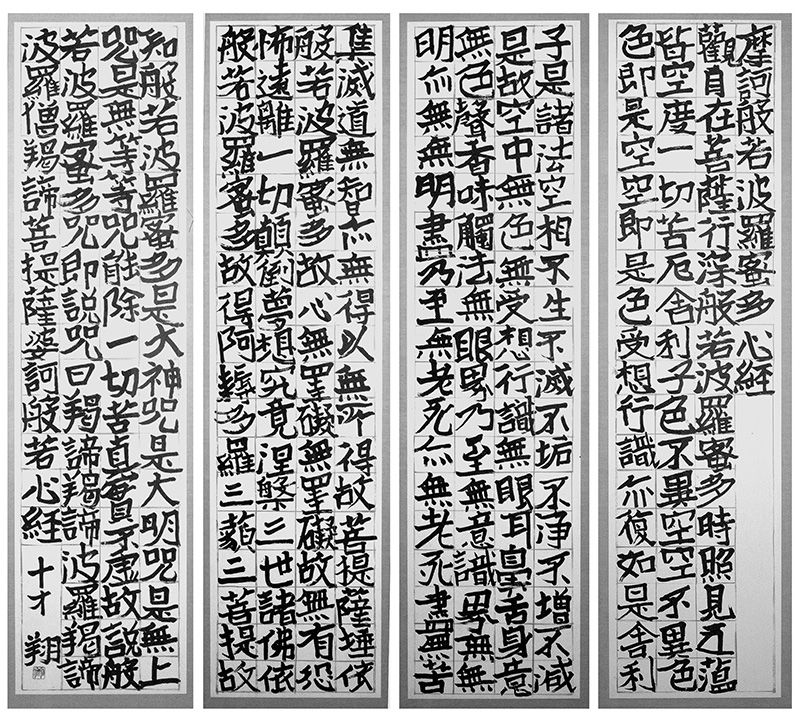 A Gift from Heaven

Shōko immersed herself in calligraphy, making great strides in the art. Inscribing even complex letters in the proper stroke order became second nature. These efforts led, six years later in 2001, to her being awarded the top prize at an exhibition for student calligraphers throughout Japan.

The years until this breakthrough were punctuated by tragedy, though. When Shōko was 14 years old, her father, Hiroshi, passed away suddenly of a heart attack at age 52. The deep love he had showered on his daughter, though, would continue to shine a path for Shōko. He had often talked of holding a solo exhibition of her works when she turned 20; Yasuko remembered those words as she was wondering how she should provide for Shōko as an adult, and decided to organize an exhibition of Shōko’s works.

The many visitors who came to The World of Calligraphy exhibition, held in December 2005 at a Ginza art gallery, were moved to tears. News of the show was carried on TV and in newspapers and soon spread over the Internet. Shōko became an overnight sensation as a genius shoka (calligrapher) with Down syndrome. It was like a heaven-sent gift from her loving father. 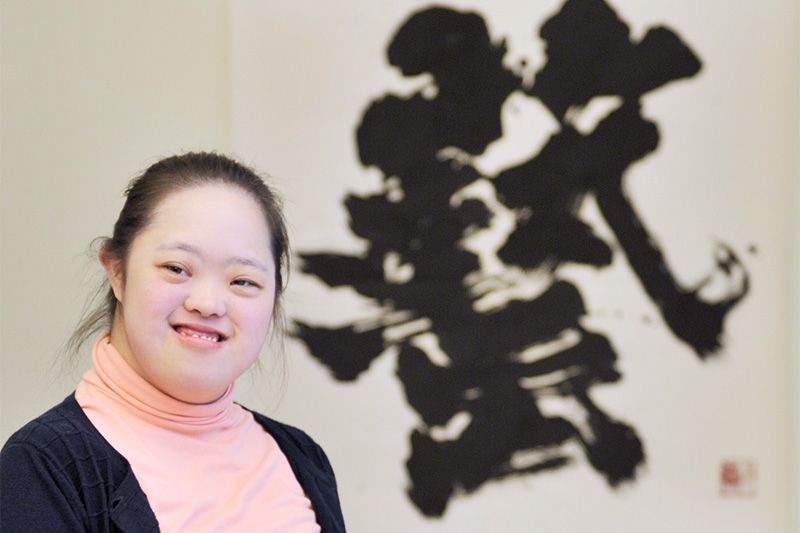 Starting Life on Her Own

Shōko has since catapulted to fame through a remarkable series of developments. Accompanied by her mother, she has performed in front of large crowds at public calligraphy events held at such renowned temples and shrines as Kenchōji in Kamakura, Tōdaiji in Nara, Kenninji in Kyoto, Chūsonji in Iwate, and Itsukushima Shrine in Hiroshima, as well as at art and literary museums and other cultural facilities around the country. In 2011, she was commissioned to write the title logo for NHK’s Taiga drama historical fiction series about Taira no Kiyomori. In 2013 she created a huge 5-meter-by-5-meter work of the character 夢 (yume, dream) during the opening ceremony of the National Sports Festival of Japan held in Tokyo. And she was showered with acclaim for her moving speech at the United Nations on World Down Syndrome Day.

Last fall, after turning 30, Shōko moved out of her mother’s house and began living on her own. Until then, she had no interest in money, but now she does her own shopping for groceries in the neighborhood, clenching 1,000-yen notes in her hand. Her neighbors regard her as an angel who brings smiles to the faces of everyone she meets. She asks for little in return, preparing her own meals and eating alone.

Although proud and happy about her daughter’s feats, Yasuko sometimes wishes they could share more meals together. After all, Yasuko had never imagined that someone with Down syndrome like Shōko would ever be able to support herself and live independently. But Shōko has become a beacon of hope for others with Down syndrome and their families around the world. The secret to Shōko’s achievement, of course, is the strength and inspiration she draws from her calligraphy. 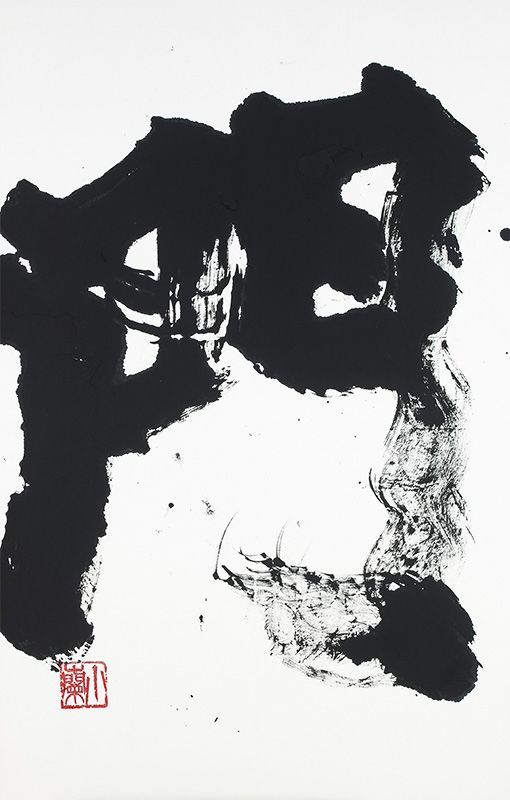 The kanji Shōko normally writes are in the kaisho regular script, many of whose lines are straight, and where each stroke is clearly defined. Kaisho is considered to have matured stylistically during the Tang dynasty (618–907). While I am not an expert on the subject, Shōko’s style reminds me of the works of Yan Zhenqing (709–785), one of China’s greatest calligraphers and a master of this script. His works are characterized by strength and boldness, yet suggest a vivaciousness of spirit. Shōko’s calligraphy contains all these features but also has a vibrancy and immediacy so that the letters seem to move with the rhythm and flutter of life, as if they have a life of their own. This, no doubt, is what has mesmerized audiences and moved them to tears. Shōko’s technique is grounded solidly in tradition, yet she is not constricted by it; it is as if, with artless innocence, she simply allows the brush to glide where it wants to go. “She never thinks about trying to write well or worries about fitting all the characters onto the paper,” Yasuko says. “She just wants to make people happy.”

More recently, Shōko has been venturing freely into scripts other than kaisho, such as the semi-cursive gyōsho and cursive sōsho scripts, as well as the Japanese hiragana syllabary. Her repertory has also expanded; in addition to single- and compound-kanji works, she now draws on Buddhist sutras, classical Chinese poetry, traditional waka and haiku poems of Japan, and even modern verse. What she creates using ink and brush are not faithful reproductions of centuries-old masterpieces. They are expressions of her vivacious personality and are highly esteemed works of contemporary art that have struck a deep chord in people. 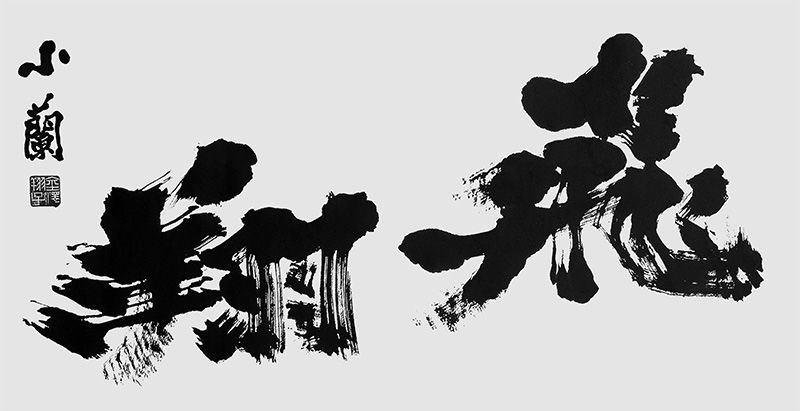 Shōko has thus far held solo exhibitions in New York and the Czech Republic, but foreign audiences will henceforth have greater opportunities to see the works firsthand. She plans to have a show in Singapore in October 2016, to be followed by exhibits in Dubai in April and Saint Petersburg in May 2017. Shōko’s fame will surely spread beyond the shores of a country on the eastern edge of the Eurasian continent and take flight—just as the shō (翔) in her name means to spread one’s wings and fly in to the sky.

(Originally published in Japanese on September 26, 2016. Banner photo: Kanazawa Shōko smiles after finishing writing 平和の祈り [Heiwa no inori, Prayer for Peace] at a calligraphy performance in front of the Yamagata Museum of Art on August 13, 2016. © Yamagata Shimbun.)