The Global Allure of Karate

Sports Culture Jan 2, 2017
Karate will make its Olympic debut at the 2020 Tokyo Games. At present, around 100 million people on five continents and 192 countries practice karate, making it truly a global sport. Karate developed out of a weaponless martial art, and today it remains a means of fostering self-reliance and mental strength.

A Martial Art Born in Okinawa

Karate is a martial art that emerged in the fourteenth century on the island of Okinawa (then known as the Ryūkyū Kingdom). During the reign of Shō Shin and later under the rule of the Satsuma Domain, the island’s residents were not allowed to bear arms.(*1) It is said that these conditions led to a fusion of the martial arts indigenous to Okinawa and those assimilated through trade relations with China. The new system was characterized by toshu-kūken, which means fighting with empty hands.

The techniques of this martial art form were passed down from master to follower over the centuries, but in the first decade of the twentieth century karate began to be taught in schools as karate instructors, recognizing its value as a form of physical education, began promoting its instruction to schoolchildren.

Karate is still highly valued at schools in Japan today. It is considered a safe martial art whose basic moves do not involve striking an opponent, and it promotes bodily balance without requiring any special equipment or facilities.

In 1922, a karate instructor from Okinawa named Funakoshi Gichin demonstrated the techniques of karate in Tokyo at the First Physical Education Exhibition, hosted by the Ministry of Education. This was the first time for karate to be presented to people on the mainland of Japan, leading to its rapid proliferation. Around this time, instructors from various schools of karate opened dōjō (training centers) outside of Okinawa. University students came to form the core of karateka (practitioners) on the mainland. In 1924, Keio University opened its karate club, followed in 1926 by clubs at Tokyo Imperial University (now the University of Tokyo) and other universities.

Interest grew in formulating a set of accepted rules so that competitions could be held. This resulted in the First All Japan University Karate Tournament held in Tokyo in 1957. The rules that were created for karate, centering on the efforts of university students, still form the basis for the competitions that are held today.

At around the same time, attempts were made to create a single karate organization to oversee all the various karate schools. The result was the formation of the Japan Karatedo Federation (JKF) in 1964. This was followed in 1970 by the establishment in Japan of the World Karate Federation (WKF), an international organization that unified the martial art on a global level. The WKF sponsored the first Karate World Championships at the Budokan that year.

In 2016, the sport was chosen for inclusion in the 2020 Tokyo Olympic Games. The official decision was made to include men’s and women’s karate in eight different weight classes in the Olympics.

What Are the Different Karate Schools?

Karate has a variety of ryūha, which refers to the different schools or styles of karate. Each ryūha is a separate group that has passed down its own particular techniques. What the ryūha have in common, despite their differences, is the weaponless toshu-kūken approach, centering on thrusting and kicking, as well as an emphasis on personal development through the practice of the martial art.

Many of the karate masters who created their own ryūha have left behind maxims and sayings that underscore the importance of cultivating not only one’s body and techniques but also one’s spirit. Funakoshi Gichin, for example, said that, “There is no first strike in karate.” That is to say, karate techniques are not aimed at instigating combat. Rather, one should strive to protect oneself and, even more than that, cultivate oneself to the point where situations can be resolved without recourse to fighting.

Another characteristic of karate is the emphasis on showing respect for others, such as by kneeling in the seiza position at the beginning and end of practice in a moment of silence and then bowing. Many aspects of practice involve bowing, such as to one’s teacher as well as to fellow students in the same karate dōjō. Although karate originated as a means of self-defense, today it has established itself as a path to moral cultivation and self-discipline.

Below are the four representative ryūha among the groups affiliated with the JKF.

There is also a full-contact karate group that is a partner of the JKF.

Kata, which means “form,” refers to the seamless performance of a certain sequence of the defensive and offensive techniques that have been developed over the course of karate’s history. The WKF’s list of officially recognized kata techniques includes 91 different moves. Each of the kata movements, which involve thrusting or kicking for attack or defense, were created with an opponent in mind. In this sense, it is different from dancing and other performing arts.

Kumite, meanwhile, which literally means “grappling hands,” involves training against an actual adversary, with techniques limited to thrusting, kicking, and striking. The main characteristic of kumite is that one should not injure the opponent. All of the attacking techniques must be kept under control. Anyone who does end up injuring an opponent is penalized. 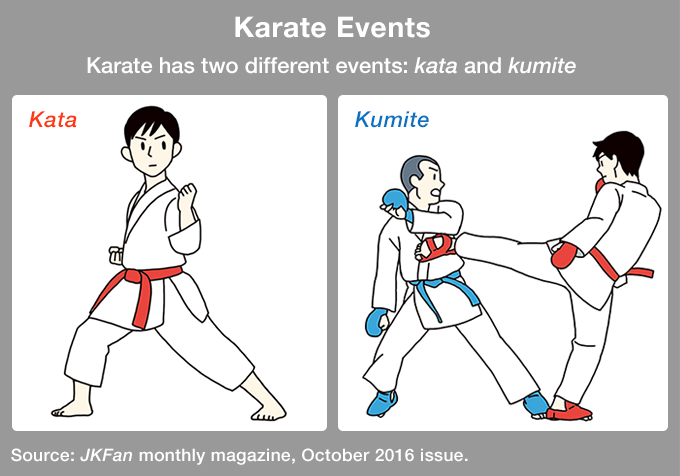 At a tournament, both the kata and kumite competitors are distinguished by wearing either a red or blue belt.For kata, the demonstration, or enbu, begins with the competitor in the red belt, followed by the one in blue. The winner is determined by the majority decision among five judges, who hold up a red or blue flag to indicate their choice. In evaluating the kata, the judges consider the correctness of the moves performed, such as whether they properly embody the meaning of the particular technique, as well as speed, power, stance, and other aspects.In the case of kumite, there is a referee and a match supervisor, as well as four judges holding a red and a blue flag. The length of the bouts are three minutes for men and two minutes for women, and judges indicate that a valid technique has been employed by holding up a flag. If two or more judges hold up a flag, one to three points are awarded, in accordance with the difficulty of the technique. A winner is declared when a competitor receives eight points more than the opponent or has more points at the end of the bout. In the case of a draw, the referee and the four judges together determine the winner through a majority decision. 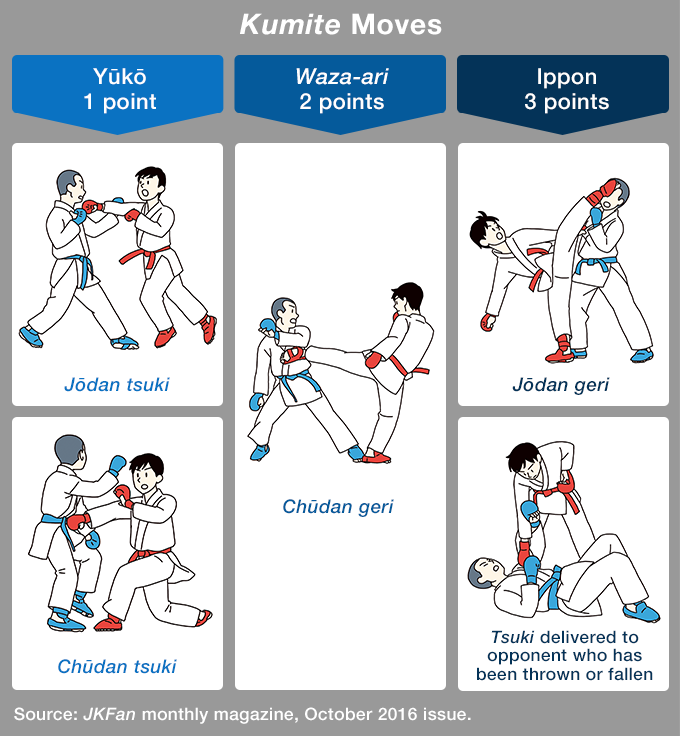 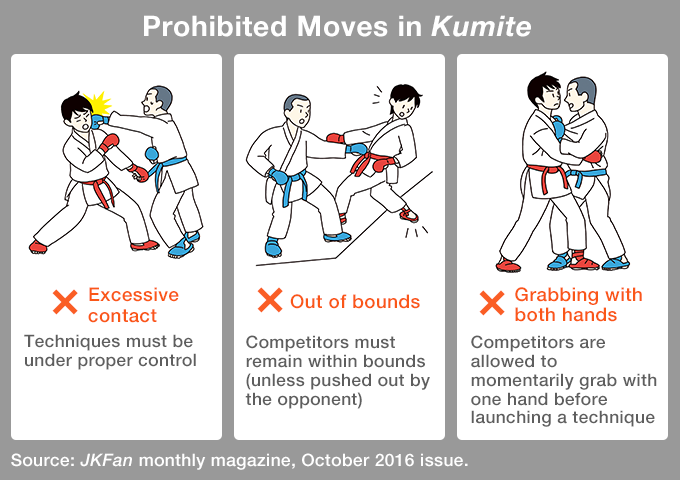 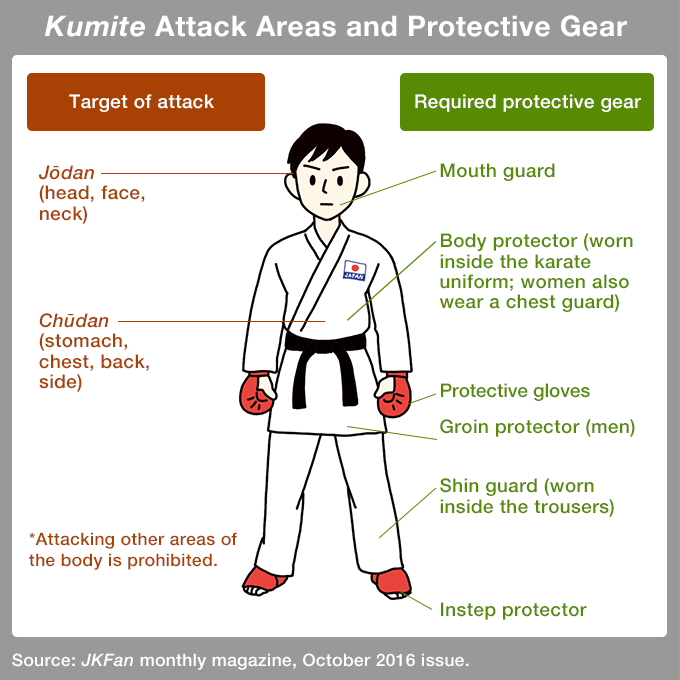 Karate Champions Outside of Japan

The WKF has established an international ranking system and also holds around 10 tournaments every year, including the Junior and Senior Karate World Championships. On top of this, karate is included as an event at the World Games, SportsAccord, the World Combat Games, various national competitions, and the World University Championships.

At such competitions, the medal winners hail from a wide range of countries. The competitions feature matches between competitors from karate powerhouse nations, which have been striving to raise their competitive level.

Japan has produced many champions over the years, but in 2014, the winning team for the kumite event at the Karate World Championships was from Iran, which is now Japan’s top rival. And in 2008, Vietnam produced a world champion in the kata event. Chinese Taipei, Hong Kong, and Saudi Arabia are also quickly becoming major powers in karate. 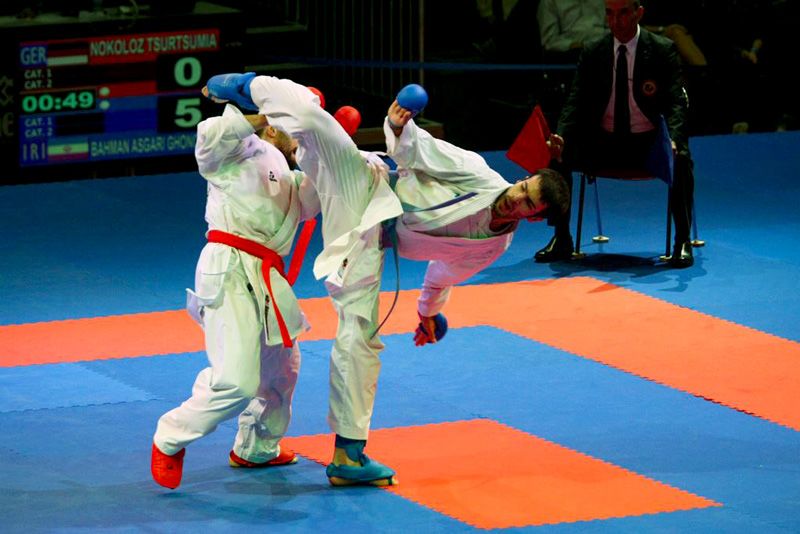 A competitor (right) from Iran, now a major karate powerhouse. 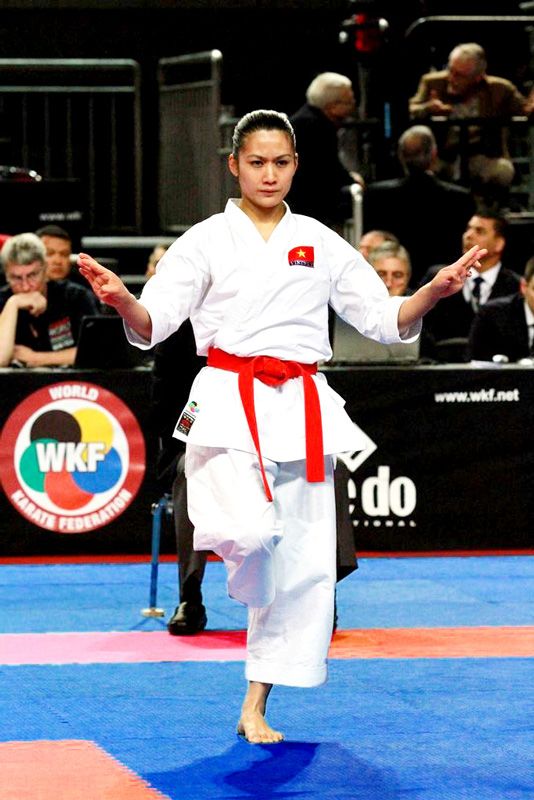 Nguyen Hoang Ngan of Vietnam, the gold medalist at the 2008 World Championships.

The strongest European countries at the moment are France, Spain, Germany, and Italy, as well as Turkey and Azerbaijan. 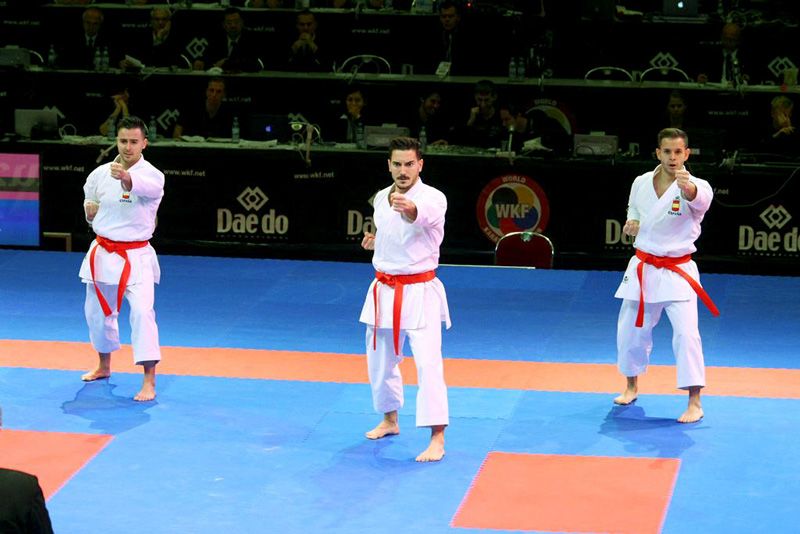 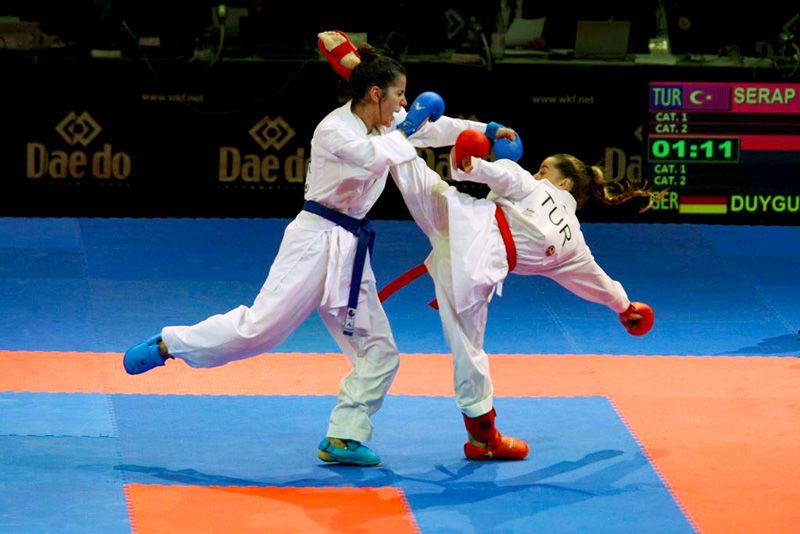 Egypt is the leading karate nation in Africa, placing second in the medal count at the 2014 World Championships. The level of both men and women are high in Egypt, where karate has become a popular sport. Algeria and Morocco are also two emerging powers that have been actively developing their karateka. 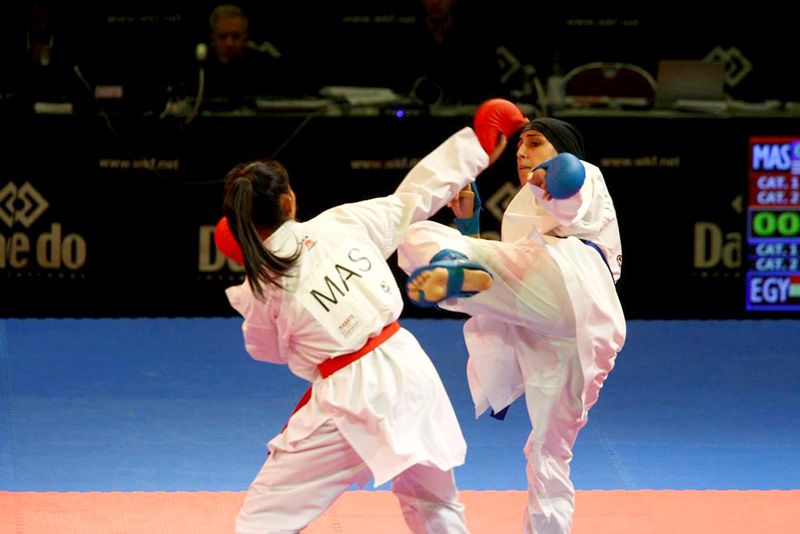 An Egyptian competitor (right) in a bout. Karateka from Egypt have been focusing on kata as well in recent years.

Turning to the Americas, Brazil has produced world champion in the kumite event, while Venezuela and Peru are strong in the kata category. The United States had many karetaka from Hawaii during the first decade of the new century, but other states in the country have also been fostering competitors. 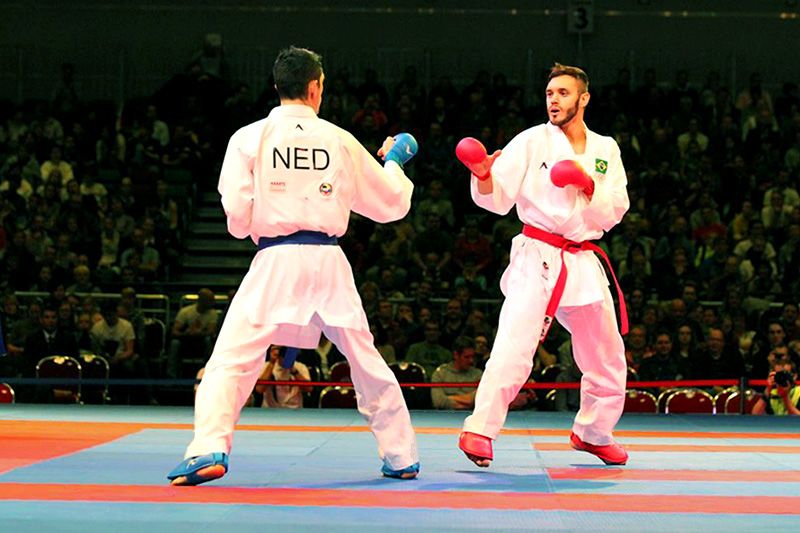 In Oceania, there are not many countries in the WKF, but Australia produced a world champion in 2010 and New Zealand is a rising karate power.

At the 2020 Olympics, karate will be limited to eight weight classes and just 80 karateka. In other words, the event will be a forum for the world’s top competitors.

For those not competing at that top level, karate is a pastime that can be enjoyed throughout their lives and enjoyed for a variety of reasons, whether to improve health and appearance or for self-cultivation. This diversity of karate, as both a sport and a martial art, as well as an aspect of Japanese culture, will be on international display at the Tokyo Games in 2020.

(Originally published in Japanese on December 1, 2016. Illustrations and banner image by Izuka Tsuyoshi.)

(*1) ^ There are varying theories regarding the origins and development of karate, and a dearth of historical materials makes it difficult to verify any single one. The reign of Shō Shin lasted for 50 years until 1527, and the Ryūkyū Kingdom came under the rule of the Satsuma Domain in 1609.