Sakamoto Ryōma: The Samurai Who Dreamed of a Modern Japan

Culture Aug 1, 2017
Sakamoto Ryōma is one of Japan’s favorite historical figures and was a central mover in efforts to overthrow the shogunate 150 years ago. He was killed at the age of 31, however, and so did not live to see his efforts to modernize the country bear fruit. In this article we look at the life and enduring popular appeal of a low-ranking samurai who became influential at the highest level.

A Grounding in Swordsmanship

The short, dramatic life of Sakamoto Ryōma (1836–67) continues to capture the hearts and imaginations of the Japanese people. In a 2008 survey of popular historical figures conducted by NHK Broadcasting Culture Research Institute the young samurai ranked third behind military leaders Oda Nobunaga (1534–82) and Tokugawa Ieyasu (1543–1616). Although Ryōma often worked behind the scenes, his dreams of a modernized Japan placed him at the center of the movement to overthrow the shogunate that Tokugawa established more than 250 years earlier.

Ryōma was born on January 3, 1836, the second son of a low-ranking gōshi or “country samurai” in the remote province of Tosa (now Kōchi Prefecture) on the island of Shikoku. His family was an established branch of the wealthy Saitani clan that controlled a mercantile fortune from brewing and fabric, and so were well off despite the low stipend they received as gōshi. 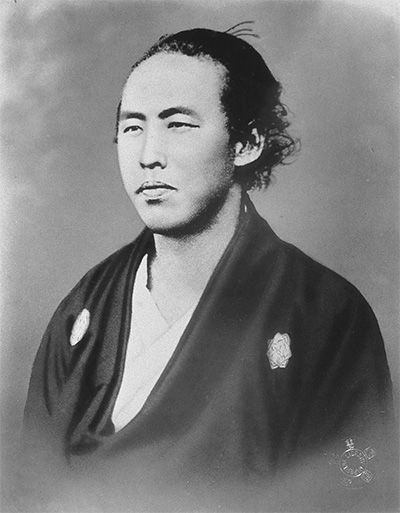 At over 170 centimeters, Ryōma was tall compared with other Japanese of his time. (Courtesy of the National Diet Library)

Ryōma began to learn swordsmanship at the age of 14 under the tutelage of Hineno Benji, a local samurai. Just a few years after, in the spring of 1853, he set off for the bustling city of Edo (now Tokyo) to refine his skills further. There, he trained under the swordsman Chiba Sadakichi in the Hokushin-ittō school of the discipline. This was the momentous year that Commodore Matthew Perry and the “black ships” of the US Navy steamed into Edo Bay demanding that the shogunate open up to foreign trade.

In 1854, Ryōma returned to Tosa, but the prospect of further study lured him back to Edo in 1856. He is said to have been appointed head of the Chiba Dōjō and initiated into all of the school’s teachings. 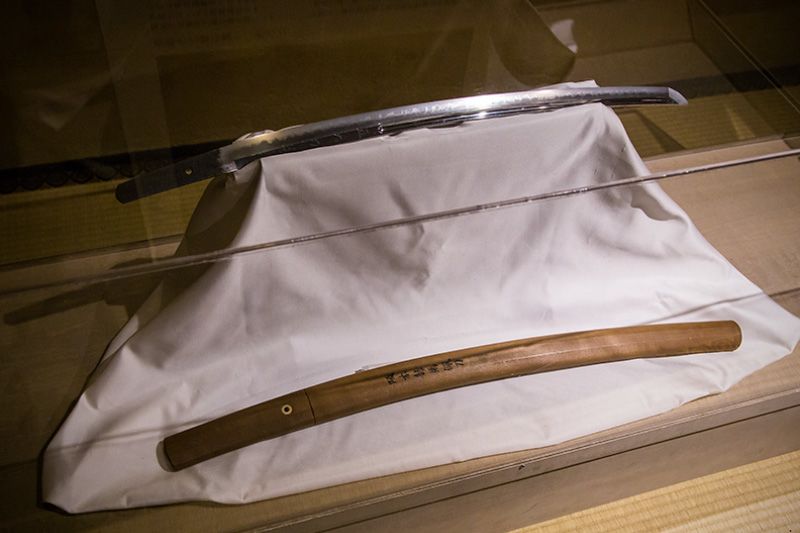 Ryōma’s favorite short sword went on display for the first time at a recent Tokyo exhibition.

“Revere the Emperor, Expel the Barbarians”

As anti-shogunate sentiment rose across Japan, in 1861 the gōshi Takechi Zuizan (1829–65) established an organization of imperial loyalists in Tosa dedicated to the principles of sonnō jōi (revere the emperor, expel the barbarians). The goal was to overthrow the ineffectual shogunate, replace it with a strong state under imperial rule, and repel foreign intruders. Ryōma was in Tosa at the time and joined the movement initially, but left the following year, shortly before the group assassinated the local leader Yoshida Tōyō (1816–62).

Once again in Edo, Ryōma made contact with Takasugi Shinsaku (1839–67) and other leaders of the Chōshū domain (now Yamaguchi Prefecture), which was a hotbed of imperial loyalists. 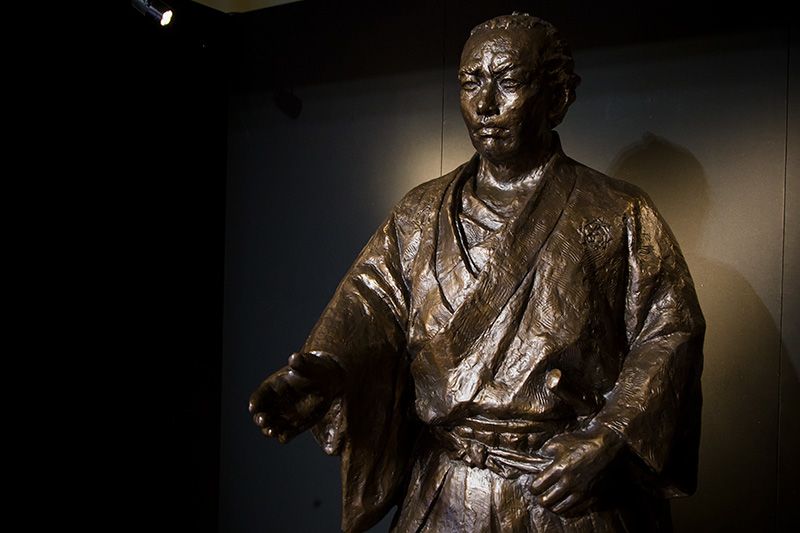 A statue at the Sakamoto Ryōma Memorial Museum in Kōchi Prefecture.

In a definitive episode, Ryōma planned to assassinate Katsu Kaishū (1823–99), a high-ranking shogunate official, but wound up working for him after the two met. Katsu, who captained the first Japanese steamer to cross the Pacific, influenced Ryōma into seeing the necessity for Japan to learn from other countries rather than simply take a hostile, hardline stance. Recognizing the young man’s talents, he persuaded Ryōma to use his abilities to help build up Japan’s fledgling navy.

In 1863, Katsu received permission from the shogunate to establish the Kobe Naval Training Center and made Ryōma head of the academy for teaching young officers. 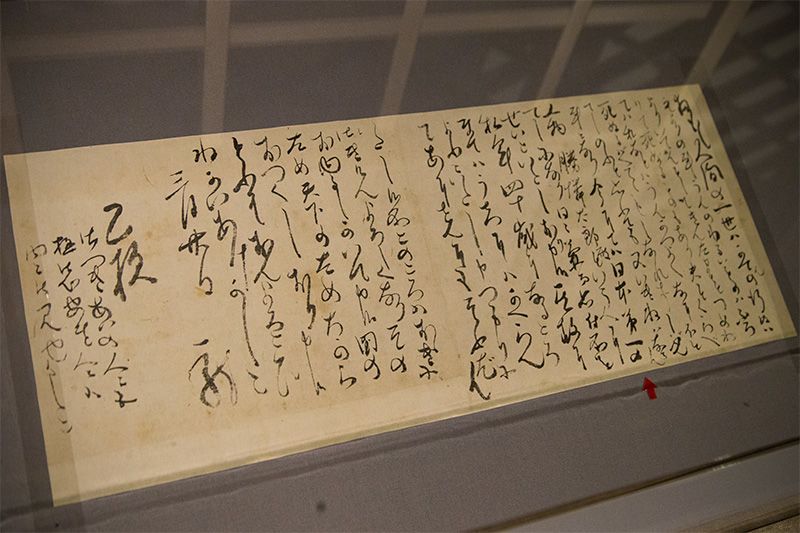 A copy of the first letter Ryōma sent to his sister Otome after illegally leaving his domain in 1862. The red arrow shows where he writes about becoming a disciple to “the most important person in Japan” Katsu Kaishū.

Later that year, the Chōshū domain defied the shogunate by bombarding foreign ships off the coast of Shimonoseki. Upon hearing that the damaged vessels were repaired at Edo before returning to retaliate against Chōshū, Ryōma felt the country was approaching crisis point. “I want to wash Japan clean,” he famously wrote in a letter to his sister Otome.

The increasingly beleaguered shogunate grew suspicious of Katsu’s independent spirit, and in 1864 it stripped him of his position as commissioner of warships and recalled him to Edo. The following year it shut down the Kobe Naval Training Center. 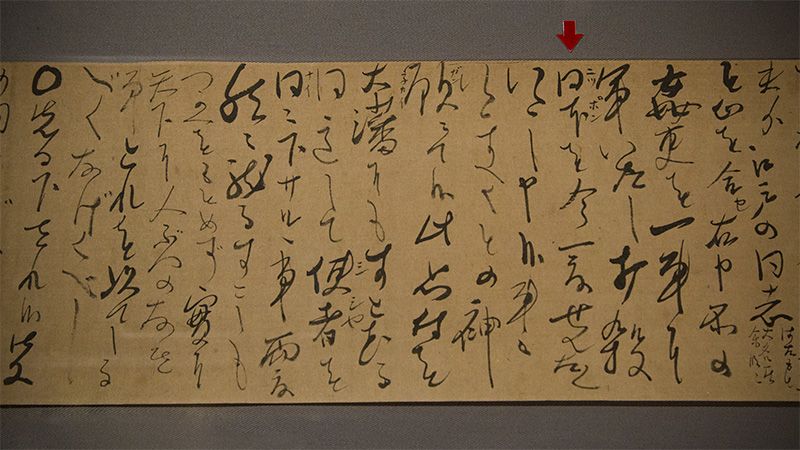 A copy of a letter to Otome. The red arrow indicates where he wrote “I want to wash Japan clean.”

Working Together to Bring Down the Shogunate

Ryōma’s greatest achievement was brokering an alliance between the two powerful domains of Satsuma (now Kagoshima Prefecture) and Chōshū in 1866.

Initially at odds, Chōshū’s radical anti-shogunate attitude contrasted with Satsuma’s desire for national unity through alliance between the shogunate and influential domains.

As the shogunate became more dictatorial, though, Satsuma leaders Ōkubo Toshimichi (1830–78) and Saigō Takamori (1828–77) shifted their stance toward opposition. In 1865, the shogunate ordered domains to support its forces in an expedition against Chōshū, but Satsuma refused to comply. Ryōma conveyed the decision to Chōshū leaders, creating the opportunity for the two sides to join hands.

With Ryōma in attendance, the two domains entered into a formal alliance in 1866, agreeing to bring the nation together even if it meant direct confrontation with the shogunate. The forming of the alliance greatly increased the existential threat the shogunate faced.

Chōshū samurai Kido Takayoshi (1833–1877) compiled the main points of the secret, oral agreement into six clauses, which he sent in a letter to Ryōma for affirmation. Upon receiving the message, Ryōma wrote on the reverse side that he entirely agreed. 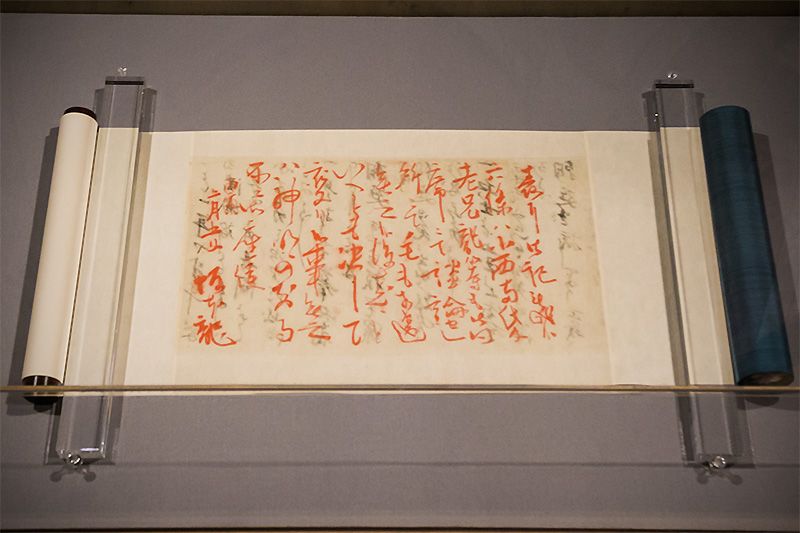 Ryōma’s writing in vermilion ink on the back of the Satsuma-Chōshū alliance agreement (copy).

A Plan for a Modern Japan

Alongside his political activities, Ryōma continued his naval work and tried his hand at trade. In 1865, he founded pioneering company Kameyama Shachū in Nagasaki, a commercial endeavor that also supported the alliance by, for example, purchasing weapons and ships in Satsuma’s name to supply to Chōshū.

In 1866, the shogunate sent its punitive expedition to Chōshū. Members of the Kameyama company were on board the warship Union—procured for Chōshū from a British company—and took part in a battle off Shimonoseki. This was Ryōma’s only experience of military combat. 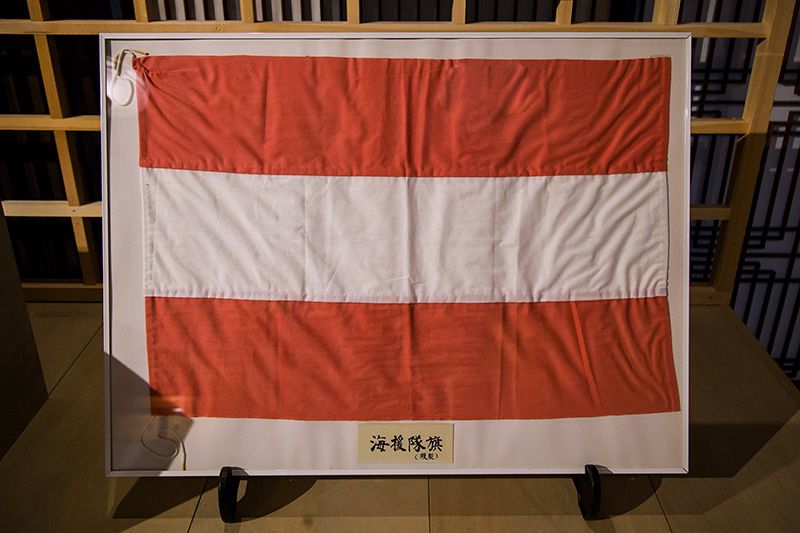 A replica of the Kameyama Shachū flag. The company later became Kaientai, affiliated to the Tosa domain.

Another of Ryōma’s achievements was his eight-point plan for modernizing Japan that, among other aspects, called for the shogunate to cede power back to the emperor and the establishment of a national assembly. He presented the plan to a Tosa leader Gotō Shōjirō (1838–97) during an 1867 sea journey.

Impressed, Gotō used his influence to formulate a petition from Tosa to Shōgun Tokugawa Yoshinobu (1837–1913), urging him to restore power to the emperor. By this time the shogunate was much weakened, and Yoshinobu stepped down on November 9, 1867. Ryōma’s eight-point plan went on to influence principles for modernization in the Meiji era (1868–1912). 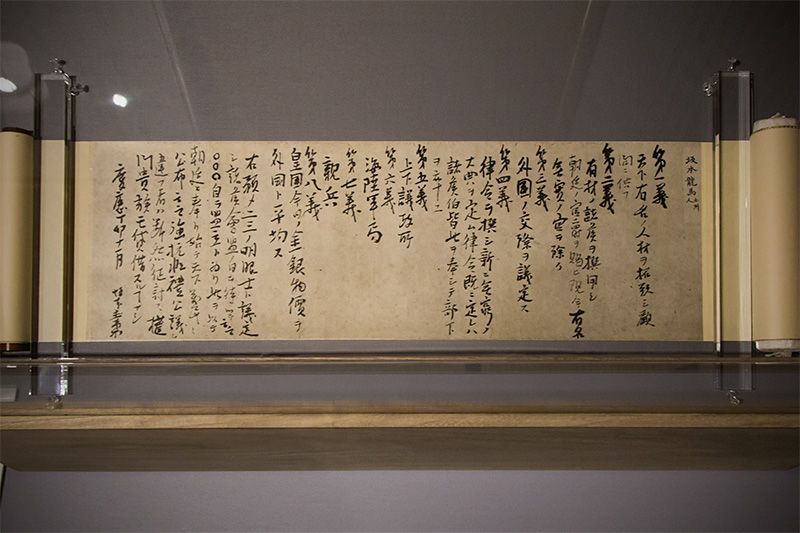 One month after the restoration of imperial power, Ryōma on December 10, 1867, was assassinated while at a soy sauce shop in Kyoto where he often stayed. He was just 31. There are countless theories about who ordered and perpetrated the deed, but the Mimawarigumi, a police force still loyal to the shogunate, is considered most likely to have conducted the killing.

Shortly after the incident, the new imperial army, made largely with troops from Satsuma, Chōshū, and Tosa, clashed with supporters of the former shogunate at the Battle of Toba–Fushimi in January 1868. This set off the Boshin War, which ended in imperial victory in 1869. Subsequently, the Meiji government set to work building a new state. 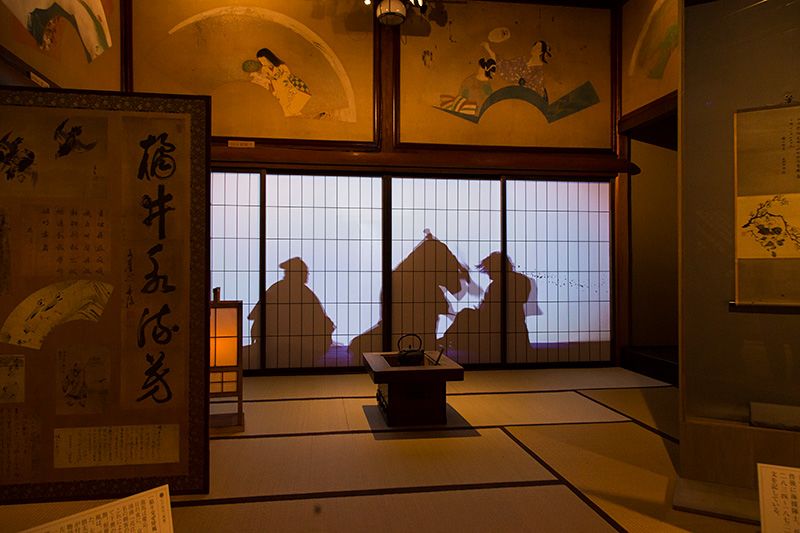 A Hero of Fiction

After his death, Ryōma’s popularity steadily grew, helped along in part by the extensive correspondence he left behind. While resolutely expressing radical views on the world and the state, the letters were also filled with interests beyond politics, and would sometimes include descriptive illustrations. Such lively interactions enhanced his appeal among the populace by helping people to see him not just as an influential historical figure but relate to him as an individual. Ryōma’s political and economic achievements along with the more personal touches found in his letters have formed the basis for many books, films, and television dramas. 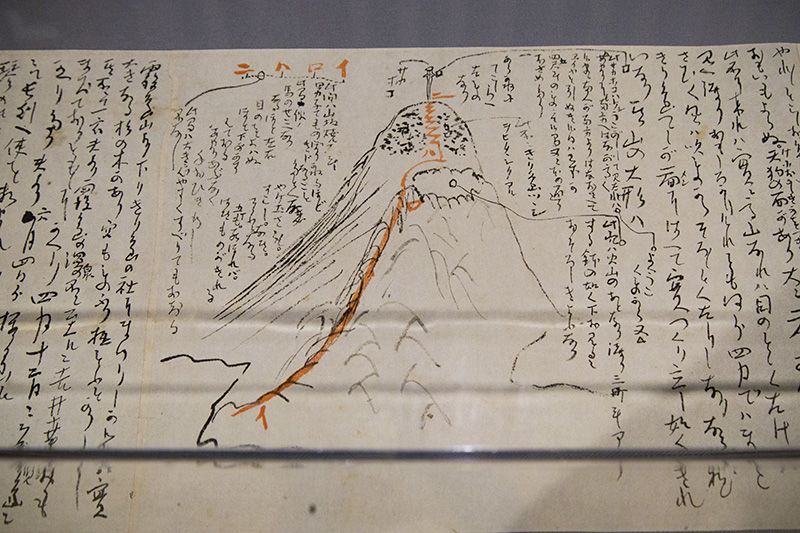 A letter from Ryōma to his sister Otome describes part of his honeymoon—said to be Japan’s first—with his wife Ryū. It includes notes on the illustration, almost like a modern guidebook.

The first film of Ryōma’s life appeared in 1911. Later in the century, the historical novelist Shiba Ryōtarō (1923–1996) wrote the immense Ryōma ga yuku (Ryōma Goes His Way) that was serialized in the Sankei Shimbun from 1962 to 1966. The work has been adapted to film and television several times and has shaped Ryōma’s popular image. The 1961 academic work Sakamoto Ryōma and the Meiji Restoration by American scholar Marius Jansen introduced him to English-speaking readers, and is also said to have influenced Shiba’s novel.

Visitors to Kyoto can find various sights connected to Ryōma around the city, including his grave at Ryōzen Gokoku Shrine. The Sakamoto Ryōma Memorial Museum in his hometown of Kōchi is currently closed for refurbishment, but will reopen in the spring of 2018. 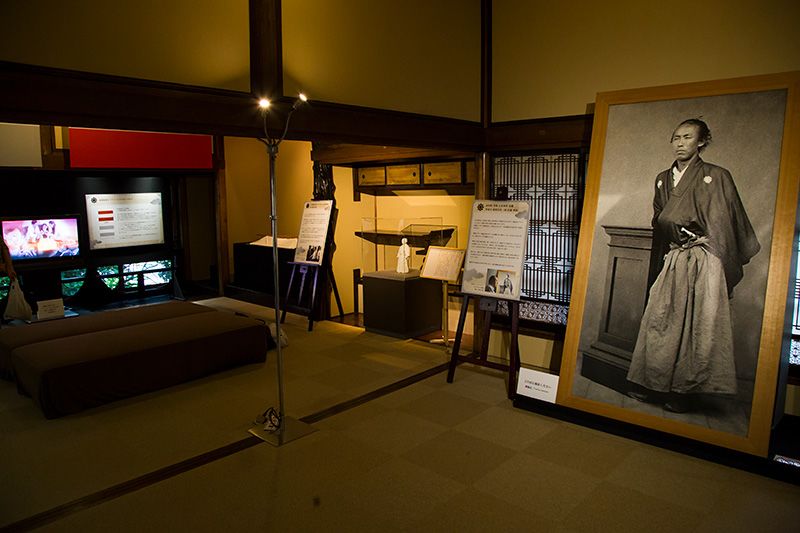 The life-sized picture to the right, provided by exhibition sponsor Softbank, usually hangs on the office wall of the company’s chief executive officer Son Masayoshi, who is a big Ryōma fan.