Tools for the Japanese Table

Bjorn Heiberg, the “Savior of the Japanese Knife”

Culture Jul 5, 2017
Razor-sharp Japanese wabōchō, chef’s knives created by skilled master craftsmen, are essential to the preparation of washoku. Bjorn Heiberg, who runs knife specialty stores in Osaka and Tokyo, fell in love with wabōchō after coming to Japan, and is spreading the good word about these remarkable knives to the rest of the world.

The Cut that Keeps Umami In

Wabōchō, or fine Japanese cooking knives, are all about the cut. The best way to explain their quality is to show just what they’re capable of. In the photos below, the carrot slice on the left was chopped with a standard stainless steel knife, while the slice on the right was cut by a light stroke with a wabōchō. The difference in their surfaces is striking. 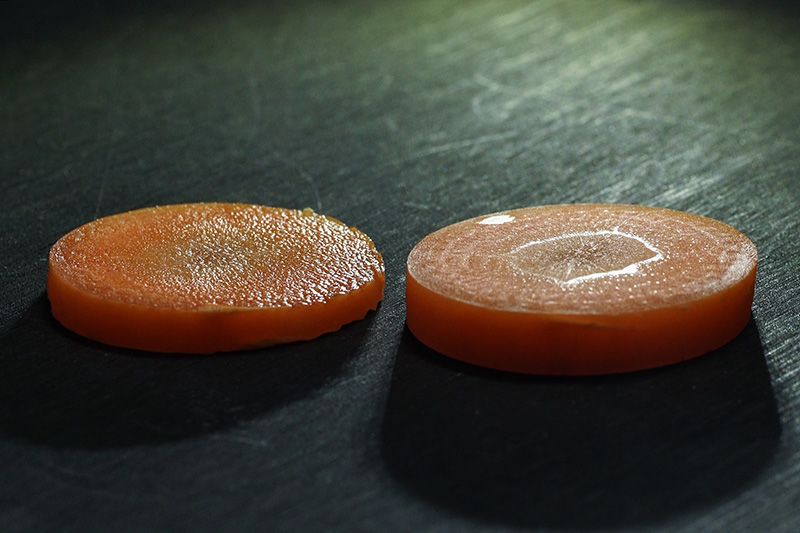 Heiberg first came to Japan when he was 23. He met and married a Japanese woman, and has been here ever since. After spending time teaching English and doing other jobs, he was employed at a company selling rasps and files when he received a wabōchō as a gift from a client in the Osaka Prefecture city of Sakai, one of Japan’s premier production centers for cutlery. Captivated by its superb cut, he spent the next nine years working at a cutlery firm, meeting and building relationships with knife craftsmen from across Japan and falling in love with their superb technique. Finally, in 2011, he opened his own wabōchō specialty shop at the foot of the famous Tsūtenkaku Tower in Osaka City’s earthy Shinsekai district. The store name says it all: Tower Knives Osaka. 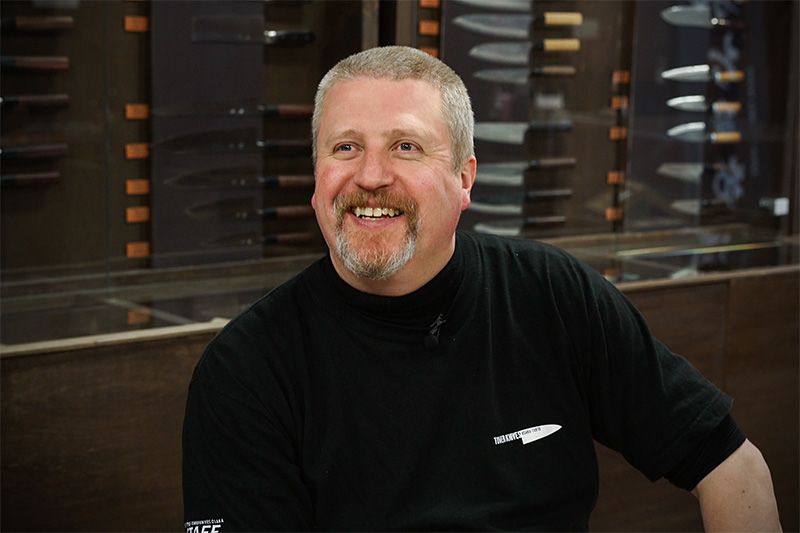 Heiberg dreams of the day when there are wabōchō in kitchens around the world.

“I knew I didn’t have it in me to become a craftsman myself,” Heiberg explains, “so I decided that instead I would spread the good word about wabōchō to the rest the world. I knew I could do it because the sales pitches I saw at Japanese knife stores were so hopelessly bad! [Laughs] The salesmen weren’t conveying any of the real appeal of wabōchō. And if a foreign customer happened to come in, they would practically panic and run. So I started a specialty store of my own.” 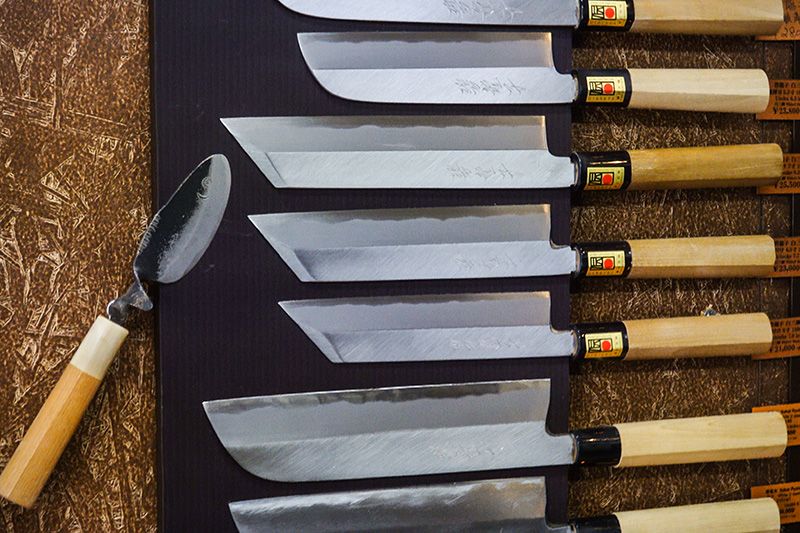 A Cornerstone of Washoku Culture

Washoku, registered as an intangible cultural heritage by the United Nations Educational, Scientific, and Cultural Organization in 2013, is spreading rapidly around the world, and the reputation of wabōchō is growing with it. Yet few people fully understand these unique knives’ characteristics and strengths. Without this understanding, says Heiberg, you are not “transmitting washoku culture” in the truest sense of the word.

“For example,” he explains. “If you use a traditional sashimi-bōchō, or sashimi knife, instead of a Western knife, you can slice the raw fish without crushing its structure. This is the reason that you can just lightly dip sashimi in shōyu soy sauce. If you used a blunter knife, the shōyu would soak into the crushed fibers, drowning the flavor of the fish. In other words, if you don’t use a wabōchō, you can’t savor the true taste of sushi and sashimi.” 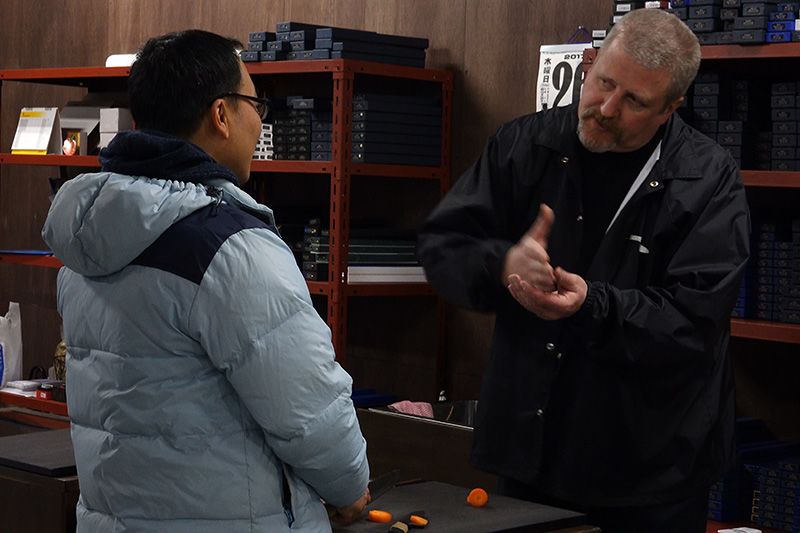 In fact, Heiberg says, the Japanese custom of eating raw fish itself owes much to the development of wabōchō. It was all a question of freshness and how long fish would keep.

“When the cut surface is uneven, more of it is in contact with the air,” he explains. “The more contact with the air, the easier for germs to get in. There’s far less contact with the air on a slickly sliced surface than on a crushed one. That’s why the ingredients cut with wabōchō stay so fresh, and take longer to go bad. I really believe the wabōchō was one of the things making it possible to eat fish raw and create Japan’s food culture back when there was no refrigeration, and ice was almost impossible to get.” 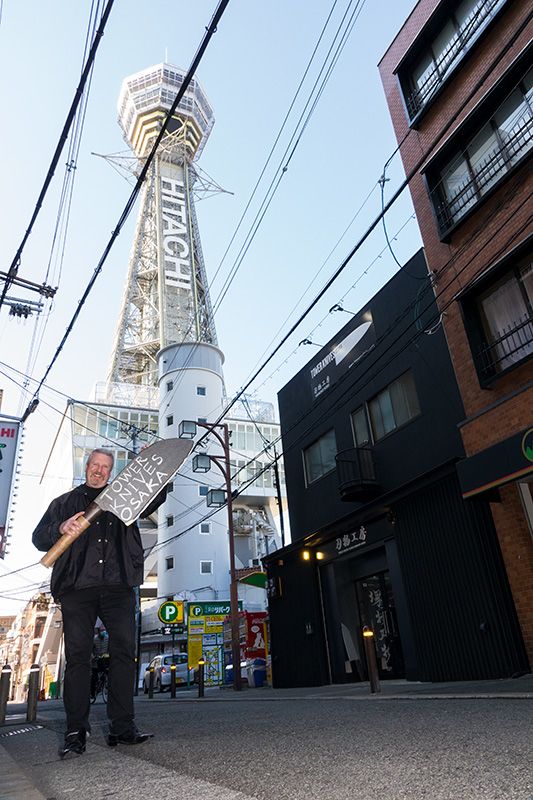 Inheriting the Qualities of Japanese Swords

Many of the production centers for wabōchō were originally famous for forging nihontō, or Japanese swords. During the long years of relative peace during the Edo period (1603–1868), and particularly following the 1876 haitōrei edict prohibiting the wearing of swords during the Meiji era (1868–1912), demand for the weapons plunged. That was when many former swordsmiths turned to making knives, scissors, and other household cutting implements.

Wabōchō inherit the manufacturing technology of nihontō, which combine outstanding cutting edges with great durability. As with nihontō, a wabōchō gets its fine cut by forging a sharper, more brittle steel blade onto a shock-resistant jigane base of softer steel, repeatedly refiring and hammering the two metals together until the raw blade is finished. The craftsman then meticulously shapes and polishes the blade and attaches the separately prepared handle to complete the wabōchō.

Another distinctive feature wabōchō share with nihontō is that many are asymmetrical, with the cutting edge running along one side of the blade instead of down the center. When you cut ingredients with an asymmetrical blade, the tip tends to turn slightly to one side, making it easier to remove the cut ingredients and improving work efficiency. Yet one of the things that most sets wabōchō apart from other knives is their boundless variety, from deba-bōchō for cutting fish and sashimi-bōchō sashimi knives for slicing their meat to nakiri-bōchō for chopping vegetables. Indeed, one of the big differences between Japanese and Western knives is the vast variety in the sizes and types of wabōchō crafted for cutting specific ingredients. 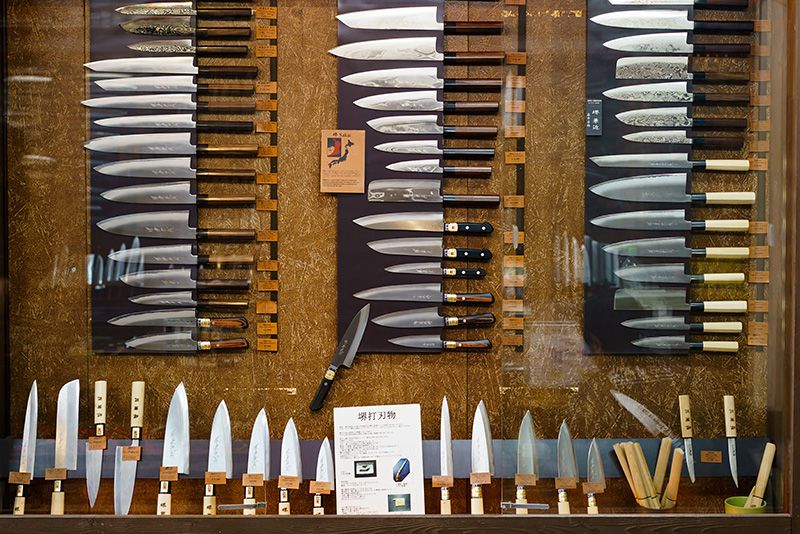 The many wabōchō on display at Tower Knives Osaka all come with Japanese and English product descriptions. 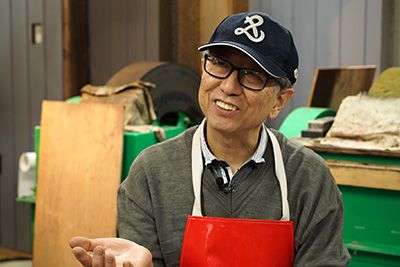 Fujii Keiichi is a Master of Traditional Crafts, a certification accorded only to craftsmen with outstanding skills.

Sakai City wabōchō craftsman Fujii Keiichi, who demonstrates his traditional knife making at the workshop attached to Tower Knives Osaka, hopes that wabōchō will spread around the world.

“There are certainly excellent knives in Germany and other countries,” says Fujii, “but most are meant for chopping solid, tough ingredients like potatoes and carrots into chunks. They’re optimized for German cooking. So naturally a German knife wouldn’t be suitable for making, for instance, katsuramuki, where washoku chefs shave off long, paper-thin sheets of radishes and other vegetables. Wabōchō evolved in response to the demands of washoku, which requires very delicate processes, and it resulted in all these different specialty blades. I’m confident that in the future the unique properties of wabōchō will make them useful for other cuisines as well.”

While exports of wabōchō have been growing in recent years, domestic sales are falling. The wabōchō made by traditional craftsmen are more expensive than mass-produced products, and because the blades are so sharp they can be easily nicked and need regular sharpening. Western-style stainless steel knives are cheaper and easier to maintain in comparison.

“A knife is a tool you use every day,” counters Heiberg. “When you have a sharp knife, it shortens your cooking time and makes cooking itself more fun. Sharpening a wabōchō now and then doesn’t take much time or effort. If anything, the real problem is that so many stores today sell wabōchō without explaining how to take care of them properly and how important it is to do that. If you take good care of a wabōchō, you can use it for years and years. Choosing a cheap knife that you’ll just toss when it starts getting old means throwing away a priceless culture.” 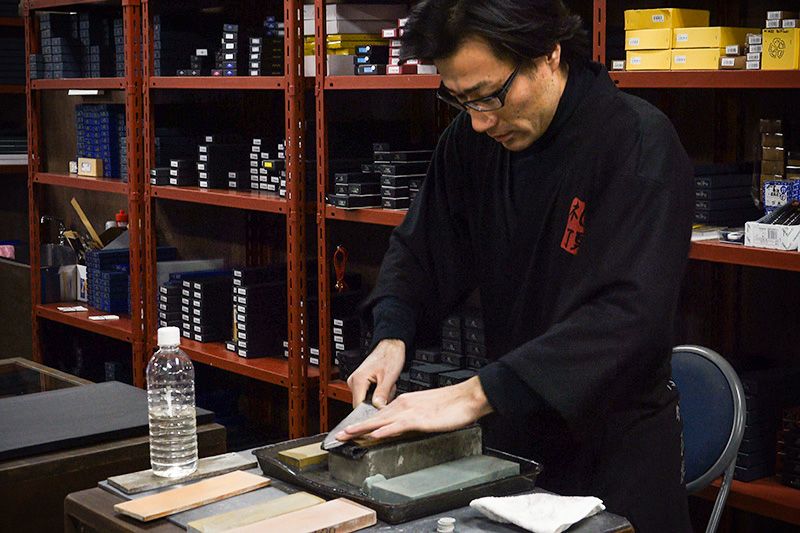 Passing On the Skills of Craftsmen 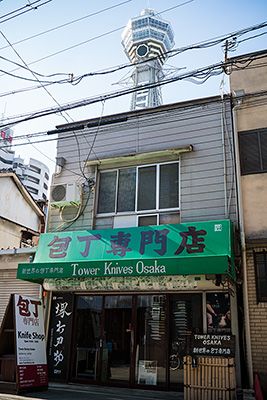 Tower Knives Osaka is winning a reputation both in Japan and abroad for its careful explanations of wabōchō and the range and quality of its stock. When Heiberg first started, the store was a second-floor walk-up. He soon relocated to a more spacious first-floor location, and followed that in 2015 by launching Tower Knives Tokyo in the Tokyo Solamachi shopping complex at the base of Tokyo Skytree. Then, in November 2016, he opened his pride and joy, the Tower Knives Osaka combination store and knife workshop.

“Our knife workshop is the distillation of all that I’ve been trying to achieve,” says Heiberg. “I wanted to create a store where craftsmen and customers could interact directly. Wabōchō only exist because of the skills of individual craftsmen. No matter how thoroughly you explain a product, if the customer doesn’t understand its creator’s technique and attention to detail, then you can’t convey its true allure. In this new store you get to experience the craftsmen’s techniques firsthand, speak with them directly, and buy your own just-finished wabōchō.” 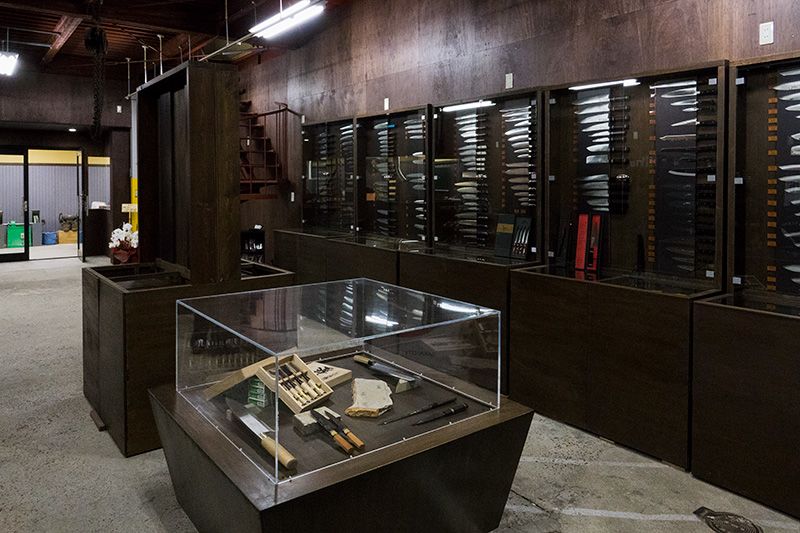 Tower Knives Osaka, with the glass-fronted workshop in the rear.

Knives That Enrich Your Life 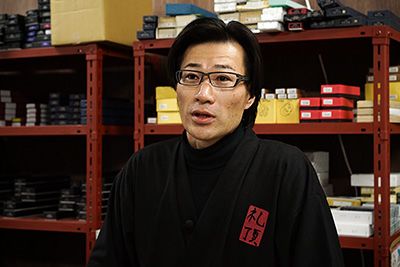 Kobayashi says he owes Heiberg a debt of gratitude.

Kobayashi Hiroki was born into a family of blade polishers in the city of Seki, Gifu Prefecture, and has continued to hone his knife-making skills with Heiberg’s constant encouragement. Today he is a craftsman who can perform every step in the manufacture of a wabōchō by himself, and even has his own brand.

“At Bjorn’s store I can talk directly with the customers and see how happy they are when they buy one of my knives,” he says. “For a craftsman, a place like this makes it all feel worthwhile. And in addition, I get to meet and learn new skills from incredible craftsmen from other parts of Japan, like Mr. Fujii. It brings together not only the craftsmen and the customers, but wabōchō craftsmen from all over Japan. Until now we never had much contact with one another, but domestic demand for wabōchō is falling and we can’t turn that around working alone. It may just be that Bjorn becomes the savior of the wabōchō world.” 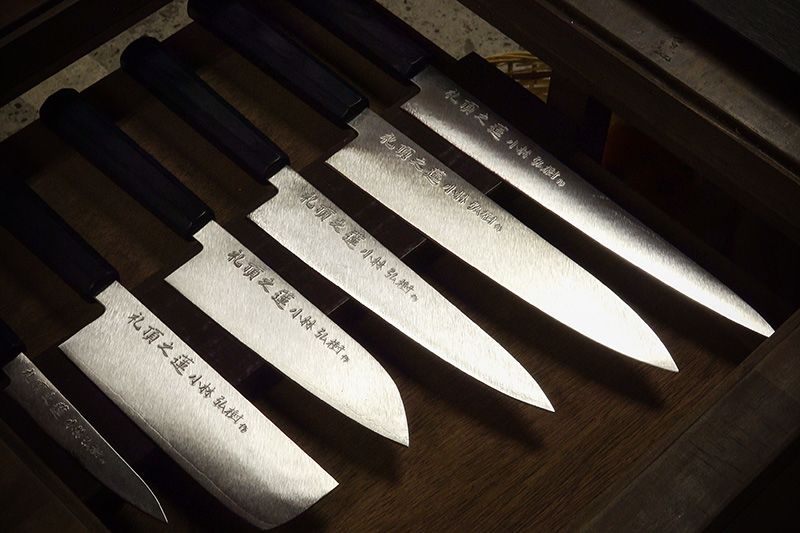 Kobayashi’s wabōchō are both incredibly sharp and beautiful to behold.

In addition to running his stores, Heiberg continues to put out the good word about wabōchō through public presentations and other publicity channels. He has also been providing wabōchō to washoku cooking classes for foreigners visiting Japan, so they can experience the quality of these unique knives for themselves.

“In Japanese they use the word kireaji to describe how well a knife cuts,” says Heiberg. “It’s written with the kanji for ‘to cut’ (kireru) and ‘flavor’ (aji, also pronounced mi), and it’s true: The flavor comes from the cut. Wabōchō make food more delicious and make cooking it more fun. I sometimes get email from our foreign customers saying ‘wabōchō changed my life,’ or, ‘your wabōchō give me joy,” and I don’t think they're exaggerating. Little by little, wabōchō are being adopted overseas, but right now a lot of what’s getting distributed are mass-produced products that are only so-so. I’m working my hardest to make sure the wabōchō of Japan’s true craftsmen get used around the world.” 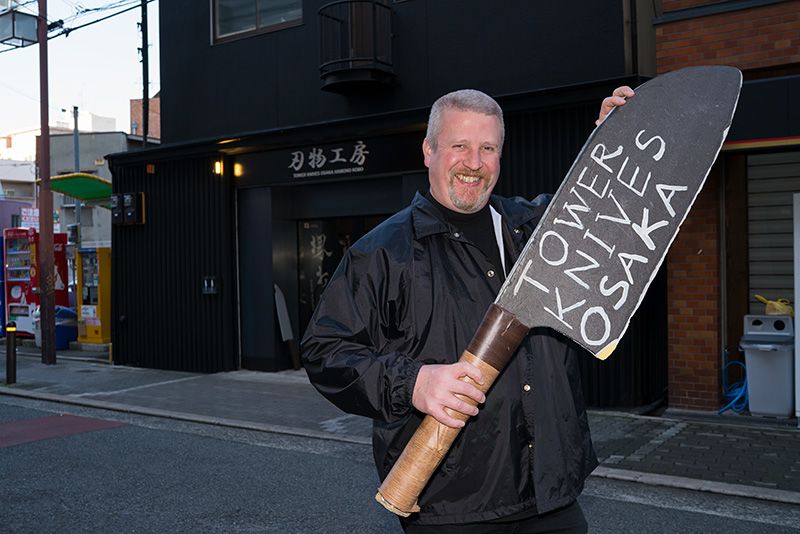 Tower Knives Osaka (main store)(Originally written in Japanese by the Nippon.com editorial staff and published on May 3, 2017. Photographs and video by Miwa Noriaki.)