The Simple Joys of Japanese Stationery

Culture Feb 26, 2018
The abacus, for centuries an essential computation tool, has today largely been replaced by electronics. In Japan, though, it remains in use as a way to teach children basic arithmetic and to keep older minds feeling young. In this article we visit Japanese firm Tomoe Soroban to learn about the changing role of the age-old counting device.

There was a time in Japan when the steady click of the abacus, or soroban, was heard in classrooms, offices, and shops around the nation. In the twenty-first century, though, people have forsaken the ancient instrument for computers, electronic calculators, and smartphone apps.

Tokyo-based Tomoe Soroban, though, is leading an abacus resurgence by marketing the counter’s potential as an education tool for young learners and a training device to keep seniors mentally fit.

A Tool for All Ages

Company president Fujimoto Tomoe says that when her father founded the firm in 1918 the abacus was widely used, but that in the digital age its status as a calculating staple has waned. She explains, though, that it is now enjoying a comeback as an education tool to help children develop numerical understanding.

“In the past young people studied it as a matter of course,” she explains. “But interest in it began to fade as other extracurricular options like swimming and English conversation classes grew. In the early 2000s, though, the declining math abilities of university students drew concern, and people began turning to the abacus to bolster their children’s fundamental arithmetic skills. It now consistently ranks among the top-ten afterschool pursuits.” 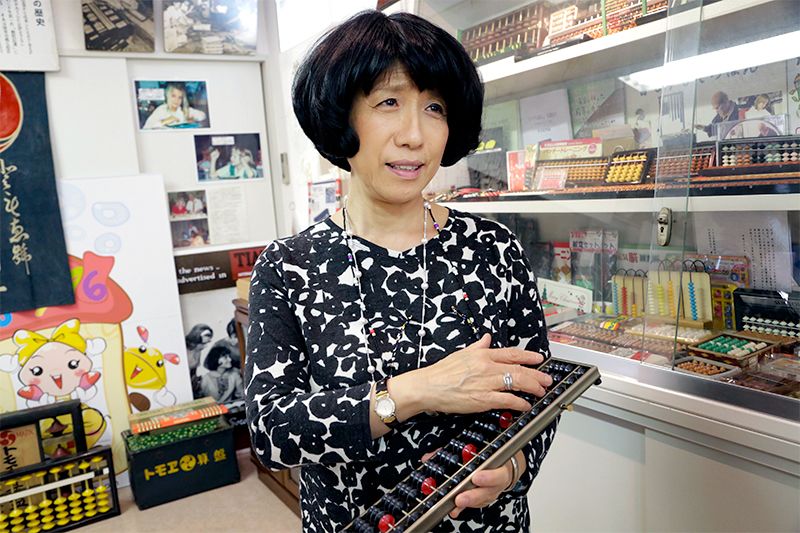 Second-generation president of Tomoe Soroban, Fujimoto Tomoe, left her job as an English teacher to head the company.

The soroban also appears to be finding its way back into the compulsory education system, helped in part by Tomoe Soroban’s best-selling 100-bead abacus. Young learners can use the simple frame of 10 rows of 10 beads each to play easy and fun counting games. 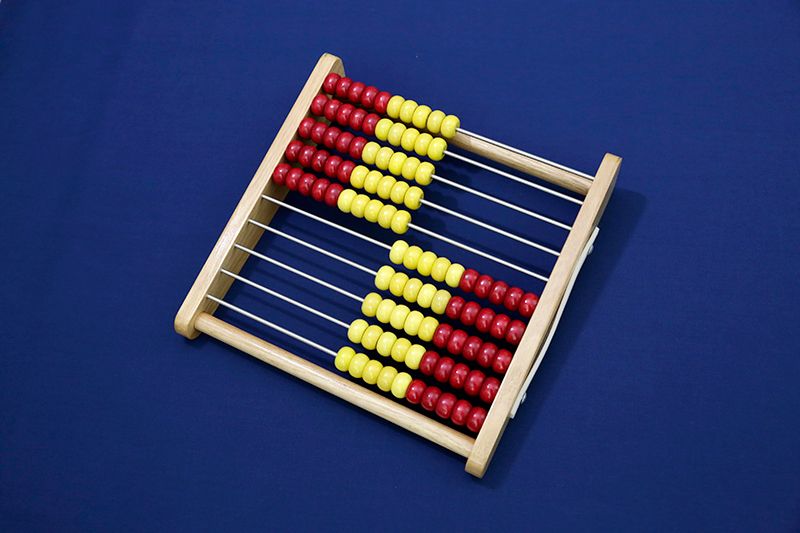 The 100-bead abacus provides a simple and fun way to learn how to count.

Tomoe Soroban is also promoting its counting frames as a way to keep aging minds feeling young. Fujimoto points out that doing simple arithmetic has been shown to increase cerebral blood flow and says that using an abacus adds a manipulative aspect that is thought to be equally beneficial.

The company regularly holds events at adult daycare centers that involve the abacus. “People don’t just have to do adding and subtracting,” Fujimoto explains, “but can use the counter for games like bingo, or they can rearrange the beads to match patterns printed on cards.” She notes that one of the greatest benefit of the popular classes comes from promoting social interaction. “Seniors often suffer from loneliness, so we focus on getting people talking.”

Tomoe Soroban has spent decades promoting the power of the abacus beyond Japan’s shores. It first set up a dedicated division for overseas business in 1960, but it was under the guidance of Fujimoto that the company took firm steps to bolster its profile overseas. 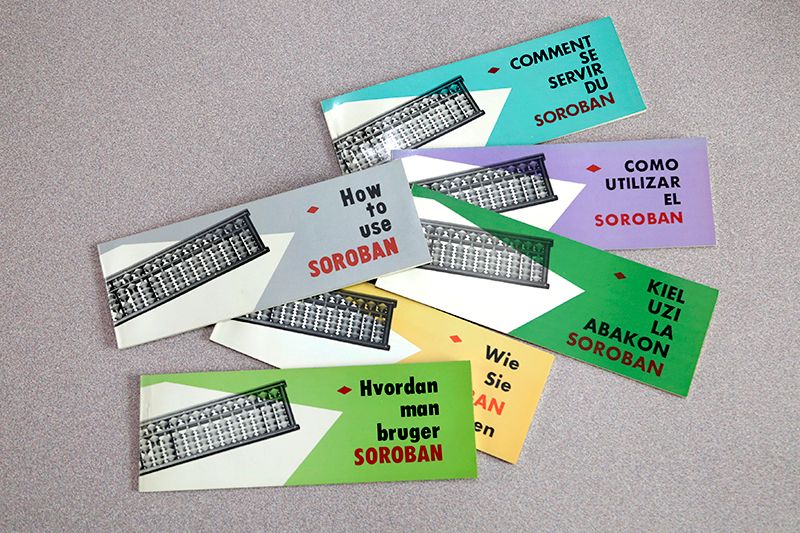 The firm offers its booklet explaining how to use an abacus in English and five other languages, including Esperanto.

“In 1996 we launched our website and now conduct most of our sales online,” explains Fujimoto. “Customers can easily purchase our wares from almost anywhere in the world.” Along with international orders, the company regularly receives requests from people overseas wanting to attend the firm’s training courses.

Fujimoto recalls a case a few years earlier of a university teacher in Turkey looking to spread the abacus in their homeland. “The person attended a two-day class in Tokyo, and last I heard they had trained 500 instructors in Turkey and now run a successful abacus school with a student enrollment of 25,000.” There have also been attendees from such diverse locations as the United States, South Africa, and the United Arab Emirates. Fujimoto fondly remembers one Sri Lankan woman living in England who attended a seminar to learn abacus activities for senior citizens. 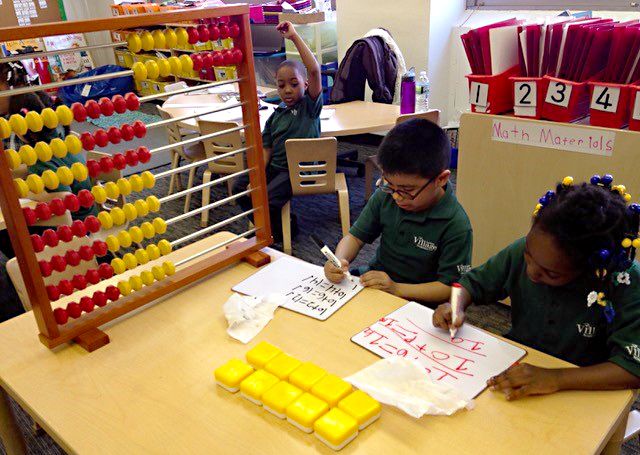 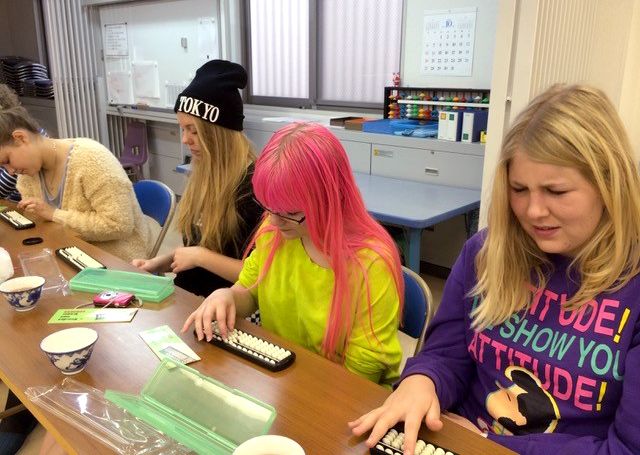 Students studying Japanese at a high school in Denmark practice the abacus during a workshop in 2013. (Courtesy Tomoe Soroban)

The Abacus in Japan

Although the abacus has been used since ancient times, it only made its way to Japan from China around the end of the sixteenth century. It came into widespread use during the Edo period (1603–1868) and gradually changed to fit domestic needs.

Unlike the round beads of the early Chinese abacus, the counters of the Japanese soroban have a raised edge running around the center. The number and value of beads are also different. The Chinese abacus has a standard 2/5 arrangement of 2 beads equaling 5 each on the upper deck and 5 beads equaling 1 each on the lower deck. In 1935 Japan switched to a 1/4 structure so that each rod can represent values from 0 to 9.

Fujimoto says applying the decimal system was a key development. “With a little practice anyone can easily do computations in their head by imagining the structure of a soroban.” 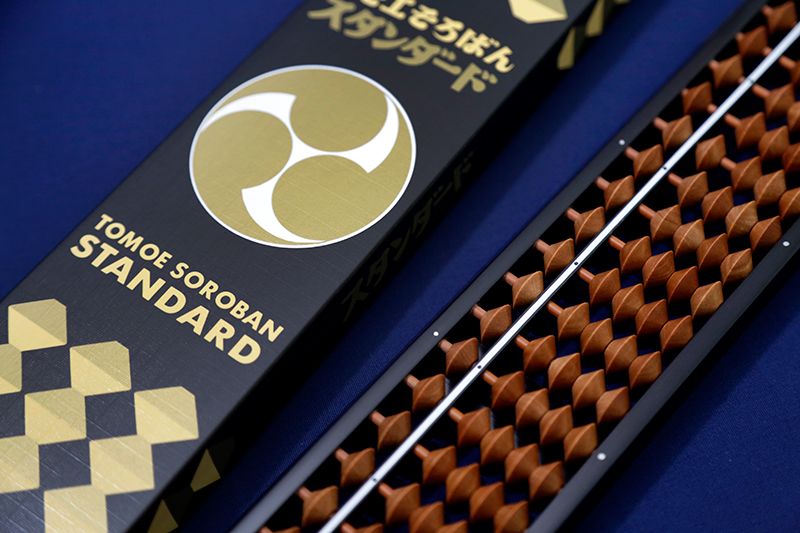 Tomoe Soroban makes its abacuses at its factory in Ono in Hyōgo Prefecture with beads crafted from an especially hard variety of birch and hand-assembles into rows on bamboo dowels.

Going forward, Tomoe Soroban will keep up its campaign to spread the word of the unique mathematical functions of the abacus, confident that the age-old device will continue to hold its own in the expanding digital society.

(Originally published in Japanese on January 30, 2018. Photos by Nagasaka Yoshiki except where noted.)