Visiting Gods and the Festival of the Dead

The first time I went to Akusekijima, in 1975, I was leafing through photo albums at the private home where I stayed when I saw something really striking—rough-hewn masks full of wild energy. These masks, giant objects standing at least a meter high, were very different from the sophisticated nō masks we are accustomed to seeing.

Festooned with leaves from fan palms, the masks seemed like spirits lurking in a tropical forest. They belong to boze, gods who appear just once a year—in the afternoon on the last day of Bon, the festival of the dead, celebrated on the islands according to the lunar calendar on July 16. Boze, which appear to chase away evil spirits, enthralled me right away.

When I returned to Akusekijima two years later, it was to see boze for myself. After lunch on the appointed day, I strolled to a clearing formerly the site of a temple, where three boze masks awaited their wearers. Made of paper stretched on bamboo frames, they were decorated with red and black stripes created with red clay and India ink.

Grotesquely shaped, with googly eyes, large ears, and noses like those of a tengu goblin, the masks had large mouths in which ragged teeth were visible. The three masks seemed the same, but showed subtle differences on closer examination. Eventually, three men appeared, who put on the masks and began fastening fan palm leaves to their bodies. They also covered parts of their hands and feet with fan palm bark. 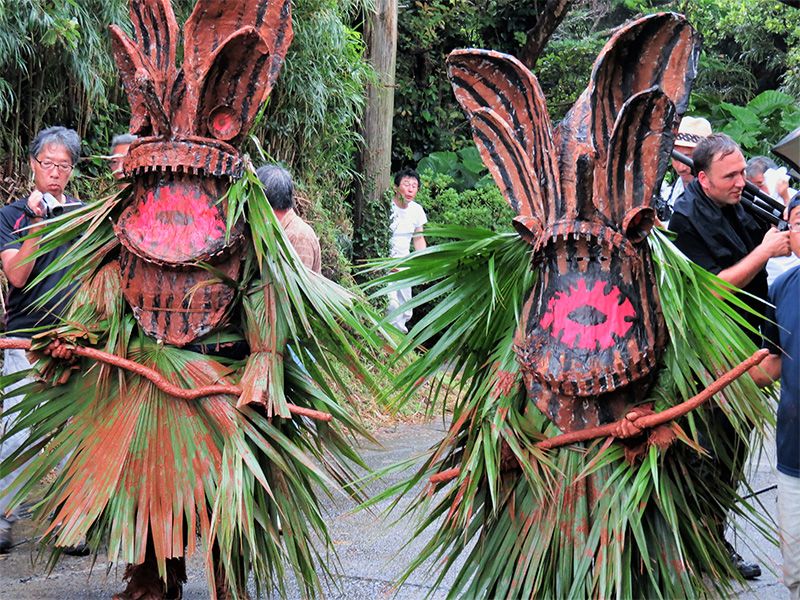 Boze leaving the grounds of a former temple, bound for the island’s community center.

In front of the community center, men were performing a Bon dance just like those seen on the main islands. Once they had concluded their dance, though, a large drum began to beat out a pounding rhythm. The three masked men bounded onto the scene, wordlessly brandishing phallus-shaped sticks, menacingly stamping the ground, and shaking their bodies. The rustling of the palm leaves added electricity to the air and the wiggling of the masks’ ears made an unnerving sound.

Now breaking the wordless series of actions, the smallest of the boze emitted a piercing cry and entered the community hall in bare, dirty feet. The other two began chasing the women and children in the open space, poking at them with their sticks. The younger children were frightened and fled in terror, but the girls submitted to the poking, since it is believed to bring good luck for the year. Meanwhile, the tatami indoors were covered with dirt, and the air was filled with shrieks and cries. But no one put a stop to the mayhem. At the peak of the excitement, the boze shook their bodies, raised their arms in the air, and disappeared. It was all over in just 20 minutes. 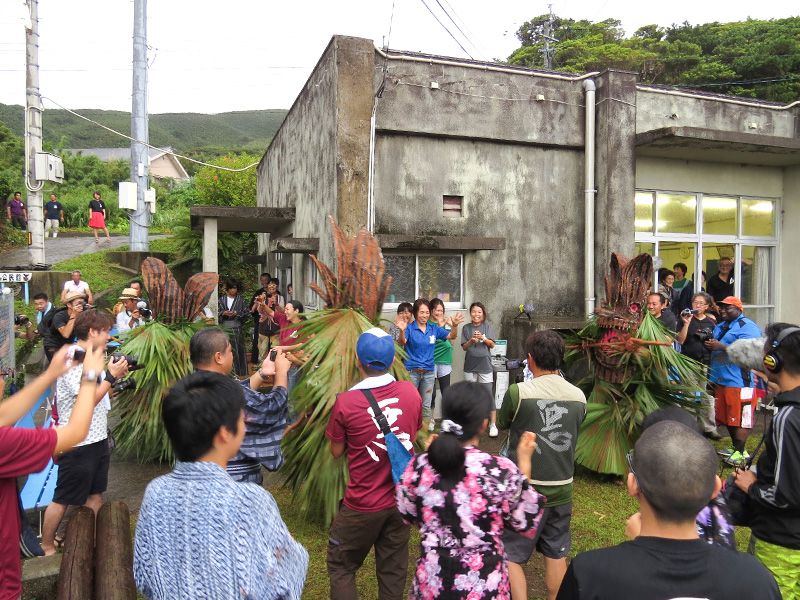 Three boze gyrating wildly in front of a small crowd of islanders.

Near midnight, I headed for the grounds of the elementary school under a full moon. The jūgoya-odori, which comes from the Amami Islands, was taking place. Strong male voices rose together with clear female voices in a mournful melody that filled the air and faded away with the sound of the surf. The gods of the southern seas live on here, and this gathering for song and dance seemed like a ritual from centuries ago passed down to modern times.

Boze were once a secret tradition of the island, but word began to spread about 40 years ago. Today, boze are a symbol of the Tokara Islands, and tours including a visit to Akusekijima when the boze appear began around a decade ago. In March 2017, the boze of Akusekijima were also designated an Intangible Folk Cultural Property by the national government. Sadly, though, the jūgoya-odori, the all-night singing and dancing that brought to mind gods from time immemorial, died out some time before then.

Akusekijima, situated in the warm Kuroshio Current, abounds in marine life—skipjack tuna, flying fish, mackerel, Ise prawns, green turban shell, and other delicacies. But Tokara is perhaps better known for its distinctive tōfu, Akuseki-dōfu, which substitutes sea brine for bittern as the coagulating agent. This gives the tōfu a subtle salty flavor accentuating the sweet taste and rich fragrance of the soybeans. This well-drained tōfu is firm so it will keep its shape even if used in simmered dishes. But the tastiest way of enjoying this tofu may be to have it when it’s still in soft mounds, just before it’s drained. Soft and warm, it’s rich and feels almost like a filling soup. A few decades ago, older women of the island still made this tōfu regularly, and if you were lucky, you might partake of it at your lodgings. But those women have passed on, and nowadays the island’s distinctive shima dōfu is only made on special occasions. 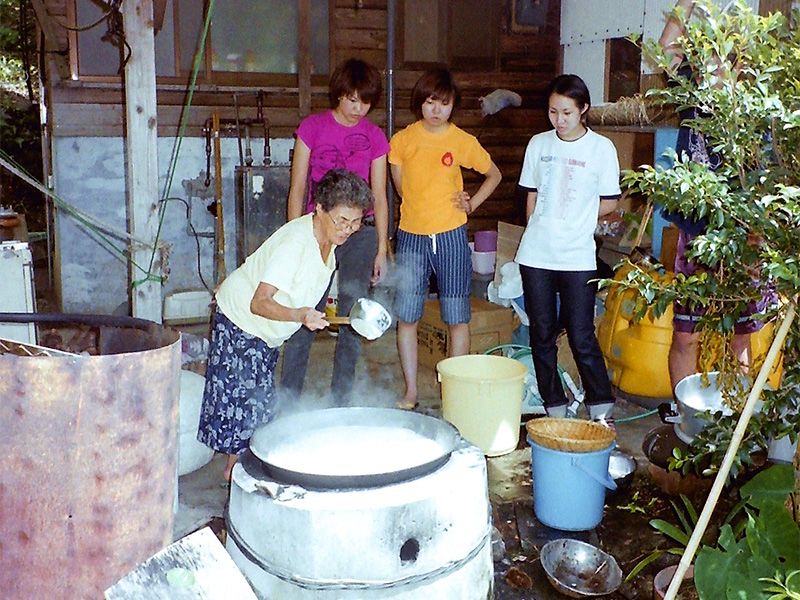 Another typical food is daimyō takenoko, shoots of a variety of bamboo that grows all over the island. This is just one of several kinds of bamboo shoots eaten in the region. Locally, the shoots are called deme, kosan, kara, hacchi, or moso, in descending order of tastiness. I agree that deme, as daimyō takenoko is called, tastes best of all. 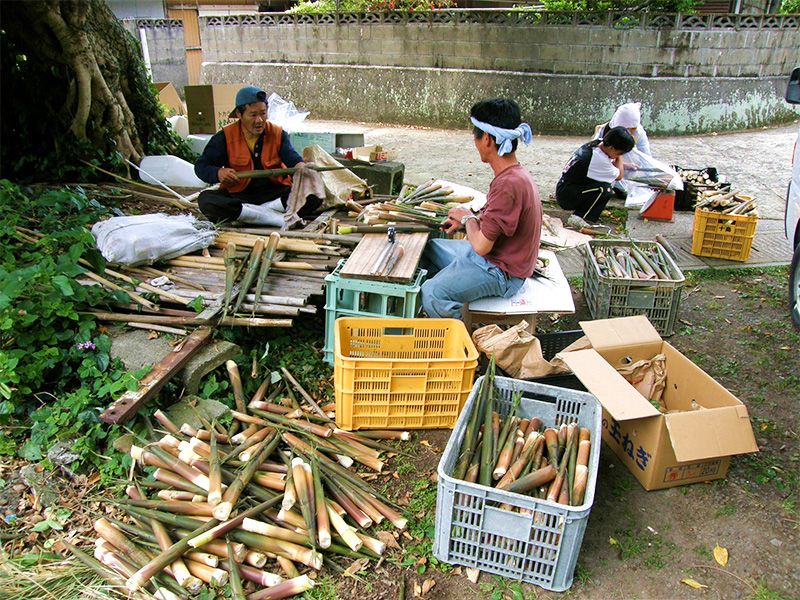 Freshly harvested daimyō takenoko is not bitter at all and can be cooked right away, without the additional preparations generally required to make bamboo shoots palatable. It is equally delicious simmered, sautéed, fried, or in soups, but my favorite is grilled takenoko. It can be grilled over gas but comes out best when steam-broiled, bark and all, in the coals of a campfire. This concentrates its sweetness and umami, sending forth a fragrant smell—truly a memorable taste experience.

Akusekijima is not a widely visited place, but it’s on the bucket list of many an onsen lover. Hot springs flow in several areas around the coast to the north of Yasurahama Port, where the ferries dock. You will find a hot spring equipped for bathers if you climb up to the village and keep going for a bit, then head left and downhill.

Where the road comes to a dead end downhill at the coastline, you will see a large rock painted with the onsen symbol. Below is a hot spring whose temperature is regulated by the tides. When the tide is out too much, the water is too hot for bathing, but when the tide is too high you’re simply having an ocean swim. It’s best to check with local inhabitants as to the best times for bathing. 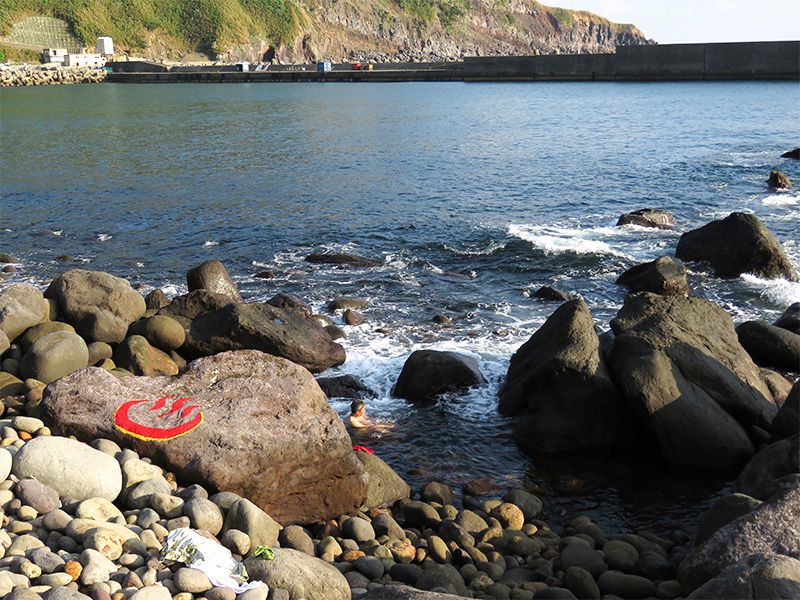 A tidal hot spring, with the best bathing temperature determined by the tide.

If you turn off to the right before reaching the tidal hot spring, you will find Yudomari Onsen, a facility with gender-segregated baths and an open-air rotenburo (open from 4:00 to 9:00 PM; charge ¥200). Further on, past the campgrounds, is a slope pierced by numerous fumaroles. Directly below is an onsen offering hot sand baths, where you spread a blanket on the sand, stretch out, and feel the heat penetrate your bones. 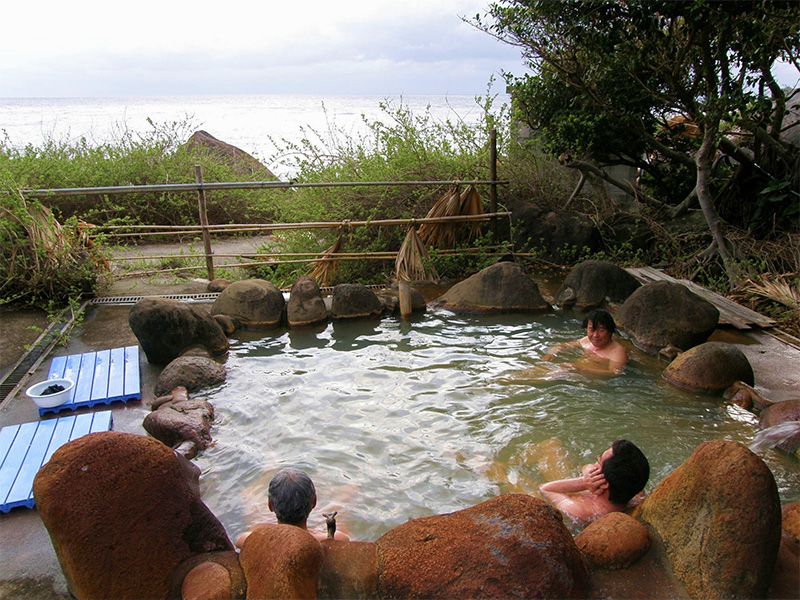 Bathers view the setting sun from an open-air bath. This bath, right on the coast, is often damaged by typhoons and may be closed from time to time.

(Originally published in Japanese on October 24, 2017. Photos by Saitō Jun. Banner photo: Boze emerging from the site of a former temple.)