The Changing Face of Tokyo

Culture Feb 6, 2018
Tokyo’s skyline has dramatically changed over the past few decades as new clusters of high-rises have sprung up around the city. Mori Towers are at the forefront of urban development projects that are transforming the heart of the capital. 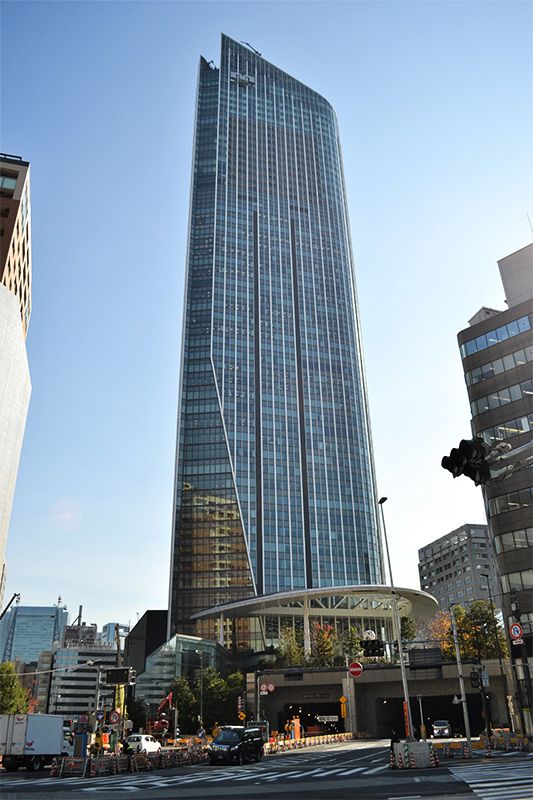 Toranomon Hills stands above the entrance of Shin-Tora-dōri. An ongoing development project keeps the area abuzz with construction vehicles.

Traveling by car from Tokyo’s Toranomon district to the head office of leading property management company Mori Building in Roppongi provides an up-close view of the real estate firm’s new Toranomon Hills tower. The massive high-rise, part of the company’s ongoing development project in the area, sits atop the tunnel entrance to a new 1.4-kilometer segment of the capital’s Loop Road No. 2, a yet-incomplete route through central Tokyo. The section of new road, dubbed MacArthur Avenue during the planning stages after the famed supreme commander of the allied forces, had been stalled for 68 years due to difficulties procuring land. But in the course of planning its new complex, Mori Building was able to come to an agreement with property owners, and the stretch of roadway opened in March 2014 with the nickname Shin-Tora-dōri, the “road between Shinbashi and Toranomon.”

The headquarters of Mori Building are located in the Roppongi Hills complex, on the upper floors of Mori Tower, a predecessor to Toranomon Hills completed in 2003. Nippon.com recently met there with the firm’s head of public relations, Yamamoto Masakatsu, to talk about the company’s ongoing projects and future plans.

Standing before a sprawling scale model of Tokyo on the building’s forty-third floor, Yamamoto focuses a laser pointer on the replica city as he talks about Mori’s varied undertakings around the capital. “Instead of relying only on flat maps,” he explains, carefully guiding the dot of light across the miniature landscape, “we always refer to this 3D representation to get a vivid image of how new projects will fit into the landscape of each locale.”

According to Yamamoto, around 3% of structures in Tokyo are knocked down and rebuilt each year. Employees work constantly to keep the model up to date, swapping out old buildings for new ones based on snapshots taken during frequent bicycle reconnaissance missions around the city. 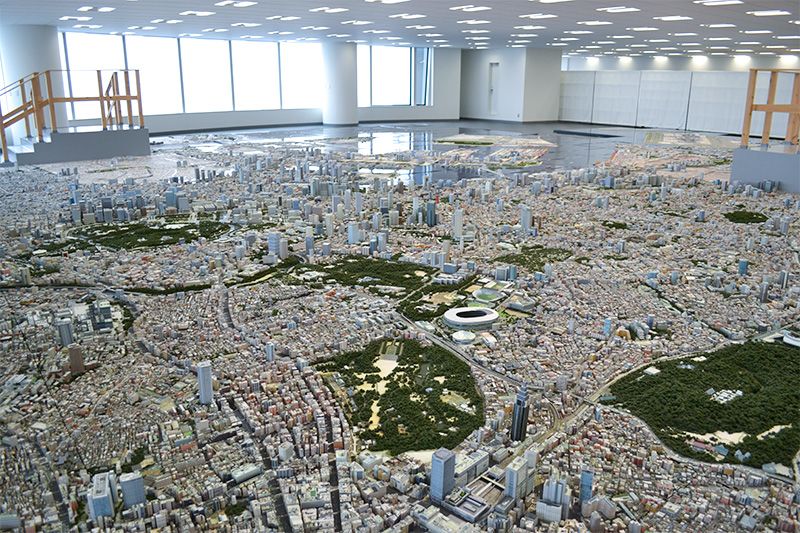 A view of the comprehensive scale model of Tokyo inside the Roppongi offices of Mori Building, looking from Shinjuku to Tokyo Bay.

The Mori Philosophy of Urban Revitalization

Mori Building founder Mori Taikichirō established the property firm in 1955 as Mori Fudōsan. Japan was in the middle of its postwar period of rapid economic growth, and the company tapped into the growing need for office space, constructing and leasing scores of buildings in the Shinabashi and Toranomon areas. Employees refer to this time as the “number building era” for the policy of foregoing names and numbering structures in the order they went up. The company competed the Nishi Shinbashi 2 Mori Building—its first, despite the number in the name—in 1956.

Mori Building gradually expanded its portfolio to include large-scale redevelopment projects, starting with the trendy LaForet Harajuku shopping complex in 1978. This was followed by the mixed-use Ark Hills complex in Roppongi in 1986.

Then in 1993, Mori Minoru took the helm from his father and began to chart a radically different course for the company based on his own vision for Tokyo. He was concerned that land prices and the high cost of living in the capital had produced an exodus to suburbs in the surrounding prefectures of Chiba, Kanagawa, and Saitama, forcing people to spend hours each day commuting to and from offices and schools in the city.

At the heart of Minoru’s vision was a revolutionary shift from Tokyo’s old industrial model toward a society based on information, knowledge, and technology. In 1999 he labeled the concept as an “urban new deal,” saying he wanted to reinvent Tokyo as a more livable city by doubling open spaces and enabling residents to increase and make greater use of their free time. 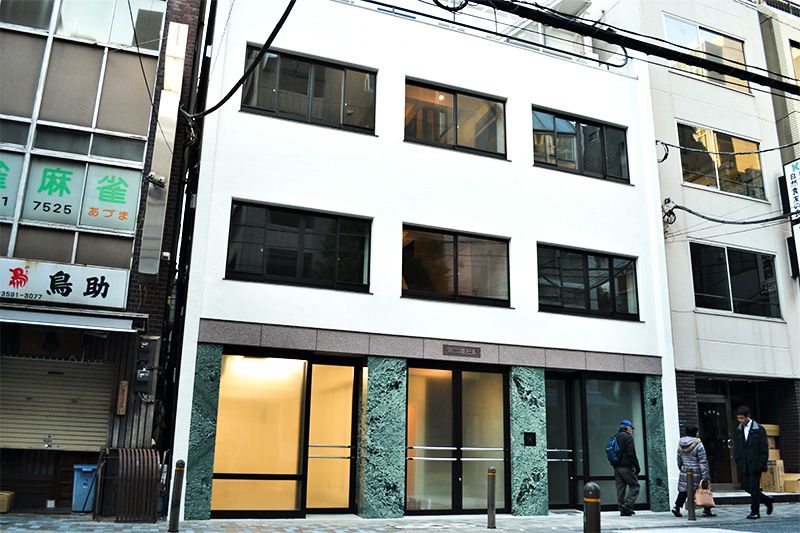 The Nishi Shinbashi 2 Mori Building after it was renovated in 2017.

The idea of garden cities, self-contained communities of agricultural, industrial, and residential land interspersed by greenbelts, was first proposed in 1898 by British urban planner Ebenezer Howard. Later, the Swiss architect Le Corbusier refined this into the vertical version of the concept. Minoru was inspired by Le Corbusier’s ideas and adopted them as a plank of Mori Building’s philosophy asserting that urban planning and architecture must have the dual goals of changing society and invigorating the economy.

Completed in 1986, Ark Hills was the first of Mori Building’s signature “hills” projects built on the vertical garden city idea. It stands at the crossroads of the districts of Akasaka and Roppongi and was designed to bring together residents and workers, as well as attract leading overseas financial institutions to Tokyo.

The complex is dominated by a creased-looking rectangular high-rise, the Ark Mori Building, and includes offices, retail facilities, the residential Ark Towers, a television studio, concert venue Suntory Hall, and several gardens. There is also a triangular tower housing the ANA Intercontinental Hotel Tokyo. Ark Hills is modeled after New York’s Rockefeller Center as a privately-owned complex offering public spaces people can use in life, work, or leisure.

The Ark Hills high-rise (left) and main entrance with the complex’s emblem (right).

Construction of the Ark Hills project got underway in November 1983 after 14 years of planning. For Mori Building, it represented a change in direction away from real estate deals and into the realm of full-fledged urban development. The firm had to rely on its construction and leasing operations to finance the plan, though, building 15 more “numbered buildings” as plans for the project crept forward. It eventually was able to acquire 80% of the necessary land, buying it during the heady “bubble” years when prices were assumed to rise indefinitely. Although a financial crisis and ensuing decades of economic stagnation proved this premise wrong across most of Japan, land prices around Ark Hills have remained strong. 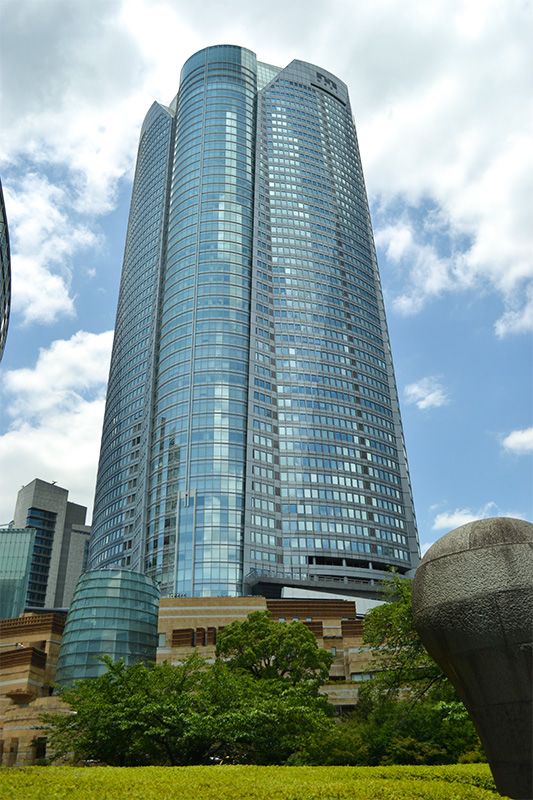 The complex took 17 years to complete, the majority of which, 14 years, was spent working out deals with the 400 people who lived or owned plots in the area.

Roppongi Hills, with its trademark 238-meter tall, 54-floor Mori Tower, opened in April 2003. The compound also includes the Grand Hyatt Tokyo hotel, the Keyakizaka Complex containing a movie theater and greenspace, and the Roppongi Hills Crosspoint office building. On the lower levels is the event area Roppongi Hills Arena, situated opposite from the head offices of broadcaster TV Asahi and the small Mōri Garden, designed to commemorate the gardens first built on the estate of feudal leader Mōri Hidemoto in the mid-seventeenth century. There are a total of six high-rises along Keyakizaka-dōri, the main roadway through the complex, the tallest being the twin Roppongi Hills Residences. 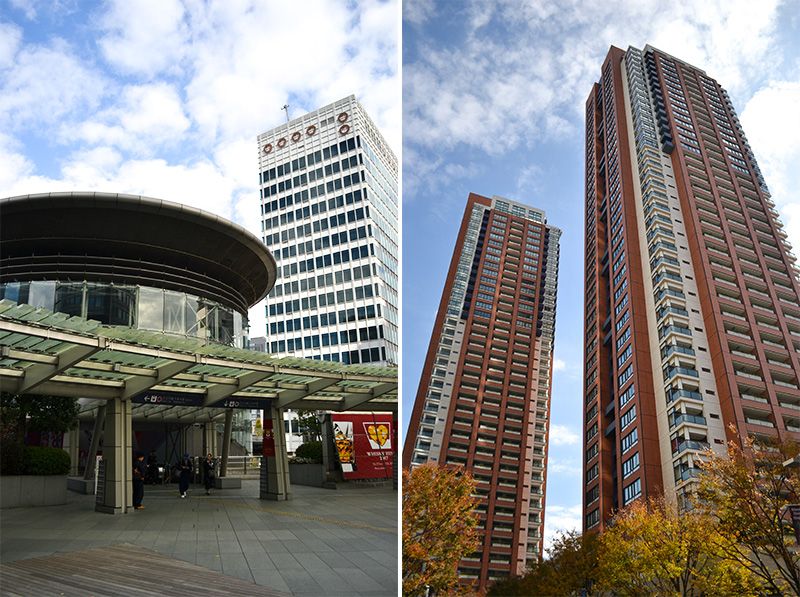 Roppongi Hills sees upwards of 110,000 people, including employees, come and go each weekday. In constructing the complex, Mori Building aimed to create a new cultural and leisure center in the Roppongi district at the heart of Tokyo. The Mori Art Museum, located inside Mori Tower, hosts the annual Roppongi Art Night, a contemporary art event. It is one corner of the area’s so-called art triangle, the other points being the National Art Center, Tokyo and the Suntory Museum inside the Tokyo Midtown complex.

Mōri Garden next to the headquarters of TV Asahi (left) and the zelkova-lined Keyakizaka-dōri. 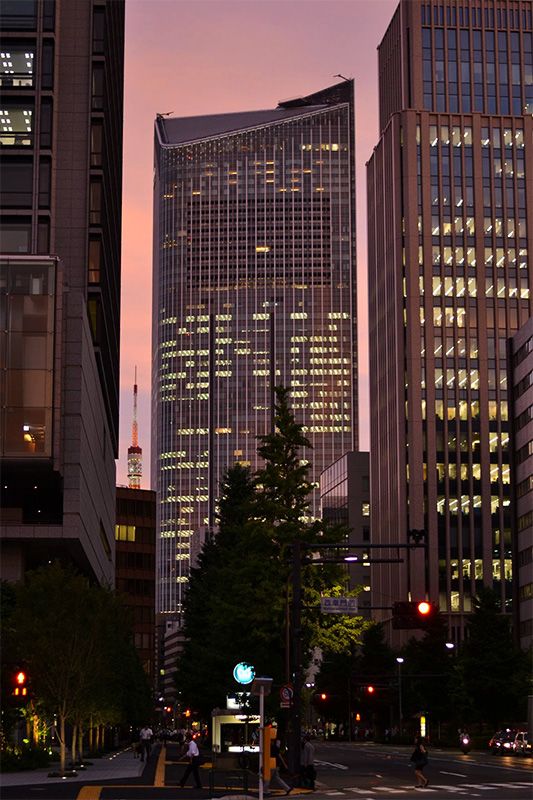 While the focus of Roppongi Hills is culture, Mori Building is developing the Toranomon Hills complex as a center of international business to enhance Tokyo’s global profile. When completed, the complex will spread across seven and a half hectares in the Toranomon business district. The 247-meter, 52-floor Toranomon Hills Tower, the first of four high-rises scheduled to be built, opened in 2014, just a stone’s throw from the office building where Mori Building began 60 years earlier.

(Originally written in Spanish by Daniel Rubio of Nippon.com. Banner photo: Roppongi Hills as seen from Tokyo Tower. All photos by Nippon.com.)