Culture Nov 7, 2018
A millennium ago, Murasaki Shikibu’s keen observations of the Japanese aristocracy and court bore fruit in her literary works, including the masterpiece The Tale of Genji.

We do not know the true name of the woman who is one of Japan’s finest ever writers. The author who has come to be called Murasaki Shikibu is most famous for her monumental work Genji monogatari (trans. The Tale of Genji), which has been described as the world’s first novel. She is also remembered for her diary, which in addition to its literary qualities is a source for what little we know of her life. One of her many poems appears in the country’s best-known poetic anthology Hyakunin isshu, a collection of single poems by 100 writers of the classical age.

Her sobriquet of convenience is most likely a composite of the Genji character Murasaki and her father’s one-time position in the Ministry of Ceremonial Affairs (the Shikibu-shō). It has been used since the late Heian period (794–1185). But as with many of her contemporaries in the great flowering of literary women of the time, her real name remains a mystery.

Growth of a Writer

Murasaki’s father, Fujiwara Tametoki, belonged to the influential Fujiwara family that essentially ran Japanese society in the late tenth century, when she was born. It was a large clan, however, and she was born into a minor branch, meaning that she was of the middle ranks of the aristocracy in what was known as the zuryō class. Perhaps because they were less constrained than their social superiors, the female Heian writers tended to come from this class.

Murasaki was born around the year 973. As she does not mention her mother in any of her writings, it is thought that she died while the future writer was very young. Her father Tametoki was a great scholar of the Chinese classics. The young Murasaki was a quick study and would go on to display her accumulated erudition in Genji. Heian society did not greatly approve of women studying the classics, however, and her father lamented that with her talent she should have been born a boy.

In 996, Murasaki traveled with Tametoki to the Echizen domain (now Fukui Prefecture), where he had been assigned as governor. By now she was in her early twenties, and unusually for the era was still unmarried. While in Kyoto, she had had a suitor—Fujiwara Nobutaka, another member of the same powerful clan—who was a widower 20 years her senior. Perhaps aided by the lonely chill of winter on Japan’s snowy west coast, after two years his letters persuaded her to return to the capital to become his wife.

After just a few years, their married life was cut short by Nobutaka’s death, which left Murasaki a widow with a young daughter. Her poems of the time express her grief and her anxiety over her insecure position. Whether it was a way of coming to terms with this situation or not, she threw herself into literary activities. It is thought that her growing reputation, possibly gained through the dissemination of early Genji chapters, won her a place in the imperial court.

In the marriage politics of the time, aristocrats secured power by marrying their daughters to the current emperor, putting them in the influential position of grandfather to the next emperor. Via this tactic, the leading Fujiwaras were able to control the country for long periods, often as regent to a child ruler. In 990, Fujiwara Michitaka arranged for his daughter Teishi to marry Emperor Ichijō and become imperial consort.

When Michitaka died, however, his younger brother Michinaga saw the opportunity for personal advancement. He also had his daughter Shōshi marry Emperor Ichijō in 1000. While it was typical for the emperor to have several consorts, what was unusual was Michinaga’s insistence that his daughter was equal in the hierarchy to the first empress, Teishi. A rivalry developed between the courts of the two empresses, which extended to the literary arena. Murasaki was brought in to boost the accomplishments of Shōshi’s court.

Murasaki’s diary was written while she was in attendance on the empress. It describes the court’s clothes, conversations, and such rituals as those surrounding the birth of Shōshi’s first son. There is also an episode when the aristocrat Fujiwara Kintō—yet another Fujiwara!—talks about her as “young Murasaki,” which both indicates that this early Genji chapter had been written by this time and is thought to be the origin of the author’s common name.

Murasaki’s literary contemporary Sei Shōnagon—also not her real name—was part of Empress Teishi’s retinue. The author of the classic Makura no sōshi (trans. The Pillow Book), she was renowned for her wit, yet Murasaki was famously unimpressed, writing in her diary that Shōnagon was conceited and superficial.

In the struggle between the two empresses, Michinaga’s political maneuvering won out, and both of Shōshi’s sons went on to be emperor. What exactly happened to Murasaki, however, remains unclear. She is believed to have died in her early forties around 1014. Despite what little we know of her, the lasting popularity of her masterpiece Genji has preserved her in Japanese memory. Her image appears on the ¥2,000 bill. 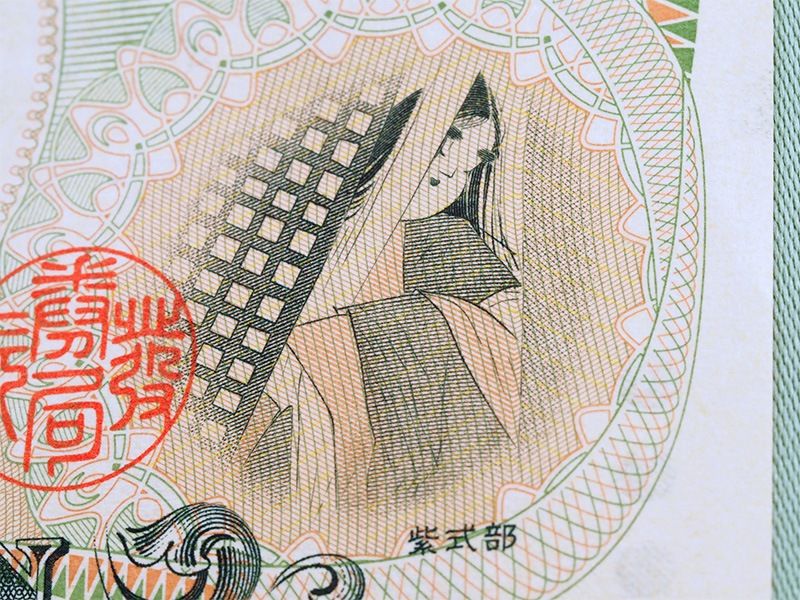 Accomplished Female Writers of the Heian Period and Their Representative Works

(Originally written in English. Banner photo: A statue of Murasaki Shikibu stands next to Uji-bashi, a bridge in the present-day city of Uji, the setting for the famous final 10 chapters of her monumental work. © Pixta.)