Abe Selects Shima as Venue for G7 Summit in 2016

Prime Minister Abe Shinzō announced on June 5 that Shima in Mie Prefecture will host the Group of Seven summit to be held in Japan in 2016. The main venue for the summit will be Kashikojima, one of a number of picturesque islands located along the area’s rugged Pacific coastline. The close proximity to Ise Shrine and other historical sites is thought to have influenced the selection, with the locality expected to place the focus on conveying traditional Japanese culture to attending world leaders.

Prior to departing from Haneda Airport for Germany for the 2015 G7 summit, Abe explained his reason for choosing Mie Prefecture, saying he wanted to select a venue that would allow other leaders to experience Japan’s natural beauty, rich culture, and deep tradition.

Along with Shima, seven other candidate cities were in the running. These included two symbols of recovery: Sendai in Miyagi Prefecture, which has attracted attention for its rebuilding efforts after the Great East Japan Earthquake in 2011, and Hiroshima, a city that was reborn after being destroyed by an atomic bomb in 1945.

A Culinary and Cultural Treasure Trove

Shima is situated on the eastern side of the Kii Peninsula, two hours by express train from Nagoya and three hours from Kyoto. In 1946 the surrounding area was designated as the Ise Shima National Park. The deeply indented coastline features pearl farms as well as female sea divers known as ama, who catch abalone and other varieties of shellfish. It is also famous for lobsters, oysters, and blowfish. To the northwest of Shima is Matsuzaka, home of the renowned matsuzakagyū variety of Japanese beef.

Bordering Shima to the northwest is Ise, site of the ancient Ise Shrine. For over 1,300 years the main buildings of the shrine have been rebuilt every 20 years in a ceremony known in Japanese as shikinen sengū. Each year over 10 million people visit the inner and outer confines of the shrine. 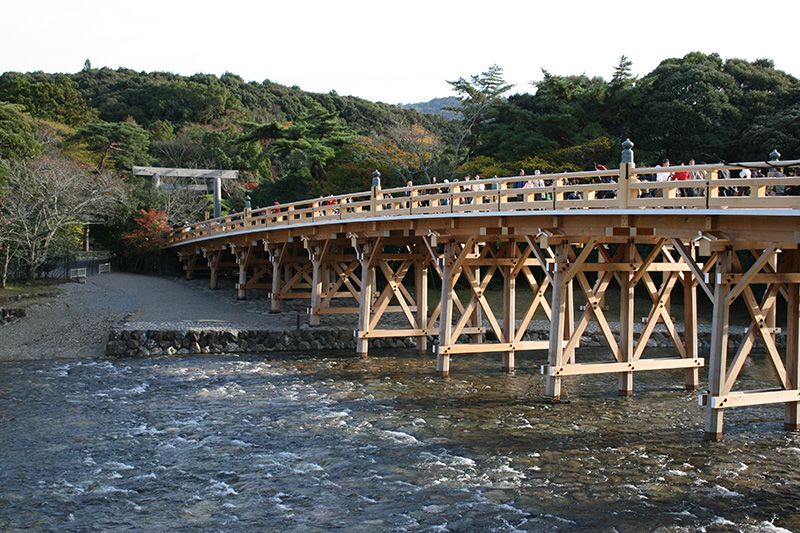 The Uji Bridge and a torii gate at Ise Shrine.

Situated to the north of Shima is Toba, birthplace of Mikimoto Kōkichi, who in 1893 successfully produced the first cultured pearl. Located just offshore in Ise Bay is Mikimoto Pearl Island, a tourist attraction housing a history museum and other facilities related to Mikimoto’s contribution to pearl aquaculture.

Straddling the Kii Peninsula prefectures of Mie, Nara, and Wakayama are the three holy sites of Yoshino-Ōmine, Kumano Sanzan, and Kōyasan. The area is a UNESCO World Heritage site, boasting natural beauty as well as ancient pilgrimage routes and religious complexes.

(Banner Photo: The view of Ago Bay from Kashikojima.)