A Year in the Life of Ise Shrine (Photos)

Culture Lifestyle Jan 1, 2014
The year 2013 was a special one in Ise, as Japan’s most important Shinto shrine was rebuilt from scratch—the latest iteration of a ceremony carried out every 20 years since the seventh century. This selection of photographs by a man who grew up close to the shrine shows the beauty of the four seasons in one of Japan’s most important sacred spaces.

A New Shrine for the New Year

Every 20 years, the main shrine buildings at Ise Shrine in Mie Prefecture, the most important of all of Japan’s tens of thousands of Shinto shrines, are rebuilt entirely. The ceremony, known as the shikinen sengū in Japanese, has been taking place every 20 years since the seventh century. The most recent rebuilding was completed in October 2013, when the two residing deities (kami) were ceremonially moved into their new quarters in the Inner and Outer Shrine buildings at the heart of the shrine precincts. This regular rebuilding has earned Ise Shrine a reputation as the shrine of eternal youth—symbolic of the ever-present, unchanging nature of the divinity. The shrine never looks more vibrant than after a renewal.

In Japan, it is traditional to begin the New Year by visiting a shrine to pray for good fortune in the 12 months to come. Ise Shrine will be a particularly popular choice this year. What better way to mark the New Year than by walking along the gravel paths leading to the ancient-but-always-new shrine at Ise?

I grew up in Ise, where my family ran a small business providing fish for the ceremonial offerings at the shrine. Growing up near the shrine, I got to know at close hand the many faces of the sacred precincts throughout the year. In spring, I used to follow the mejiro (Japanese white-eye) birds that played in the branches of the cherry trees; in summer, I could sense the trees and plants luxuriating in a sudden evening downpour; in autumn, I would enjoy the light streaming through the foliage; and in winter, I would occasionally wake to the wonderful surprise of a rare covering of snow. The sacred grounds of the shrine were home to more pleasures than I could count.

One I loved in particular was the Isuzugawa River—a constant presence through everything, its pure and gentle waters flowing throughout the changing seasons.

The river always reminds me of the awe-inspiring age of this timeless place, the waters flowing unchangingly for more than a thousand years through the sacred precincts of the shrine. The river flows into the sea at Shima, bringing its riches to the ocean, then rises into the heavens to bestow its blessings as rain to the home of the kami.

This is the beautiful natural landscape of Ise, so precious to the Japanese people. 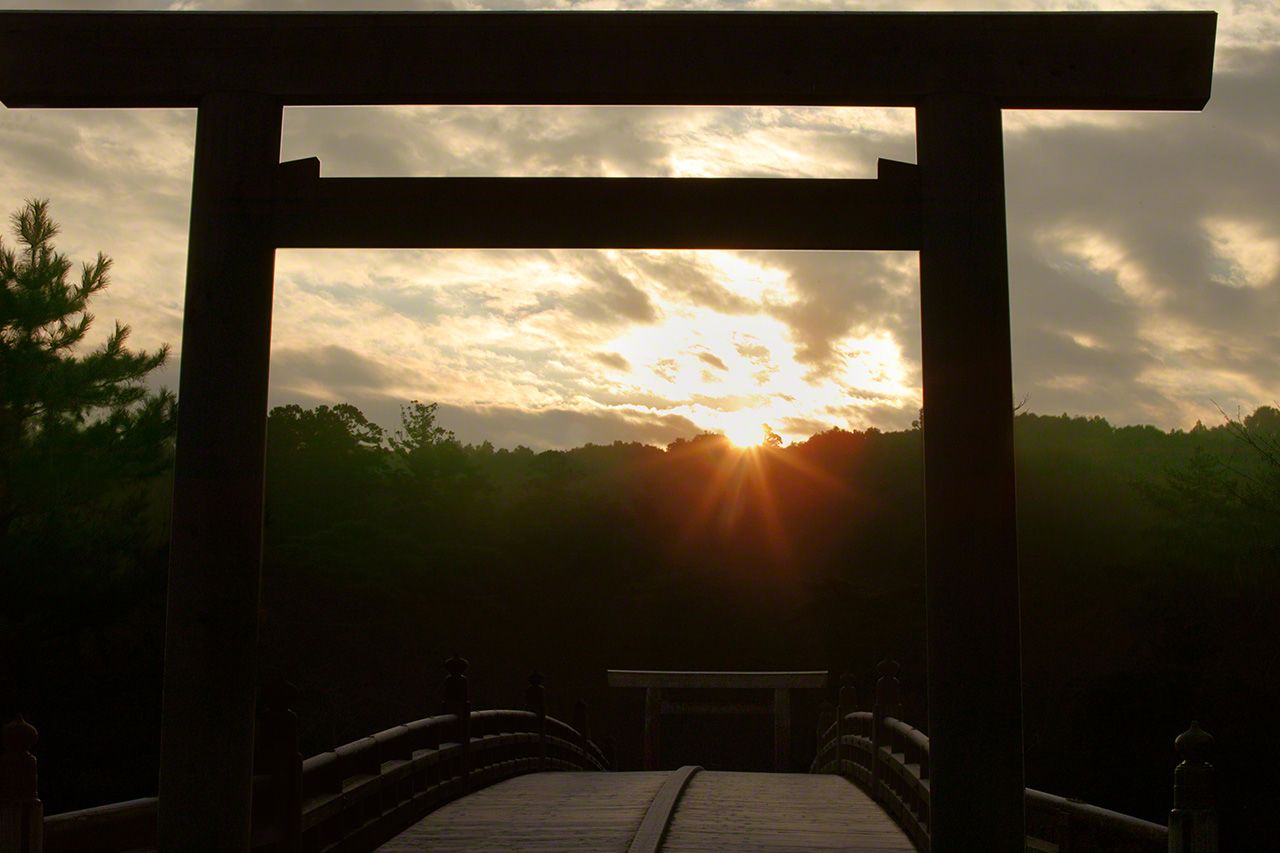 January 1 The first sunrise of the New Year. Crowds of worshipers join their hands in prayer as the sun rises over the Uji Bridge. 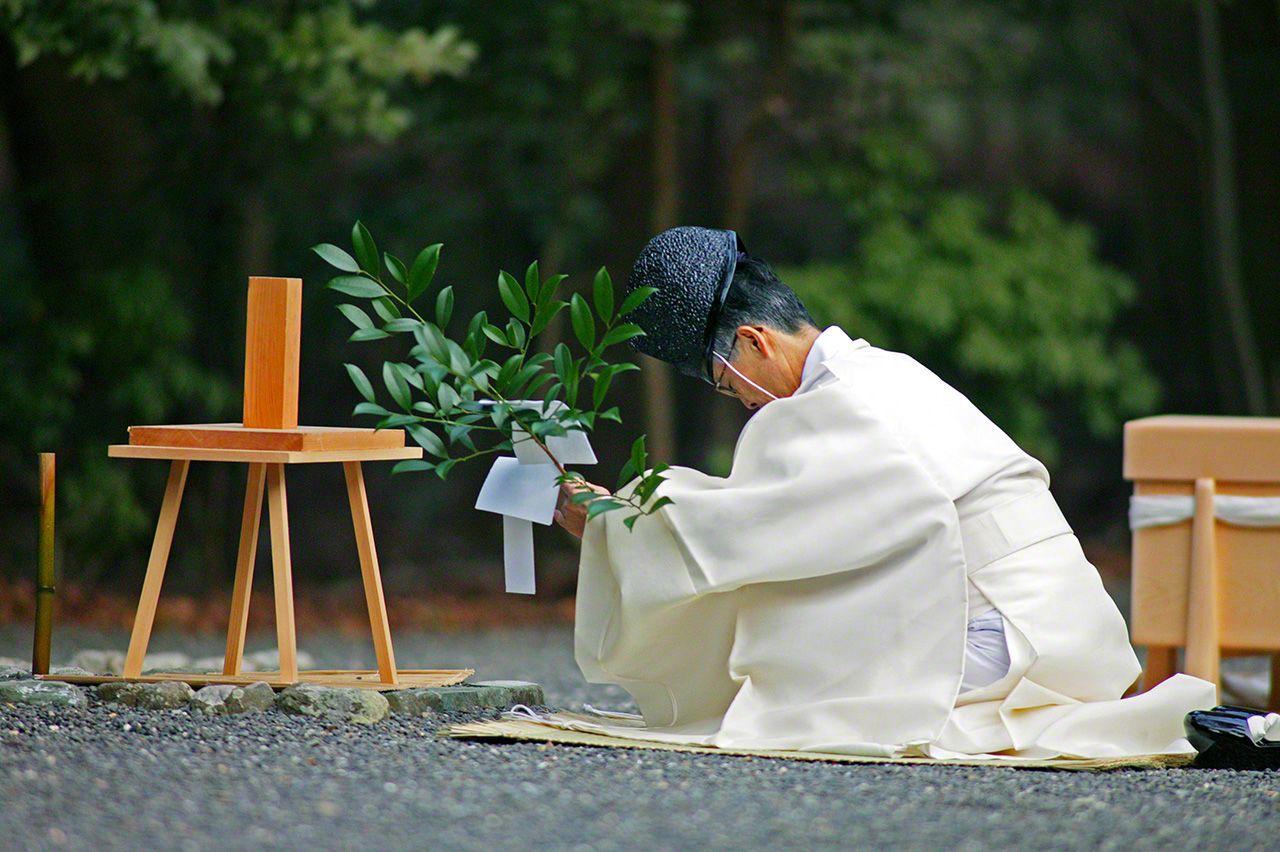 January 7 A priest with a sacred sakaki branch says prayers for the spirit of the Shōwa emperor (Hirohito) in a ceremony held each year on the day of the emperor’s death. 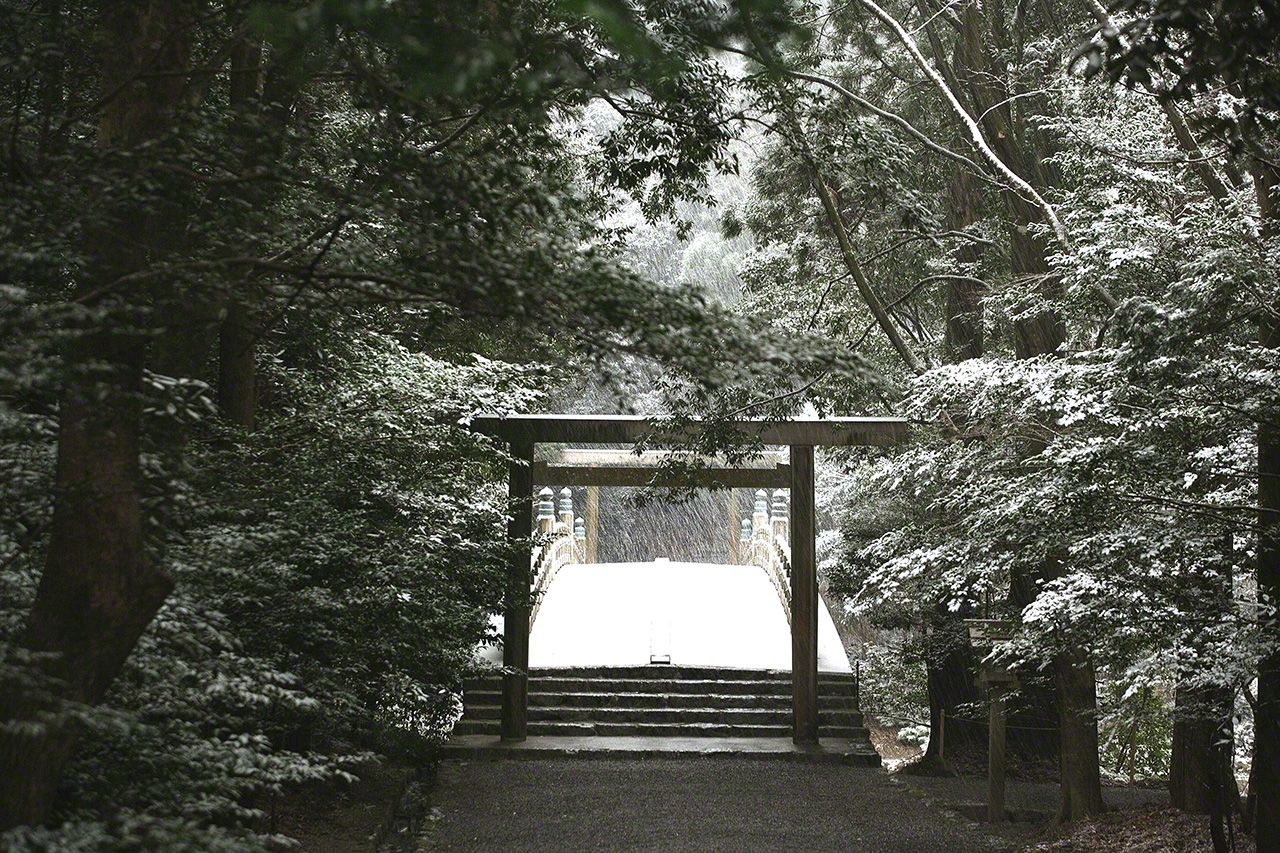 February 9 A rare flurry of snow falls on the Kazahi-no-minomiya Bridge. 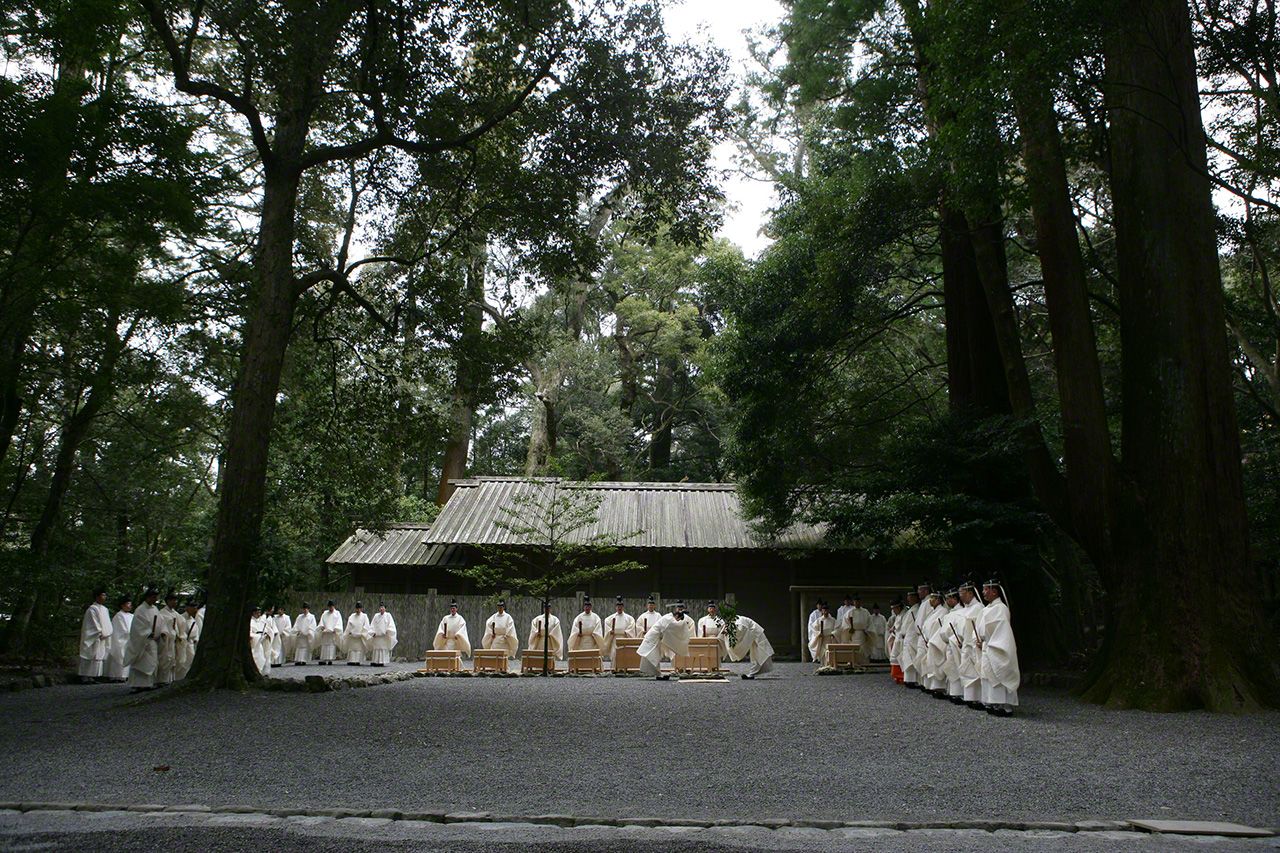 February 17 The Toshigoi no Matsuri festival is held to pray for an abundant harvest. 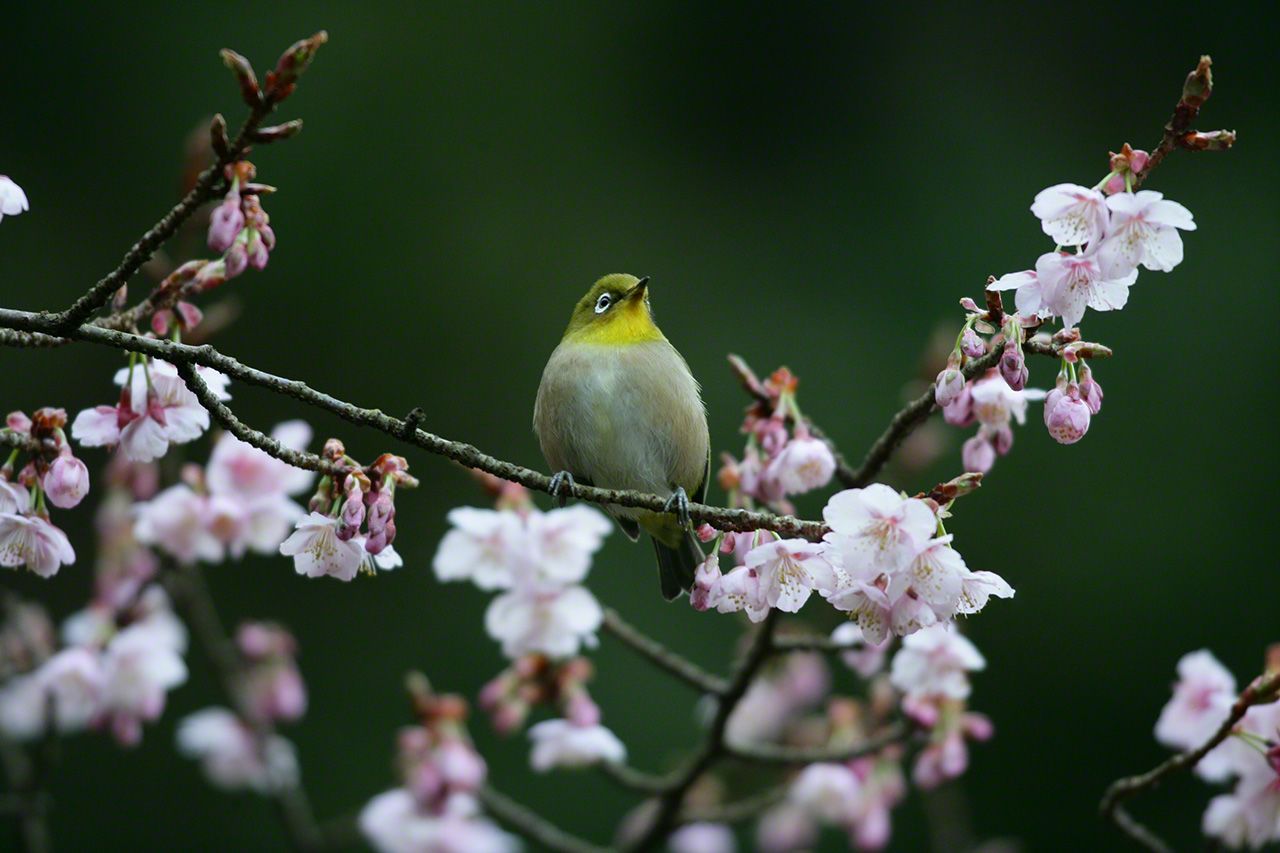 March 19 The Japanese white-eyes appear in the branches of an early-blossoming wild Himalayan cherry tree, as if they have been waiting for it to bloom. 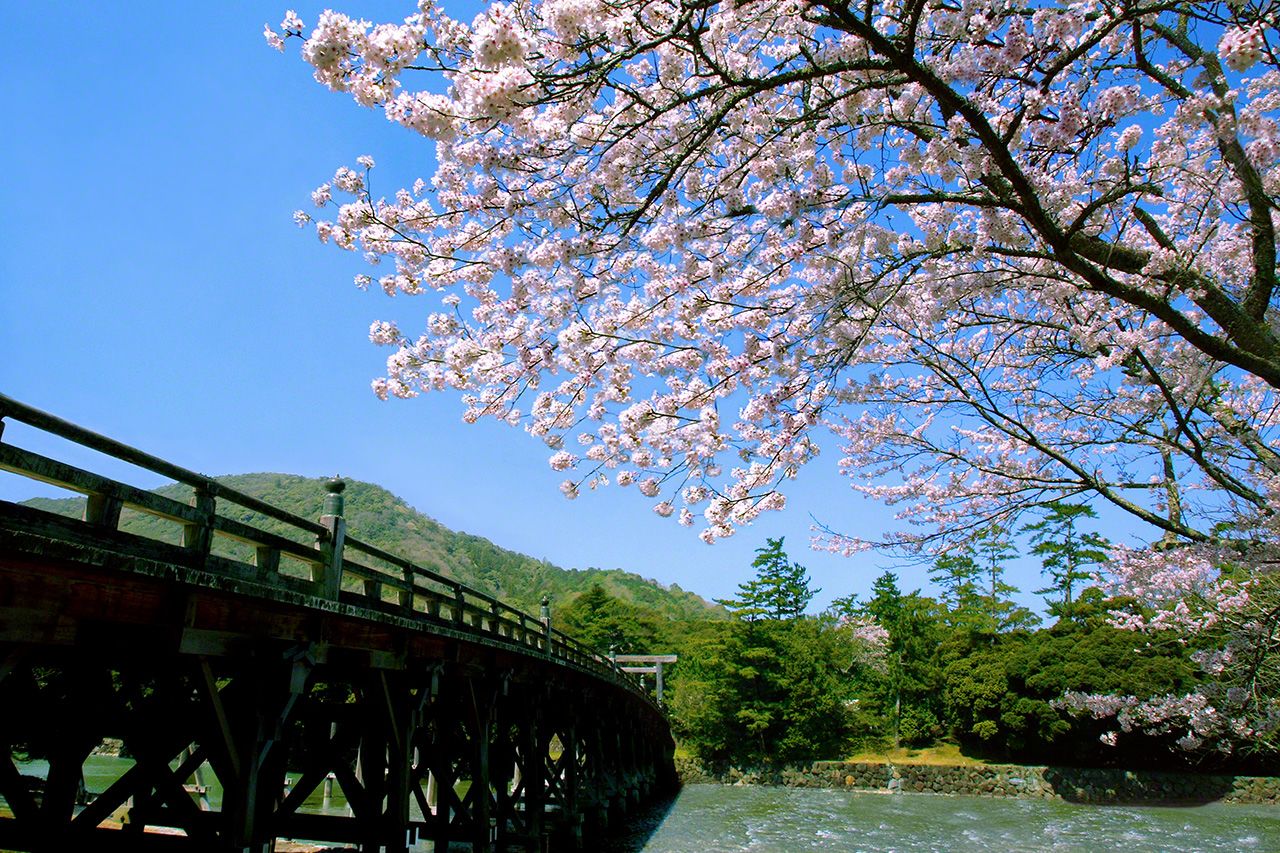 March 28 Cherry blossoms are a welcome sight as you approach the Uji Bridge on a beautiful spring day. 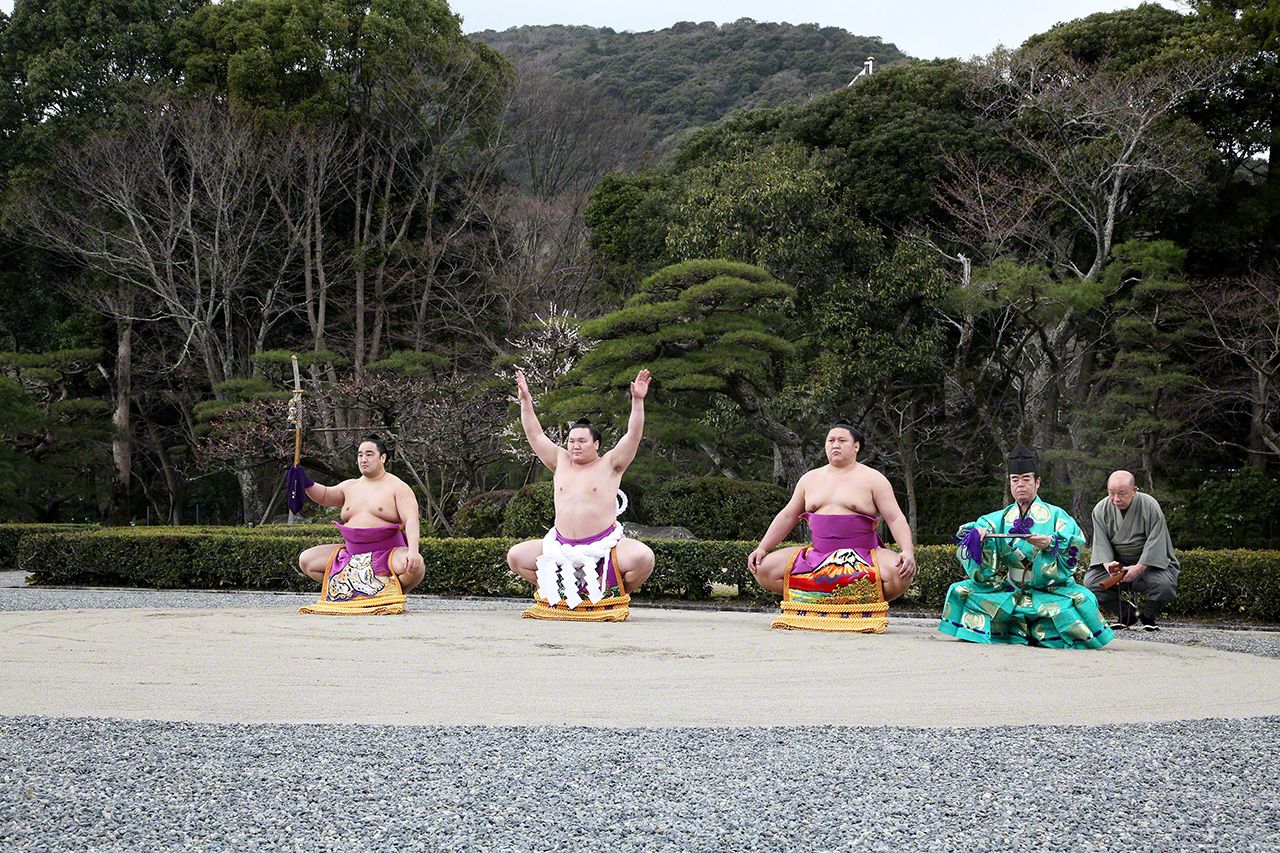 April 1 Sumo wrestlers make their ceremonial entrance. The sport has ancient ties to Shinto, and the tradition of holding bouts in shrines to honor the gods has a long history. 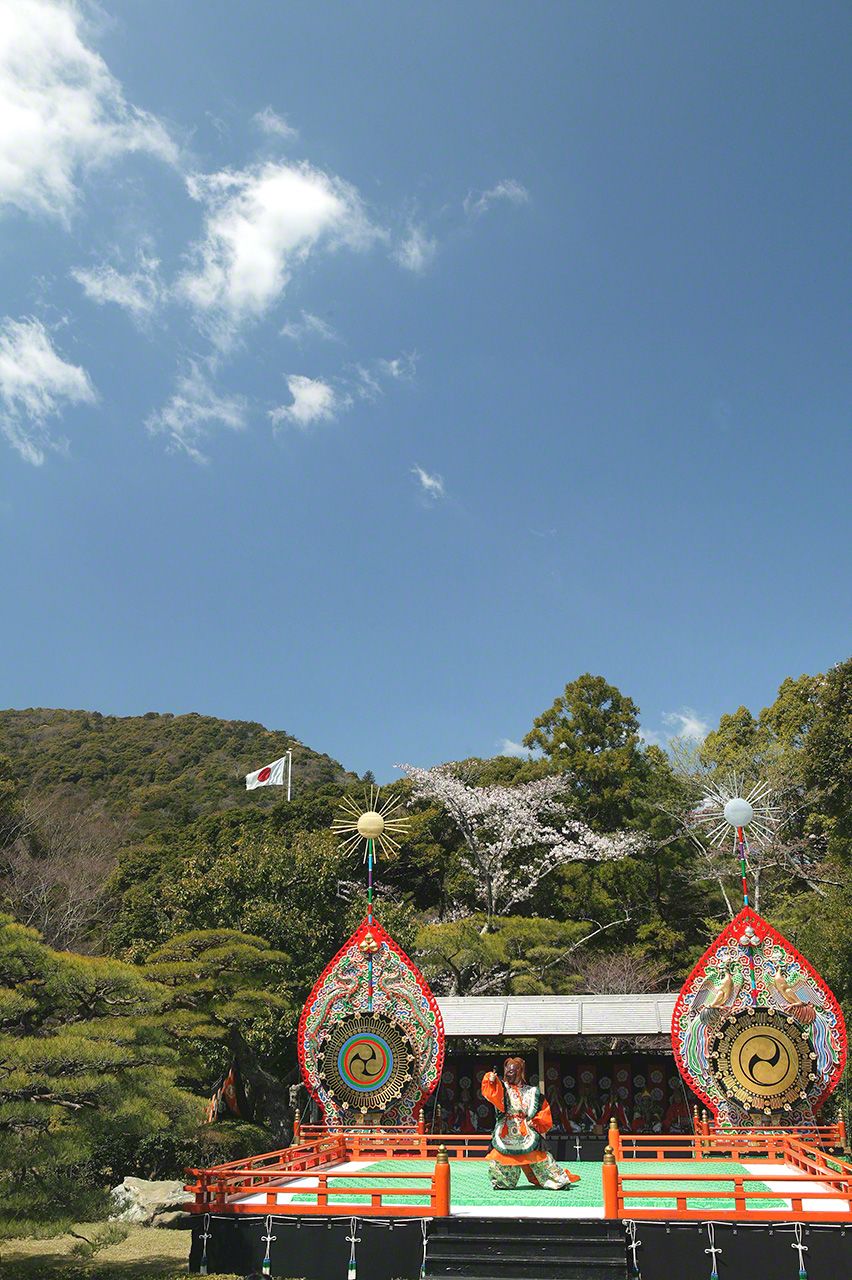 April 28 The spring kagura performance of ceremonial music and dance. Performances of kagura are held several times a year on a specially constructed stage. 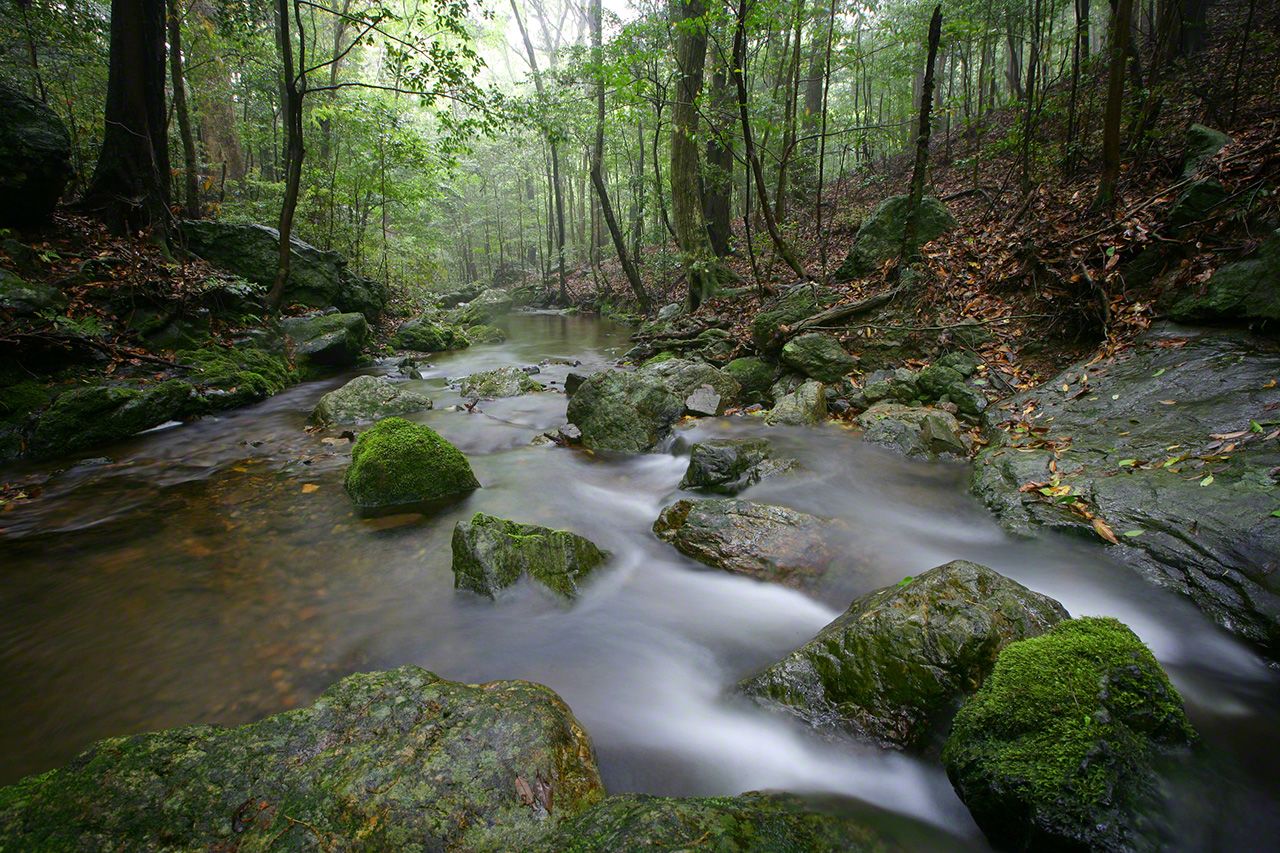 May 5
Upstream on the Isuzugawa River, the pure waters flow through forestland belonging to the shrine. 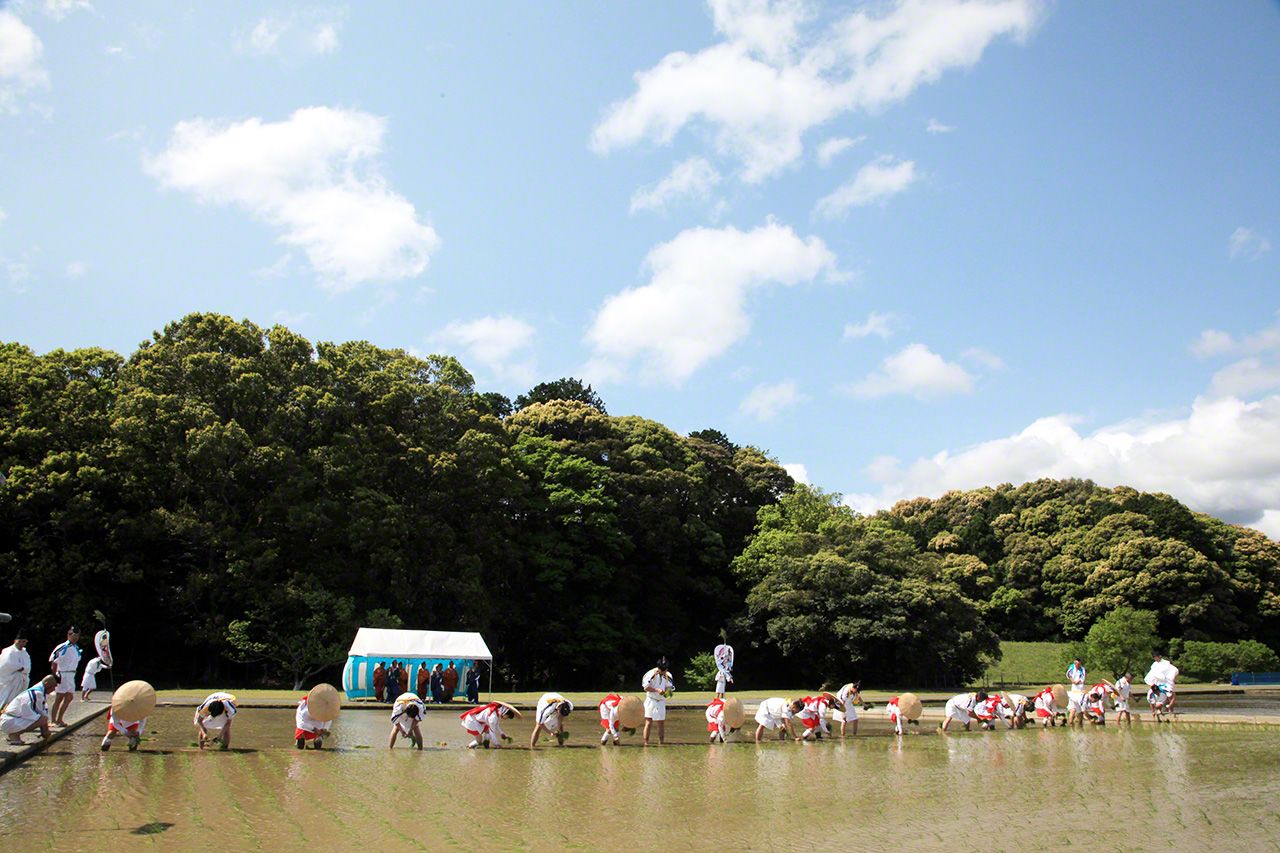 May 12
Ceremonial planting of rice takes place in the paddies that provide sacred rice for rituals at Ise Shrine, accompanied by performances of ceremonial music. 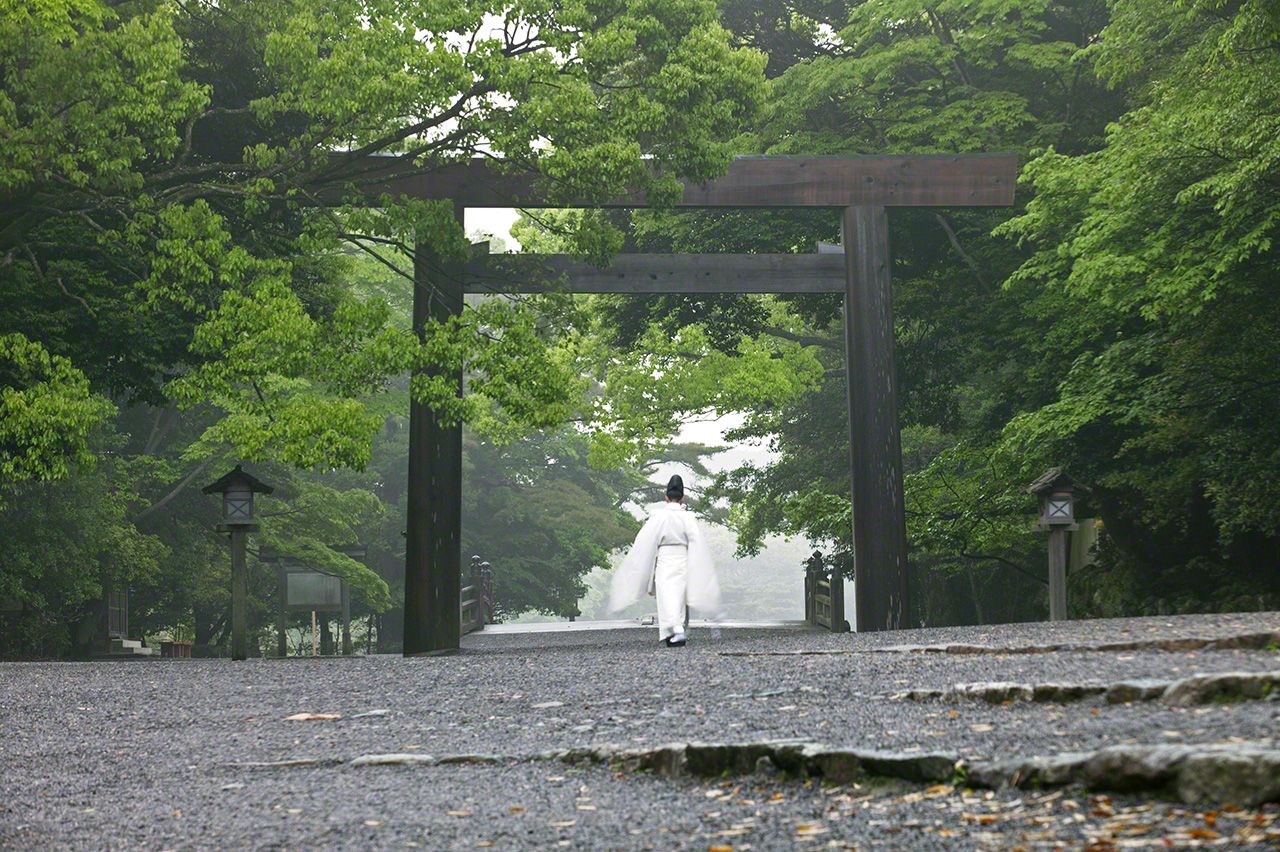 May 16
A priest does the rounds of the sacred precincts every morning, his white robes standing out beautifully against the fresh verdure of spring. 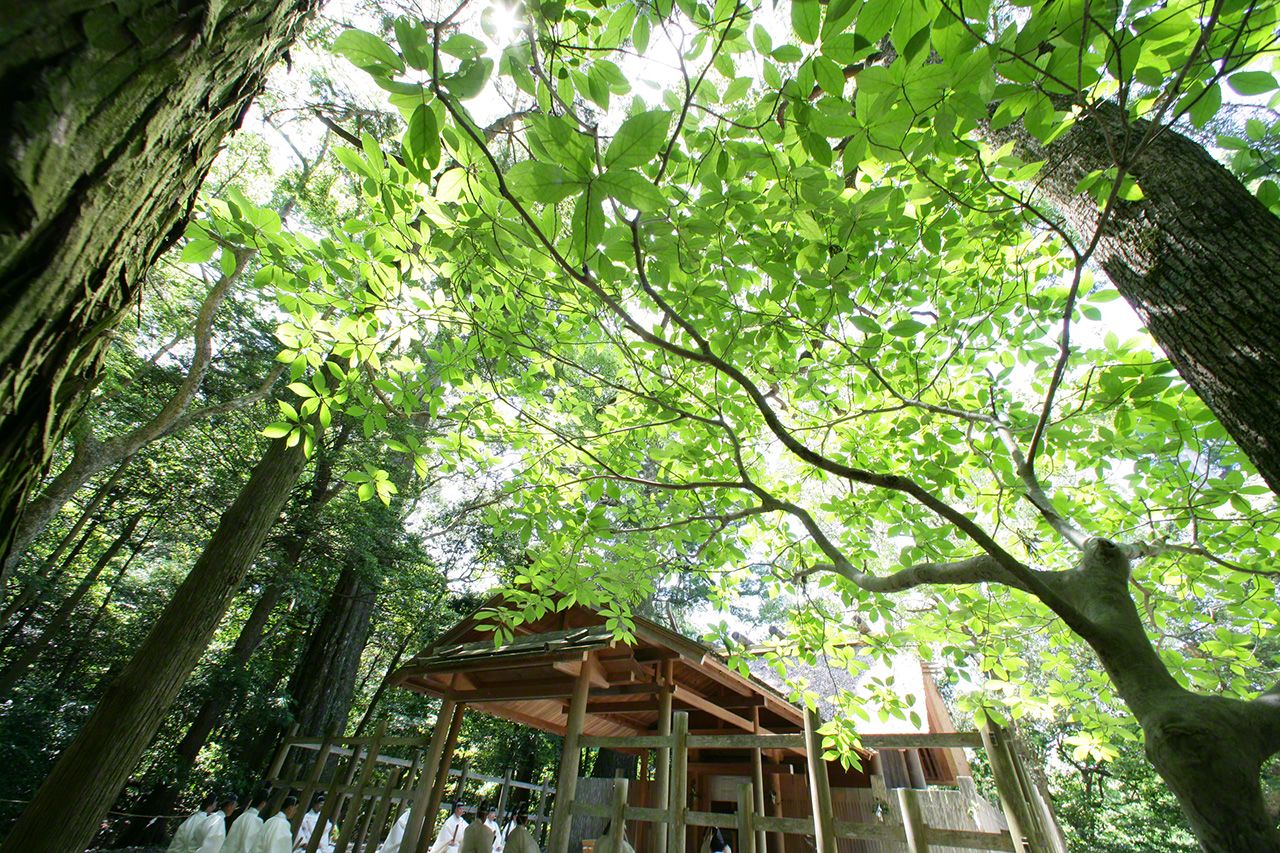 June 16
At the Tsukinami-sai, prayers are said for the prosperity of the imperial family, the safety of the nation, abundant harvests, and national peace. 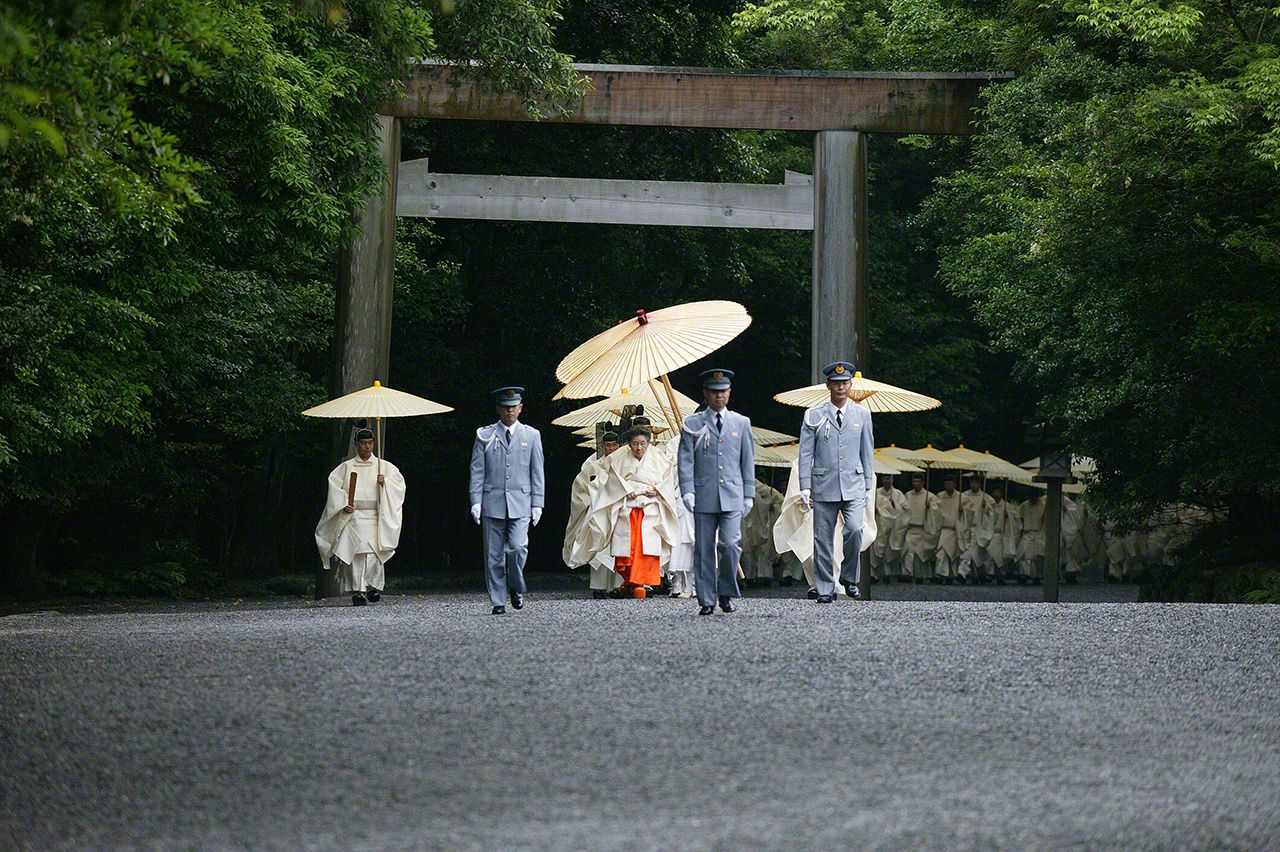 June 17 The Tsukinami-sai takes place in June and December. Along with the Kanname-sai, it is the most important event in the religious calendar. 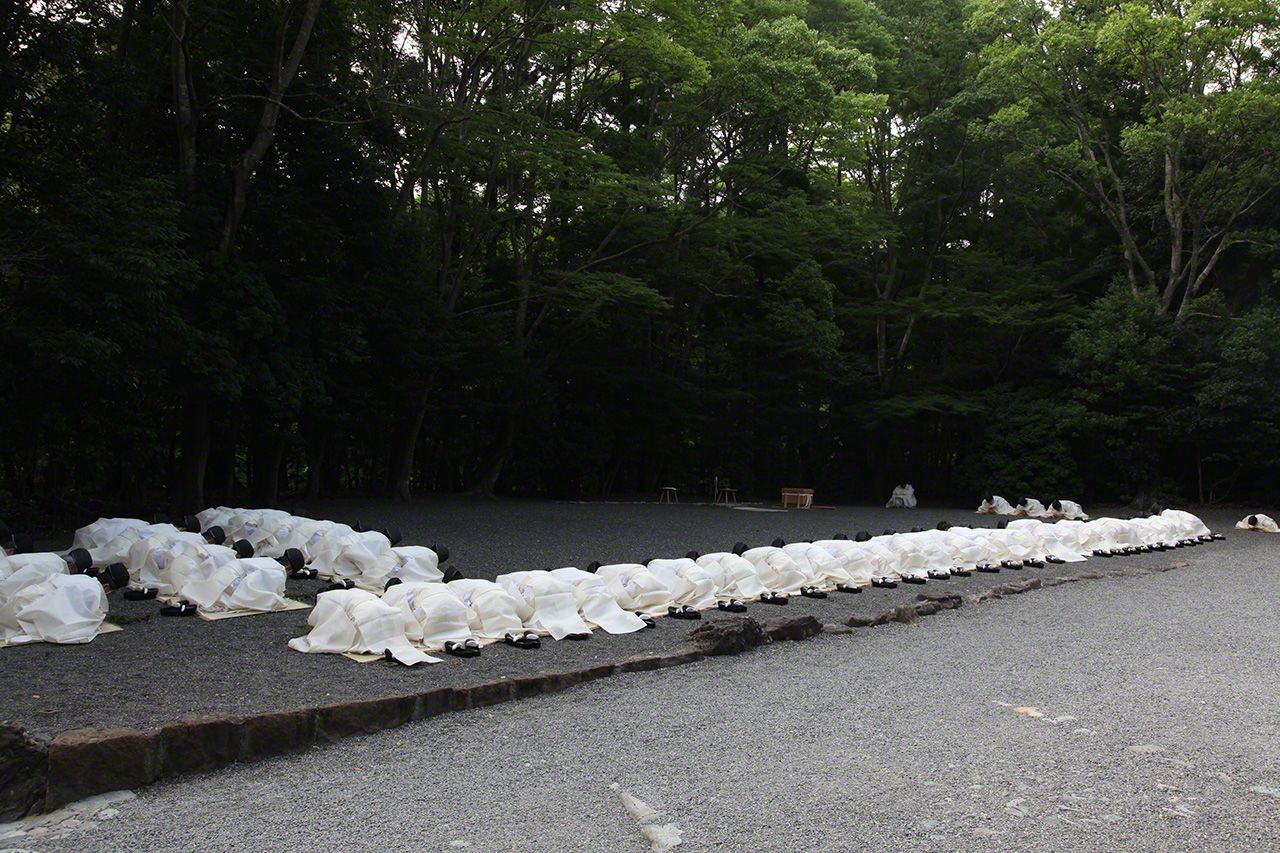 June 30  The priests of the shrine conduct a purification ceremony to wash away sin and impurity. 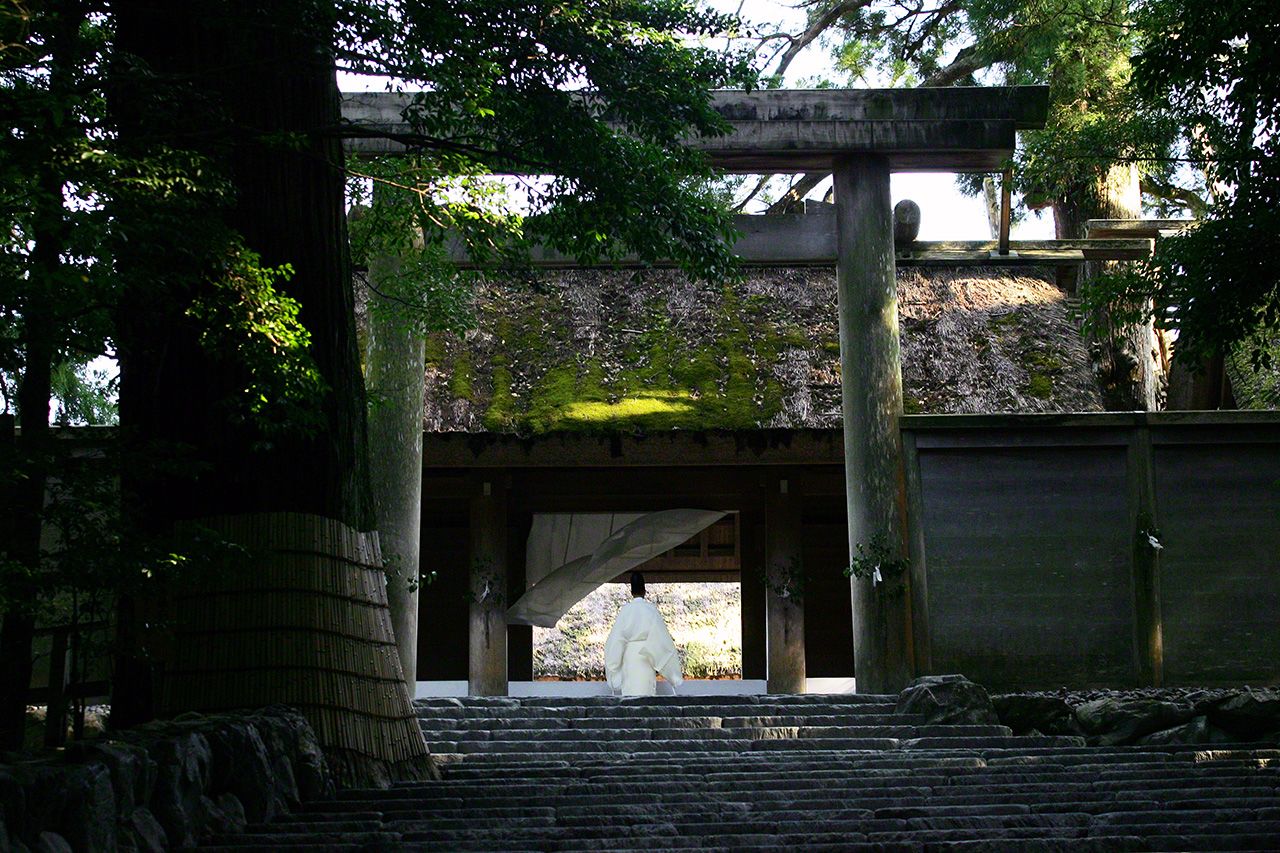 July 1
A curtain hung across the shrine entrance is blown back by a gust of wind as a priest approaches.

July 11
Sacred horses have been a fixture in many Shinto shrines since ancient times. On the first, eleventh, and twenty-first days of each month, the sacred white horse joins in a procession to the bottom of the stone steps before the main shrine building and bows its head. 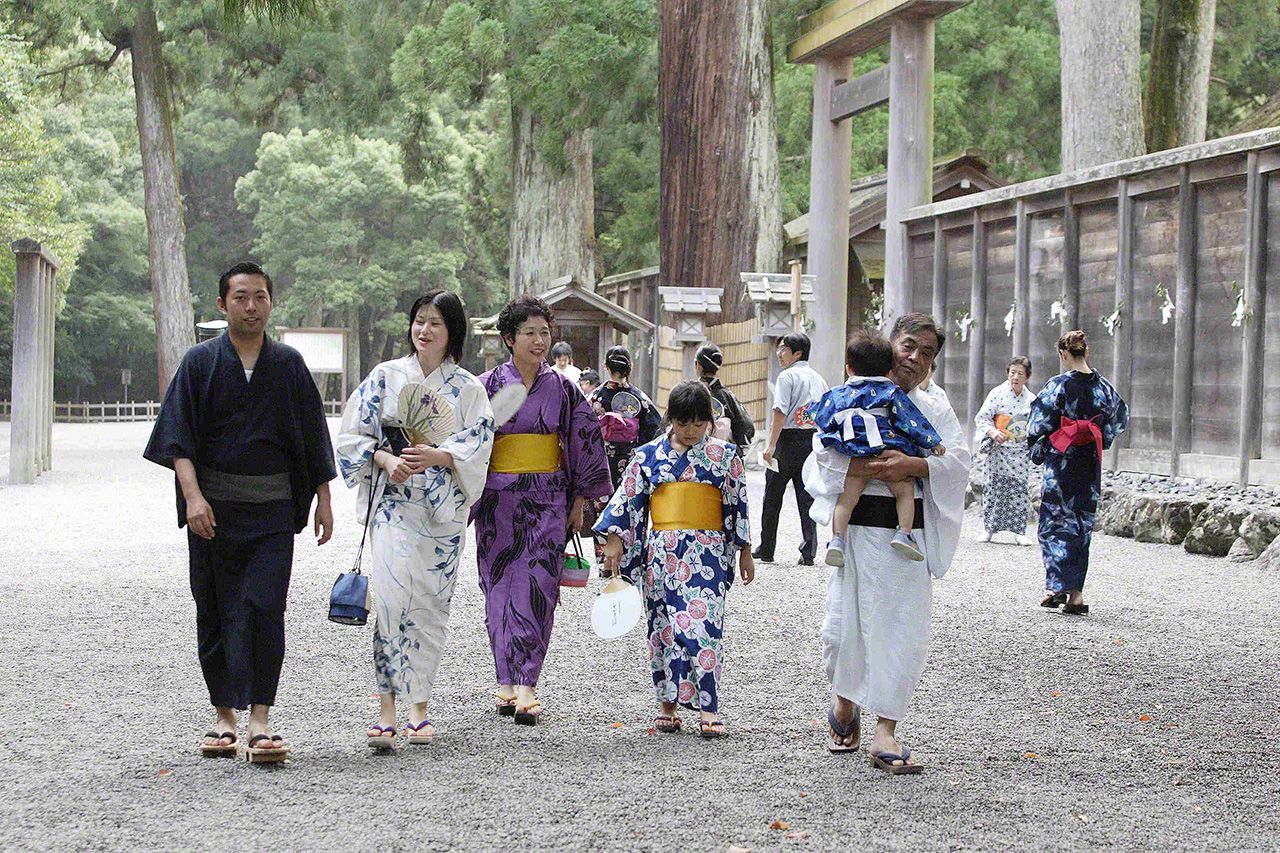 August 1 The shrine is crowded with people in summer yukata paying their respects to the shrine on the occasion of hassaku, the first day of the eighth month when prayers are traditionally said for a good harvest. 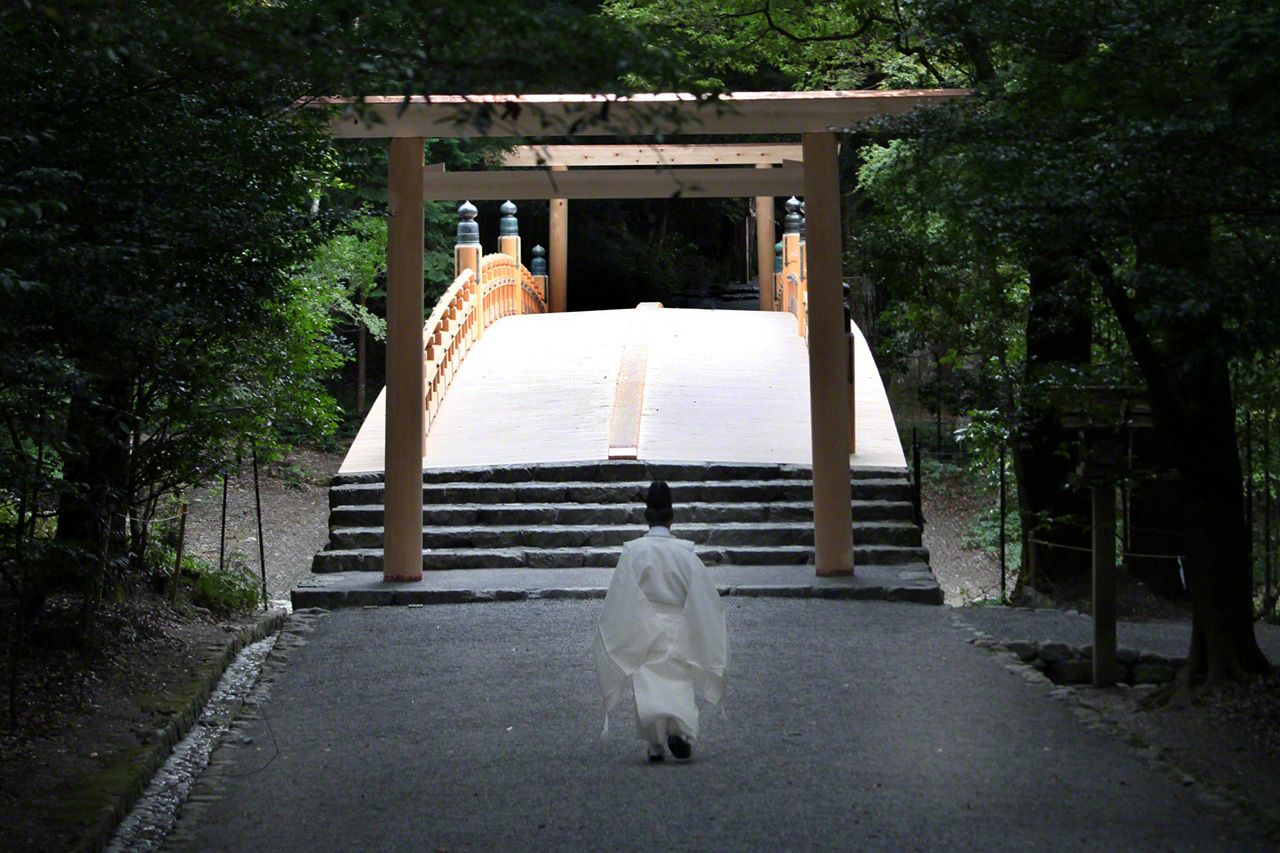 August 25 A priest makes his way toward the newly rebuilt Kazahi-no-minomiya Bridge. 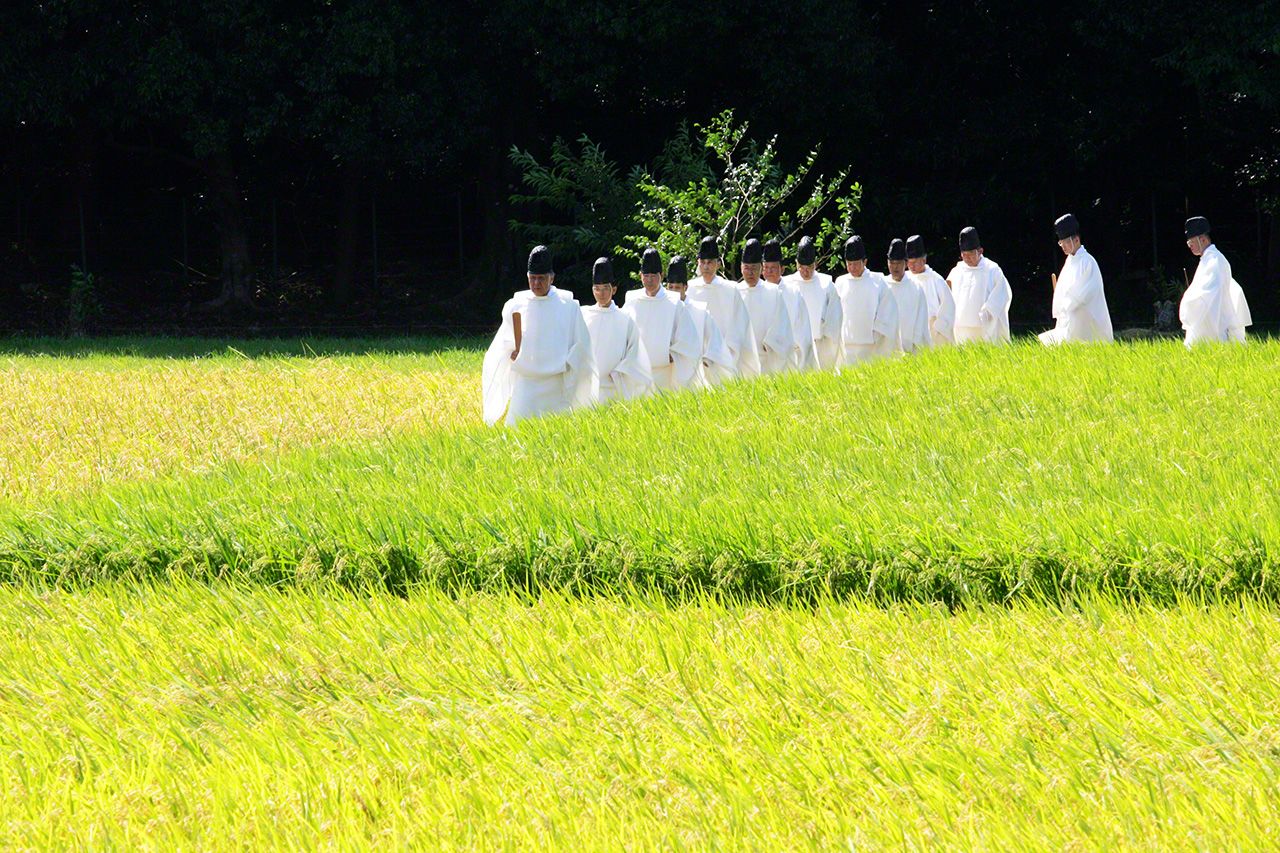 September 5 The Nuibo-sai is a ceremony to harvest the ears from plants in the paddies where rice used in rituals is grown. 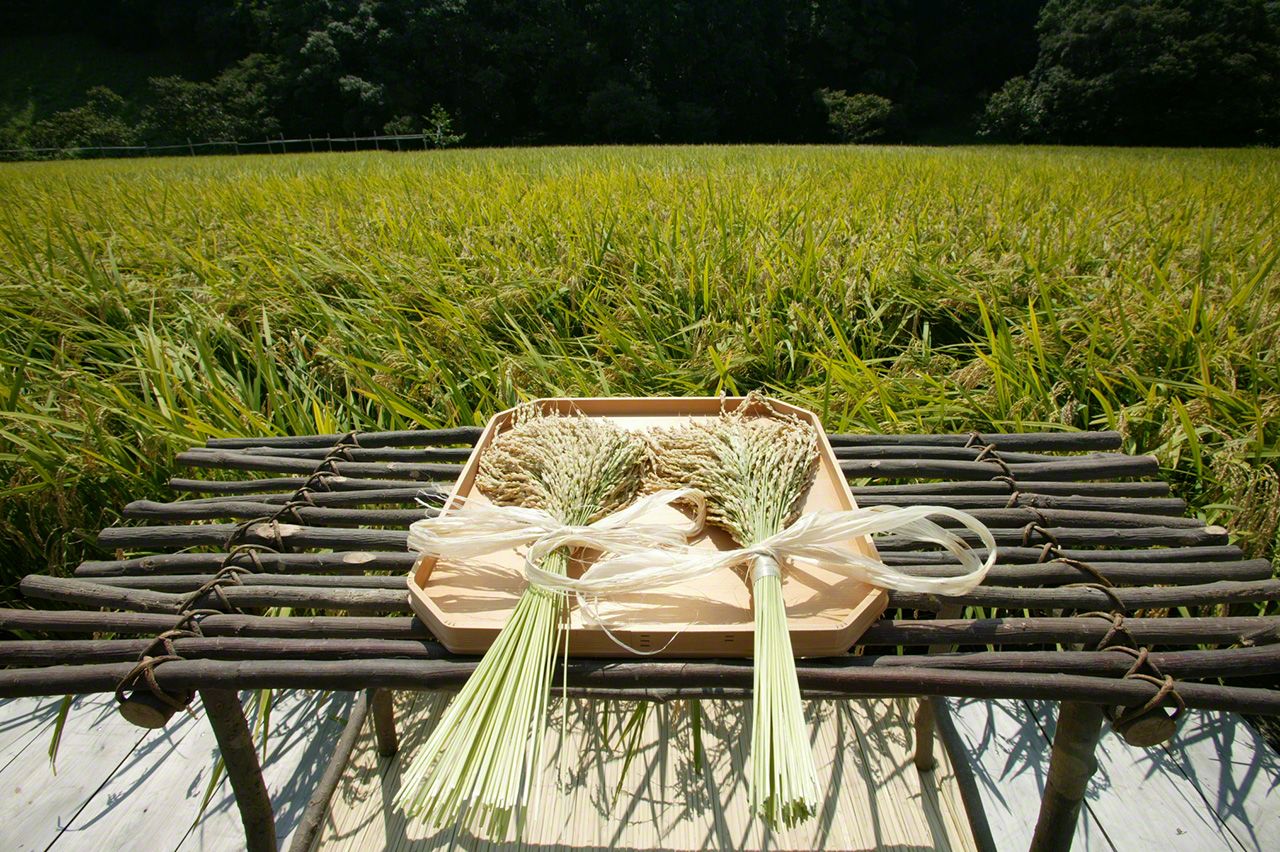 September 5 A priest gives thanks before the harvested ears of rice. 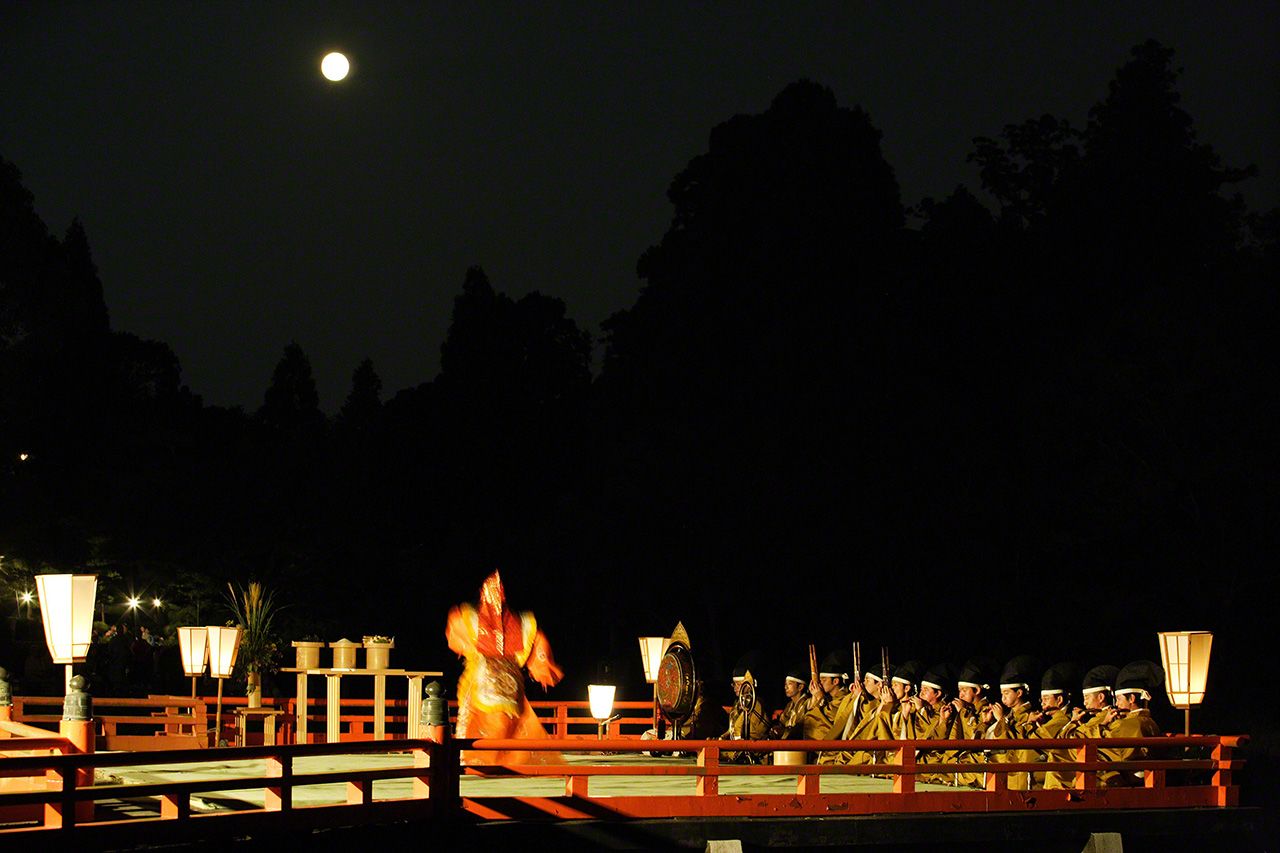 September 18 A performance of traditional music and dance under the mid-autumn harvest moon. 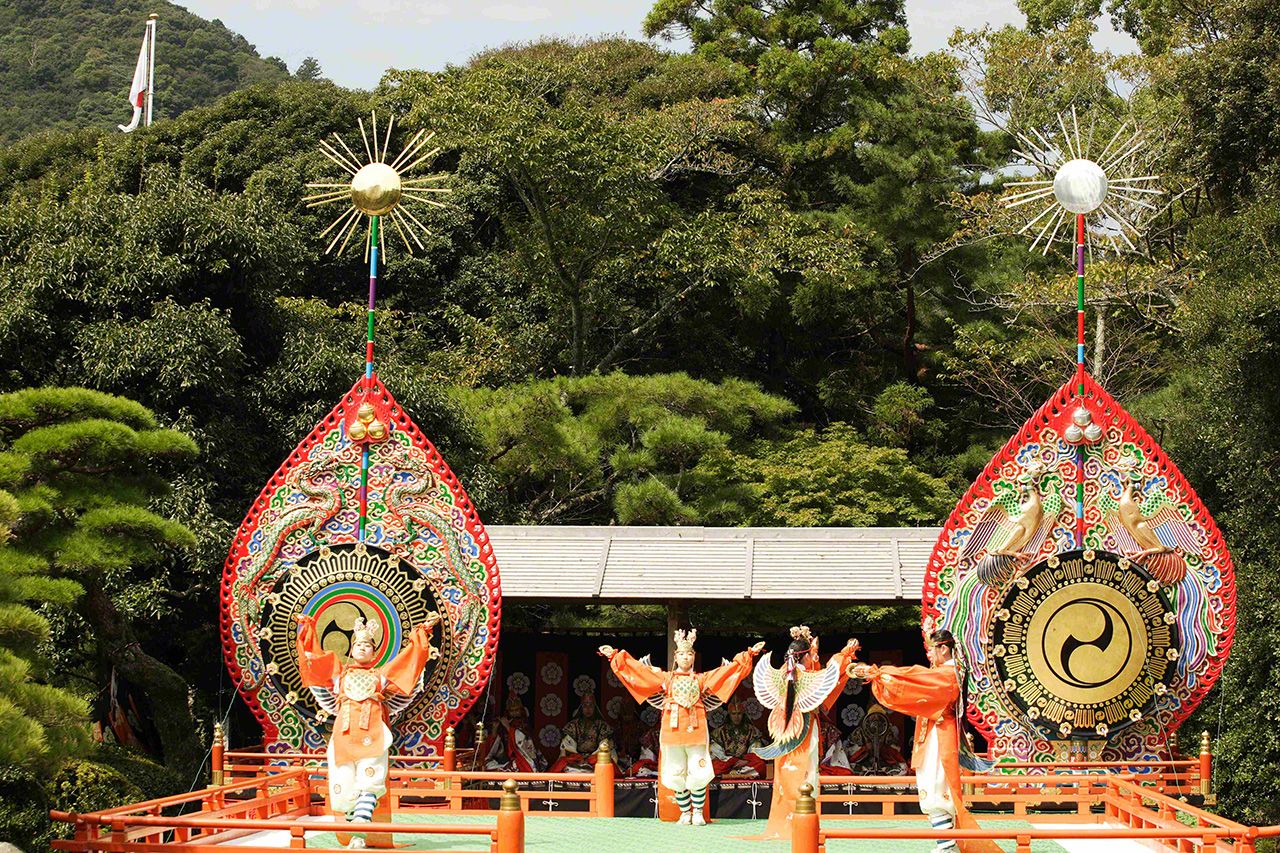 September 23 The autumn performance of kagura. Traditional dances are performed to entertain the kami. 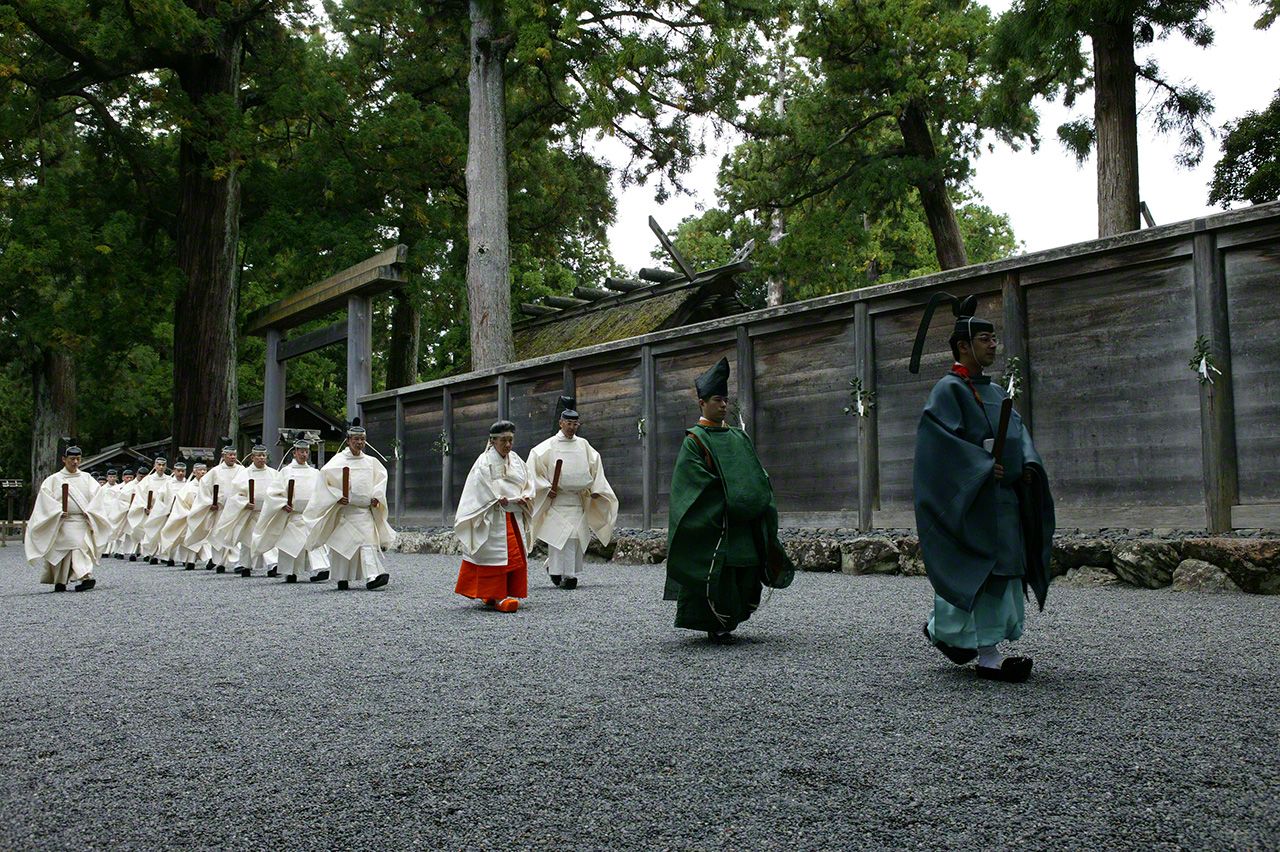 October 16 The Kanname-sai, one of the most important ceremonies of the year. The first rice of the year is offered to the kami in thanks for the harvest. 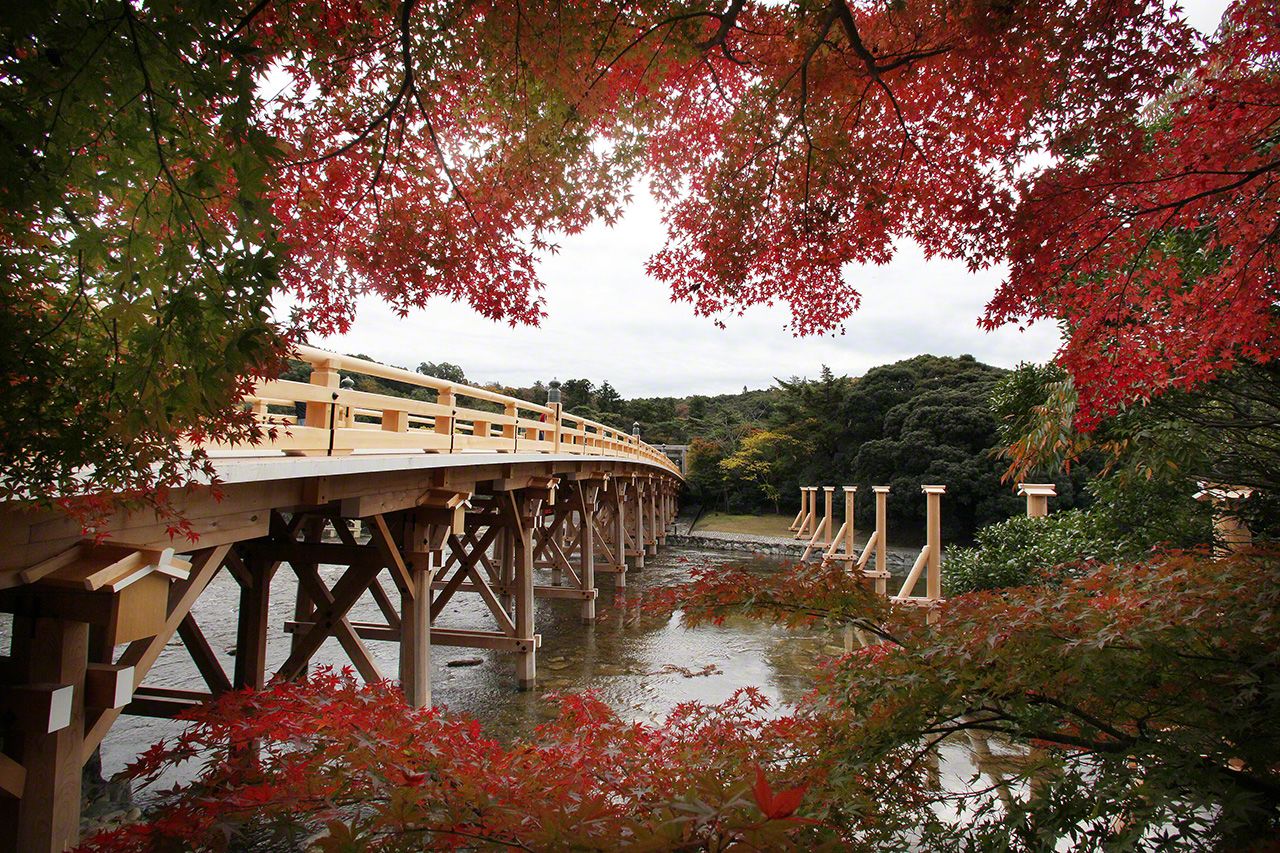 November 19 The Uji Bridge in fall foliage. The bridge marks the boundary between the sacred and profane worlds. 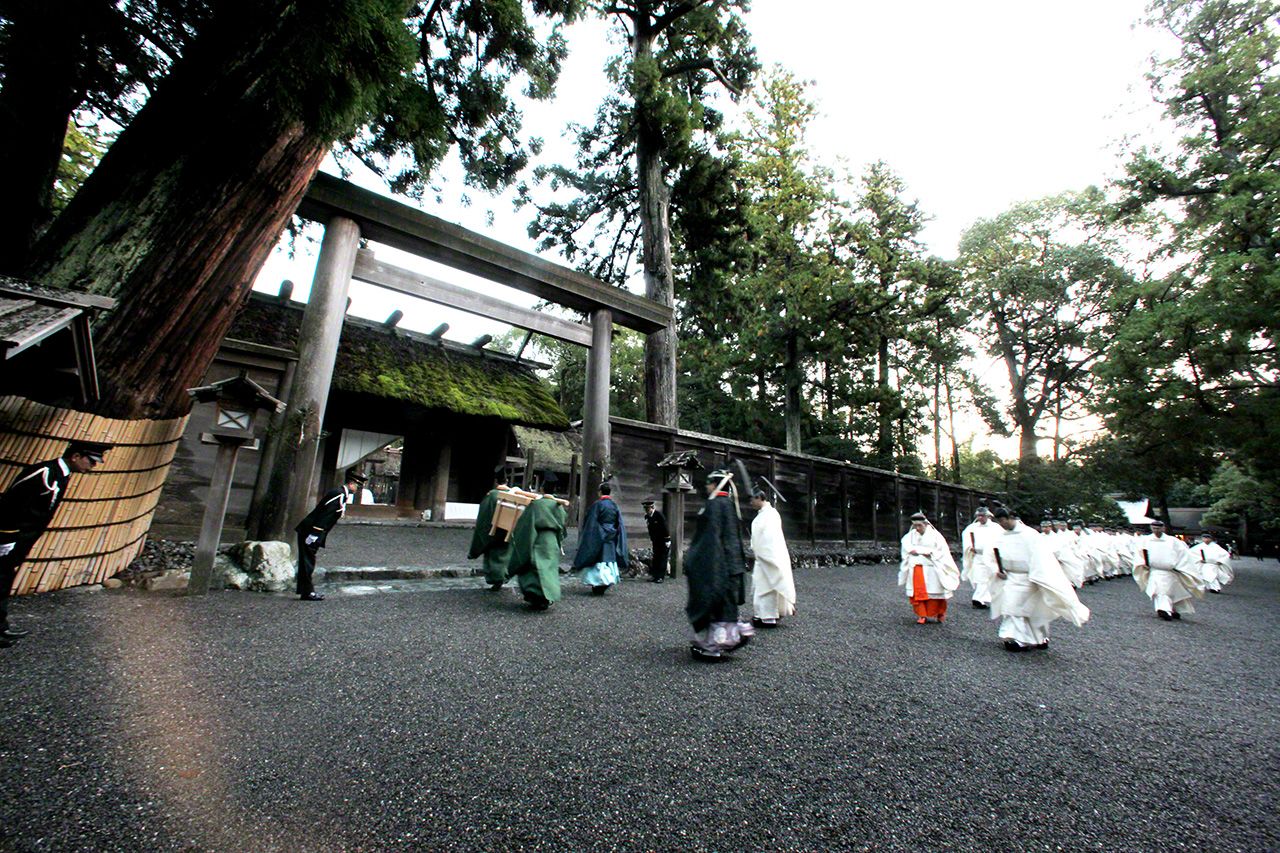 November 23 Niiname-sai. A harvest ceremony in which the emperor himself offers new rice to the gods and partakes of the new rice. 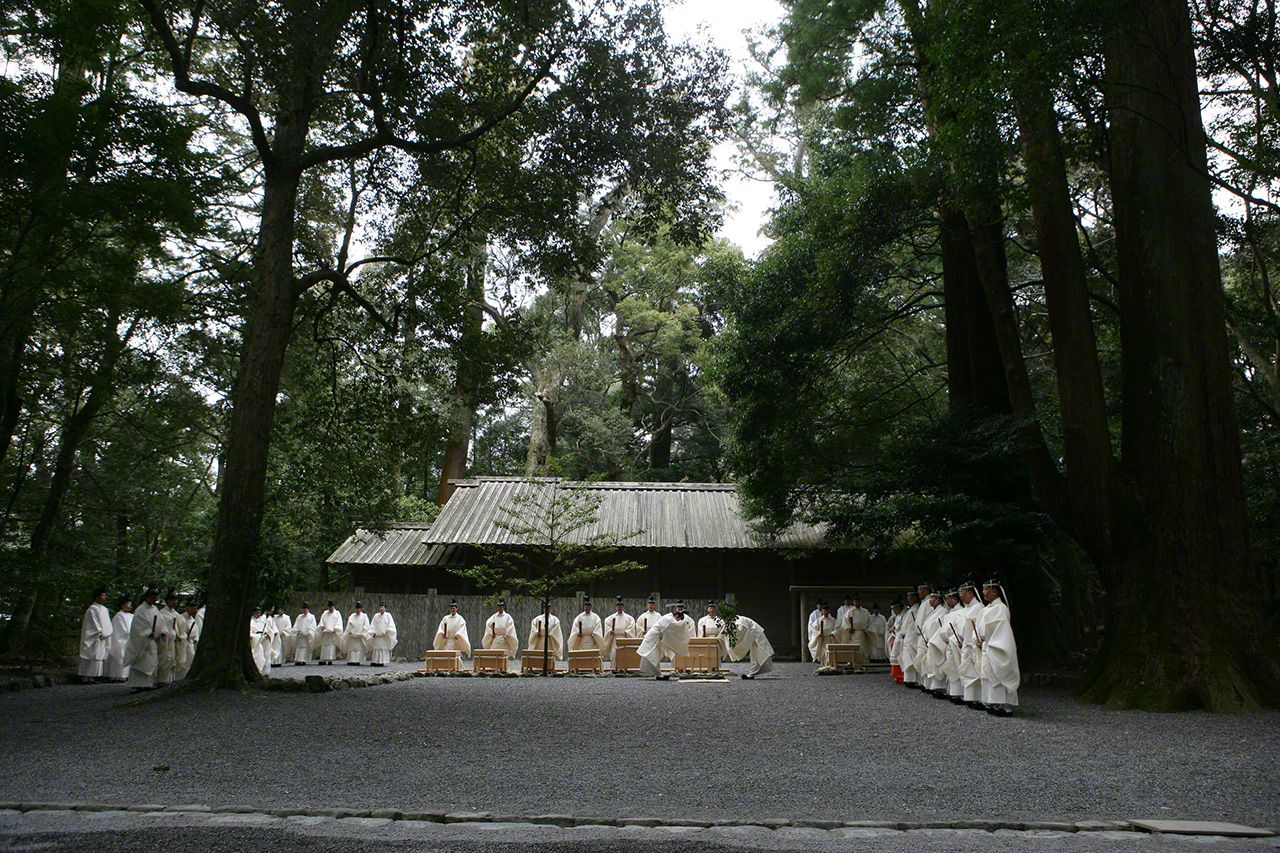 December 17 The December Tsukinami-sai. In front of the Inner Shrine imibi-yaden (the “gods’ kitchen” where rice and other foods are prepared), a priest blesses boxes containing sacred offerings with a sacred sakaki branch.

December 31 The shrine precincts throng with people on New Year’s Eve. Throughout the country, people visit shrines and temples to give thanks for the year just passed and pray for happiness in the year to come.