On September 1, 2015, the Tokyo Organizing Committee of the Olympic and Paralympic Games, headed by former Prime Minister Mori Yoshirō, announced that it was retracting the official Olympic emblem and would be selecting a new one by public competition. The emblem had led to much controversy since its unveiling on July 24, including a lawsuit claiming that it resembled the logo of a Belgian theater and allegations that the designer had copied or plagiarized other people’s designs in earlier works. As Mutō Toshirō, director general of the organizing committee, explained, the committee concluded that it could not get the support of the general public for the emblem in question.

The scrapping of an already announced Olympic logo is virtually unheard of. A great deal of confusion will likely ensue, given that corporate sponsors of the organizing committee had already been using the design in advertisements and elsewhere.

It was only recently that plans for a new national stadium, the main venue for the 2020 Summer Olympic Games, were thrown out the window amid heavy criticism for the projected costs, scale, and other aspects of the project. The added fiasco of the emblem going down the drain threatens to mar the image of the games.

The scrapped emblem was designed by Sano Kenjirō, a 43-year-old graphic designer and professor at Tama Art University. Similarities to the logo of the Théâtre de Liège in Belgium became the talk of the Internet soon after the emblem was unveiled, and the designer of the theater logo filed a lawsuit demanding that the International Olympic Committee stop using Sano’s design.

At an August 5 press conference, Sano flatly denied any plagiarism. But in mid-August new allegations were raised—that the prints on several of the tote bags that Sano’s office had designed for a promotional campaign by Suntory Beer looked suspiciously similar to preexisting material in Japan and overseas. Suntory Beer halted shipping of the bags in question, while Sano admitted that some of the bag designs had been copied off of other people’s work and issued an apology. But the debate over the originality of Sano’s work only intensified with time, as people continued to seek out similarities between his earlier works and other creators’ designs.

On August 28 the organizing committee held a press conference to explain in detail the process of selecting and finalizing the official Olympic emblem. Noting that the initially submitted design was not at all like the logo of the Belgian theater, it reiterated its view that Sano’s design was original. 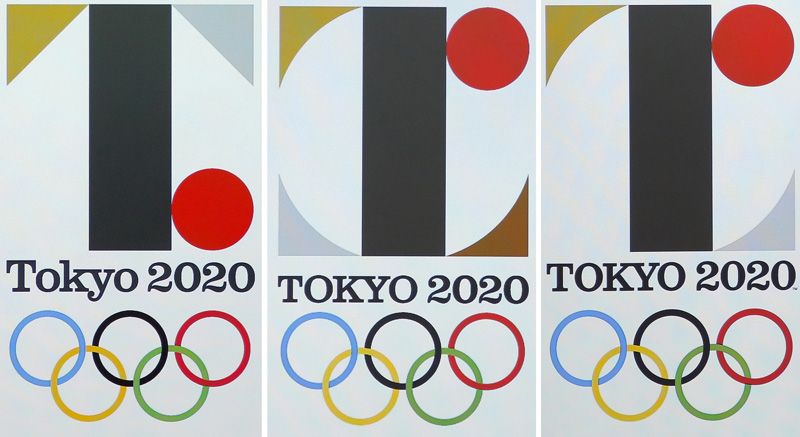 But the initial design quickly came under fire as well; someone pointed out that it resembled the design of a poster for an exhibition about the typographer Jan Tschichold, held in Tokyo in 2013. It also became clear that Sano had used pictures taken from other sources without permission to make composites that he submitted to the organizing committee showing how the emblem might be displayed in public.  The committee decided to rescind its earlier position and scrap the logo.

Sano, while admitting to having used the images without permission, categorically denied that he had copied or plagiarized other designs in creating the emblem. Nonetheless, he agreed to withdraw the design because he “could not allow the current situation to continue any longer.”

The organizing committee also decided to pull the Paralympic emblem that Sano had designed for the 2020 games.

(Originally written in Japanese and published on September 2, 2015. Banner photo: On the evening of September 1, 2015, a Tokyo government employee takes down posters for the 2020 Summer Olympic and Paralympic Games at the Tokyo Metropolitan Government Building following the emblem’s withdrawal. © Jiji.)