The Sinking of the “Ertugrul”: Japan and Turkey Mark the 125th Anniversary of the Tragedy

Few Japanese know of the sinking of an Ottoman naval vessel 125 years ago off the coast of the Kii Peninsula. Yet selfless efforts by Japanese locals to rescue and care for the vessel’s crew earned lasting goodwill in Turkey, the seat of Ottoman power. Reinforcing this sense of camaraderie was the shared circumstance of enduring unequal treaties imposed by Western powers. 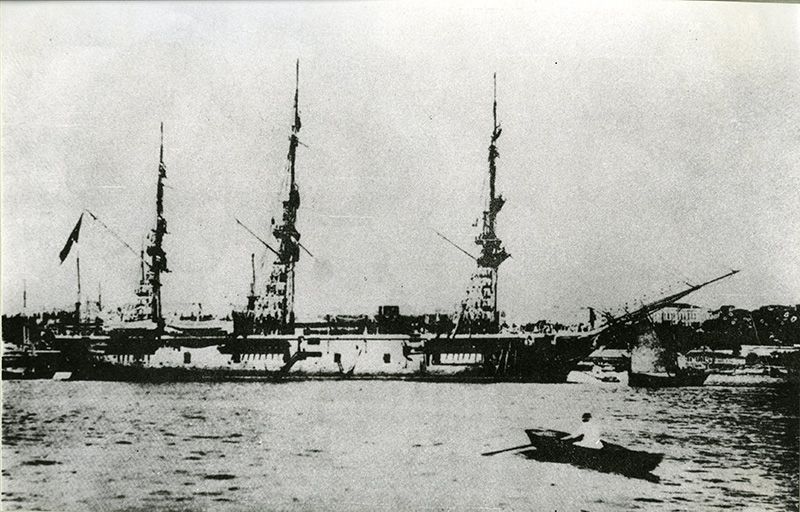 The Ertugrul at anchor in Constantinople in an undated photo.

Ottoman monarch Sultan Abdul Hamid II was deeply impressed by Japan’s rapid modernization following the Meiji Restoration of 1868. His government approached Japan in the hope of forging ties of friendship; to which the Meiji government responded by dispatching Prince Komatsu-no-miya Akihito to Constantinople in 1887 to affirm its mutual sentiment. The Ottomans continued the exchange by sending the frigate Ertugrul on a goodwill visit to Japan in July 1889.

Heading the Ottoman mission was Admiral Ali Osman Pasha. He and his crew of over 600 sailors and officers arrived in Yokohama aboard the 2,344-ton, 76-meter Ertugrul in June 1890 after a long and trouble-prone voyage. While in Japan, the admiral received an audience with Emperor Meiji, presenting the monarch with gifts and bestowing prestigious titles of the Ottoman Empire. 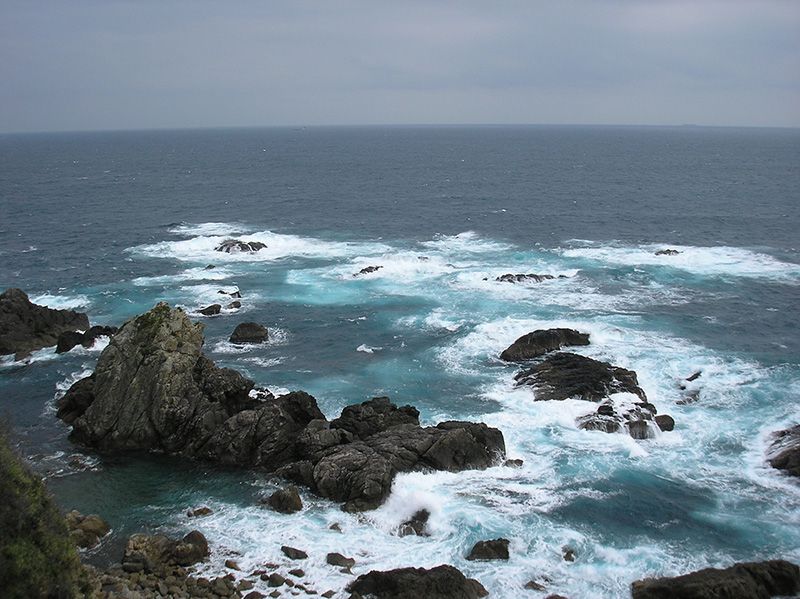 Wakayama’s rocky coast near the site where the Ertugrul sank.

After a three-month stay, the Ertugrul set sail from Yokohama on its return voyage on September 15. During its call the contingent had lost several crew members in a cholera outbreak, but worse still awaited the ill-fated mission. The Ertugrul encountered a typhoon a day out of Yokohama. Tossed by wind and waves throughout the night of September 16, the vessel ultimately broke up on rocks off the island of Kii Ōshima in the present-day town of Kushimoto, Wakayama Prefecture.

Five hundred eighty-seven sailors and officers perished, including Admiral Ali Osman Pasha and the ship’s captain. Kii Ōshima islanders braved the typhoon, making frantic efforts to save 69 members of the vessel’s contingent. Word of their heroic deeds soon reached Turkey, where it elicited an effusion of pro-Japanese sentiment. That sentiment has endured, inspiring a cinematic dramatization of the incident—a joint Turkish-Japanese production—which will open in theaters in both nations this December.

Prompting the Ottoman goodwill mission to Japan, half a world away, was a sense of shared destiny. The Ottomans, like the Japanese, were a proud people. Also like the Japanese, they had lagged behind their Western counterparts in industrial and economic development. And both had endured the humiliation of unequal treaties imposed by Western powers.

Another marine disaster off the Kii Peninsula four years prior to the Ertugrul sinking had heightened Japanese perceptions of Western discrimination. In that incident, a British cargo vessel, the Normanton, sank in a storm en route from Yokohama to Kobe in October 1886.

The 240-ton Normanton was carrying 38 crew members and 25 passengers. Its British captain and all 25 of the other European crew members—British and German—boarded lifeboats and made their way to safety. Conversely, the 25 passengers—all Japanese—and the 12 Asian crew members—Indians and Chinese—perished at sea.

Japan’s Meiji government leaders were aghast at the discrepant fates of the Europeans and Asians aboard the Normanton. However, the unequal treaties they had signed with Western powers denied them the right to bring the captain and crew to trial. The British held a hearing at their consulate in Kobe at the insistence of the Japanese. Its findings, six months after the fact, resulted in a slap on the wrist for the captain and a total exoneration for the other European crew members.

The outcome of the hearing occasioned outrage in Japanese society. People called on their government to rescind the treaty provisions that imparted judiciary powers to Western nations’ consulates. The public reaction was so vociferous as to greatly discomfit the Meiji government. Britain eventually concluded a treaty with Japan in 1894 that acknowledged the authority of Japanese courts to try British subjects, and other Western powers followed suit.

Japanese maritime officials had urged the captain of the Ertugrul to postpone the ship’s departure. Typhoon season was under way, and the seaworthiness of the 26-year-old wooden vessel was a concern. A series of incidents during the Ertugrul’s long voyage to Japan had necessitated makeshift repairs, and Japanese officials beseeched the captain to extend his stay and to secure thorough repairs for the hull and other parts of the vessel in need of fixing.

The Ertugrul’s captain and officers rejected the entreaties of Japanese officials, feeling that delaying their departure would betray weakness and shame the empire, which they saw as the upholder of Islam. As scheduled, they piloted the Ertugrul out of Yokohama on September 15 for its final and fateful journey.

After the frigate broke apart, 69 crewmembers were able to find salvation by following the beam of the Kashinozaki lighthouse, which stands at the eastern tip of Kii Ōshima. That lighthouse was one of 26 built in Japan to designs by the Scottish engineer Richard Brunton. Still in operation today, it began service in July 1870 as Japan’s first lighthouse built of stone and first to employ a revolving, flashing beacon.

Some of the survivors managed to make their way up the 40-meter cliff to the lighthouse, where they sought help. On learning of the disaster, numerous islanders raced out into the typhoon. They labored through the night, rescuing sailors and officers who were clinging to rocks beneath the lighthouse and recovering bodies from the waves.

Kii Ōshima was home to three villages comprising a total of about 400 households. The residents led a hardscrabble existence, but they shared their limited provisions generously with the Turks. Japanese and German vessels conveyed the survivors to Kobe, and Emperor Meiji and the empress consort dispatched their personal physician and 13 nurses to Kobe to help provide for their care.

The Ertugrul’s survivors left Tokyo for Constantinople aboard the Japanese corvettes Hiei and Kongō in early October 1890. They arrived safely in January 1891, occasioning a public outpouring of gratitude toward Japan. 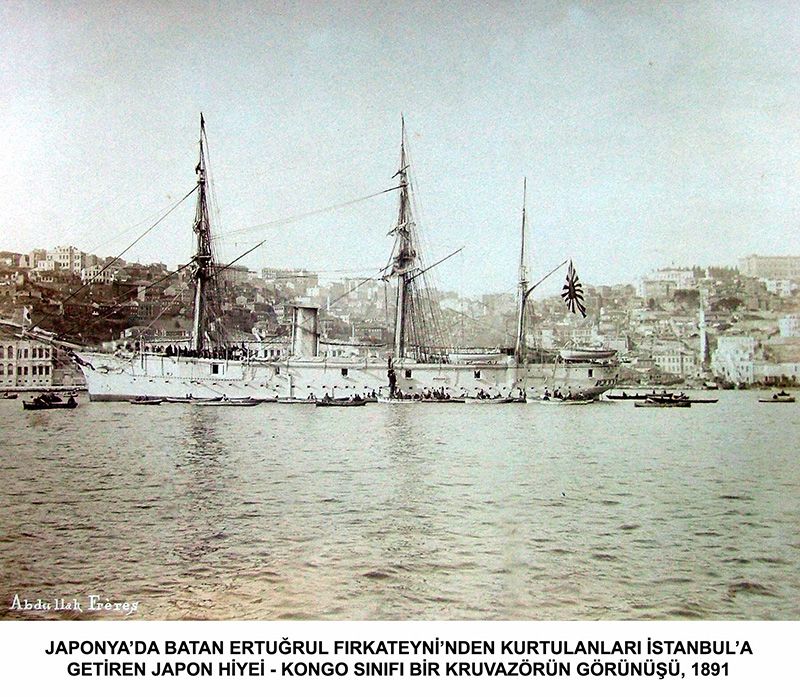 An 1891 photo of the Japanese corvette Kongō anchored in Constantinople. 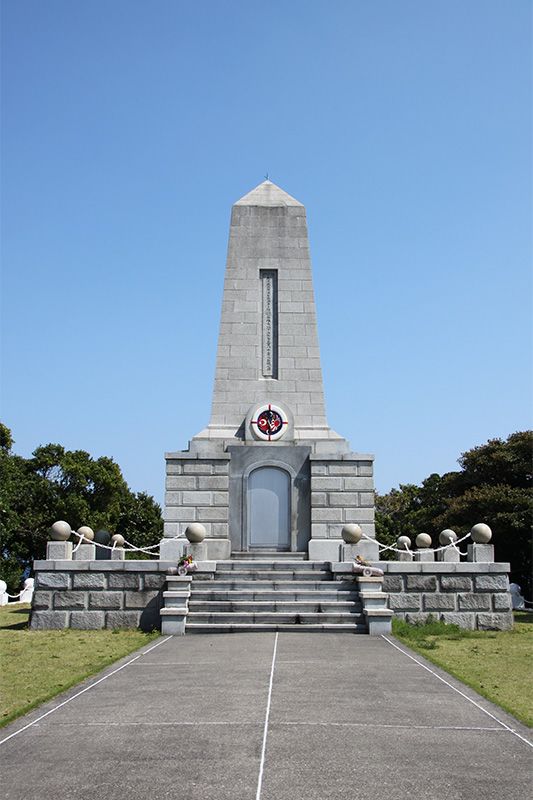 The Ertugrul monument in Wakayama Prefecture.

The recent discovery of a document at a temple on Kii Ōshima has shed new light on the events following the Ertugrul disaster. The document is a copy of a letter from three Japanese physicians who cared for the survivors on the island and was written in response to a request from Turkey to submit a bill for the care that they provided. The physicians decline the request, saying they simply acted out of compassion and never had any intention of charging for their services.

Atop a hill on Kii Ōshima overlooking the site of the disaster stands a monument to the lives lost there. The town of Kushimoto holds a memorial service there every five years in honor of the victims. Some 600 people from Turkey and Japan gathered at the monument for this year’s 125th-anniversary ceremony.

A special memorial service held in June 2008 saw then-President Abudullah Gul travel to the island during an official visit to Japan and lay a wreath at the monument. Gul was the first sitting Turkish president to visit the site.

The site of the wreck has been the scene of excavation work, as well as eulogies. A multinational team of archaeologists and historians began exploring the seabed there in 2007, recovering more than 1,000 items in 2008.

Turkey’s government took the opportunity in 1985 to repay the kindness shown by Japan 95 years earlier. The Iran-Iraq War was escalating, and Iraqi President Saddam Hussein gave 48-hour notice on March 17 that his military would begin targeting even commercial airliners over Iran. That threat effectively stranded thousands of expatriates in the country, including more than 200 Japanese.

Other nations dispatched planes to carry their citizens out of danger. Japan’s government, however, adhered to a legal interpretation, since revised, that precluded dispatching Japanese Air Self-Defense Force transports for that purpose. Its commercial airlines, meanwhile, were reticent to send charter flights on account of the risk.

The Japanese who had converged on Tehran Mehrabad International Airport began to lose hope of being able to leave the nation. But in response to a request from Japan, the Turkish government sent two airliners, ferrying 215 Japanese nationals to safety. It is worth noting that most of Turkey’s more than 500 expatriates in Iran had to exit via overland routes. When Japan expressed appreciation for the rescue of its citizens, Turkey’s officials cited their nation’s debt of gratitude from the Ertugrul incident.

(Originally written in Japanese by Murakami Naohisa of Nippon.com and published on September 16, 2015. The article includes material gleaned from publications issued by the town of Kushimoto. Banner photo: Turkey’s naval chief Bulent Bostanoglu and Kushimoto Mayor Tashima Katsumasa shake hands at a memorial ceremony on June 3, 2015. Behind them is a bronze figure of the Ertugrul, a gift from the Turkish government. © Jiji.)