The popularization of electronic toilets with warm water jets in Japan revolutionized the image of lavatories, once considered unclean and impure. Today Japanese toilets have become a symbol of cleanliness increasingly recognized around the world. Shipments of the Toto Washlet, a megahit product that has become synonymous with high-tech toilets, surpassed 40 million units in July 2015.

High-tech toilets top the list of products that Chinese tourists want to buy in Japan, much to the surprise of the Japanese. The journalist Nakajima Kei has even written a book on the subject, Naze Chugokujin wa Nihon no toire no toriko ni naru no ka?: “Nippon daisuki” no himitsu o toku (Why the Chinese Are Fascinated by Japanese Toilets: Unlocking the Secrets to Their Love Affair with Japan).

Warming Up to High-Tech Toilets

The prototypes of today’s high-tech toilets are the Wash Air Seat, designed in the United States in the 1960s for use in hospitals and care facilities, and similar Swiss products. Initially, Japanese toilet makers Toto (formerly Tōyō Tōki) and Lixil (formerly Ina Seitō) imported these items for sale. Both companies later went on to develop their own products, and Toto introduced its first Washlet in 1980.

The Washlet was not an immediate success, however. A breakthrough came in 1982, when Toto aired a television commercial for the product featuring a popular actress. With the slogan, “The bottom wants to be washed too,” the ad brought the commode to the public’s attention.

When a person seated in a high-tech toilet presses a button, a nozzle extends from under the seat and provides cleansing with a spray of warm water. Users can adjust the position of the nozzle, as well as the pressure and temperature of the water jet. There is also an air-dry function and even a room deodorizer. Moreover, some of the latest models come with the ability to disinfect the bowl and bidet nozzle with electrolyzed water.

The Washlet series has transformed the lavatory into a comfortable private space. It continues to evolve from year to year, seeking not only to improve hygiene but also to add to the user experience, such as with a lid that automatically opens and closes, and enhance environmental performance by cutting down on water use. The US singer Madonna’s amazement at heated toilet seats in Japan during her 2005 visit has become something of a legend.

In July 2012 the Japan Society of Mechanical Engineers designated the very first Washlet, the Washlet G, as part of Japan’s Mechanical Engineering Heritage. The Washlet was thus recognized as a historically significant mechanical technology that “changed society.” Among the other items included in the list are the Seikan ferry that once carried trains between the islands of Honshū and Hokkaidō, the original 0 Series Shinkansen train, and the automated ticket gate developed by Omron.

According to a March 2015 survey by the Cabinet Office on the prevalence of principal consumer durables, commodes with warm water jets are now used in 77.5% of Japanese homes. Electronic seats have become standard not only in homes but also in commercial establishments and public facilities, including airports and concert halls. In terms of the Toto Washlet, it took until 1998, or 18 years, to sell 10 million units. But its popularity spread much more quickly after that, achieving the 40-million mark on its thirty-fifth anniversary.

The price for a Washlet, some models of which can be installed on traditional toilet bowls, starts at around ¥70,000. Integrated units can cost more than ¥300,000. Toto’s challenge going forward is expanding international sales of its signature high-tech toilets. Overseas sales are currently estimated to be about a tenth of sales in Japan.

The spring of 2015 saw the opening of Gallery Toto at Narita International Airport, in the corridor connecting the main building of Terminal 2 with the terminal annex. It is an experiential showroom targeting visitors from overseas. Designed by Klein Dytham architecture, a Japan-based practice led by Italian Astrid Klein and British Mark Dytham, the restroom has a futuristic ambience unlike any other. 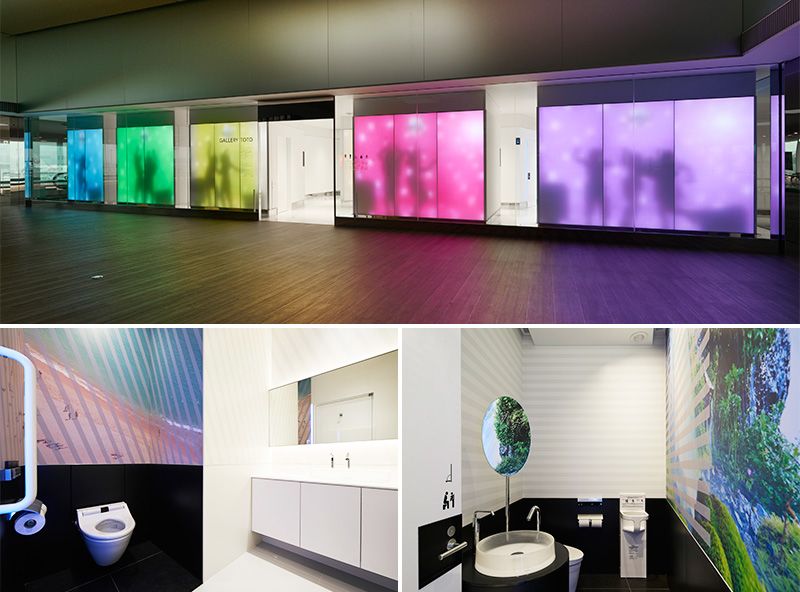 Gallery Toto has 10 rooms in all: 4 stalls each for men and women, plus a nursing room and a multipurpose toilet. The rooms are equipped with the latest in Toto’s toilet innovations, such as a new deodorizing feature. The space is imbued with a spirit of hospitality that welcomes visitors from the moment they step inside. Much more than just a place to answer the call of nature, it provides a haven to enjoy a moment of pause and relaxation.

Narita Airport is not the only location pursuing toilet excellence. Shibuya Hikarie, a high-rise complex in Tokyo’s Shibuya district, also features stylish restrooms; the women’s restrooms in the shopping areas are designed with concepts that vary from floor to floor. The pursuit of aesthetics in restroom design may be thanks in part to the toilet revolution brought about by the Washlet.