Demographic aging and other social transformation under way in Japan are occasioning changes in funeral practices. People are increasingly opting for smaller funerals and for greater personalization of services. Also on the increase is the number of uncared-for graves.

Responses to Japan’s funerary issues include new options such as space burial, where for a fee a portion of a loved one’s ashes can be launched into the cosmos. Meanwhile, Japanese are beginning to push back against the funeral industry’s chronic lack of transparency in regard to pricing, prompting funeral providers to respond with standardized fees for such services as the traditional officiation by Buddhist priests.

Two hundred twenty companies from Japan’s funeral industry took part in a trade show in December 2015 at the Tokyo Big Sight exhibition complex. Capturing the most attention at the show were space funerals. The services on offer included encapsulating the deceased’s ashes and launching the capsules into space—a celestial version of scattering ashes at sea.

Space interment has been available in the United States since 1997. Among the luminaries served have been the television screenwriter and producer Gene Roddenberry, the creator of the Star Trek series; the astronaut Gordon Cooper; and, the first lunar interment, the astronomer Eugene Shoemaker. 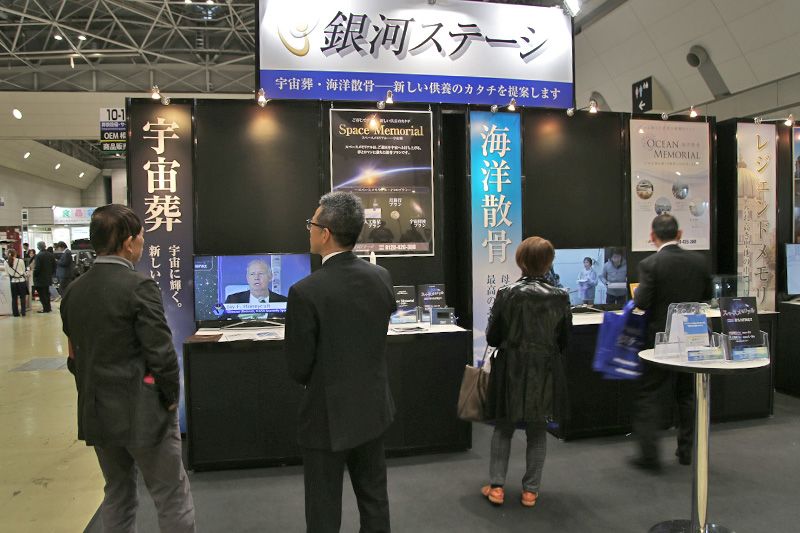 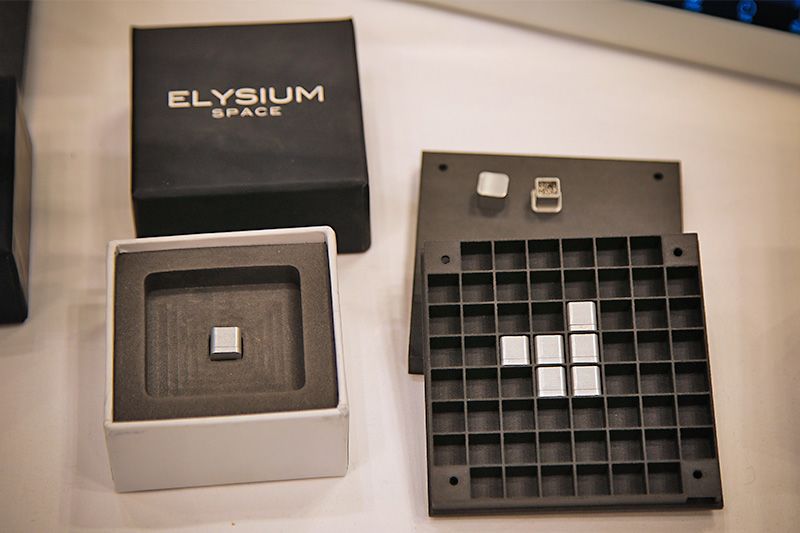 A focal point at the December trade show was the space-interment exhibit by Osaka-based Ginga Stage. (Ginga means “galaxy” in Japanese.) The company is the Japanese sales agency for the US celestial funeral operator Celestis. Its service offerings include launching remains atop a rocket and releasing them in space for ¥450,000, placing remains in earth orbit aboard a satellite for ¥950,000, and placing remains on the moon for ¥2,500,000. Portions of the ashes of three Japanese were part of the space-release payload on Celestis’s fourteenth launch on November 6, 2015. 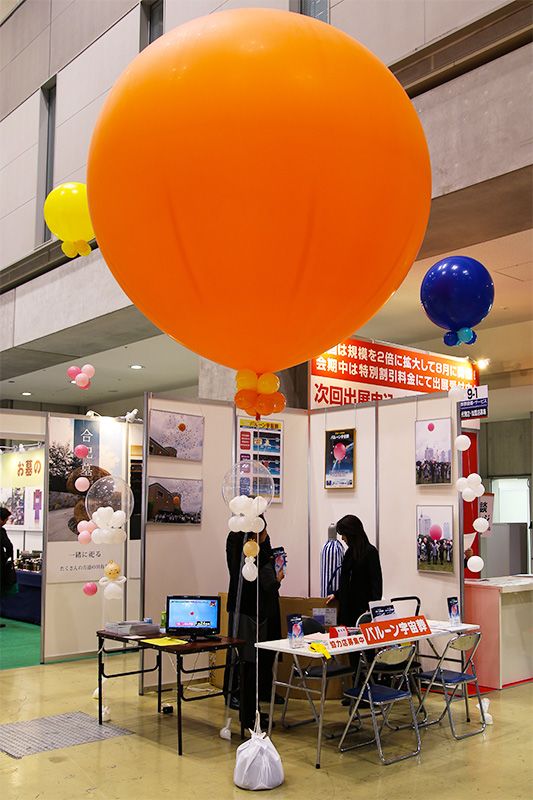 Another US celestial funeral operator, Elysium Space, has been marketing its services in Japan since October 2013. These include launching remains and releasing them in space, whereupon they circle the Earth before plummeting through the atmosphere like a shooting star. The firm charges ¥300,000 for its Shooting Star Memorial service.

Utsunomiya-based Balloon Kobo lets families have the ashes of their loved ones scattered over the area of their choice. It places the ashes of the deceased inside a large balloon of natural rubber, fills the balloon with helium, and sets it aloft over the chosen terrain. The balloon climbs to an altitude of 30–35 kilometers, where in the lower pressure of the stratosphere it swells to three or four times its original diameter and pops, scattering the ashes earthward. Balloon Kobo charges ¥260,000 for a balloon funeral.

Japanese funeral practices started changing noticeably around 1990 as homeowners began to abandon the practice of holding funerals in their homes. Today, nearly all funerals take place at mortuaries. Attendance of services, meanwhile, has shrunk. Kotani Midori, a researcher at Dai-ichi Life Research Institute, attributes the development partly to demographics.

Citing statistics, Kotani explains that when an elderly parent passes, children in their late 50s tend to hold the largest, most ceremonious funerals. Amid the graying of Japanese society, however, a growing number of parents are living until their children have reached retirement age. The older survivors are less inclined than their younger predecessors to hold large-scale services.

In additions, small families are dropping the traditional practice of holding a visitation wake and then a funeral ceremony the next day, opting instead to wrap things up in a one-day package. In Japan’s large cities, up to 30% of families choose to do away with funeral ceremonies altogether and simply hold a cremation and interment.

Kotani cites a 2010 survey as evidence of the change in Japanese funeral practices. The survey respondents indicated their preferred format for their eventual funeral. “Just family and close friends” was the most popular choice, at 33%. “Just immediate family, no distant relatives” was the second most popular, at 30%. “No funeral” was the choice of 7% of the respondents.

Gravesites are another issue in Japan. As the population migrated to urban centers, people have become less likely to live near the graves of their parents and ancestors. A November 2013 survey by Kumamoto revealed that about 40% of the graves in the prefecture were completely uncared for—in the city of Hitoyoshi the percentage was an astounding 80%. In many cases lineages have died out or families have long since left the prefecture, leaving no descendants to care for the graves. Left to the elements, some of the gravestones have toppled, and many have been discarded illegally.

A trend in Japanese cemeteries over the past 20 years is the practice of interring unrelated individuals in common graves. This is partly a reflection of the growing involvement of nursing homes in owning and managing gravesites. Companies and school alumni associations are also increasingly active in owning and managing gravesites, showing how vertical, family ties are giving way to horizontal, social and professional affiliations in the realm of long-term care for bodily remains. 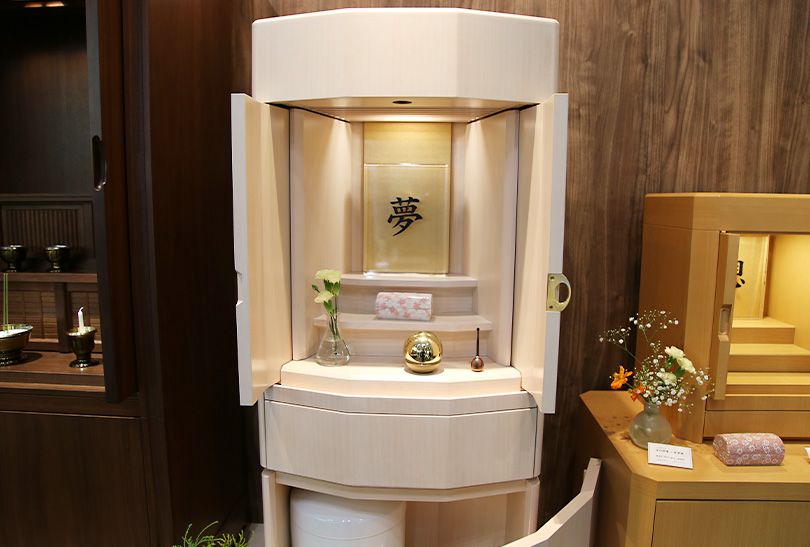 Change is under way, too, in people’s interaction with Buddhist priests at funerals. Japanese families traditionally call on priests to officiate at funerals. If they have an established relationship with a temple, they turn to the temple priest. Otherwise, they secure an introduction to a priest through the funeral parlor or other channels.

Japanese continue to attach great value to the practice of having a priest chant scriptures at a funeral to guide the spirit of the deceased to deliverance in the afterlife. People are beginning to recoil, however, at the lack of transparency in priests’ fees. Mainstream Buddhist figures are among those pressing for reform. One of them is Hayashi Kazuma, a Tokyo Buddhist priest of the Tendai sect.

Hayashi launched a company in 2004 to serve families that lack temple affiliations by dispatching priests for officiating at funerals in the Tokyo area. What triggered Hayashi’s entrepreneurial initiative was a friend’s complaint about receiving a ¥5 million funerary bill from a temple. The friend just managed to scrape together ¥3 million to offer the priest from the temple. But the priest rejected the offering as wholly insufficient and left the wake in a huff. And according to Hayashi’s friend he subsequently refused to arrange for interring the deceased’s remains. 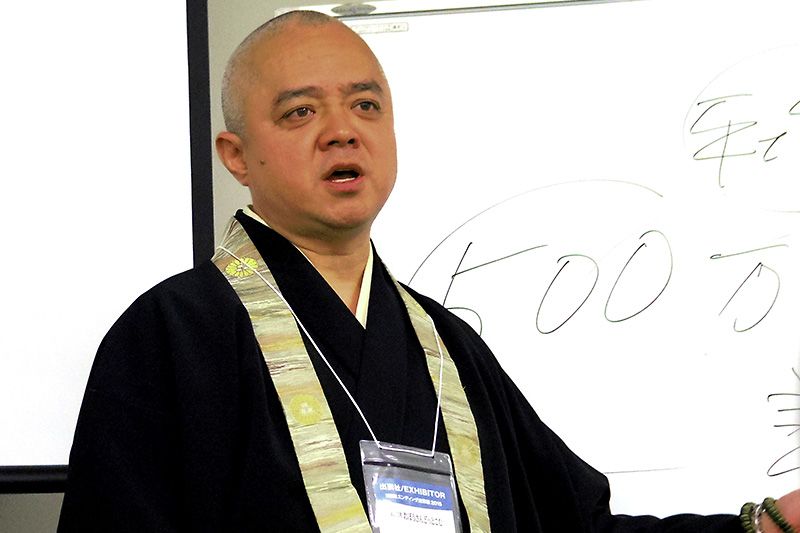 The Tendai Buddhist priest Hayashi Kazuma speaks at a seminar held in conjunction with a funerary trade show.

Hayashi’s company website provides members, who pay a one-time fee of ¥10,000 to join, a clear and easy-to-understand price list for funerary services. The total price for a no-frills, two-day package of officiating at the wake and funeral ceremony is ¥90,000, considerably less than the average price for comparable services in Tokyo. Hayashi’s customers are happy about the transparent and affordable pricing, but his counterparts in the Buddhist establishment are less enthusiastic with the Japan Buddhist Federation even calling on him to desist from publishing his price list on the web.

“I hear of people who’ve needed to pay ¥1 million to engage a priest for a ceremony,” remarks Hayashi. “That sort of behavior will be the end of Buddhism in Japan. Buddhism is about serving people, not temples.” (Originally written in Japanese by Nagasawa Takaaki of Nippon.com and published on January 21, 2016. Banner photo: A cutout of a prominent flower arranger is displayed along with funeral goods created under his artistic supervision. Photos and video by Ōtani Kiyohide.)