Tea parties arranged at embassies in Tokyo by a nonprofit organization are proving to be very popular, blending well with the present government’s policy of promoting soft cultural exchange. The gatherings serve as an important means of introducing the cultures of the host countries and deepening friendship.

“Join Us for Tea at the Embassy”

The embassy tea parties are being organized by the International Artists Center, which was established in 1960 as a platform for propagating cultural exchange through collaboration with diplomatic missions in Japan. Its work over the years has encompassed initiatives for sharing cultural insights through food, traditional crafts, and festivals, as well as dance, drama, and art.

The IAC launched the new initiative in 2015 under the catchphrase “Join us for tea at the embassy.” Working through representatives of the diplomatic corps among its members, it recruits legations to participate in holding open-house parties. The gatherings enable guests to view presentations about the history, culture, arts, fashion, and lifestyles of the host nation while enjoying tea and snacks.

So far four Tokyo legations—those of Azerbaijan, Botswana, Serbia, and Tanzania—have hosted “Join us for tea at the embassy” events with the IAC, and the center is scheduled to hold a fifth party at the Malagasy embassy in March. The gatherings are intimate and informal, and the number of applications from prospective guests invariably exceeds the seating capacity, usually about 30 persons.

Participants in the inaugural tea party at the Tanzanian embassy tasted coffee, tea, and spices from the host nation and viewed colorful kanga garments and other accouterments of life there. “Immediately on stepping into the embassy, we encountered vivid tingatinga paintings and energetic Makonde carvings,” recalls a guest, “and we were greeted by female diplomats attired in beautiful ethnic garb. We heard from the ambassador about Tanzania’s natural treasures, its history, its rich culture, and its people’s manners. As Japanese, we felt a special affinity for Tanzanians when we learned about their tradition of using honorifics when addressing older people.”

“This event is certain to deepen understanding of Tanzania and heighten our profile in Japan,” declared Tanzanian Ambassador Batilda Salha Burian in her greeting. “Let us continue working to further strengthen the ties of friendship between our nations.” The ambassador also called for stepped-up investment in her nation by Japanese companies and drew attention to the tourist appeal of Tanzania’s Serengeti National Park, Selous Game Reserve, Mount Kilimanjaro, and Lake Victoria. 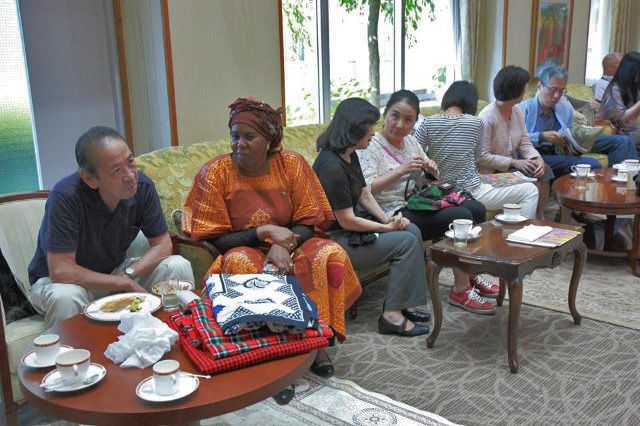 The ambassador (second from left) mingles with guests at the Tanzanian embassy.

“I discovered that I had a one-sided view of Africa,” confesses an individual who attended parties at the two African embassies. “Botswana was one of the poorest nations on earth when it gained independence, but then the discovery of diamond deposits secured funding for national development programs, and Botswana has become an African success story. We learned that education and medical care are free for all. That’s fantastic!” 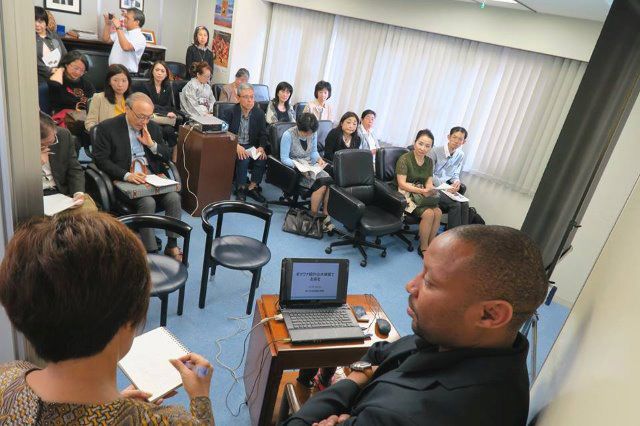 The embassy tea parties are opportunities for familiarizing guests with the host nations, as in this presentation at the Botswanan embassy.

Guests at the Serbian embassy’s tea party encountered an impressive tale of bilateral rapport. They heard of how countless Serbs had sent messages of sympathy and encouragement in the wake of the Great East Japan Earthquake of 2011 and how Serbia made a financial contribution to the relief effort that was large relative to its gross domestic product. They also heard how Japanese had reciprocated the kindness with generous relief assistance after Serbia suffered massive flooding in 2014. 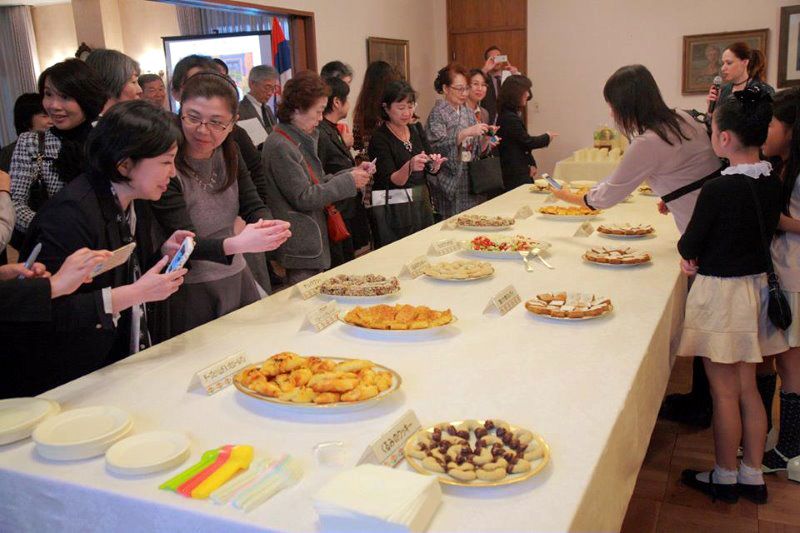 Cookies baked by staff members at the Serbian embassy delight the guests at a tea party held there.

Azerbaijani Ambassador Gursel Ismayilzada related his nation’s democratic emergence to the guests at his embassy’s tea party. “Several Islamic nations gained independence with the 1991 collapse of the Soviet Union,” he explained in fluent Japanese, “but [Azerbaijan] was the first democracy among those nations. And it was the first to grant female suffrage.” The ambassador added that Azerbaijan has just one-fourth the landmass of Japan but is blessed with abundant natural resources. He also emphasized that his nation abides by the separation of church and state and that Muslims, Christians, and Jews coexist peacefully there. 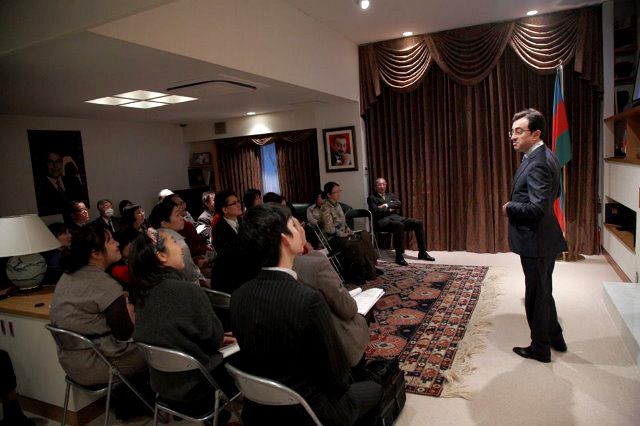 The Azerbaijani ambassador gives a talk to tea party guests at his embassy.

Women in the Vanguard

“Most people never get the chance to set foot inside an embassy,” notes IAC Secretary-General Kanaya Terumi, “so the participants are grateful for the opportunity provided by the friendly presentations and informal cultural exchange. Female diplomats take the lead in organizing the events at each embassy, and numerous Japanese women who are interested in international exchange lend support. Men outnumber women in the diplomatic corps, but female diplomats are more proactive in tackling cultural exchange. Once the ambassador has OK’d the undertaking, it is the women who jump in and get things done.”

Among the largely female Japanese participants are such specialists as nutritionists, cooks, and tea instructors. Also on hand for each tea party are volunteer interpreters.

Reciprocity a Key to Sustainability in Cultural Exchange

“The diplomats enjoy the tea parties as much as the Japanese guests do,” enthuses Kanaya. “And that’s important, because sustainability in cultural exchange depends on mutual commitment. So we will emphasize the principle of reciprocity in pressing ahead with this program.”

Kanaya reports that the IAC is in talks with several embassies about future tea parties. A total of 153 nations maintain embassies in Japan, so there remains immense potential for advancing cultural exchange and international understanding through the “Join us for tea at the embassy” initiative.

(Originally written in Japanese by Harada Kazuyoshi of Nippon.com and published on February 8, 2016. Banner photo: Examples of traditional ethnic garb provide a window on Azerbaijani culture at the nation’s embassy in Tokyo. Photography by Fujikura Akiharu, Japan Professional Photographers Society.)