Tokyo 2020 to Use Recycled Gold in Medals

On November 9, the organizing committee announced that medals for the 2020 Tokyo Olympic and Paralympic Games will be made using gold, silver, and other metals recovered from old mobile phones, smartphones, and computers. In addition to communicating the image of an environment-friendly Olympics and Paralympics, it is hoped recycled medals will generate greater public interest in the role of recycling in society.

The Push for “Urban Mine” Medals

The campaign to use recycled medals began in June 2015, when three cities—Hachinohe in Aomori Prefecture, Ōdate in Akita Prefecture, and Ichinoseki in Iwate Prefecture—submitted to the Tokyo Organizing Committee of the Olympic and Paralympic Games a proposal to use gold, silver, and bronze recovered from small end-of-life household appliances to make medals. In July 2016 the Eco Materials Forum, an association based in Tsukuba, Ibaraki Prefecture, that studies environmentally conscious materials, produced a prototype gold medal sourced only from recycled gold that meets Olympic medal specifications. At the same time, it launched an online petition calling on the organizing committee to adopt the idea.

Old electronics lying around unused in homes and offices have been dubbed “urban mines” due to their potential as sources of large amounts of rare and precious metals if recycled. On October 21 the city of Ōbu in Aichi Prefecture, together with its Shigakkan University and major electronics recycler Renet Japan Inc., launched the Committee for Cooperation on Urban Mine Medals. At the press conference held to announce the launch, four Rio Olympic medalists in women’s wrestling, including Yoshida Saori, rooted for the cause. 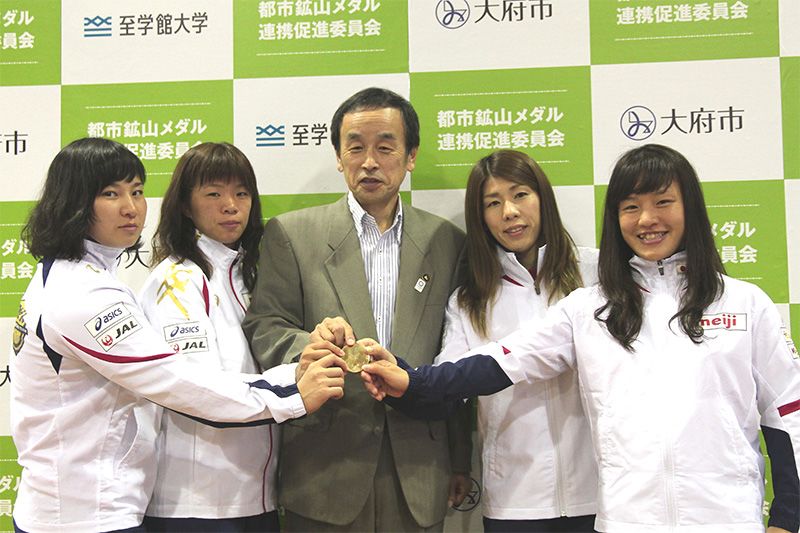 Okamura Hideto, mayor of Ōbu city, with four Rio Olympic medalists in women's wrestling at the press conference calling for the use of recycled medals at the 2020 Tokyo games. (Photo courtesy of Committee for Cooperation on Urban Mine Medals)

College students were also involved in the drive. Environment Rodorigues, a student-run environmental nonprofit group at Waseda University, collected signatures as well as used products at events across Tokyo and on campus. Campaigners’ efforts were rewarded with last week’s decision by the organizing committee to adopt recycled medals.

The Act on Promotion of Recycling of Small Waste Electrical and Electronic Equipment, enacted in 2013, put in place a system for collecting and recycling end-of-life products such as mobile phones, computers, digital cameras, and game consoles. According to statistics by the Ministry of the Environment and the Ministry of Economy, Trade, and Industry, each year 650,000 tons’ worth of small appliances reach the end of their life cycles in Japan. If all of these appliances were collected and recycled, 280,000 tons of metal could be reused, for a total value of ¥84.4 billion. 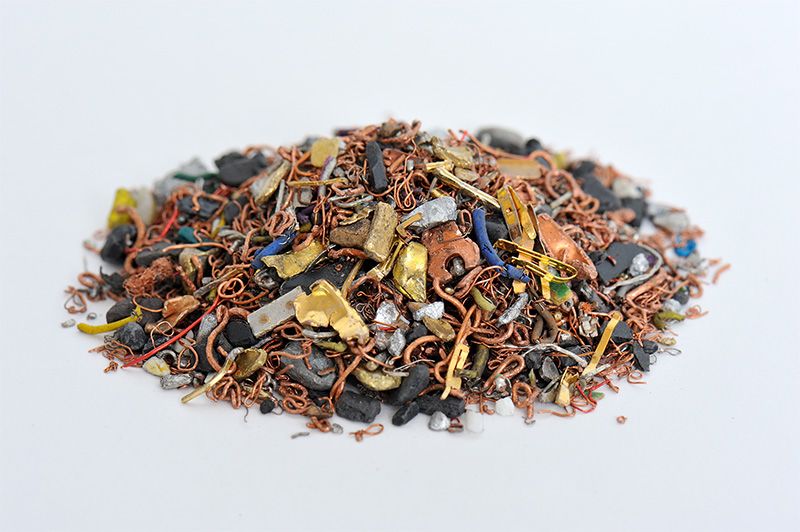 But the current recovery rate is a dismal 7.7%. Over 200 million mobile phones and over 30 million personal computers are thought to be gathering dust in homes and offices.

Some of these old appliances fall in the hands of unauthorized waste collectors. Materials recovered by these operators often undergo insufficient recycling processes at inferior facilities, giving rise to concerns of environmental damage, particularly overseas. 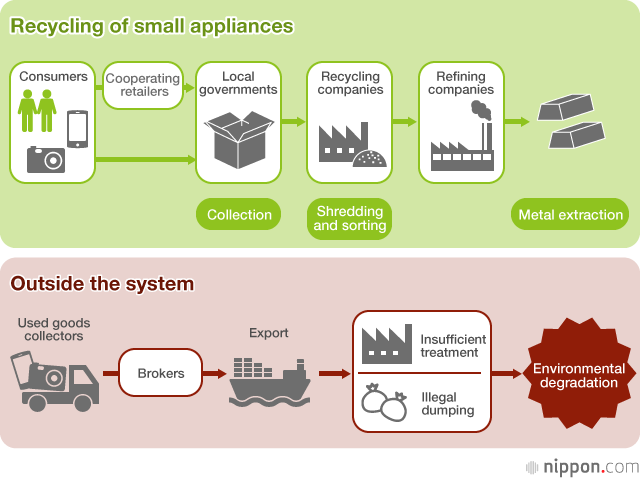 Sparking Change in Attitudes toward Recycling

“If devices that people put out to recycle are actually reused as material for gold medals, they will be happy to have done it,” says Chairman Harada Kōmei of the Ecomaterials Forum. “Seeing the visible results of one’s actions will dramatically change people’s attitudes toward recycling.” Therein, he stresses, lies the project’s significance.

To prevent theft, small electrical and electronic goods recovered under the recycling promotion act are made fully traceable. Since recyclers provide updated information on the status of the goods, “You would be able to track down which factory recycled your mobile phone or computer into metal and which medal in what Olympic event it was used for.” This would be a great way of demonstrating Japan’s technology to the world, Harada asserts. 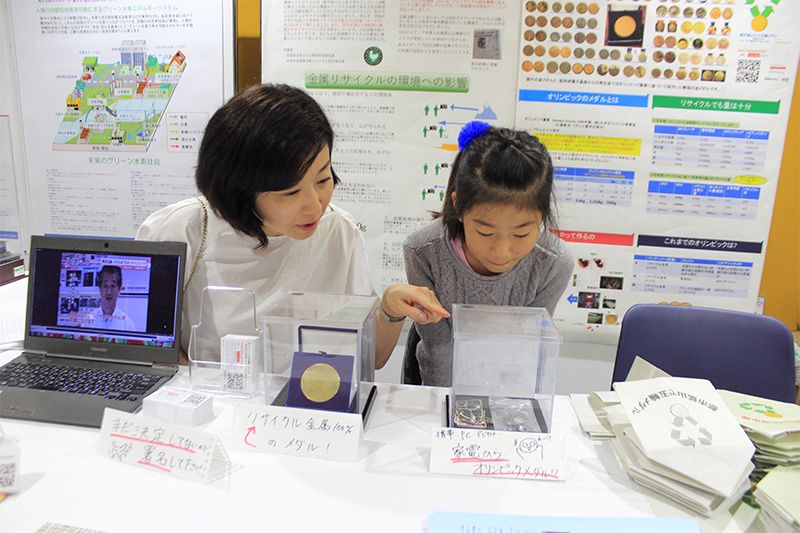 A mother and daughter look at how a medal is made from recycled material at the booth of Environment Rodorigues during an environmental event on October 8, 2016, in Minato, Tokyo.

The silver and bronze medals at the 2016 Summer Olympics in Rio de Janeiro were claimed to contain 30% recycled material, but there was no mention of recycled gold in the gold medals. The Ecomaterials Forum estimates that 9.6 kilograms of gold, 1.2 tons of silver, and 700 kg of bronze will be needed to manufacture the medals for the Tokyo Olympic and Paralympic Games. Sourcing all 9.6 kg of this gold from recycled materials would require roughly 320,000 mobile phones or 50,000 computers.

(Originally written in Japanese by Ishii Masato of Nippon.com and published on November 8, 2016. Banner photo: A member of Environment Rodorigues, Waseda University, holds up a prototype gold medal made from recycled materials next to a poster of Olympic medals through the years.)