Pioneered the use of statistics and quantitative analysis in his investigation of voter behavior and public opinion trends and his consideration of postwar Japan’s political structure. His 1983 bestseller Nihon no seiji (Japanese Politics) discussed the importance of opposing concepts such as tatemae (public opinions) and hon’ne (true beliefs) in forming the nation’s political attitudes and culture. He was a professor of law at both the University of Tokyo and Chiba University and the president of Tokyo Woman's Christian University from 1988 to 1992.

Writer of many novels on such primal themes as family and death, including Hi no yama: Yamazaruki (Mountain of Fire: Account of a Wild Monkey), Warai ōkami (trans. Laughing Wolf), and Hikari no ryōbun (Territory of Light). Her works have been translated into English and other languages, and she has received much international acclaim. Born Tsushima Satoko, the daughter of literary great Dazai Osamu (real name Tsushima Shūji). She began publishing fiction while still attending Shirayuri Women's University in Tokyo. In 1978, she established herself as a writer when her account of an imaginary pregnancy Chōji (trans. Child of Fortune) received the Women’s Prize for Fiction.

Studied ancient Japanese history with an emphasis on Japan’s relations with Korea and China as part of East Asia. He was particularly noted for research of legends and the political system based on imperial rule. He is also known for popularizing the term toraijin (people who came across) for those who settled in ancient Japan from the Korean peninsula in preference to the earlier kikajin (people who assimilated). He was a professor emeritus at Kyoto University.

One of Japan’s first female writers of detective fiction, known for such masterpieces as Jōhatsu (Disappearance) and W no higeki (trans. Murder at Mt. Fuji). In 1989, her novel Dai san no onna (trans. The Third Lady) received France’s Prix du Roman d'Aventures. She was born in Tokyo in 1938. Her first novel, written while she was a student at Keiō University was a finalist for the Edogawa Ranpō Prize, but her career did not really get going until 1970. Her 1973 novel Disappearance won the Mystery Writers of Japan Award. In 2007, she became the first female winner of the Japanese Mystery Literature Award.

Was the first person to import the US-developed Moog synthesizer to Japan in 1971. He subsequently became the first Japanese artist to be nominated for a Grammy for his 1974 album Snowflakes are Dancing, which he performed and recorded entirely by himself. The work was nominated for a total of four Grammy awards. His synthesizer arrangements of famous classical pieces including Pictures at an Exhibition, The Firebird, and The Planets became worldwide hits. He was born in Tokyo in 1932 and began composition while studying at Keiō University. In the 1960s, he created the music for Tezuka Osamu TV anime series Janguru taitei (Kimba the White Lion) and Ribon no kishi (Princess Knight). In 2012, he won new headlines for Īhatōvu kōkyōkyoku (Ihatov Symphony), his collaboration with synthesizer singing application Hatsune Miku, which was based on the imaginary land of Ihatov created by writer Miyazawa Kenji. 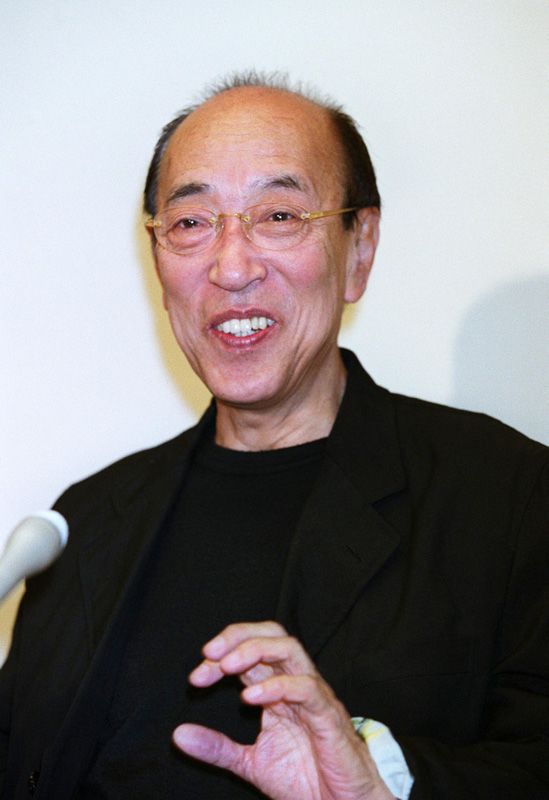 One of Japan’s leading contemporary theater directors. Won high acclaim, particularly for his direction of Shakespeare plays, and directed many overseas productions. Born in Kawaguchi, Saitama Prefecture in 1935. After graduating from high school he failed the entrance examinations for Tokyo University of the Arts and started out as an actor. He switched to become a director, winning initial popularity among young audiences at small and underground venues. From his 1974 production of Romeo and Juliet at Nissay Theater in Tokyo, he began directing at large venues. In 1983, he directed the Greek tragedy Medea in Athens. In collaboration with the Royal Shakespeare Company, he helmed a well-received version of King Lear in 1999. He is also known for memorable interpretations of Macbeth and The Tempest, and his direction of Chikamatsu shinjū monogatari (Chikamatsu’s Love Suicides) based on the works of the playwright Chikamatsu Monzaemon.

Invented the globally popular game of Othello. As head of the World Othello Federation, he helped host the annual Othello world championship in his hometown of Mito, Ibaraki Prefecture, in 2006 and 2016. Born in 1932. While still at school he started devising a game with stones used in go. He gradually refined the rules and introduced the game to clients while working as a salesman for a pharmaceutical company. Their praise encouraged him to submit the game to a toy manufacturer. It went on sale in 1973 under the name Othello,and became a huge hit. 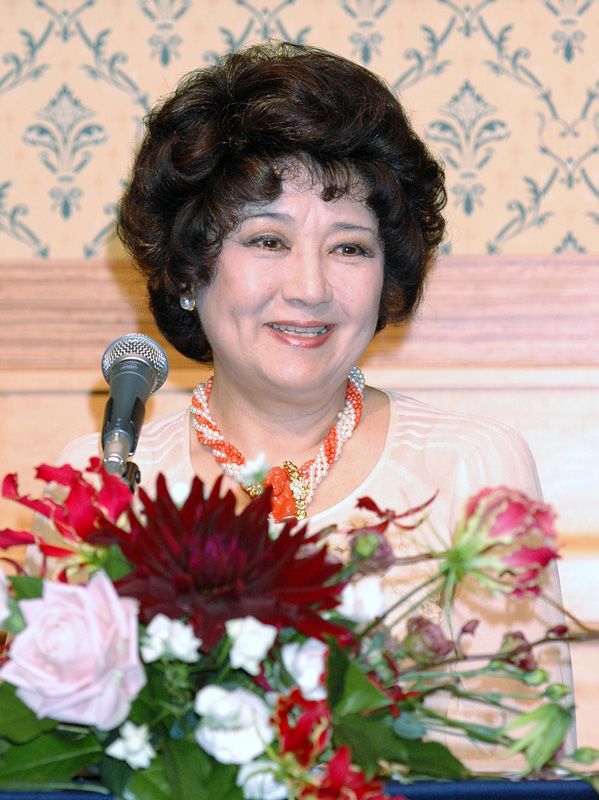 Nakamura Hiroko at a press conference in Tokyo in 2009, fifty years after she made her professional debut. (© Jiji)

A former yokozuna, he won 31 sumō tournaments during his illustrious career. He was small, but regularly defeated larger wrestlers, earning himself the nickname “the wolf.” Received the People's Honor Award in 1989. Born in Hokkaidō in 1955. After being scouted by the Kokonoe stablemaster Chiyonoyama, he made his sumō debut in 1970. In 1981, he won both his first basho tournament, earning promotion to the top yokozuna rank. He remained a yokozuna until his retirement in 1991, achieving 1,045 victories over his career. After retirement he became head of the Kokonoe stable.

Leader of a prominent LDP faction on the moderate wing of the party. Part of the powerful YKK group within the party in the 1990s together with Koizumi Jun’ichirō, later prime minister, and Yamasaki Taku, later LDP vice-president. Born in 1939. His father was a bureaucrat in the former Home Ministry. After working as a diplomat, Katō was elected to the House of Representatives from Yamagata Prefecture in 1972. He served as deputy chief cabinet secretary in the cabinet of Ōhira Masayoshi and chief cabinet secretary in the cabinet of Miyazawa Kiichi. In 1995, he was appointed as LDP secretary-general. In 1998, he became head of the historic Kōchikai faction. After the failure of his attempted rebellion in 2000 against the premiership of Mori Yoshirō, in which he called for a vote of no confidence, the Kōchikai faction split and he lost effective power.

Became the first woman to climb Mount Everest in 1975. In 1992, she also became the first woman to successfully climb all of the Seven Summits—the highest mountains on each of the seven continents. As well as popularizing mountaineering through writing, she earned a master’s degree from Kyūshū University for her study of the problem of trash on Mount Everest. She also worked to protect mountain environments. Born in Fukushima Prefecture in 1939. She joined a mountaineering club after graduating from university and established her own club in 1969. Her Everest ascent drew wide attention in Japan as a great achievement by a mother with a three-year-old daughter. 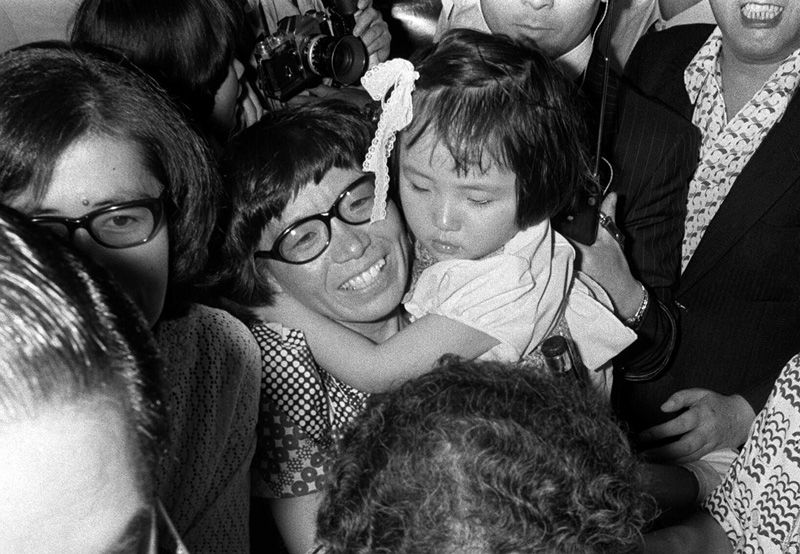 Tabei Junko (center) reunites with her daughter at Haneda Airport on June 20, 1975, after returning to Japan, following her successful ascent of Mount Everest. (© Jiji)

The younger brother of Emperor Shōwa and the uncle of Emperor Akihito. He was also known as a researcher of ancient Oriental History and was a lecturer at Tokyo Woman’s Christian University. Born on December 2, 1915, as the fourth son of Emperor Taishō. He was given the title of Prince Mikasa in 1935, allowing him to begin his own house. During World War II, he was a staff officer at the China Expeditionary Army Headquarters and Imperial General Headquarters. As a historian, he opposed postwar moves to revive the observation of Kigensetsu (Empire Day), which had been abolished during the Allied Occupation. The later discovery of documents he wrote in 1944 critical of the Imperial Army caused much media interest. He had five children with his wife Princess Yuriko, but outlived three of them.