As assistant coach of the men’s national soccer team he helped Japan to a best-eight finish at the 1964 Tokyo Olympics and the bronze medal at 1968 Summer Games in Mexico City. Was head coach of the national team from 1970 to 1971. Served as president of the Japan Football Association from 1998 to 2002. He was influential in establishing the J. League and securing cohosting rights for Japan with South Korea for the 2002 FIFA World Cup.

Prolific novelist belonging to the so-called third generation of postwar writers. After graduating from the University of Tokyo he joined the staff of the literary magazine Shinshichō in 1950. He was married to fellow novelist Sono Ayako. His was a professor at Nihon University and headed Japan Writer’s Association. He also served as director-general of the Cultural Affairs Agency in 1985–86. In 1999 the Japanese government honored him for his outstanding cultural achievements.

Already an award-winning mangaka in Japan, he began gaining attention in France and other countries in the 1990s for such works as Aruku hito (trans. The Walking Man) and Haruka na machi e (trans. A Distant Neighborhood). In 2011, the French government made him a Knight of the Order of Arts and Letters. 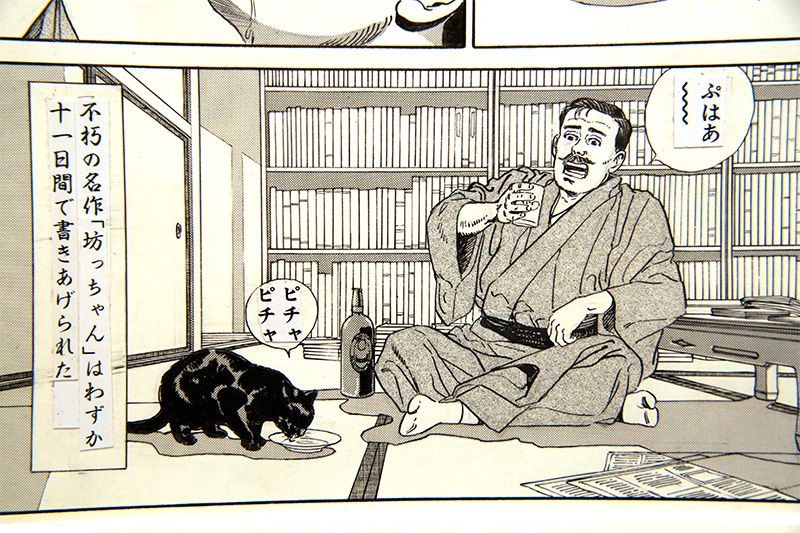 A scene from a draft of Taniguchi Jirō’s early hit Botchan no jidai (trans. The Times of Botchan). (Photo by Nagasaka Yoshiki. © Papier 2017.)

An influential film director known for his distinct visual style. He debuted at Japanese studio Nikkatsu in 1956, where he made a long list of gangster films like Tokyo nagaremono (Tokyo Drifter), but became embroiled in a decade-long dispute with the company after making Koroshi no Rakuin (Branded to Kill). He returned to filmmaking in 1977 with Hishū Monogatari (A Tale of Sorrow and Sadness), and his work Zigeunerweisen gained broad attention when it won honorable mention at the 1981 Berlin International Film Festival. 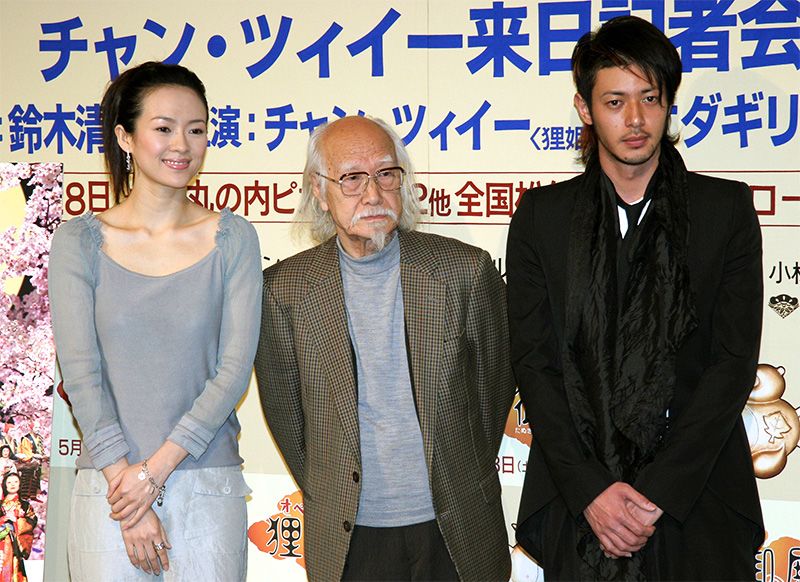 Suzuki Seijun (center) is joined by cast members of his film Operetta tanuki goten (Princess Raccoon) at a press conference in Tokyo in 2005. (© Jiji)

A Japanese engineer, he founded Roland in 1972. The firm revolutionized electronic music starting in the 1980s with its lineup of synthesizers and drum machines including the groundbreaking TR-808 and Jupiter-8. In 2013, Kakehashi shared a Technical Grammy Award for his work in developing the MIDI (Musical Instrument Digital Interface) standard for connecting instruments by different makers. 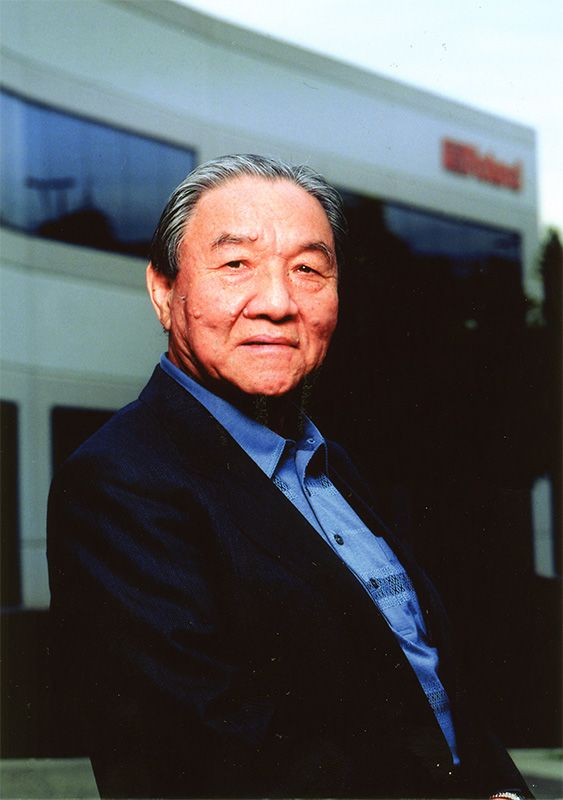 As a noted Japanese writer of verse and literary critic, he helped make poetry a part of everyday life. His gained broad attention with his debut Kiroku to genzai (Memory and Present) and went on to publish numerous other collections of poetry. He also wrote the long-running newspaper column Oriori no uta (Poems for All Seasons) and collaborated widely with literary figures in Japan and overseas on anthologies and other poetry projects.

Born in Kumejima, he was a student when mobilized to fight in the Battle of Okinawa. During his two terms as Okinawa governor from 1990 to 1998 he fought to reduce the burden posed by US military bases concentrated in the prefecture. Following the 1995 rape of a local schoolgirl by US servicemen, which sparked protests by residents, he created a political stir by refusing to sign documents necessary to renew land leases for bases.

A popular newscaster, she made her television debut as a university student in 2003, reporting the weather before going on to headline news shows and other programs. She married kabuki actor Ichikawa Ebizō IX in 2010 and gave birth to the couple’s two children, a son and daughter. In 2016 she announced she had breast cancer and drew broad public attention with her blog detailing her life while receiving treatment for the disease. The BBC named her in its 100 Women of 2016.

An expert on longevity and chairman emeritus of St. Luke’s International University, he continued to practice medicine even after turning 100 years old. His essay collection Ikikata jōzu (Living Well) became a national bestseller, and his advice on leading a long, happy life was frequently featured in the media. He started working at St. Luke’s in 1941 and later took the post of president. He was an early advocate of patient-centered care and preventive measures for lifestyle diseases like high blood pressure. 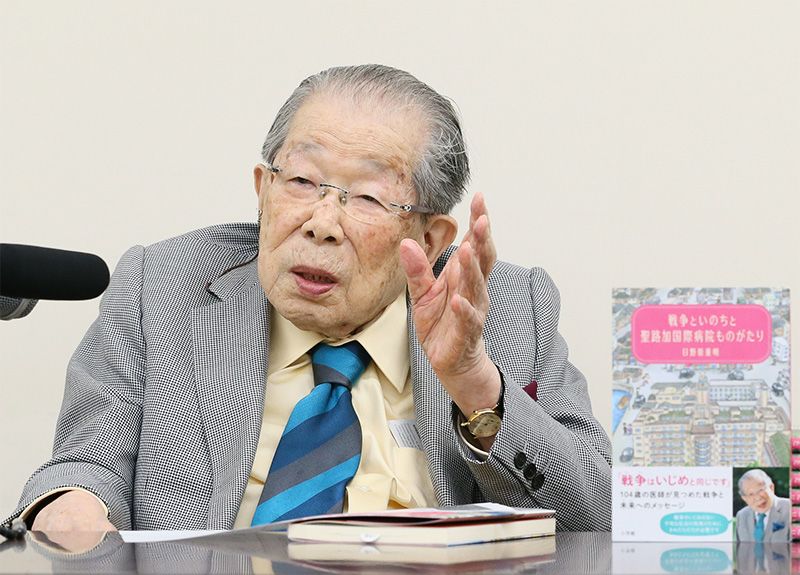 Hinohara Shigeaki at a press conference in Tokyo in 2015 for the release of one of his many books. (© Jiji)

After leaving he Liberal Democratic Party in a call for political reform, in 1994 he succeeded Hosokawa Morihiro as prime minister as head of a multiparty coalition opposed to the LDP. However, several member parties left the coalition, robbing it of its Diet majority, and Hata resigned just 64 days into his term, making it the second-shortest tenure for a prime minister in the postwar period.

A prominent campaigner against nuclear weapons, he was 16 years old when the atomic bomb exploded over Nagasaki, severely burning his back and left arm. He had to lie face down for nearly two years of the almost four years he spent in the hospital. He became an icon of the horrors of nuclear war after footage of his treatment taken by the US military was shared across the world. After joining a youth group of survivors, he became an activist and continued sharing his story until close to his death. He was appointed chair of the Nagasagi Atomic Bomb Survivors Council in 2006 and co-chair of the Japan Confederation of A- and H-Bomb Sufferers Organizations in 2010.

Joined Tokyo Shibaura Electric, the predecessor of Toshiba, in 1961 and spent many years at the company’s US operation. After taking over as Toshiba president in 1996, he used his rich international business experience to revamp the firm and strengthen its portfolio abroad. He became Toshiba chairman in 2000 and continued to influence management even after his tenure ended, making him a suspect when an accounting scandal at the company came to light in 2015. While chairman of the Tokyo Stock Exchange, he oversaw the response to several disruptive computer malfunctions and other issues. He became president of Japan Post in 2013 and oversaw the stock listing of the firm’s postal, financial, and life insurance operations.