Fly Me to the Moon: Billionaire Maezawa Yūsaku Prepares to Blast Off

Japanese businessman Maezawa Yūsaku has made global headlines as the prospective first commercial passenger to fly around the moon. On October 9, the billionaire founder of the fashion-retail website Zozotown held a press conference at the Foreign Correspondents’ Club of Japan in Tokyo.

A View of the Earth

Maezawa spoke animatedly about his trip to space, scheduled for 2023. As well as getting close to the moon, he is excited about seeing the Earth in full view. “Just thinking about how I’ll feel when I see it with my own eyes makes the tears well up.”

He also talked about the previously disclosed #dearMoon project to take artists with him off-planet. Although he said that they might be musicians, painters, film directors, or fashion designers, he admitted that as of now, “we don’t have anyone in particular.” When quizzed about whether his actress girlfriend Gōriki Ayame would have a place, he only said “if she has a role to play.” His main criterion? “I’d like to invite creators who want to make the world a better place through their works.”

When it comes to the training required for space travel, Maezawa said that the trip organizer, the American company SpaceX, has told him that it shouldn’t be too challenging. He also stressed his trust in the company and its CEO, Elon Musk, when it came to the safety of his journey. By arrangement with SpaceX, he did not reveal the cost of the trip. 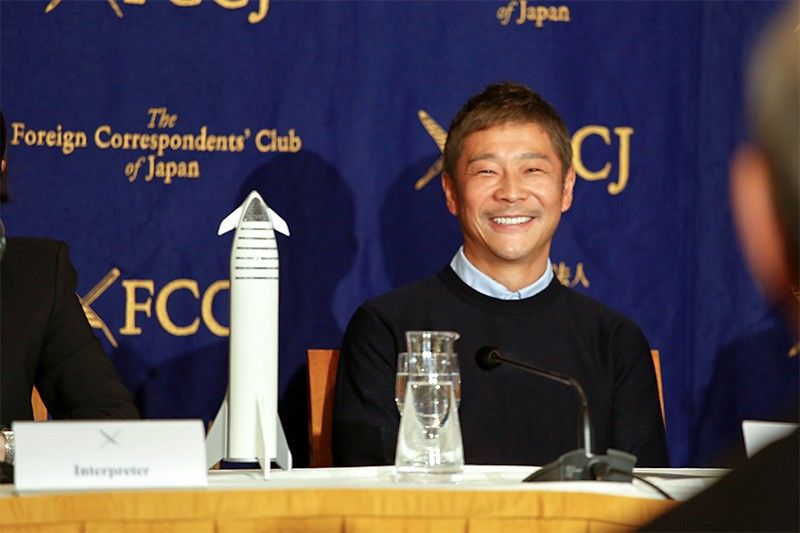 Maezawa smiles at the press conference.

Maezawa started out as a musician, playing the drums in a punk band he first joined in high school. He founded the company Start Today in May 1998 at the age of 22, based on an import CD and record mail-order business he had earlier established. Three years later, he quit the band to concentrate on business. Start Today made its debut on the Tokyo Stock Exchange Mothers market for start-ups in 2007, upgrading to the First Section in 2012. This month the company was renamed Zozo after its popular Zozotown website. Its success has made Maezawa’s one of Japan’s wealthiest entrepreneurs. In 2018, Forbes listed him as the country’s eighteenth richest person.

He has become known as an art collector, making his biggest splash with a $110-million purchase of an untitled painting by Jean-Michel Basquiat in 2017. This is the highest-ever price for a work by an American artist. He has also drawn attention for open statements about his private life, as when he tweeted that he was dating Gōriki. 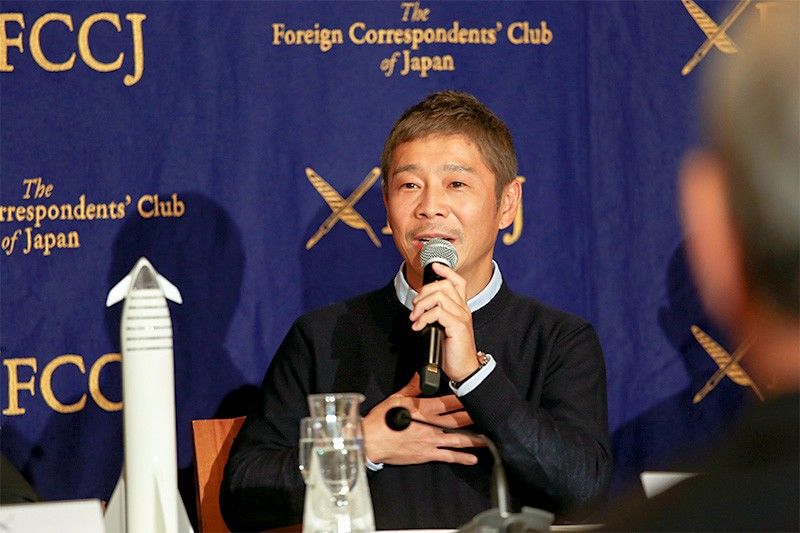 Toward Closer Ties with Musk?

The collaboration with the flamboyant Elon Musk in this unprecedented undertaking overturns the stereotype of the reserved Japanese businessman, and Maezawa has burst suddenly into the global spotlight as a success story who breaks this mold.

At the Tokyo press conference, Maezawa found time to talk about his business. This included discussion of the Zozosuit, a bodysuit that customers can use to order made-to-measure clothes. Musk has apparently suggested it could be used in making his first passenger’s space suit. Maezawa expressed an interest in a closer business relationship with Musk, working in areas such as electric vehicles as well as space.

(Originally published in Japanese on October 15, 2018. Banner photo: Maezawa Yūsaku at the #dearMoon press conference at the Foreign Correspondents’ Club of Japan in Tokyo on October 9, 2018. © FCCJ.)