Society Dec 30, 2018
The last full year of the Heisei era saw the loss of some major Japanese figures. We take a look at a few of the people who passed away in 2018.

As an animated film director and a cofounder of Studio Ghibli, Takahata was one of the core figures in the history of anime. He was born in Mie Prefecture on October 29, 1935. After graduating from the University of Tokyo, where he studied French literature, in 1959 he took a position at Tōei Animation, where he worked alongside the gifted animator Miyazaki Hayao. After leaving Tōei the two would continue to work together as director and artist on animated series for television; in 1972 Takahata directed Panda kopanda (Panda! Go Panda!) with Miyazaki as the writer.

In 1985 Takahata launched Studio Ghibli with Miyazaki. The first film he directed there was the 1988 Hotaru no haka (Grave of the Fireflies), inspired in part by his own wartime experiences as a child. He remained a central figure at Ghibli up through the last film he directed there, the 2013 Kaguya-hime no monogatari (The Tale of the Princess Kaguya), nominated for an Academy Award for its unique aesthetic approach. In 2015 he received the Order of Arts and Letters from the French government, a sign of the high global esteem he won during his half-century career. 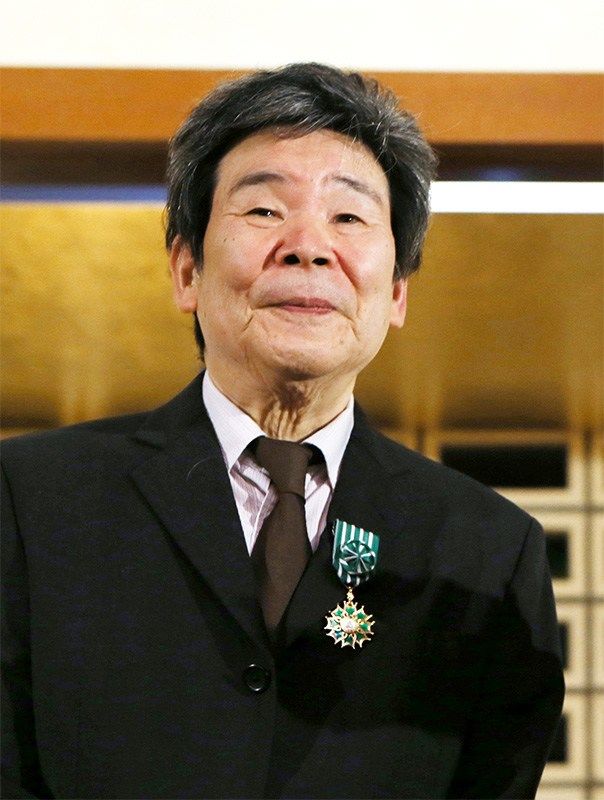 Takahata pictured on April 7, 2015, after receiving the French Order of Arts and Letters. (© Jiji)

The tetsujin (iron man) of Japanese baseball, Kinugasa was born on January 18, 1947. Raised by his mother (he never met his father, an African-American serviceman stationed in Japan), he began his baseball career at Heian High School in Kyoto, catching for the team twice at the Kōshien national tournament. In 1965 he was signed by the Hiroshima Tōyō Carp, where he played through the 1987 season. Playing mainly at first base and third base, he became legendary for his toughness—taking the field even with injuries as serious as broken bones—and racked up 2,215 consecutive games played, beating Lou Gehrig’s Major League record of 2,130 games in 1987. His global record would stand until Major Leaguer Cal Ripken Jr. broke it in 1996.

After retiring from the game in 1987, Kinugasa worked as a sports commentator. In that year he became the second baseball player, after Ōh Sadaharu, to receive the People’s Honor Award from the prime minister. In 1996 he was inducted into the Japanese Baseball Hall of Fame. 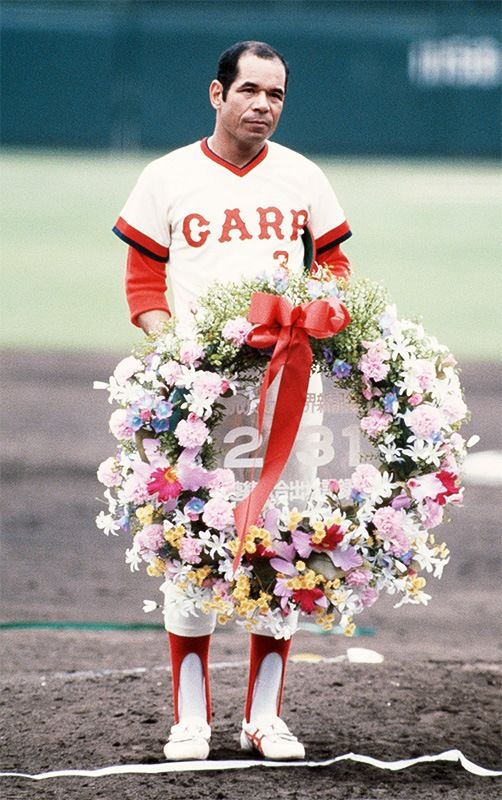 Kako was born in Fukui Prefecture on March 31, 1926. After World War II ended, he found himself working for a company while spending his weekends touring war-devastated areas sharing his own kami-shibai, spoken tales accompanied by large-format illustrated cards, to entertain children. This artistic outing inspired him to make his debut as a picture book writer in 1959.

While his works have not been broadly distributed in foreign language editions, generations of Japanese children grew up with his books in the Daruma-chan (Little Daruma) series, Karasu no pan’ya-san (Mr Crow’s Bakery), and countless other illustrated titles. Over a vigorous career that lasted into his nineties, he put out over 600 books in all. 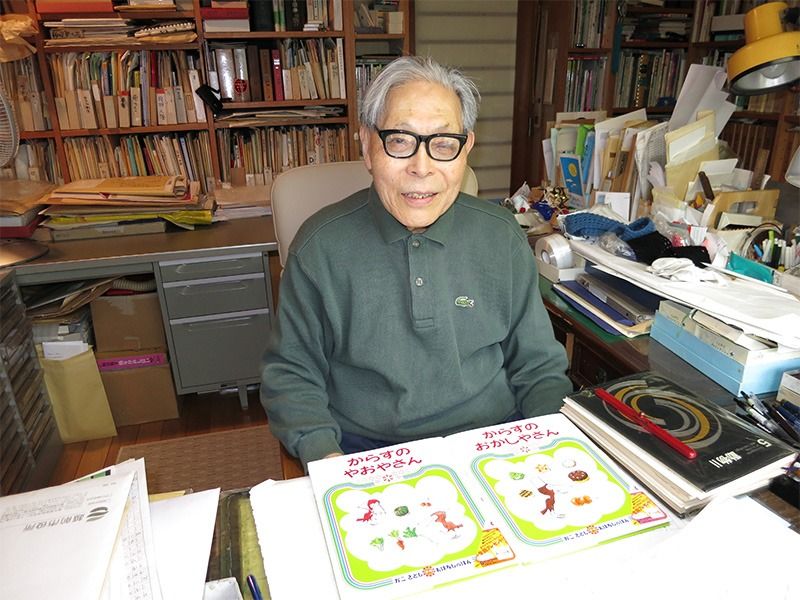 Born in Naha, Okinawa, on October 2, 1950. He was interested in politics from an early age. After graduating from Hōsei University in Tokyo, he returned to Okinawa, where he worked for a construction firm before winning seats on the Naha city assembly in 1985 and the prefectural assembly in 1992.

In 2000 Onaga was elected mayor of Naha, a post he would hold until 2014, when he won the gubernatorial election. He campaigned on a platform opposing the move of the US Marine Corps Air Station Futenma from the city of Ginowan to Nago, also in Okinawa. As governor, this position placed him in opposition to the national government; in the last months of his life, as he battled pancreatic cancer while still in office, he revoked the permission issued by his predecessor in office, Nakaima Hirokazu, to reclaim land in the Henoko district of Nago for a replacement facility. Following his death on August 8, former House of Representatives member Tamaki Denny took over the governorship, pledging to continue Onaga’s policy pushing for the cancellation of the Nago construction. 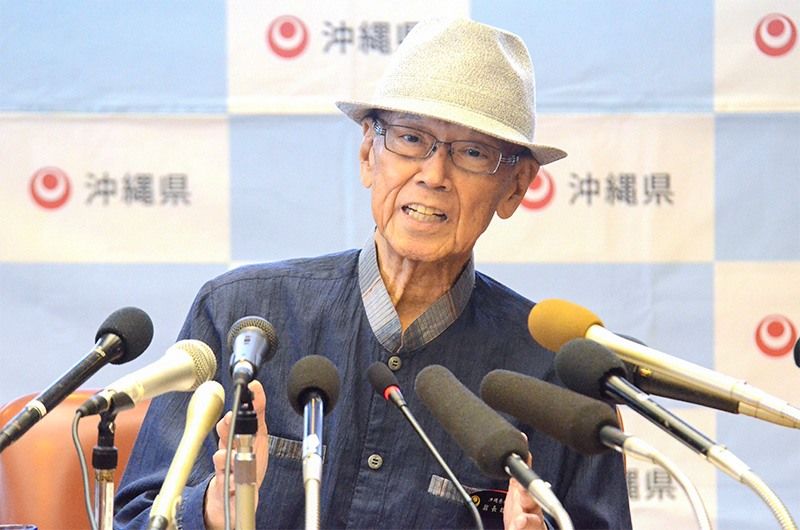 A visibly weakened Onaga appears in his last press conference on July 27, 2018, to revoke prefectural permission for the move of the Futenma air base from Ginowan to Nago. (© Jiji)

Born on May 8, 1965. Sakura made her debut as a manga artist in 1984, while still a junior college student. After graduation in 1986, she joined the publisher Gyōsei, but quit after a matter of months to pursue her art career in earnest. In the same year she began serializing what would be her signature work, Chibi Maruko-chan, in the magazine Ribon.

Maruko, the third-grader protagonist of the series, was patterned on the author’s own childhood experiences. The warm relationships among Maruko, her family, and her quirky set of friends and Sakura’s deft comedic touch won the work a wide following. In book form, Chibi Maruko-chan would sell more than 32 million volumes; volume 17, which closes out the written narrative, hit shelves in December 2018.

The stories also became a wildly popular TV anime series that aired in 1990–92 and again from 1995 to the present day. Chibi Maruko-chan was popular among international audiences as well. Sakura was also an accomplished essayist, publishing dozens of volumes during her career, with several of them hitting the million-copy mark. 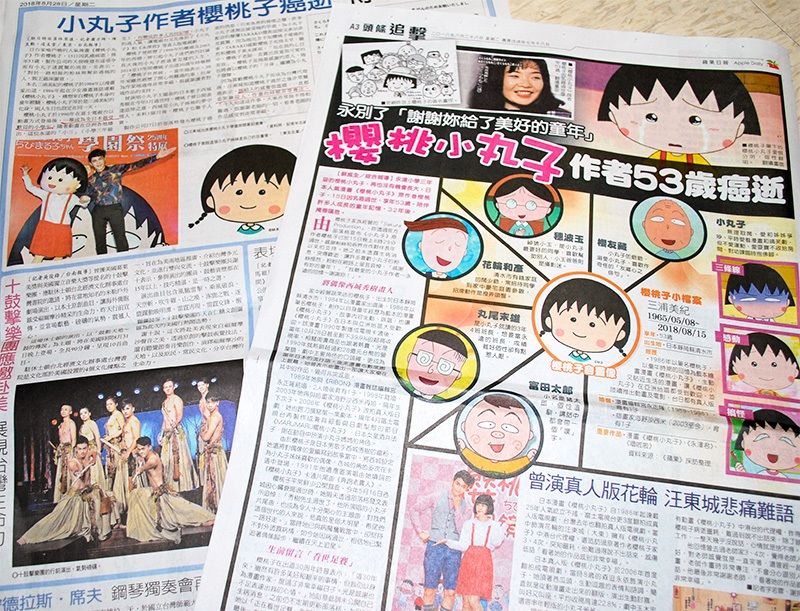 A newspaper in Taiwan, where Sakura’s work has a considerable following, reports the creator’s death in its August 28 edition. (© Jiji)

Born Nakatani Keiko on January 15, 1943, in Tokyo. In 1961 she joined the Bungakuza theater troupe to launch her performing career, taking the stage name Yūki Chiho. She went on to star in several popular TV drama series, including Jikan desu yo (It’s Time!) and Terauchi Kantarō ikka (The Family of Terauchi Kantarō), winning plaudits for her portrayals of aged characters despite her youth.

In 1977 she took part in a televised auction program for charity. Having “nothing of value to sell,” she put her stage name on the block; after it left her hands she thumbed through a dictionary to choose appealing characters to create her new performing name, meaning something like “various trees come together to grow as a rare wood.”

On the big screen, she won fame for performances in films like the 2007 Tōkyō Tawā: Okan to boku to, tokidoki, oton (Tokyo Tower: Mom and Me, and Sometimes Dad) and the 2012 Waga haha no ki (Chronicle of My Mother). She worked with the director Koreeda Hirokazu on several films, receiving the best actress award at the Three Continents Festival in Nantes for the 2008 Aruite mo aruite mo (Still Walking). She also starred in Koreeda’s 2018 Manbiki kazoku (Shoplifters), which won the Palme d’Or at the Cannes Film Festival.

(Originally written in English. Banner photo: Actress Kiki Kirin at a November 26, 2013, award ceremony for the Vogue Japan Women of the Year. © Jiji.)