Energy Politics in Japan and Germany

The debate about Japan’s future energy policy has intensified in recent months. Germany is often discussed as a possible point of reference for Japan in this context. In October 2012, Ozawa Ichirō of the People’s Life First Party insisted that his party’s objective of phasing out nuclear energy in Japan within ten years by generating an equivalent amount of renewable energy was “not unrealistic,” citing the example of Germany. 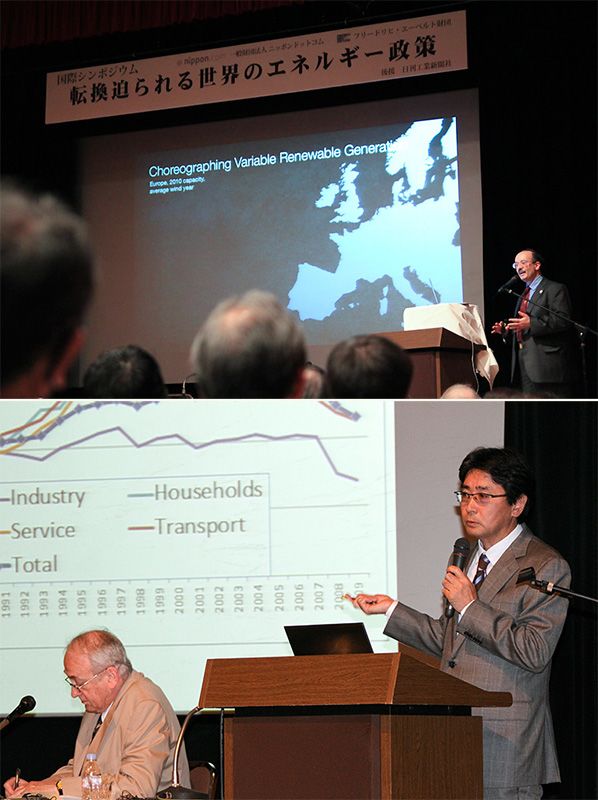 Kajiyama Hisashi talks at the symposium “Global Energy Policy at a Crossroads.”

Kajiyama Hisashi of the Fujitsu Research Institute, one of the speakers at a symposium on energy issues hosted by Nippon.com and the German Friedrich Ebert Foundation in October 2012, recently published a study (Japanese only) on Germany’s energy policies. In this, he concluded that Germany’s “energy shift” has already massively strengthened German economic competitiveness, and will in all likelihood continue to do so in the years to come.

In Germany, renewable energy use has surged over the last decade since the Renewable Energy Law was passed in 2000. The share of renewables in the German energy mix recently surpassed 25% and is expected to reach 40% in 2020. This will not only make it possible to phase out nuclear power by 2022, but will also allow Germany to reduce its dependence on imports of coal and other fossil fuels.

The Many Advantages of Renewable Energy

After a series of public discussions about the pros and cons of this policy, a broad consensus has developed in Germany that the pros by far outweigh the cons. First of all, increasing renewables makes it possible to phase out nuclear power and reduce the risk of a major disaster. This is also the only way to put an end to the accumulation of nuclear waste. Like Japan, Germany has still not found a solution for dealing with its nuclear waste.

Second, renewables strengthen energy security by eliminating the need to import fuel. This reduces dependence on oil- and gas-producing countries, many of which are in unstable regions of the world.

Third, the increase of renewables stimulates technological innovation and creates employment. In the German case, the growth of renewables has helped to stabilize the economy over the last decade; almost 400,000 jobs were created in related industries.

Fourth, renewables contribute to the reduction of CO2 emissions and thus to an active climate policy. This hardly requires explanation.

Fifth, and probably most important, renewable energy is basically free. It is also unlimited. Solar and wind energy require initial investment—but the sun and the wind do not expect payment for the energy they provide. Furthermore, the risks of solar and wind power generation are much lower, particularly compared to nuclear power. In the long run, these factors will clearly lead to lower electricity prices. Right now, the initial investments require the so-called Feed-in Tariff (FIT). In Germany, however, as a result of the FIT and the subsidies for renewables, the additional cost for an average family is no more than about €5–6 per month (¥500–600), or €60–70 a year. Compared to the recent 8.46% raise in electricity prices in Tokyo—which had nothing to do with stimulating the growth of renewables—this seems quite moderate, and much easier to explain to the public, which is strongly in favor of phasing out nuclear power and replacing it with renewable sources of energy. German households spend only 2–3% of their monthly outgoings on their electricity bills, according to the German Renewable Energies Agency (see table below). An increase of €5-6 per month should therefore not have much of an impact on most household budgets.

Adapted from a table provided by the Friedrich Ebert Foundation based on data published by Agentur für Erneuerbare Energien (Renewable Energies Agency).

Renewable Energy: A Golden Opportunity for Germany and Japan

Lastly, we should remember that Germany is not an isolated example. Renewables are a major trend worldwide. In 2011, renewables accounted for almost half of all newly installed energy-generating capacity worldwide. In the EU, they accounted for more than two-thirds. Renewable energy resources have been identified by many governments, investors, power companies and even military forces as the most reliable and promising future energy resource. For Germany and Japan, it is important not to miss out on the opportunities on offer. Some voices describe both countries as “poor in natural resources.” This is true for fossil fuels, but both countries are rich in renewable energy resources. Fossil fuels made important contributions to the development of human societies in the nineteenth and early twentieth centuries. In the twenty-first century, the era of fossil fuels is approaching its end. Japan and Germany should look to turn this to their advantage. Rather than worrying about a lack of resources, both countries should tap their rich reserves of renewable energy resources and lead from the front in developing new technology. This will help them reduce their dependence on imports, and thus strengthen national security.